Amelie The Musical Is Here To Spread Joy

Amelie The Musical is the theatrical equivalent of cracking the top of a crème brûlée.

Sweet, comforting, and oh so French, in all the best ways.

The movie is now celebrating its 20th anniversary (!), and it’s aged extremely well. The character, the story, the whimsical, sepia-toned, cosily soul-nourishing warmth of it all is almost too much.

So it’s quite good news that it’s been adapted for the stage by Craig Lucas, a man whose life makes for an incredible story in its own right (he was found abandoned as a baby in a car in Atlanta, was adopted by a highly conservative FBI agent, and went on to become an openly gay musical theatre writer). He wrote the original book for the 2015 version in Berkely California, which then moved onwards an upwards to LA, Broadway, Tokyo, and Munich.

Taking on the feedback from the shows, it’s now been transformed for the London stage, with new orchestrations, an expanded repertoire of songs, new staging, the works. And it has worked indeed, with critics lapping it up, and earning it noms for three Olivier Awards and one Grammy. 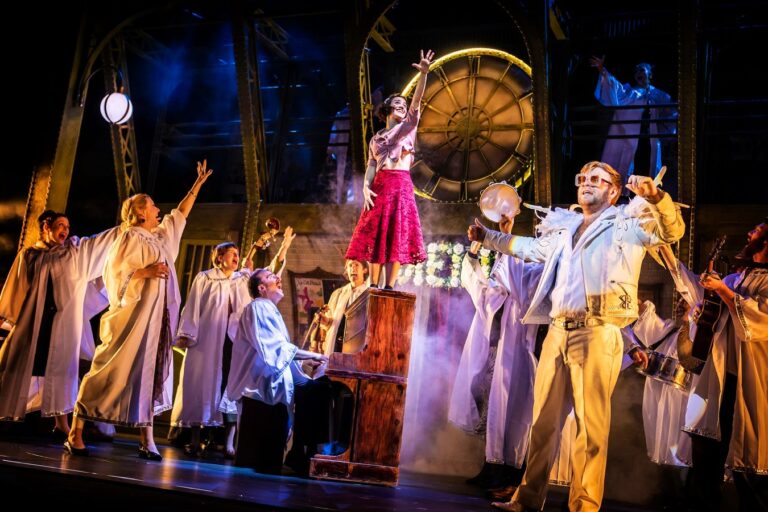 The story remains true to the film – a young girl who quietly intervenes in the lives of others in a guerrilla campaign of clandestine happiness spreading – but now it includes musical moments with Elton John, and a cast who pick up instruments and play onstage. The whole stage is a dynamic, moving thing, with ingenious props and surprising shifts in perspective, all powered by a whole lot of exuberant, boisterous energy. Lead actress Audrey Brisson has been particularly singled out for her impressively shoe-filling performance.

It’s playing in the Criteiron, a well-preserved Victorian theatre which treads the line of being grand in atmosphere, but intimate in scale (speaking of which, the seating is allotted automatically in order to socially distance, at least until the government says they can stop). It also happens to be slap-bang in the middle of Piccadilly, so if you’re feeling frisky, you can head to The Palomar for a pre-show dinner, or keep things suitably French at Brasserie Zedel, then drop into one of Soho’s bars afterwards.

And if you want to keep the musical jubilation going?

The Piano Works West End is playing your song.