Have you heard the one about the three Jews fighting savagely over the personal effects of their recently-deceased Holocaust-survivor grandfather?

There’s Daphna – a fast-talking proudly Zionist force of nature. There’s Liam, her cousin and temperamental opposite, who’s interested in Japanese pop-culture and turns up with – shock, horror – his gentile girlfriend! And then, quietly, on the sidelines, there’s Jonah.

Harmon’s script is full of barbed, brutal one-liners, and the piece rattles along at a breakneck pace. It’s also, at times, extremely moving and powerful – but for all the heavy-going themes being explored, the piece manages to inject some much needed silliness and into the family’s conversations. 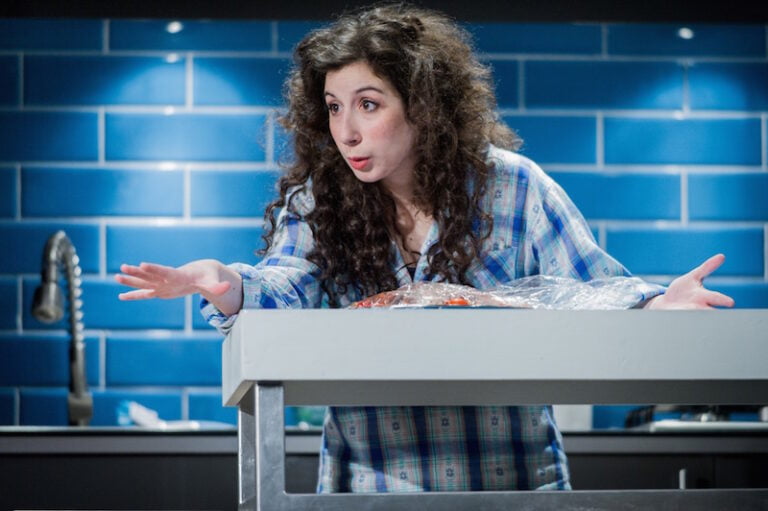 The standout performance comes from Charlie Beaven playing Jonah, who steals the show as the slightly passive, muted observer, and provides a quiet counterbalance to some of the play’s louder and more abrasive elements (enough already!).

Whilst some reviewers struggled with the show’s kvetching and histrionics (have they ever seen a Jewish family argument?) the production received ★★★★ in TimeOut and the Evening Standard, the latter of whom praised it for “taking the play’s many peaks of hysterical emotion and brutal wit like a series of ski jumps”, and praised it as “bloody smart and bloody funny.”

And, crucially, whilst Bad Jews is an exploration of Jewish identity, sure, it’s also a play about family – and, as the loud, bickering, argument unfurls and the piece builds to its cataclysmic finale, you don’t have to be Jewish to appreciate the dynamics at play. It is, as TimeOut said; “a play that looks more universally at grief, loss and legacy and how easy it is to lose sight of other people.”

NOTE: Bad Jews – playing at the Arts Theatre until September 25th. You can find out more, and get tickets right here.

Want dinner nearby? Here are the best restaurants in Soho…