NOTE: Boulevard is currently closed. We’ll update this when it reopens…

Soho has a new theatre.

It’s making quite a scene.

It’s called Boulevard, and it’s named after the striptease venue that used to inhabit the same space in Walker’s Court (and which itself replaced a brothel). Now, that small patch of central London has had £40m-worth of rehab poured into it, and this new theatre is the keystone.

It’s all quite impressive both inside and out. The main auditorium has been cleverly designed so that it can be reconfigured at the drop of a hat, with both stalls & a balcony that move independently of each other, and can be rotated 360-degrees. The stage itself can also be moved up and down, and the chairs are free-standing (unlike traditional fixed-row theatre seating). All in all, it means that the space can be almost unrecognisably transformed in just a few minutes – the idea being that you could watch a play, pop down for dinner, and come back up for a little light music into a completely different space. 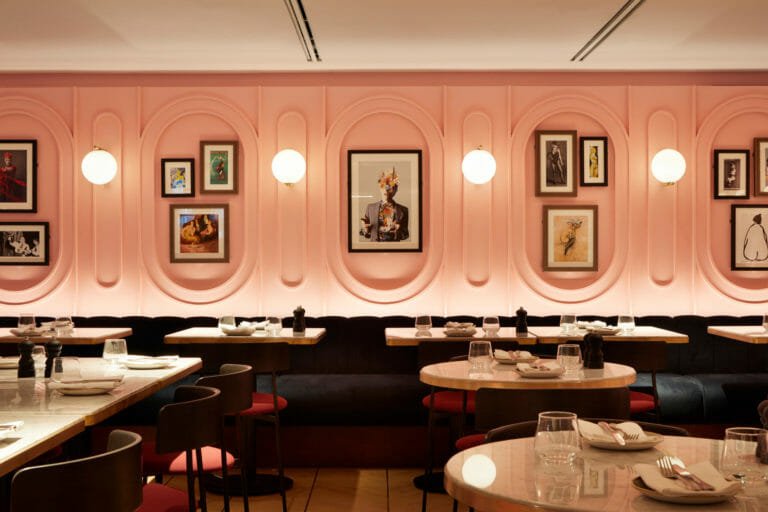 The plays that are christening the space include Ghost Quartet (a hauntingly quirky musical from three time Tony Award-nominee Dave Malloy); The Sunset Limited (from iconic writer Cormac McCarthy, also responsible for No Country for Old Men, The Road, etc.); and The Effect (an examination of chemical love by award-winning writer Lucy Prebble).

And that dinner that we mentioned? It comes from the new Art Deco-style restaurant, which is bathed in pink and dressed with fetching marble tables. Your pre-theatre menu will be guaranteed to get you out in time for the show, and will include modern British dishes like whiskey cured mackerel with fennel & beetroot; some chermoula baked aubergine with butterbean puree & dried heritage tomatoes; and a warm chocolate, olive oil & almond cake.

And making full use of that nifty shape-shifting theatre space, they’re also holding regular Lates every night from Wednesday to Saturday, with jazz nights, comedy shows, and cabaret from The Black Cat (among others) – and on Sunday the space will change yet again to host talks, podcasts, concerts, and poetry recitals.

NOTE: Boulevard is currently closed. We’ll update this when it reopens…

Like theatre in Soho? It’s a long shot, but the Soho Theatre might be worth checking out.