If you’re after food for thought – see Hungry.

Surely the most accomplished play to have landed in the Soho Theatre’s electrifying Upstairs space – and perhaps one of the finest pieces of theatre to have arrived in Dean Street in the last five years – Hungry is a taut two-hander, tracing the journey of a relationship via two points in time; the initial workplace meet-cute, and a later, more painful chapter in a pairing that is clearly starting to unravel.

Bex is a scrappy waitress, Lori a boozy professional chef – and so food becomes the play’s nexus point, through which power dynamics, differing value systems, gentrification, and the colonial appropriation of cuisines and cultures are all explored. 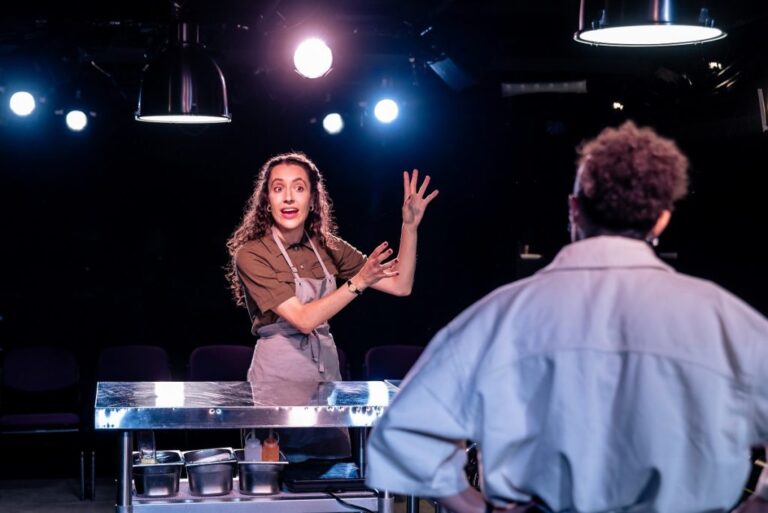 Eleanor Sutton is mesmerising as Bex – who goes from guileless and self-effacing to bubbling with rage – and Melissa Lowe is equally compelling as Lori, full of good intentions (and, frequently, slightly too much booze) but unable to see where her overreaching becomes tone deaf or unhealthy.

Chris Bush’s writing is dextrous and scalpel-sharp – articulately presenting uncomfortable themes to the Soho’s (mostly white, mostly middle-class) audience, without ever veering into the realm of the polemic.  Equally deft is Lydia Denno’s versatile set – two wheeled stainless steel kitchen counters, which facilitate the move between past and present, clanging together with surgical precision.

A Paines Plough and 45 North co-production, Hungry is at the Soho for three weeks before heading to the Edinburgh Fringe, where it will play in Paines Plough’s Roundabout space (undoubtedly the finest theatre venue in the Fringe).

For a play about food – with an ending that includes a mouth-watering live culinary set piece – the play is bittersweet, and many of the truths unpalatable. But, as a theatrical experience, it’s delicious. Give it all the (Michelin) stars.

NOTE: Hungry plays at the Soho Theatre until 30th July. You can find out more, and get tickets right here.

Hungry? Head to one of Soho’s best restaurants…