We don’t want to be dramatic…

…so we’ll leave it to the professionals taking to the stage at London’s most iconic al fresco arts space, the Regent’s Park Open Air Theatre, which is back open for business this summer.

Surprisingly for its size – it seats a cool 1,200 – it’s a place you wouldn’t really stumble across unless you knew it was there. Hidden away in a grassy corner of Regent’s Park, surrounded completely by trees, it’s more amphitheatre than theatre. A horseshoe of stadium-style seating envelops the stage, which – given that there aren’t curtains, drop-in scenery or wings like in a traditional theatre – is always constructed into creative and unusual sets. And yes, the whole theatre is left entirely open to the elements, making it a magical setting by night or day. 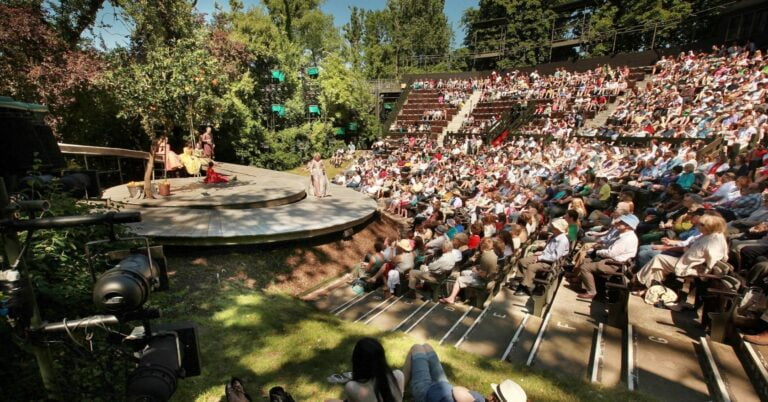 This summer, three main productions will be taking to the stage here, each with high-profile performers and creatives on board. Things kick off in May with Legally Blonde: The Musical, directed by Lucy Moss (the co-writer and director of the smash musical SIX); followed by a brand new musical adaptation of 101 Dalmatians starring the phenomenally talented Kate Fleetwood; and capped off with a new adaptation of the Greek tragedy Antigone, written by the playwright behind the hugely well received Barber Shop Chronicles, Inua Ellams. There’s also bar on site, as well as a café, some covered dining, a grill, and a pre-theatre drinks service. They even have a dedicated lawn just outside the theatre for picnicking, and you can bring your own food from home.

Which is good. Most theatres usually have a blanket ban.

NOTE: Regent’s Park Open Air Theatre’s summer season runs from 13th May – 24th September. Tickets start at £20 for the main productions, while tickets for the one-off shows (comedy, cabaret & film screenings) go on sale on 28th April. You can find out more, and book, at their website right HERE.