But then again, that’s kind of the Royal Court’s whole thing. Since 1956, it’s been London’s theatre for championing new writing. The first play produced there was John Osborne’s Look Back In Anger, now considered to have kickstarted the era of modern British drama. In 1960, their upstairs studio opened with a little number called The Rocky Horror Picture Show. And in the intervening 60 years, they’ve premiered work by the likes of Jez Butterworth, Caryl Churchill, Sarah Kane, and Jasmine Lee-Jones. 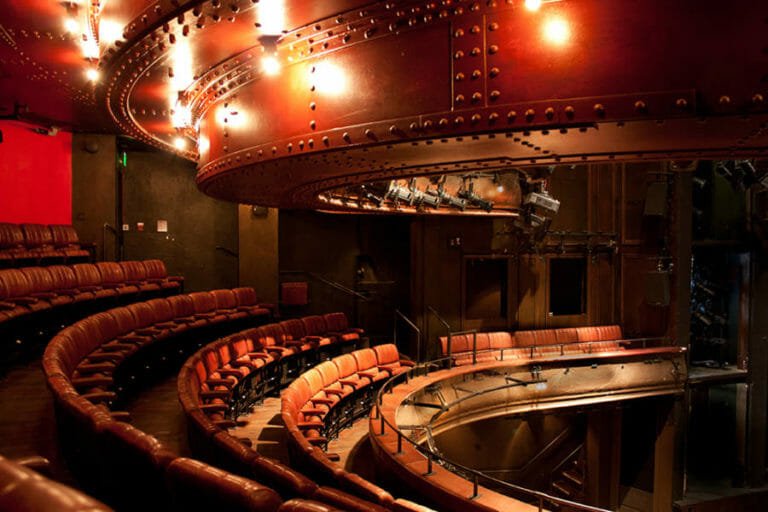 The Royal Court pulls in big names, showcasing new work by established playwrights that’s often considered too ‘out there’ for other theatres. But it’s dedicated to incubating new talent as well, with in-house residencies and programmes designed to increase accessibility in theatre. That goes for the audiences too, because a seat here goes for a fraction of West End prices, ranging between £14 and £49. On Mondays, there’s a limited number of £12 tickets – and if you’re stout of leg, you can try to bag a standing ticket for 10p. They go on sale an hour before every show.

The Royal Court’s a good spot to have in your arsenal of ‘cool, buzzy hangouts filled with artsy types’, whether you’re seeing a show or not. The basement bar and restaurant is a smart, brutalist-style space that serves up vegan dishes, burgers, cheeseboards and peanut butter brownies. By day, it’s a great spot to bring a laptop and get some work done; by night, it’s a bustling bar serving up craft beers, wines (picked out by Berry Bros & Rudd), and a gin that takes plastic out the ocean.

We’ll drink to that.

NOTE: The Royal Court Theatre is currently closed due to the pandemic, but they’re running a pop up bar and restaurant terrace outside. There will also be a series of promenade shows staged in November, called Living Newspaper. You can find out more, and book tickets, HERE.

Like theatre? Read our ultimate guide to getting cheap tickets