NOTE: The below doesn’t really include any spoilers, but if you really want to go in without any idea of what to expect and have clicked on this article in error, then quick, look at this nice collection of restaurants in Soho instead!

And they’ve really razed their game.

After an eight year absence (during which they were off wowing audiences in New York and Shanghai), the pioneers of large-scale immersive theatre have returned to the city, taking up residence across a pair of warehouses in a freshly redeveloped patch of Woolwich Arsenal.

Why should you be excited about this? Well, back before the word ‘immersive’ could be tacked onto anything to essentially mean ‘happening in real life’, Punchdrunk started making serious waves in theatre. They took the promenade format and ran with it, constructing vast sets for audiences to explore at their own pace, and throwing dozens of actors into the mix who weaved through those sets in an interconnected storyline. Their last London show, The Drowned Man, was a mix of dance and theatre based on the play Woyzeck, set over four floors of an abandoned post office sorting warehouse. And this time round, they’re tackling the ancient myths of Troy.

Punchdrunk’s strength lies in the depth of the immersion they create, and this show plays with metatheatricality more than their last. As you enter, you’ll pass by things that could belong to your world, or theirs. Unlike The Drowned Man, where a requisitioned goods elevator acted as a clear portal between fiction and reality, The Burnt City gradually bleeds into your periphery. And once inside, you’ll have free rein over an enormous playground of evocative sets, while wearing an anonymising mask that allows you to eavesdrop on conversations and become a voyeur in the characters’ lives. 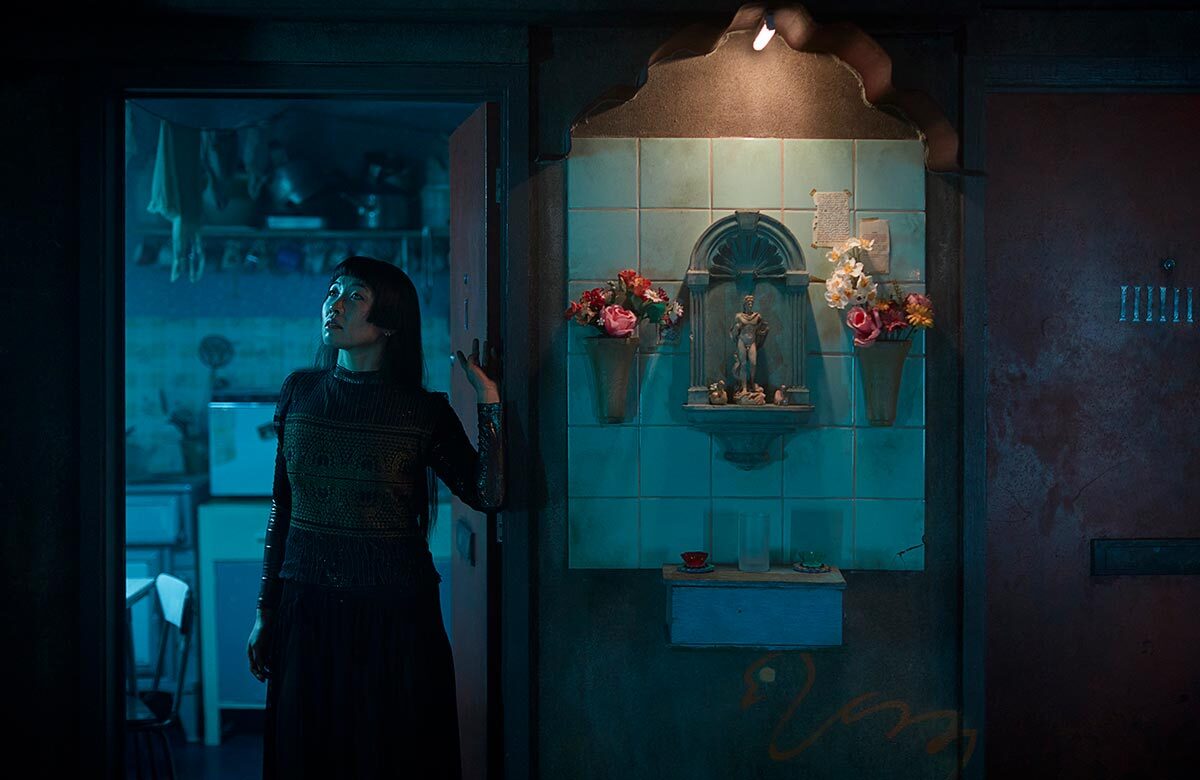 Obviously, the thrill of the show is uncovering hidden spaces for yourself, stumbling on moments between characters and dashing after performers through the labyrinthine sets that unfold in front of you like a lucid dream. Although the space feels less expansive than TDM, they’ve somehow managed to recreate the backstreets of an entire city, and the attention to detail within the spaces is incredible. You can pick up half-read books on someone’s bedside table, trawl through receipts in a corner shop, and see who’s checked in at the Elysium Hotel. The aesthetic is original and captivating, mixing references, countries and eras. The lighting is exceptionally atmospheric, and paired with the soundtrack that hangs in the air and the surreal, dreamlike actions of the performers, it makes for a unique, at times genuinely magical experience. Once more, they’ve succeeded in capturing what it would be like to step into a film screen.

During previews there didn’t seem to be many one-to-ones taking place, but this might change as the show evolves (or maybe we were just in the wrong place at the wrong time. Reading too many shop receipts, probably). The storytelling is also more reliant on dance, movement, fights and choreographed set pieces, using almost no spoken word, making the plot harder to pick up casually here than in TDM – so a brief scan of wikipedia wouldn’t go amiss before you go. That’s not to say you won’t get anything out of it without being familiar with the mythology – you could quite happily go and just enjoy the sensory decadence of it all – but untangling the relationships between characters and the significance of the locations is far easier if you already know that Clytemnestra is the Mycenean queen, and not something you should get tested for.

We’d hate to deprive you of the joy of discovery and serendipity, so we’ll say no more. But try every door, follow your nose, and never look a gift horse in the mouth…

The Trojans learnt that the hard way.

NOTE: Punchdrunk’s The Burnt City is running now. You can book your tickets right HERE (Woolwich residents can get tickets for £25).

Want to see something on a stage? Take a look at our guide to London Theatre Shows On Now