Today’s performance is brought to you by the phrase ‘Gentleman caller’, and scenes of pensive smoking.

Have you heard the news? The Glass Menagerie is on, and Hollywood’s very own Amy Adams, six-time(!) Oscar nominee and bona fide megastar, has come to town to play Amanda Wingfield, the faded Southern Belle and solicitous hostess with the mostest increasingly tragic and irrelevant memories of a better life.

It’s got the makings of a classic night at the theatre – and it is! Sort of. Under the auspices of director Jeremy Herrin, Tennessee Williams’ monumental work is reimagined as a wistful, delicate chamber piece, bathed in low, golden light, with the clutter of a family life surrounding the raised stage, and – perhaps appropriately enough, for a play about memory – it’s not quite like you remember it. 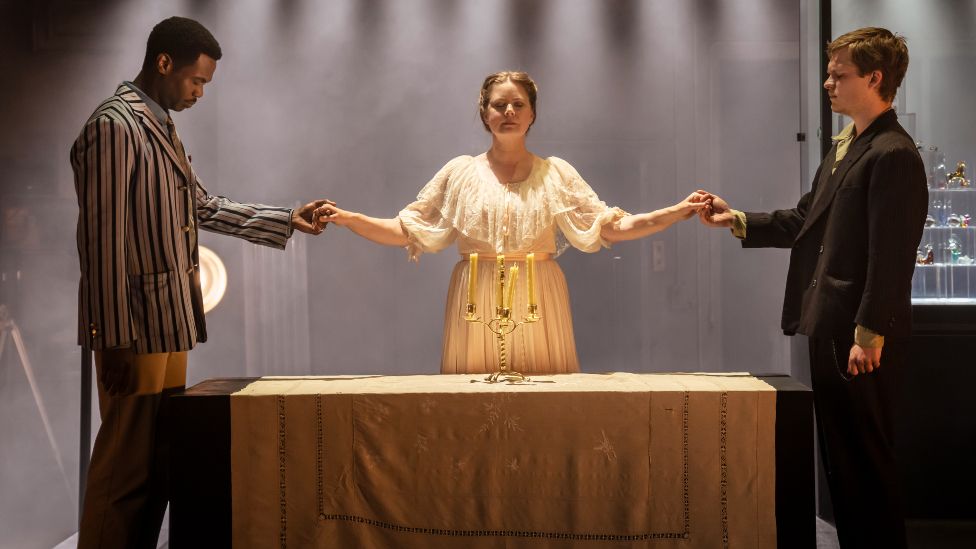 The part of Tom Wingfield, Amanda’s disaffected son, has been chopped up into two roles: Tom Glynn-Carney plays the younger man, whilst the older Tom who narrates and oversees the action is played by Paul Hilton, a melancholy presence who haunts the stage (and resembles CM Punk’s bookish brother).

Lizzie Annis, making an assured and impressive professional stage debut, plays Tom’s sister Lara, a reclusive self-described “cripple” and keeper of the titular menagerie. The play builds to Lara’s eventual encounter with the fabled, much-heralded gentleman caller, the flash Jim O’Connor – played with poise and charisma by Victor Ali – a candlelit encounter which doesn’t go to plan, and in which hopes (amongst other things) are shattered.

For those seeking Williams’ play at its punchiest and most devastating, look elsewhere – given the gentle, quietly affectionate tone of the production, it all ends in a way that feels strangely unresolved.

It’s a strange, subtle take on one of the world’s great plays, but it’s all there – poverty, hope, despair, frustration – and the ambiguities will sit with you long after the house lights have come back on and the smell of stage cigarettes (distinctively, uniquely disgusting) has finally left your nostrils.

As with Amy Adams’ Amanda Wingfield, there’s a fragile beauty here – if you know where to look for it.

NOTE: The Glass Menagerie is playing at the Duke of York’s theatre until 27th August. You can find out more, and get tickets right here.