The Bridge should, in theory, be the finest theatre in London.

The team behind it alone (Hytner and Starr – two of showbusiness’ most accomplished and fabulous Nicks) should make it a slam dunk. But then there are the comfortable seats! The incredible space! The genuinely life-changing St. JOHN doughnuts! But, for reasons unknown, the plays there often don’t feel like they live up to the building’s promise.

Not so with The Southbury Child, Stephen Beresford’s new drama. Finally, we have something that matches the expectations laid down by the venue. Here, triple Olivier-winner Alex Jennings plays snobby Anglican Vicar David Highland, who comes to blows with his Dartmouth flock when he stubbornly refuses to countenance Disney balloons at the funeral of a parishioner’s daughter. 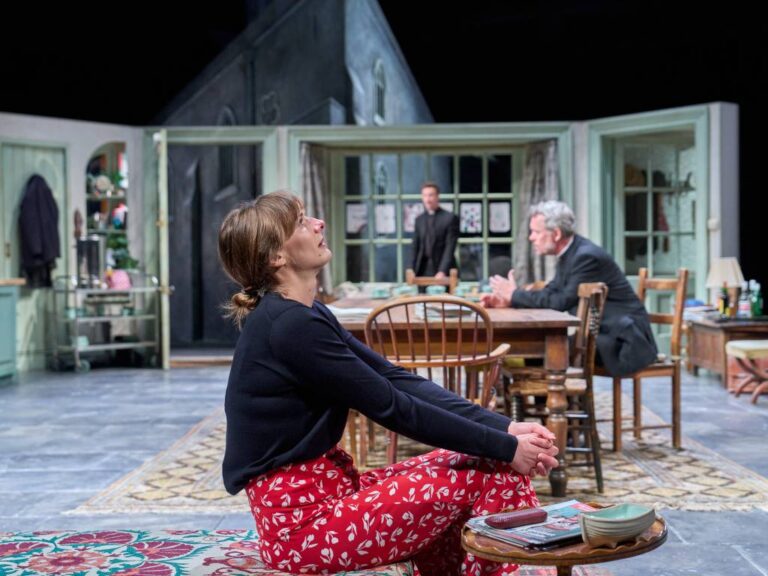 In the face of social media pile-ons, indignant outcries, and dogshit through the letter box, Highland remains intransigent, determined to uphold what he sees as the Church’s high standards (despite his own personal standards – which include an extramarital affair, and a drinking habit curtailed only by an over-the-limit car accident – being dubious at best).

It earned ★★★★★ in The Daily Telegraph, which described it as “The play of the year so far”, and likened Beresford’s darkly funny social realism to the writing of Alan Bennett, while also earning ★★★★ in The Times, which praised Jennings’ “majestic performance”.

The kitchen-table nature of the play – and the parochial setting – means it might feel a little old-fashioned for some tastes, and the slight implausibility of the stakes of balloon-gate rob the plot of a little of its urgency (though the arguments that ensue are compelling). But, if you’re on the hunt for a gentle, yet scalpel-sharp dissection of modern British life, then head to The Bridge and grab a ticket.

And a doughnut. Obviously.

NOTE: The Southbury Child plays at The Bridge Theatre until 27th August. You can find out more, and get ticket at the website right here.