The Best Carols & Christmas Concerts in London This Year

…and sound like it too, so we’ve hand-picked the best places to sing carols and listen to some Christmassy music across the capital this year:
–

This event’s a triple threat: 1) It’s taking place in an atmospheric factory space. 2) The ‘Nutcracker Suite’ in question is actually the jazz arrangement by the great Duke Ellington, and 3) It’s being played by the barn-storming Kansas Smitty’s big band, with brass for days. 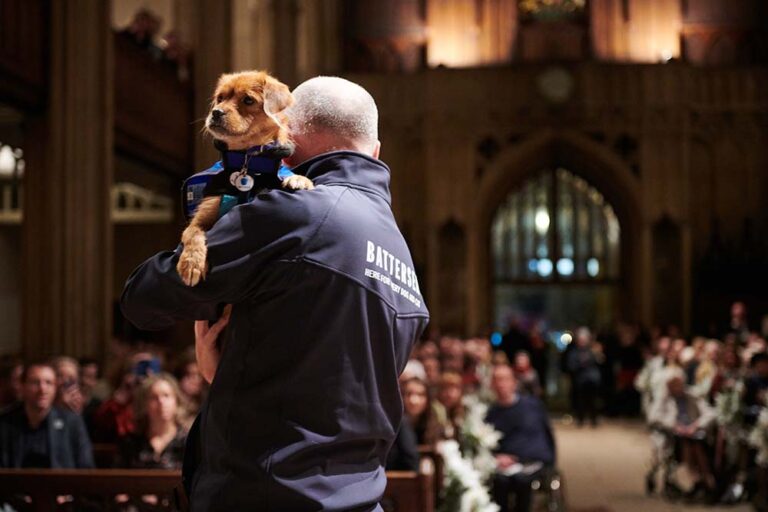 All the usual carols, mulled wine and mince pies you could want, with the key distinction of having a guard of honour formed by some of the canine residents of Battersea Dogs & Cats Home. 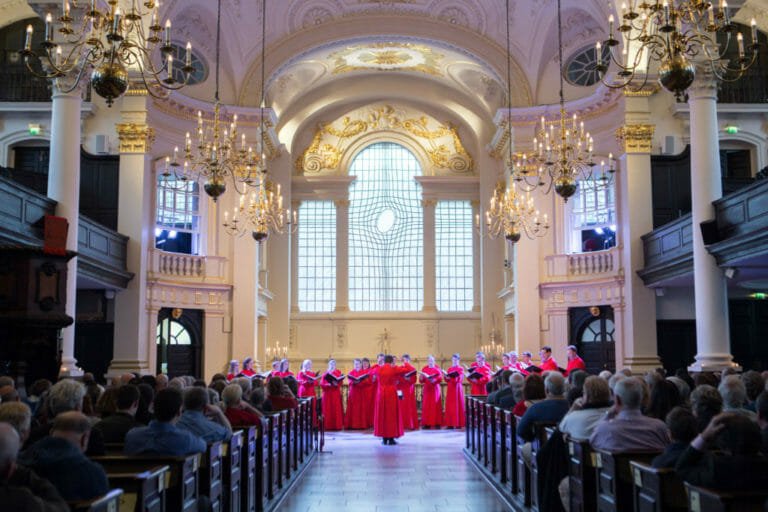 With a grandiose, candlelit setting just off Trafalgar Square, St. Martin-in-the-Fields is an impressive arena at any time of year. But at this particular time of year, it’s at maximum enchantment levels. There are Christmassy music recitals taking place throughout December, but the headliners are the candlelit carol concerts, happening most Friday & Saturday nights.

Carols at The Ned 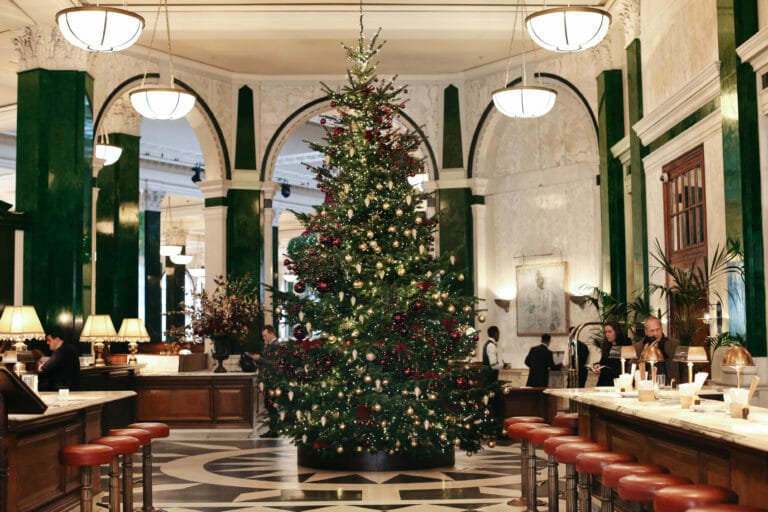 The cathedral-like interiors of The Ned make for a pretty epic setting for Christmas. This year, you can settle in for a Christmassy meal at one of their four restaurants; enjoy a festive afternoon tea; or soak up the dulcet tones of Gareth Malone’s choir while you enjoy drinks and canapés at The Nickel Bar, or a three-course dinner at Cecconi’s.

Christmas At The Movies

In what is probably the most efficient way to enjoy all of your favourite festive flicks in one day, the Philharmonia Orchestra are going to be playing through the theme tunes from some of the best, including Home Alone, Love Actually, It’s A Wonderful Life, and White Christmas. 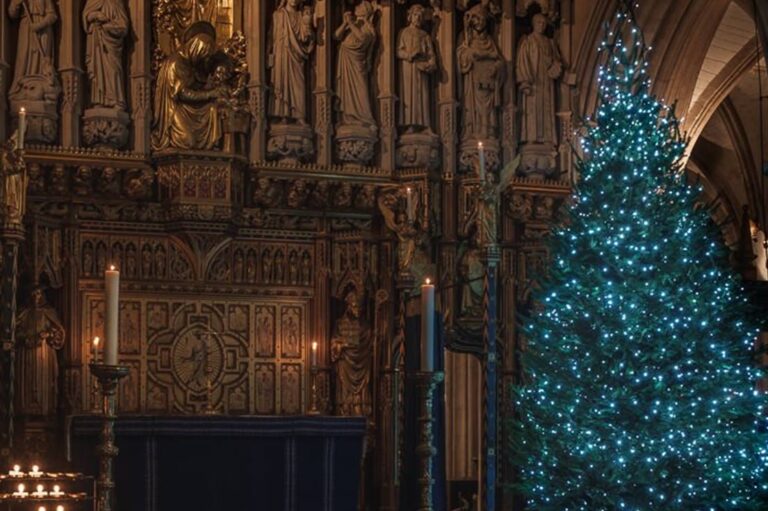 There’s plenty of carolling at Southwark Cathedral this month, including a free service with a speech from Sadiq Khan; the traditional Southwark Cathedral concerts with mince pies and mulled wine; a Marie Curie charity service with readings by Alison Steadman OBE and Sir Michael Morpurgo; and a casual lunchtime singalong with Christmas songs besides just carols. 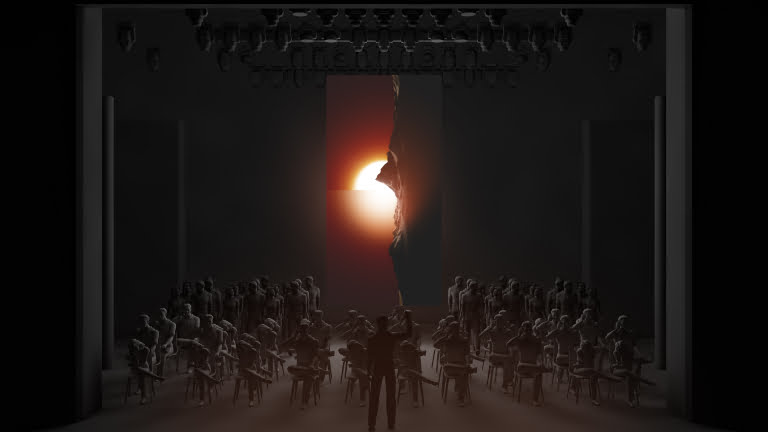 The original Messiah: Live Experience was attended by about five people, some cattle, and a couple of archangels. This one’s going to be on a pretty big scale, presenting Handel’s orchestral masterpiece in an all-new immersive format. It comes to us from the team at Immersive Everywhere (The Great Gatsby, Peaky Blinders: The Rise, etc), who’ll be employing some highly creative lighting, bombastic visual effects, and a showcase of imaginative choreography to bring the music to vivid life…

Every Wednesday in the run up to Christmas, Columbia Road‘s traders keep their doors open late for a little mulled wine-fuelled shopping. And to ensure the whole street is brimming with festive cheer, you’ll find singers holding an open air carolling sesh too. 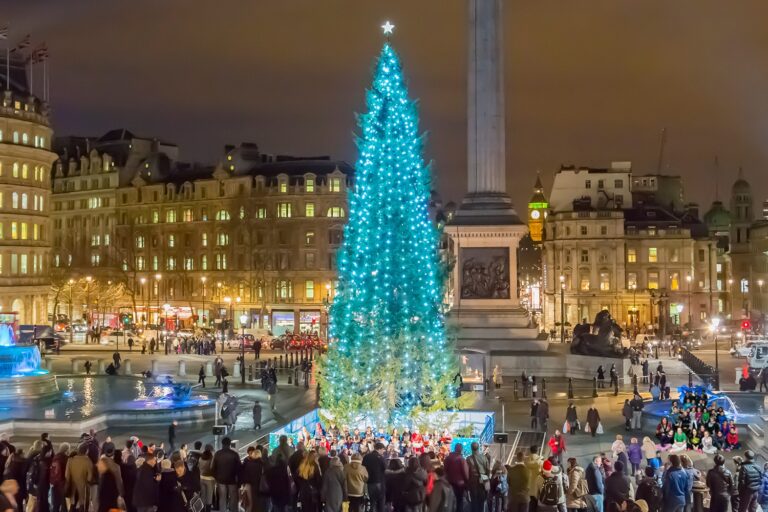 The towering Norwegian spruce in Trafalgar Square has been an annual gift to London since 1947. And as always, you can expect various community choirs to pitch up at its base to spread festive cheer with classic carols.

Christmas at The Royal Albert Hall 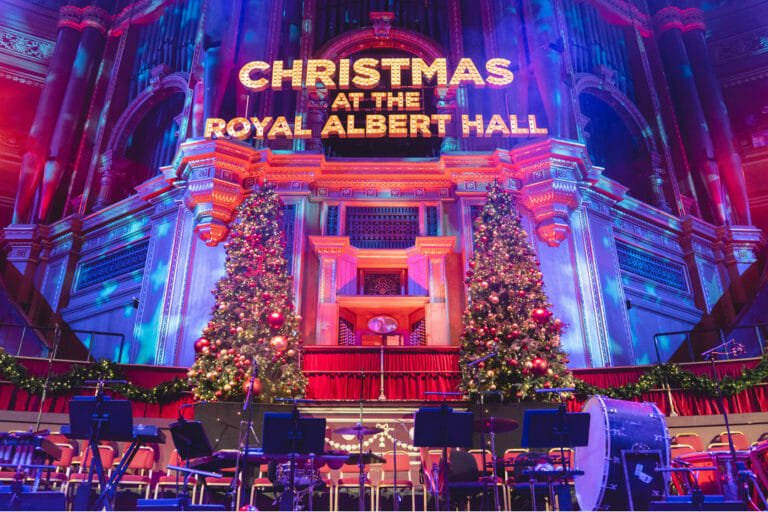 The RAH is holding far too many Christmassy concerts to list here, but they include A Christmas Gaiety with performances by drag artists Cheddar Gorgeous and Le Gateau Chocolat; a live orchestral play-along with Home Alone; big band nights; Christmassy jazz; Handel’s Messiah, singalong carols, performances by the London Community Gospel Choir, festive soul with Trevor Nelson and swing with Rick Astley; and The Nutcracker with Birmingham Royal Ballet. 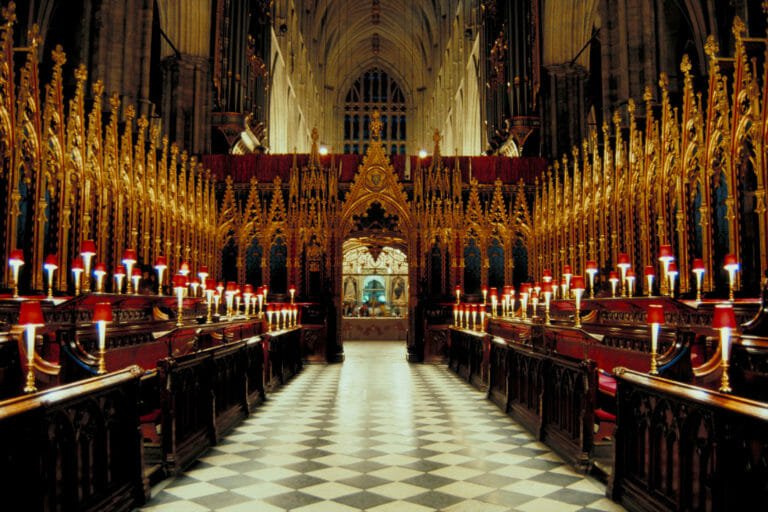 Join Elizabeth I, Charles Dickens and Sir Isaac Newton for a festive bonanza in an iconic setting. Granted, they won’t be doing much singing, but you and the Westminster Abbey choir will probably make up for it.

The Nightmare Before Christmas

Nothing says Christmas like listening to a live orchestra play “This Is Halloween”. And this film screening with live play-along is a particularly special one, because Danny Elfman – the film’s songwriter and singing voice of Jack Skellington – will actually be performing. 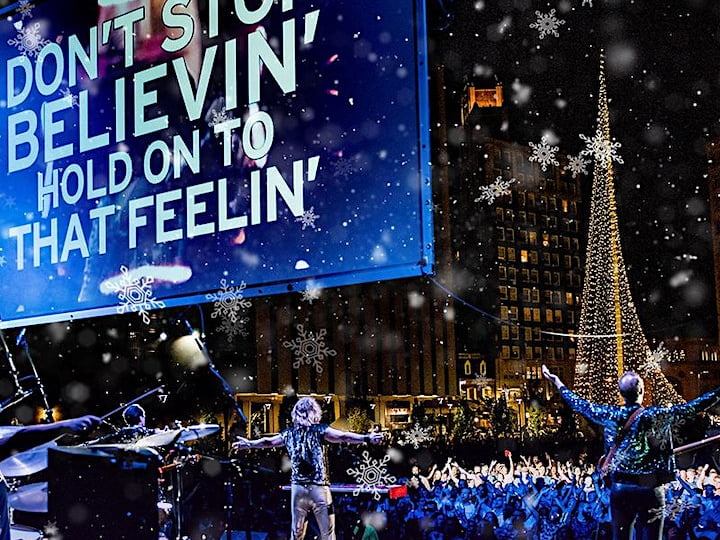 What is massaoke, you ask? Or, at least, we think you did, because we can’t hear you over the joyous crowds simultaneously singing along to some of the best songs ever written, played live on stage alongside projections of the lyrics and full-on pyrotechnics, creating one of the most euphoric mass-bonding experiences of your life. Maybe you just said ‘stop knocking my beer’. 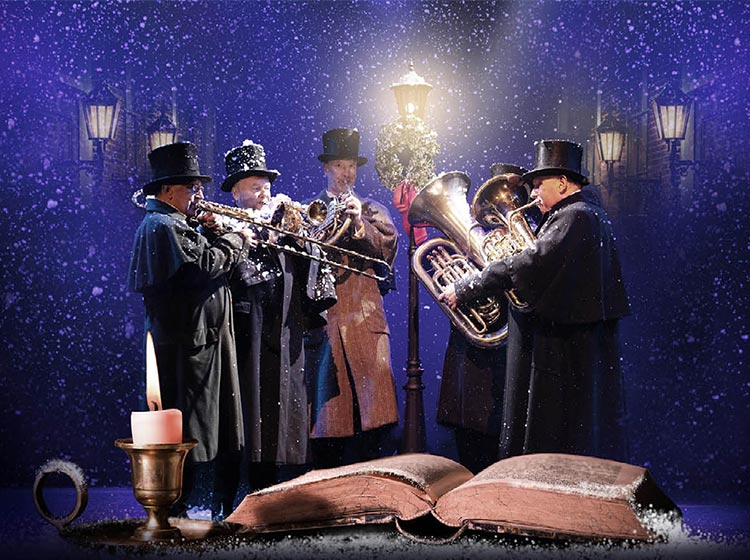 What the Dickens can you expect at this concert? Well, a load of Victorian Christmas carols played by a full brass band and the Mozart Festival Chorus, interspersed with snippets from A Christmas Carol presented by Stephen Mangan.

“True love lasts a lifetime.” This, on the other hand, lasts just over 2 hours – but with a live orchestra playing the soundtrack alongside the film, there are far worse ways to spend them. 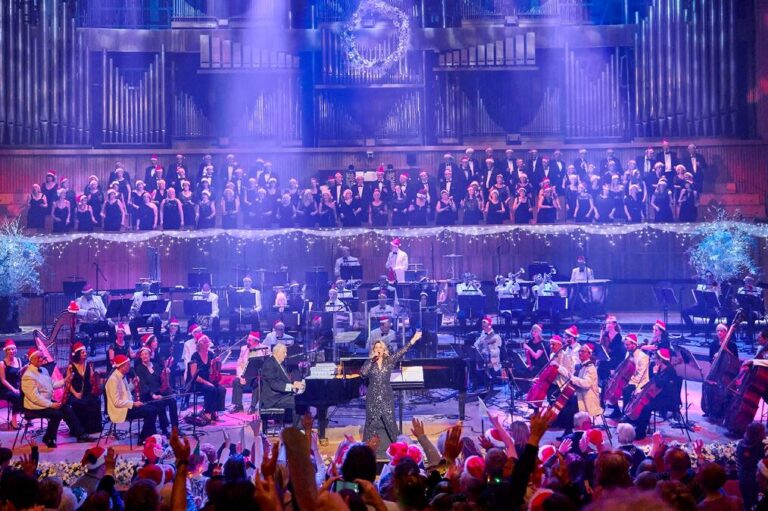 If you’re nervous about anyone catching wind of your bung notes, this Christmas singalong is a safe bet – you’ll be trilling away in an audience of 2,000 alongside the London Concert Orchestra, who’ll be interspersing the traditional carols with Slade. 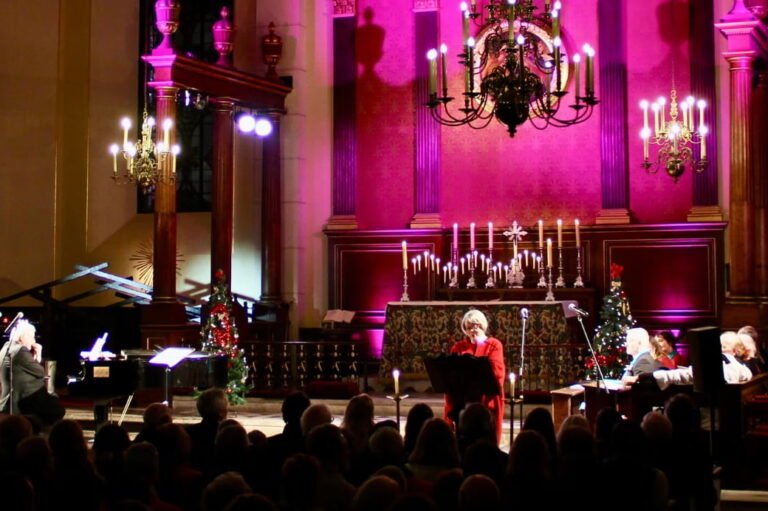 As you’d expect, The Actors’ Church in Covent Garden has no shortage of talent to draw on for their festive concerts. This year you can catch West End stars singing musical theatre songs & carols alongside charity carol services in aid of Meningitis Now and The Food Chain; a relaxed Christmassy singalong; a traditional carol service with mince pies & mulled wine; and an Elizabethan choir (in full period costume) singing alongside readings from guest stars of stage and screen.

The MS Society’s charity carol concert is set to be a fairly fancy event: there’ll be carol singing, stunning performances by the choir, and readings from the likes of Sue Perkins and Scott Mills.

The Rat Pack at Christmas

Ok, so it’s not The Rat Pack, but it’s a bloody good tribute act comprising Stephen Triffitt, Mark Adams and George Daniel Long, who’ll be serenading you with Let It Snow, Baby It’s Cold Outside, and a couple of other classics like New York, New York.

Carols by Candlelight at Union Chapel 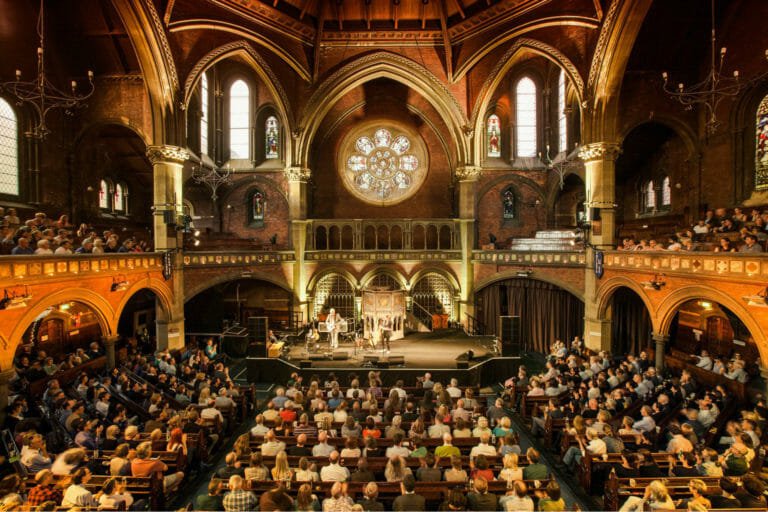 One of the most popular carol services in London returns this year, illuminating the vast, grade II listed Union Chapel in Highbury with the glow of thousands of candles. There’ll be performances of classic carols and parts of Handel’s Messiah sung by the Union Chapel Voices choir, accompanied by a string quartet and the church’s amazing organ, as well as well-known carols to sing along to.

Chelsea’s Cadogan Hall looks eminently cheery at Christmas time, with lights strung up and a big sparkly tree behind the choir. This year, that choir is the 100-strong Bach Choir, accompanied by a brass ensemble, who’ll be taking you through carols old and new – including an award-winning one that was written this year.

More atmospheric than the telly, less faff than going to Cambridge – this concert brings the world-famous choir from King’s College to the Barbican, where you can join them in singing classic carols with the Philharmonia Orchestra.

Now a regular festive fixture, the Mozart Symphony Orchestra are ditching their namesake for the day to play a live soundtrack to accompany this screening of The Snowman. Bring tissues. 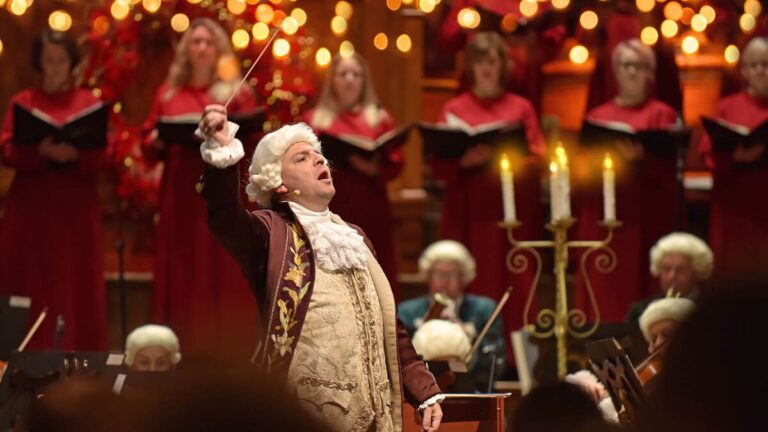 For a Christmas gig with all the trimmings, this concert should fit the bill – it’s performed entirely in 18th century costume in a ‘candlelit-style’ setting. The line-up includes plenty of baroque and classical bangers – Zadok the Priest, Joy to the World, Let the Bright Seraphim, etc. – and is rounded off with some old-school carols, like O Little Town of Bethlehem and Good King Wenceslas. 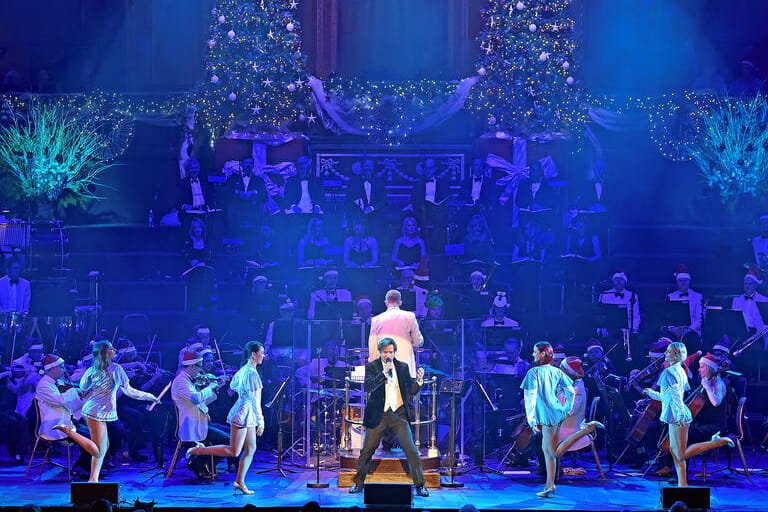 If, somehow, you haven’t had total Christmas pop fatigue by the 23rd, the Barbican are staging a Rockettes-style festive extravaganza, with The London Concert Orchestra, Capital Voices and The Jingle Bell dancers taking you from Bing Crosby to Elton John. 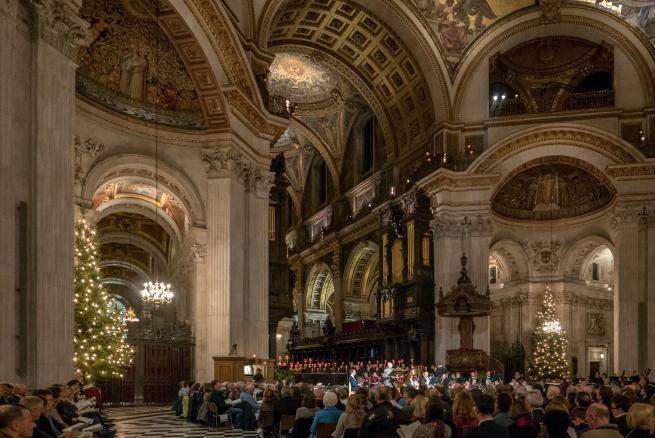 It doesn’t get more traditional than this: huge, twinkly trees; a professional choir and one of London’s most iconic settings: the carol services at St. Paul’s Cathedral are free and unticketed, so prepare to have your morals tested when trying to get a seat.

Looking for festive things to do? Check out our guide to Christmas in London 2022