David Hockney At The Lightroom

Because people are going to be craning their heads up at frankly unnatural angles in order to take in the entirety of David Hockney’s new, illuminated, four storey tall exhibition, opening a brand new digital art space in King’s Cross called Lightroom. Call it immersive if it makes you happy, but the fact is that this thing is gigantic, and will utterly envelop people in vibrantly hued artworks.

Hockney’s always been one to embrace new technologies; in the ’80s he used photocopiers & faxes, in the ’90s he used computers & polaroids, in the ’00s he used iPhones & iPads, and now he’s using laughably huge digital projection. And that’s quite an important point, too – he’s been actively involved in the project from the get-go, spending the last three years collaborating with the creators in order to put it together. Thus the works you see are specifically painted for the space, not merely modified to fit it. 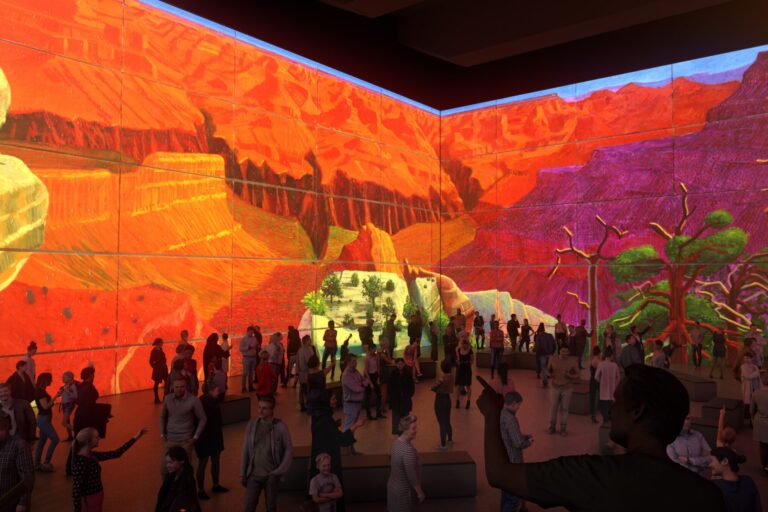 And what a space it is. Hockey’s show, called “BIGGER & CLOSER (not smaller & further away)”, is just the first in a parade of projection art exhibitions that Lightroom will display. It’s a fully 360º show that will literally surround you on all sides within a 40ft cube of moving art, complete with audio narration too.

David Hockney: BIGGER AND CLOSER (not smaller & further away) will indeed be bigger. In fact, it’ll be divided up into six separate chapters. You’ll hear the voice of the artist himself, along with a specially composed score by Nico Muhly (he did movies like The Reader with Kate Winslet), as he takes you on a journey through his life & work. You’ll see the world through his eyes, jumping from Yorkshire, to LA, Normandy, the San Gabriel Mountains, and more – including a vivd demonstration as to why “only paint can properly convey the hugeness of the Grand Canyon”.

It’ll all run on a loop roughly 50 minutes long, and you can stay for as many loops as you want, so you can catch anything in the upper stratosphere of the building that you might have missed on the first viewing.

Just make sure to brace yourself first.

Love art? Have a look at what’s on at the best art galleries in London right now…