When the people behind Flight Club announced they were electrifying shuffleboard, some people were shocked.

After all, it’s a game that’s essentially remained unchanged since its wildly popular days back in the Tudor era, when it literally had to be banned because people spent more time playing shuffleboard than working.

Now, however, it’s been dragged into the 21st century with the team’s signature blend of high-tech wizardry, cocktails and general joie de vivre – and placed into a venue worthy of such a grand cultural leap. 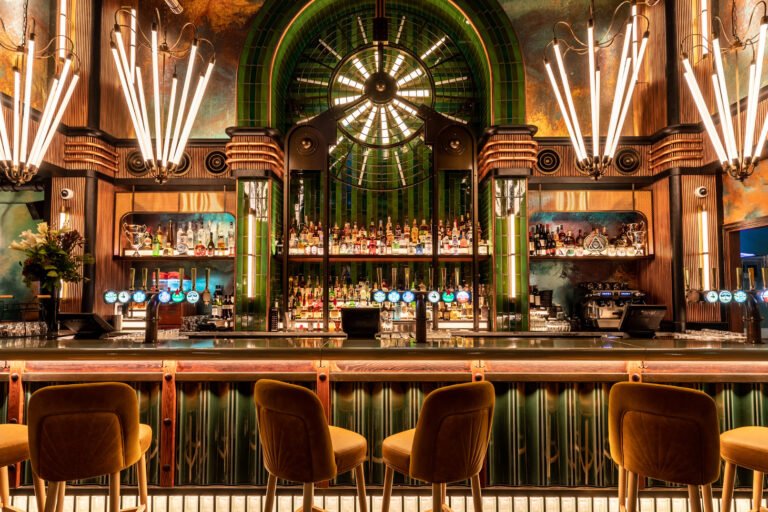 You’ll find Electric Shuffle set across two floors in Canary Wharf – and yes, it’s worth a trip even if you don’t work there. They’ve dolled it all up with a playful retro-futuristic vibe that occasionally dips into steampunk territory thanks to touches like the huge centrepiece bar, which boasts a double-height neon lighting installation.

As you walk in, you’ll notice a large ’70s-esque control panel (directly inspired by the Netflix show Maniac) taking up the entire wall. Right at hand-height is a button labeled ‘Do Not Press’. Obviously, you’ll press it immediately. Lights dance across the wall, for the first of many, many times (or until you stop pressing it).

There are ten lanes in all across both floors of Electric Shuffle Canary Wharf, each occupying a semi-private area of its own and bookable for up to 32 people. You’ll find a little touchscreen next to the lane itself, from which you can do everything – call for table service, upload team photos, and so on. It’s all been cleverly designed to suit big groups as much as it does a two-player tournament: you’ll be organised into teams, with individuals called up at regular intervals and pitted against a rotating line-up of rivals from the opposition – and if you’re a really big group, those screens even link up across lanes so you can conduct a venue-wide tournament.

The screens also allow you to choose which games you’d like to play – because this is Electric Shuffle, after all, and you’ll find the traditional tabletop game has evolved here. Instead, there’s three totally new and unique challenges to choose from (or play repeatedly until you finally crush the competition), all enhanced by high-tech projection mapping and motion tracking that we couldn’t go into any more detail on if we tried. Those games are:

Amplifier – this is Electric Shuffle’s take on the traditional game, where the aim is simply to land your ‘biscuits’ (the colourful pucks) in the various scoring zones marked out on the lane… and ruthlessly knock your opponent’s off.

Territory – this is a game wholly of their own invention. The computer separates the lane into hundreds of virtual hexagons, which are then each coloured to match the puck that’s currently closest to them. So the idea is to capture ‘territory’ by landing pucks in the most empty space (or by huddling up to enemy pucks to steal theirs). Whichever team gets the most territory wins. It’s instant fun.

Eclipse – this one’s a take on boules, in which you’ve got to land your puck as close to the board’s central black spot as possible, strategically knocking others’ off the mark. 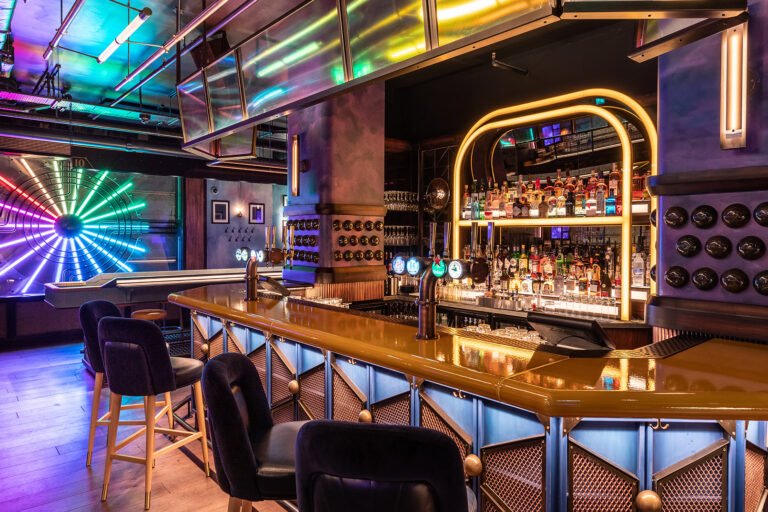 Of course, there are drinks too, including cocktails to share served up in giant trophies; frozen coconut coladas and house signatures like the Electric Dreams with tequila, mezcal, pomegranate and foamer bitters. And, you know, beer and wine and stuff. And there’s also a vast food menu (there’s a pizza oven if you’re into it, or some classic burgers), with plenty of shareable bites like roasted padrón peppers and mac & cheese croquettes. Finally, there’s the Electric Shuffle brunch that promises a bottle of prosecco per person.

You’ll be doing a little shuffling of your own, after that.

NOTE: Electric Shuffle Canary Wharf is open daily. It costs £11pp to play for 90 minutes, or £35pp for the two-hour bottomless brunch with a game of shuffleboard. You can make a booking right here.

Like games you can play with a drink in your hand? Check out London’s finest activity bars