Somerset House Is Getting A Psychedelic Ferris Wheel...

The teeny tiny area where they all somehow overlap is This Bright Land.

It’s a month-long, colourfully psychedelic festival hitting Somerset House for the whole of August. It’s going to be free to enter, open to all, and it’ll all be centred around a huge pop-up Ferris wheel. They’re planning on packing rather a lot of stuff in, ranging from street parties to voguing nights, but let’s start with the permanent stuff:

The Ferris wheel is going to loom 35m high, which isn’t massive in terms of Ferris wheels, but it is in terms of pop up things. And for reference, the highest point at Somerset House is around 20m tall, so you’ll be able to take in quite a nice view in every direction from the top. And it’s not just a treat for the eyes, either – each gondola will have its own “uplifting audio experience” in which you’ll hear the voices & stories of “Londoners from all walks of life”. Which sounds interesting at the very least. 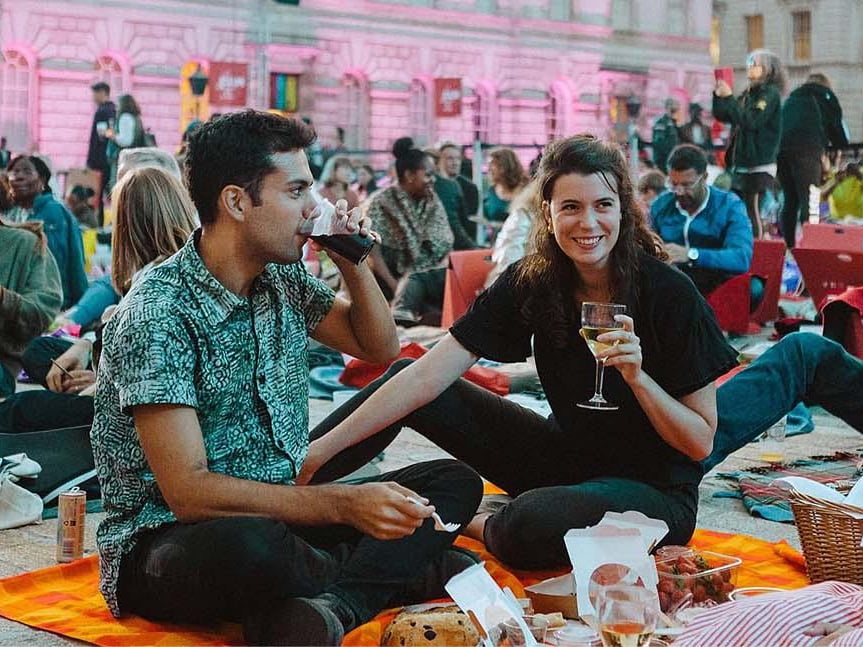 Then there are the installations, which include the vibrantly colourful Wonder Garden which is apparently stuffed with “floral pathways and unique breakout spaces”. And then there’s the Clubhouse, which is apparently a “futuristic space” armed with its own “active beauty stations where visitors can enjoy free make-up services”. So, make of those what you will.

And there are the events – each Friday is going to be the home of performance nights, with a very diverse lineup of DJs, dancers, and artists pencilled in to pull the crowds. Saturday nights are reserved for those open-air vogue balls, as hosted by Vogue Rites – apparently the finale on August 27th will be “the largest open-air Vogue Ball in UK history”. And finally, Sundays are set aside for day-to-night street parties, loaded with live art, games, workshops, treasure hunts, and more.

Finally, the literal cherry on top of all of this is the food & drink. The former will be provided by Black Eats LDN, who champion culinary delights from independent Black-owned businesses across London, meaning that you’ll find sustenance from East African, West African, Caribbean, American, South American cuisine, and much more. And the latter? Your thirst will be ably slaked by the Bombay Sapphire pop up bar serving up classic cocktails and gin-loaded citron pressés.

If you could do with some lemon-aid.

NOTE: This Bright Land is set to run from 1st-29th August 2022 in Somerset House. Tickets are free (although parties cost up to £22.50) and are likely to sell out fast, so snap them up right here.

Culture vulture? Check out what’s on at every London art gallery right now.