When the competitive minds behind Bounce and All Star Lanes decided to branch into darts with Flight Club London, they must have really known their target audience.

Because instead of recreating a 70s pub with pork scratchings trodden into the carpet, they took a punt and created something a little more glitzy. Flight Club London’s irresistible combination of quirky fairground-styled interiors; sociable booth seating; cocktails; grazeable bar snacks and ingenious dart-tracking animated tech wizardry has achieved the impossible: somewhere that’s as fun to go on a date as it is with work colleagues.

The clever bit? They’ve done away with the worse parts of the game (keeping score, sticky darts, basic target skills) and replaced them with something that’s altogether more fun: souped-up games that everyone’s got a decent shot at winning… and cocktails.

Now sitting pretty in four locations, here’s what you can expect from the four Flight Club London bars…
– 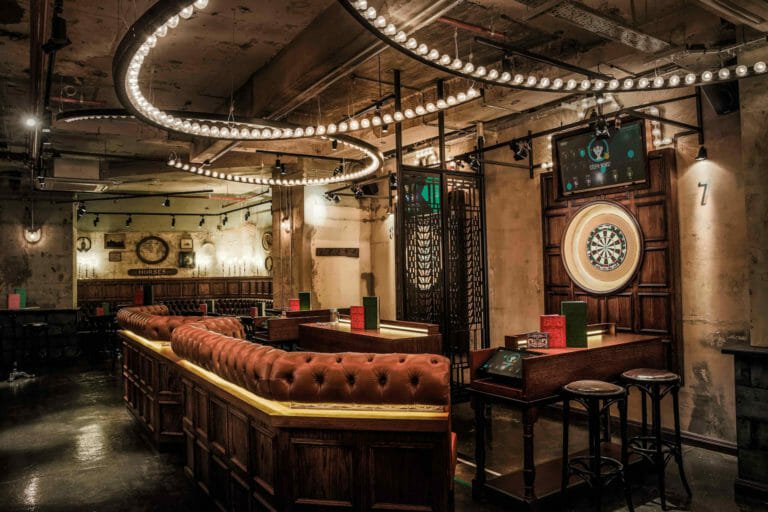 Where it all started: perched by the Old Street roundabout, Flight Club Shoreditch is literally on the boundary of the City (work) and Shoreditch (play). That fine line’s reflected in the interiors, which combine the traditional (sprawling Chesterfield leather booth seating and wood-panelled dartboards) with the playful (Shoreditch’s mandatory peeling plaster walls; fairground lighting and industrial metal screens). The original tech they debuted here has been tinkered with over the years, and now plays back slow-mo reaction shots of the team after particularly momentous throws…
– 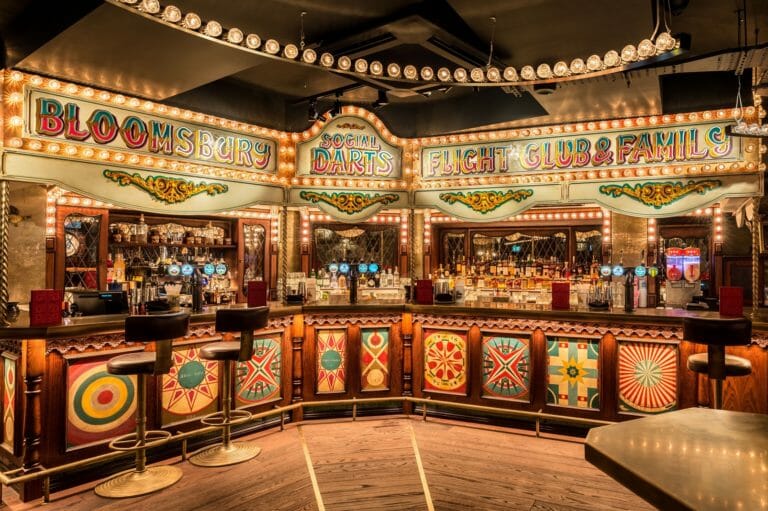 The whisper of a fairground theme from Shoreditch becomes a fully fledged carnival at the second Flight Club London bar in Bloomsbury. A huge, carousel-like bar dominates the space, decorated with abstract dart-themed artwork (dartwork?) and serving up boozy slushies like the Coco Fumada (with two types of rum and a little smoked salt). Spinning off that are nine darts areas, each equipped with the usual animated scoring screens, dart tracking and pre-programmed games like Demolition Darts and Shanghai.
– 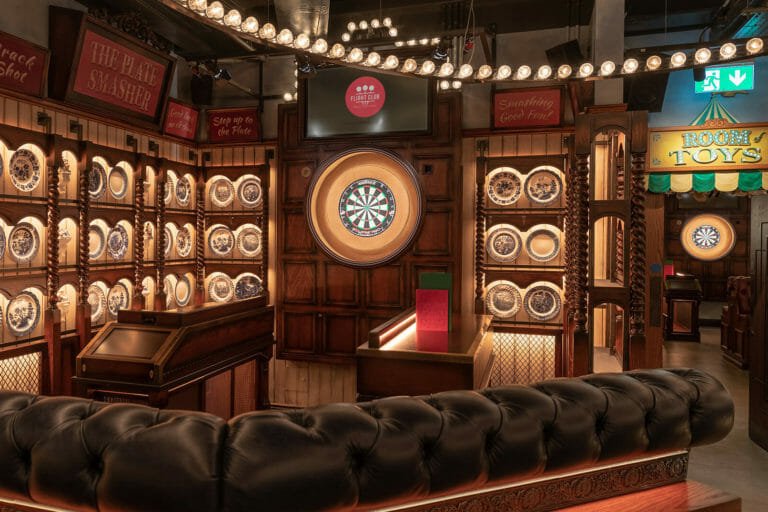 Flight Club Victoria is notable for making Victoria a place that you’d actually want to visit. The venue is absolutely huge, and has really trebled down on the funfair theme. There’s huge booths to relax in, with oches (that’s the dart lane) surrounded by suitably Victorian attractions, from shooting galleries and willow-patterned plate smashing, to an area with a ceiling completely covered in teddy bears. There’s also, for the first time, a lot of outside space, with an English country garden (complete with a red telephone box) and a circular decked seating area that bears an uncanny resemblance to the Love Island firepit.
– 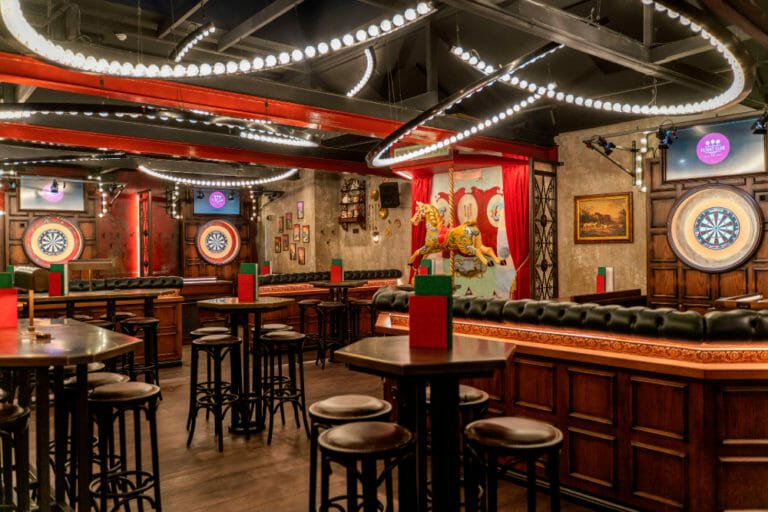 Housed in a deeply old fashioned former pub, this Islington venue is bedecked with some deeply old fashioned decor – you’ll find Flight Club’s signature Victorian-era fairground vibe, some peeling wallpaper, and ancient family heirlooms on the walls. Of course, the tech is all bleeding-edge, as usual, and in this venue that tech is packed into just four oches. And it’s a decent reminder of what makes the Flight Club London bars so good in the first place: each board is a semi-private area in itself, with its own dedicated seats, and barriers separating it from the rest of the space.

NOTE: The Flight Club London bars are all open daily. You can find out more, book in for bottomless brunch or reserve an oche right HERE.