…night out on the canal in Hackney Wick, thanks to Four Quarters East, sister-spot to the original Peckham venue known for its craft beer and retro arcade games.

You’ll find it parked in one of the Here East spaces overlooking the water (originally designed as a huge press & media hub for the 2012 Olympics), where its neighbours include a Breakfast Club and Randy’s Wing Bar. The comparatively new space is far larger than the Peckham original; it’s all open plan, with empty kegs lined up in the window, unpainted breeze-block walls, exposed piping overhead, booth seating, and arcade games filling every available gap; they even occasionally double as tables. 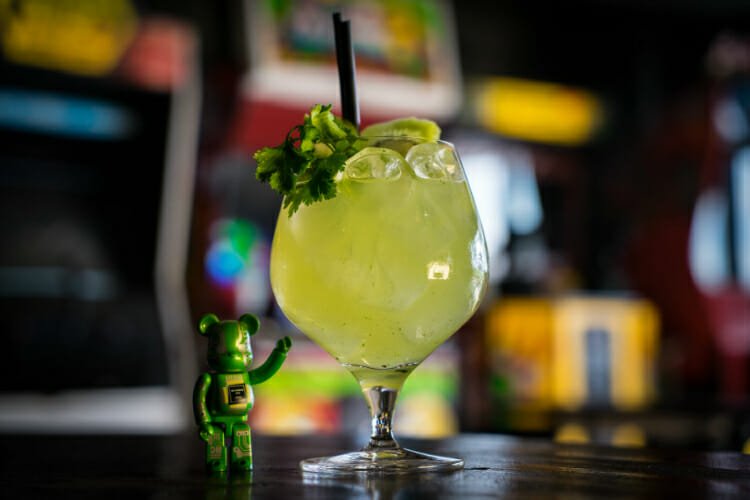 On the whole, the vibe is very similar to the original – games, rotating craft beers on tap, nostalgia-piquing cocktails – with the standout difference being the addition of a stone pizza oven which is putting out Teenage Mutant Ninja Turtles themed numbers. You’ll find everything from the straight-laced Leonardo (it’s a margarita), to the pulled chicken-laden Shredder, to the all-vegan April with artichoke hearts & olive caponata sauce.

The games themselves come in four different formats: retro arcade cabinets, the aforementioned table-top games; pinball machines; and bookable booths that have their own TV & console. The latter is completely free to play so long as you reserve your spot, while the others require actual US quarters to play, which you can get from the bar at 4 for a pound. The lineup changes regularly, but you can keep an eye on the current games online.

Just to make sure your favourite doesn’t get Tekken away.