A Peek Into Glenmorangie’s Cabinet of Curiosities…

So, a little while ago, we wrote about a huge, ephemeral, one-night-only, immersive whisky tasting experience called Glenmorangie’s Cabinet of Curiosities.

To absolutely no-one’s surprise, it sold out within an hour. The waiting list alone was 150 people strong. Tickets were like gold dust.

And to absolutely no-one’s surprise again, it was a resoundingly spectacular success. Guests lucky enough to have gone have even written in simply to tell us that they had a fantastic time, and that their host Dr. Bill (Glenmorangie’s Director of Distilling, Whisky Creation & Whisky Stocks, no biggie) was every bit as charismatic & engaging as we’d all suspected he would be.

But you’ll be happy to know that even if you didn’t get to go -which, taking a wild stab-in-the-dark guess, you probably didn’t just given the numbers involved – you can still get a virtual, video-assisted walkthrough. Annnnd you can also win one of three bottles of Allta, the brand new 10th expression of Glenmorangie’s Private Edition collection. So you can get both the drama, and the drams. For now, let’s dive into the former…

Things started outside, as they often do. Guests arrived at the nominated address, and cocked their eyebrows in curiosity as they stared at the huge, faceless building presented before them. But the gentle sound of a piano being played soon enticed them through the door where – after being handed a mysterious key – they found a softly-lit, welcoming snug that appeared to resemble the living room of a cordial Scottish family. Clusters of armchairs, coffee tables, and cocktail trolleys sat in orbit around a flickering fireplace. A piano player tinkled the ivories. This was the appropriately named The Welcome Room, and guests were soon welcomed by a waiter brandishing a Glenmorangie Highland Thyme cocktail (and a few canapés) to start their evening off in style.

As they’d soon learn, that room was actually a recreation of Glenmorangie House up in Scotland where Dr Bill Lumsden himself draws large swathes of his inspiration. It’s also the home of Glenmorangie’s Private Edition collection – a collection full of creativity, innovation, and whisky-firsts – which, having reached it’s 10th year, (and 10th expression) is what this entire experience was in celebration of.

Polishing off their cocktails, everyone then slid through a wavelike, barley-inspired installation into the heart of this elaborate operation: The Tasting Room.

Once everyone was safely set up at their desk inside, the intimate whisky tasting began – led by the duo of Dr. Bill Lumsden and Brendan McCarron (Head of Maturing Whisky Stocks, and the successor to Dr. Lumsden), who regaled the assembled whisky aficionados with tales of their travels around the world, and how those travels have shaped and inspired the creation of these whiskies. After all, who better to taste a selection of fine whiskies with than the people who literally created them? As the tasting session drew to a close Glenmorangie’s very special 10th Private Edition was then unveiled. And then – guided by Dr Bill – everyone then waltzed through to….

THE CABINET OF CURIOSITIES 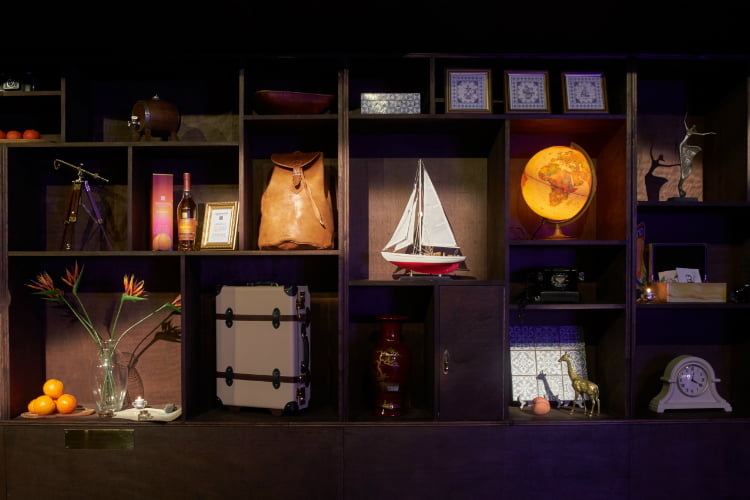 Inside this life-size cabinet the places, objects and people that have inspired each of Glenmorangie’s Private Editions were fully brought to life. The entire space was a large celebration of not only several of the most innovative whiskies ever made, but also of the man whose knowledge and expertise of wood maturation; use of grains and casks; and creativity concocted them. The walls were lined with shelves containing objects – boats, scales, oranges, plants – relating to various expressions, as well as a number of larger stand-out installations including a red and white striped make-shift candy shop with bags of sweets and drams of Milsean, and an exact replica of The American Bar at The Savoy.  The key handed to you at the beginning unlocked a secret door behind which were even more drams of whisky, some incredibly rare, some incredibly expensive, and some simply straight-up delicious. In fact, like the whole event…

…it was pretty neat.

NOTE: Glenmorangie is giving away three bottles of Allta,  the brand new 10th expression of Glenmorangie’s Private Edition collection. If you want to be in with a chance of winning one, just click the Competition Button on this page.

Like the brown stuff? Here are the best whisky bars in London…

A Peek Into Glenmorangie’s Cabinet of Curiosities…