Fun fact: the phrase “stealing someone’s thunder” actually came from a very literal incident in the 1700s when an unsuccessful playwright found that a theatre had rejected his play, but had nicked his idea for a thunder machine.

Which, in a roundabout way, leads us to the point that for all its unique and eccentric charms, Portobello Road has a tendency to steal thunder from every other street in the area.

Next time you’re in Ladbroke Grove, it’s worth heading off the beaten track to explore Golborne Road, the less-hyped, more chilled out sibling to the world-famous Portobello. Taking in a legendary pastel de nata shop, some iconic architecture and rooftop cocktails along the way, here’s the best way to do it:
–

High on the list of things you never thought you’d do as an adult: (willingly) going to school on a Saturday. But if there’s a reason to do it, it’s the lure of Michelin star-level street food. Once a week, Portobello Schoolyard market sets up shop in the playground of this Spanish school, dreamed up as a kind of foodie alternative to the packed-out antiques market. 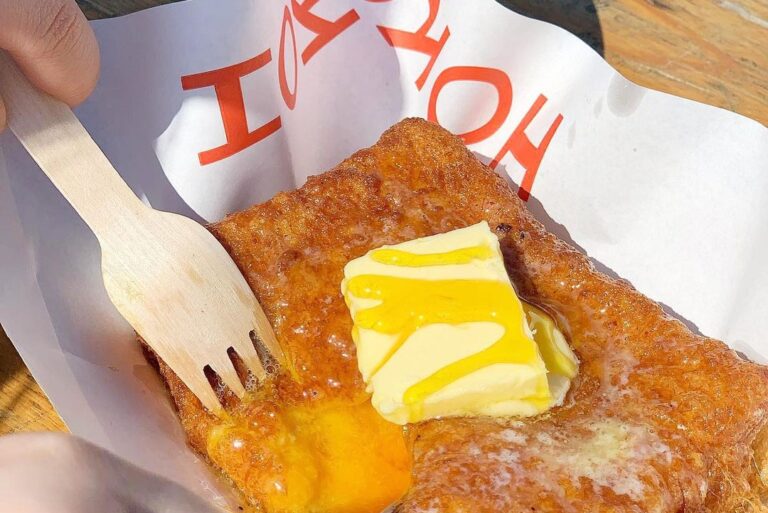 Given that you’re planning a day out here, it’s probably not a great idea to pick anything up from the fishmongers – but there’s a lot fighting for your attention including homeware, handmade crafts, jewellery and street food. Build yourself the lunch of kings with a bagel by ex-Leroy chef Sam Kamienko, or a little fresh pasta from Michelin-starred chef Phil Howard’s stand, OTTO. There are pop-up bars hawking natural wines and ice-cold beers, and anyone bearing a sweet tooth should stop by HOKO for a tray of their ludicrously good Hong Kong-style French toast before heading left out the market, and swinging a right onto…
– 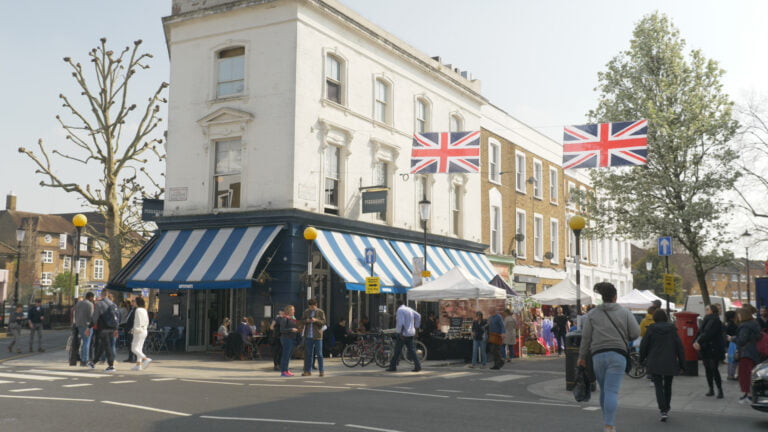 Well, here it is: a bustling neighbourhood high street packed with character. There are cafés with tables spilling onto the street alongside fully fledged outdoor restaurants; marquees housing sizzling grills filling the air with aromas of cooking from Morocco to the Caribbean. Here, family-run restaurants and independent businesses have been coexisting alongside the occasional big name for a while (you’ll spot an outpost of Pizza East on the corner, and Flat Iron was here for a few years too). Given its proximity to Portobello Road, though, don’t be surprised if Golborne Road starts changing rapidly – Flying Horse Coffee and Le Labo have recently moved in.

Also relatively new is Trove, a furniture store that makes for great window shopping. On Fridays and Saturdays, the street becomes lined with second-hand stalls selling midcentury furnishings; collectibles and bric-a-brac, but pop into the shops too — highlights include L’Etoile (stop here for a great coffee if you need it); Lisboa Patisserie (those people outside are queueing for their famous pasteis de nata) and Fez, a souk stocked with leather slippers, lanterns and tagine pots from owner Omar’s homeland of Morocco. 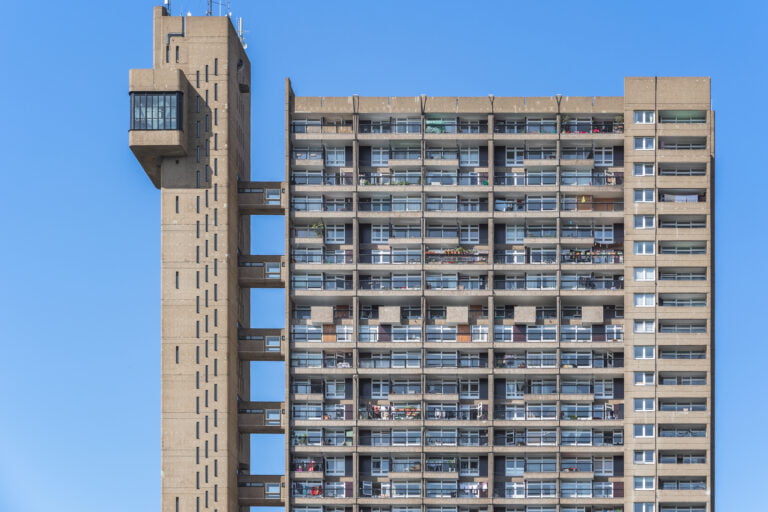 As you walk, look up to take in the divisive majesty of Trellick Tower, a brutalist housing block designed by Ernö Goldfinger (Bond author Ian Fleming is said to have hated it, with obvious consequences).

Head over the bridge at the end of the street, and duck into the old Victorian pub building on your left for…
–

Yes, it turns out that this former ye olde tavern is actually a portal to the 1970s. Cha Cha is a Latin American-inspired restaurant decked out with tasselled velvet stools; tasselled velvet lamps; and empanadas. You’re not here for all that, though — head upstairs to the first floor roof terrace, decked out with banquettes and umbrellas in sunshine hues, and order a couple of Watermelon Mojitos or a Honey Dream (with strawberry cachaca, honey liqueur and tonic).

Before moving on, pop your head into the changing rooms of the Sister Jane boutique on the first floor – they’re basically a free, unticketed version of the sell-out Yayoi Kusama infinity mirror rooms at Tate Modern. 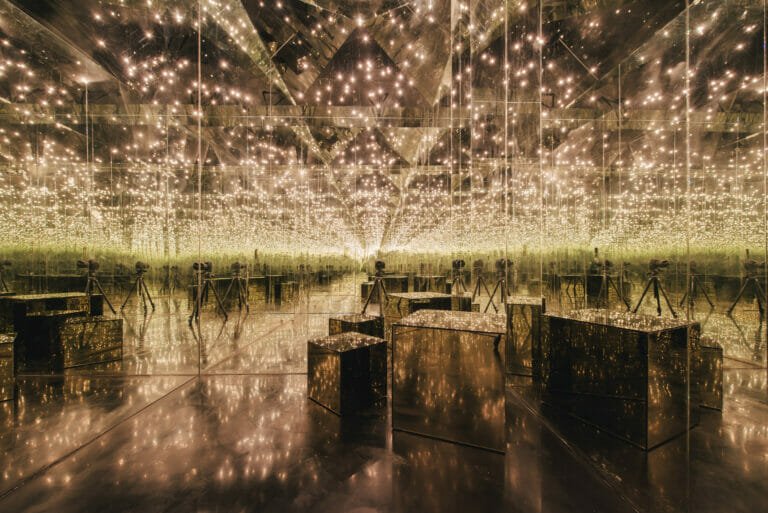 Next, retrace your steps and head left up Portobello Road for the final stop of the evening…
–

Chris Denney’s new restaurant is good. Devilishly so. He’s the self-taught chef who ran the kitchen at 108 Garage, which pulled in rave reviews from the critics but closed in 2019. Fiend is his solo follow-up, and he’s flexing his culinary muscle with a tasting menu that takes in the likes of lamb heart agnolotti with mustard dashi; asparagus with cured egg yolk and lardo; and jerk cod (with veggie alternatives available). It’s spectacular, a bit mad, and at £70 a head definitely one for a special occasion, but half the price of anything similar in central. 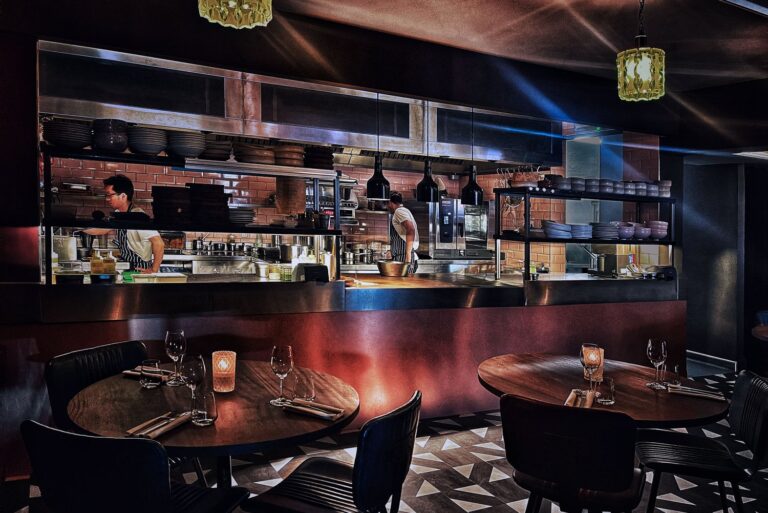 After dinner, head down to the lounge bar Bordel, decked out with original artwork and a moody, members’ club feel. Nightcaps on the menu here include a Death In The Night (Champagne & absinthe) and the classic Corpse Reviver…

…best consumed in that order.

Looking for more inspiration? Check out the best bars in Notting Hill.