Itinerary Location: City & Southbank | Duration: Half Day, Ending With Lunch (Though It Can Be Reversed, And Start With Lunch)

If you’re into art, food, bridges, churches and pigeons…

….well this is the itinerary for you.

It is – as you’ll have gathered by now – predominantly based around the most iconic pigeon experience on earth… and yet perversely that isn’t even the best part of this wonderfully well-curated itinerary. In fact some people would say the pigeon bit is almost certainly the WORST element of this flawless plan.  Thankfully, however, those people would be wrong – because everything that follows is excellent, with each element fitting together so seamlessly you literally won’t believe we actually made this entire itinerary up from scratch just for you. 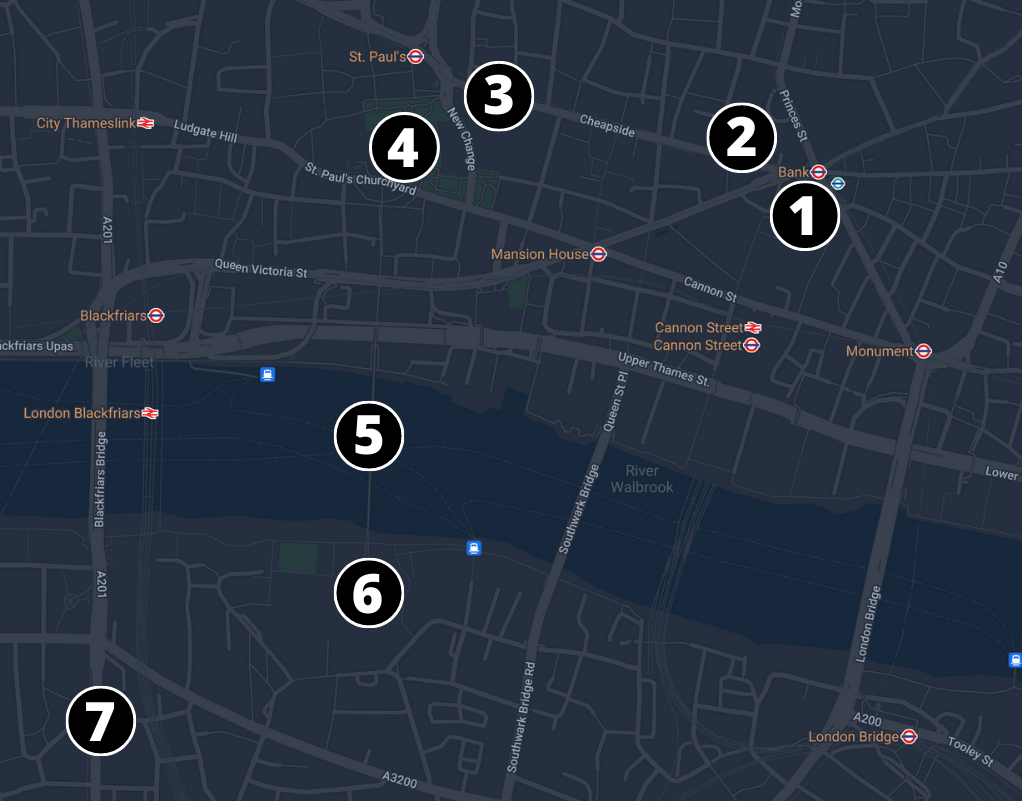 Escape the stuffy tube with a hop, a skip and a jump – departing from Bank Station via Exit 1 (for Poultry). Step out into the street and breathe in that fresh London air, safe in the knowledge that at least some of the cars and buses driving past you are electric.  If you’ve made the decision to do this itinerary on a Saturday on Sunday – even though it can most certainly be enjoyed during the week, as well – then there’ll be even less traffic than normal, so you can take an extra bonus deep breath in. Time to walk to The Ned…
–

➋ BUTTERMILK PANCAKES AT THE NED | 9:05am

And just like that you’re walking through the huge front doors of The Ned (which is basically Soho House, but cunningly for people not in the creative industries.. which means, naturally, more members) first thing in the morning. Why? Because it’s a spectacular building, and while yes there’s a bit of an old school buzz about the place if you pop by in the evening – mainly thanks to the live music that’s performed each night on the podium slap bang in the heart of the ground floor – there’s also quite a mixed crowd that can get a leetle beet lairy, especially on a Friday night. Popping in for Buttermilk pancakes with blueberry compote or a Breakfast Burrito with a Hard Green juice and a coffee at The Electric Bar & Diner will allow you to take in the building in a more serene fashion. Perhaps with a newspaper, or even another person (whom you’ll be able to hear) for company.

Once that’s done, exit through the…well, exit, turn right and walk up Poultry in the direction of One New Change – because that’s where you’re going next.
–

One New Change is a relatively compact shopping district (which we describe as such in order to avoid calling it a “shopping mall” – which sounds American – or a “Shopping Centre” – which sounds rubbish). You’ll be thrilled to hear that it contains an H&M, Hobbs, Nespresso, Reiss, All Saints, Sweaty Betty, a Ted Baker Grooming Parlour, and a bunch of other shops. In short, there is everything here that you need to do a brief stint of window shopping (or actual shopping) before doing what you really came for, which is taking the lift up to Madison; wandering out onto the roof terrace next to Madison; and then taking loads of photos of yourself in front of the spire of St Paul’s Cathedral. #yolo

It’s now time to descend to ground level, and take a 5 minute stroll to the steps of St Paul’s cathedral….
–

➍ THE MOST ICONIC PIGEON EXPERIENCE ON EARTH | 11:00am

Yes it was Mary Poppins who first shared the made up story of an old lady who liked to sit on the steps of St Paul’s Cathedral feeding pigeons (to the extreme annoyance of not only those afraid of catching a disease from them, but also everyone who was trying to get in and out of the church whenever the old hag was about). But that ancient lady’s actions were – despite being a health hazard in multiple ways – iconic, and so if you haven’t at least attempted to replicate them by tossing handfuls of bird seeds all over the tourists sitting on those famous steps (and waiting for some flying rats to turn up) well, you’re no more a Londoner than you are a true Mary Poppins fan.

Seeing as you’re here, you may want to pop in the cathedral.  If you do, know this: the dome of St Paul’s is one of the largest in the world, and when you attempt to walk up to it you’ll pass the Whispering Gallery en route. Stand at opposite sides of the gallery with a friend, and see how quietly you can whisper to each other and still be heard. You’ll be surprised not a jot to learn that you actually have to do it quite loudly.

Now, get the compass out on your iPhone and head due south to…
–

The spindliest of all the London Bridges, The Millenium Bridge fortunately only has to support the weight of people walking and not cars or buses, so you’re safe. About of the third of the way across is also a great time to have someone take a photograph of you with St Paul’s Cathedral in the background – which you’ll want to do, because you won’t have enough photos of St Paul’s by this point… #yolo
–

➏ INFINITY MIRROR ROOMS AT THE TATE MODERN | 11:30am

On exiting the bridge you’ll find yourself right in front of the world famous Tate Modern gallery. Why? Because this is an extremely well planned itinerary, and we’ve left no stone unturned in ensuring that each part of it leads into another part. Now, the Tate Modern – which is home to thousands of mesmerising paintings, unusual installations and avant-garde sculpture – is of course full of lots of cool art to look at, however should you decide to book advance tickets to see Yayoi Kusama’s Infinity Rooms exhibition, well you won’t be disappointed. Unless you don’t like infinity room exhibitions.

Take your time wandering around the vast gallery; then take a little more time exiting through the gift shop, and it’ll be time for a rooftop lunch with stunning views of London. Yes, you’re heading to the very top of the Hoxton Hotel in Southwark in order to soak up some sun AND some…
– 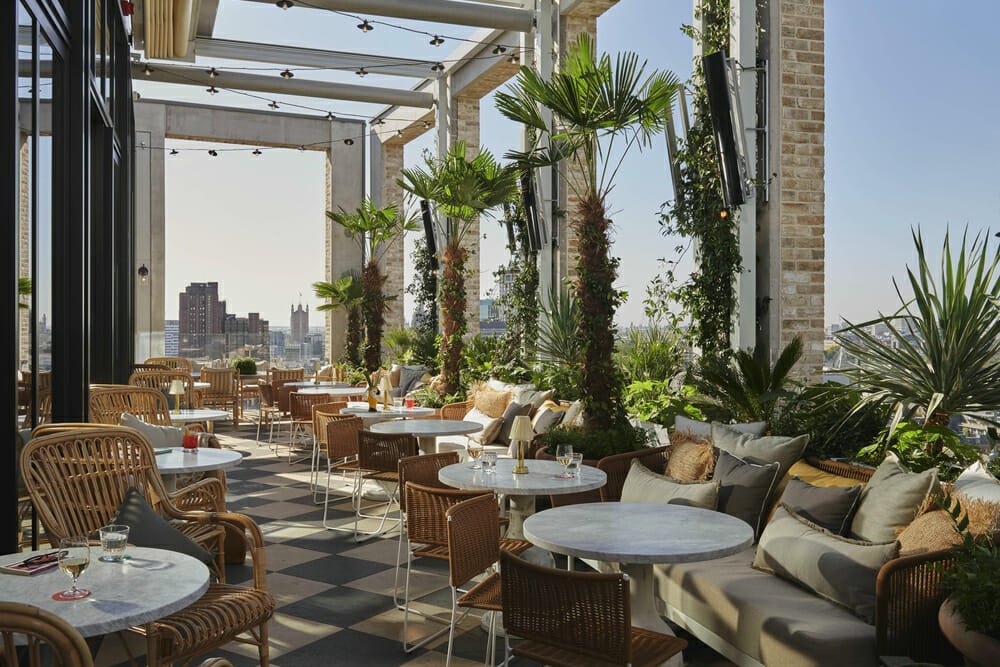 Finally a photograph! And what a photograph it is, too. Interestingly, however, it’s genuinely NOT one of those photos that makes the venue in question look better than it is – if anything, it doesn’t do Seabird justice. Sure it’s not the cheapest of lunch spots, but on a sunny day a little roasted Cornish cod and a glass of Rosé or two up there (complimented by a seat outside right next to the most dramatic views of London you’re likely to find anywhere) genuinely can’t be beaten. You need to book Seabird in advance though.

After lunch you’ll find yourself a mere stone’s throw from Southwark tube station, however if you’re in search of more adventure a leisurely stroll along the South Bank to Borough Market might be a nice way to end your mini adventure…