Head into the Montgomery Square in Canary Wharf this October, and you’ll see three shipping containers neatly lined up. Inside each of them, there’s a short, punchy, and reasonably priced experimental piece of theatre from a collective called Darkfield.

And trust us, they’re thinking very much outside the box.

They’ve already toured the shows across London, New York, Scotland, South Korea, Canada, Australia, annnnnd Mexico collecting literally hundreds of thousands of audience members along the way. And now they’re back in the capital. The idea is to make the experiences quick (20-30mins), intense, and deeply immersive – in fact, they almost all take place in the pitch black, with headphones piping binaural sounds into your ear canals so as to create an uncanny sense of three dimensional space.

The three shows they’re putting on include: 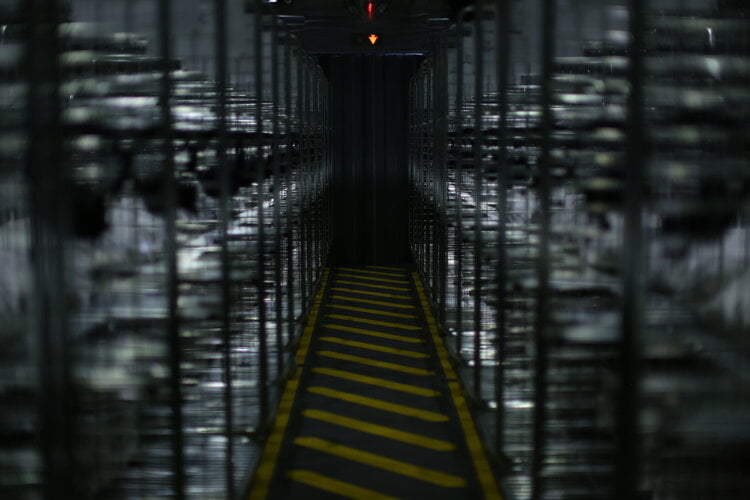 Taking place in complete darkness over the course of 35 minutes, the show uses clever sound techniques to take you on a surreal, otherworldly journey through a dreamlike, labyrinthine hotel that exists entirely in your mind. You’ll get a keycard and a chaperone at check-in, and using speech recognition, the route you take through the corridors and rooms is up to you. It’s trippy, surreal, and sometimes quite dark…

A slightly more philosophical number, the interior of this container precisely resembles an Airbus 320 economy cabin. After taking your seat, you’ll have your attention directed to the onboard safety demonstration which will, ironically, make you feel considerably less safe. A passenger – one Mr. Schrödinger – will go missing. Or not. Because reality will then split into two different timelines, and the existential questions will begin.

And last but not least, there’s –

The space inside here is lined with roughly 30 individual medical-style bunk beds. Lying down, you and your fellow audience members will all put on your headphones, and hear a calm, authoritative voice command you to take the little white pill that has appeared by your bedside.

You do so without a moment’s hesitation.

And what follows is a waking coma complete with darkness, sounds, smells, and shared hallucination.

Like we said, it’s all quite leftfield. And according to the general feedback, while it’s all pretty good, some bits work better than others. But it’s all highly interesting, costs less than a tenner, and you won’t forget it in a hurry. Plus, it’s only in town for a few days…

…before those containers are shipped off somewhere else.

NOTE: Darkfield’s shows are playing in Montgomery Square in Canary Wharf this October between Wednesday 12th – Sunday 16th, and then Wednesday 19th – Sunday 23rd October. Tickets are available at the site right here.

Like immersive experiences that you can, you know, see? Check out the best theatre shows playing right now…