Cirque Du Soleil Are Back In The Royal Albert Hall

In 1979, Guy Laliberté dropped out of college to become a street performer in Quebec.

And, just as everyone predicted, he’s now a billionaire.

It’s mostly thanks to the fact that his band of street performers was called Cirque du Soleil, which has become easily one of the world’s most popular entertainment attractions because, well, it’s amazing. And it’s returning to The Royal Albert Hall next January with a stunning new steampunk-inspired show: KURIOS – Cabinet of Curiosities.

We say returning to the Royal Albert Hall, because Cirque have been performing there in various guises for the past quarter of a century, selling literally millions of tickets in the process. In fact, it’s the only historic venue worldwide to have installed permanent technology to accommodate Cirque’s insane stunts. And for this show, they’ve spent nine months installing a massive steel skeleton to strengthen the venue so that they can put on KURIOS.

And that fact alone should give you some sense as to the sheer scale of this production. It’s set inside the mechanical lab of a wonderfully eccentric inventor, who apparently enjoys powering his Victoriana-style gadgets by using acrobats in colourfully detailed spandex. Well, there’s also some stuff about hidden worlds, and time standing still, and the power of imagination and whatnot, but let’s face it, the plot is mere window dressing on this gravity-defying banquet. 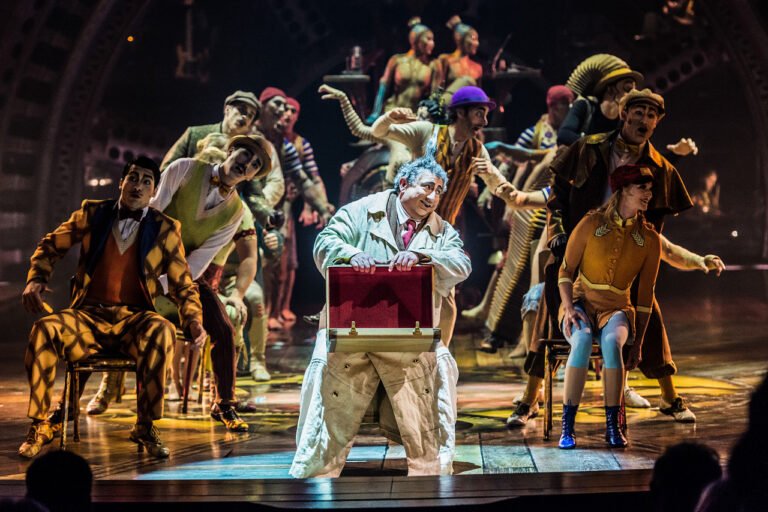 It’s headed here on tour having debuted in Montreal, and it’s gathered up some remarkably good reviews in the process. Words like “astounding” and “classic” have been thrown around, but perhaps it’s been best described by the Chicago Sun Times, who called it “a dazzling, hyper-detailed, potent, quixotic and generally fantastic show that reveals this extraordinary artistic company’s singular capacity for exploration and metamorphosis. It is not to be missed on any account.”

Basically, the performers will bend over backwards to put on a good show for you.

The show must go on! Good thing we have put together a guide to all the best burlesque in London…