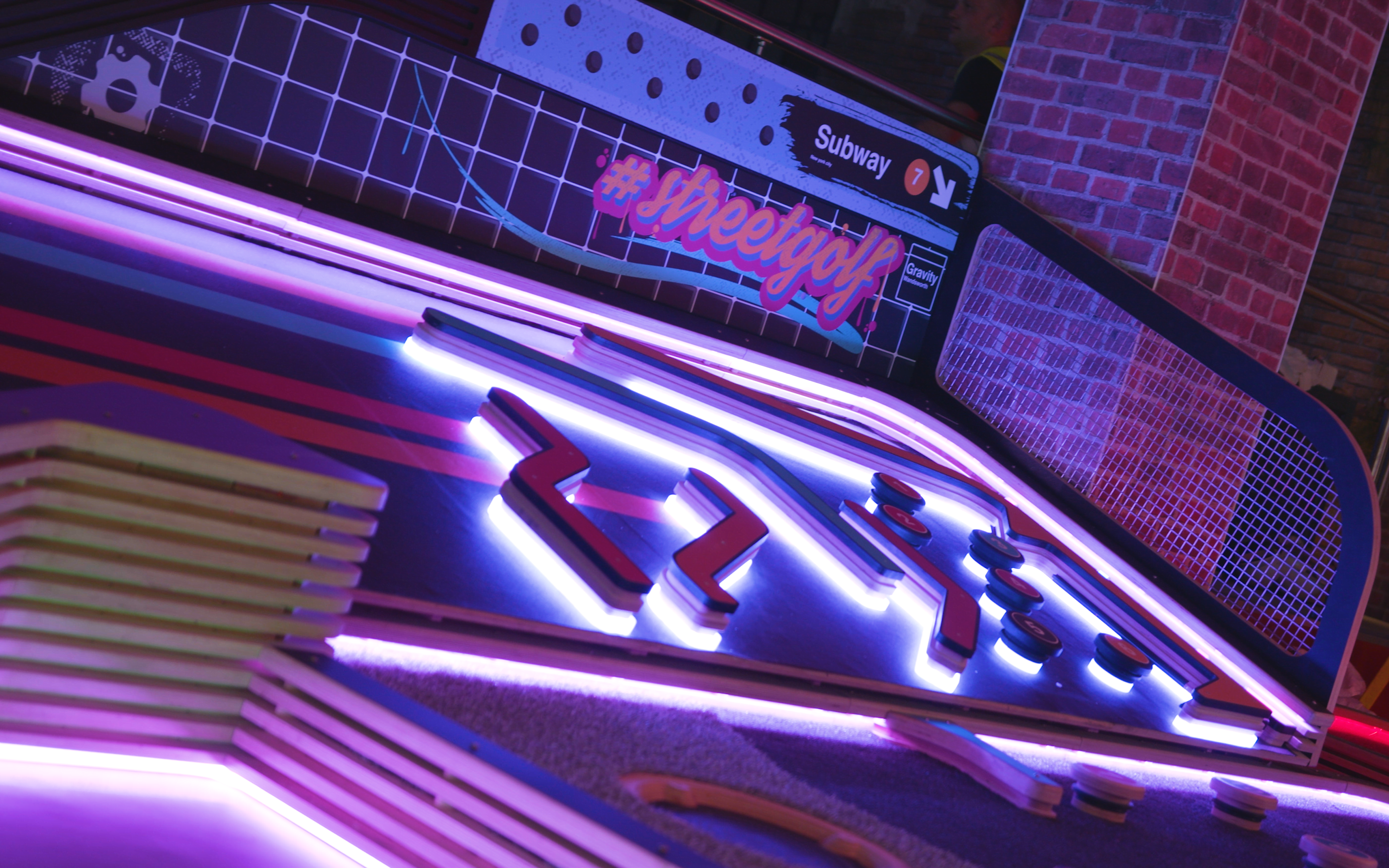 Yes, Flight Club has augmented reality darts. Electric Shuffle has teched-up shuffleboard. Swingers has inventive crazy golf. But Gravity Wandsworth has all three in the same, huge room. And they have Electric Gamebox. And augmented reality bowling. And indoor, multi-level go-karting. It’s basically one huge activity bar buffet, with everything you could want from a dozen nights out all in one package. READ MORE
Numbers? It’s gigantic, so pretty much limitless. But each roving, game-hunting group should be no more than 5-6 people.
– 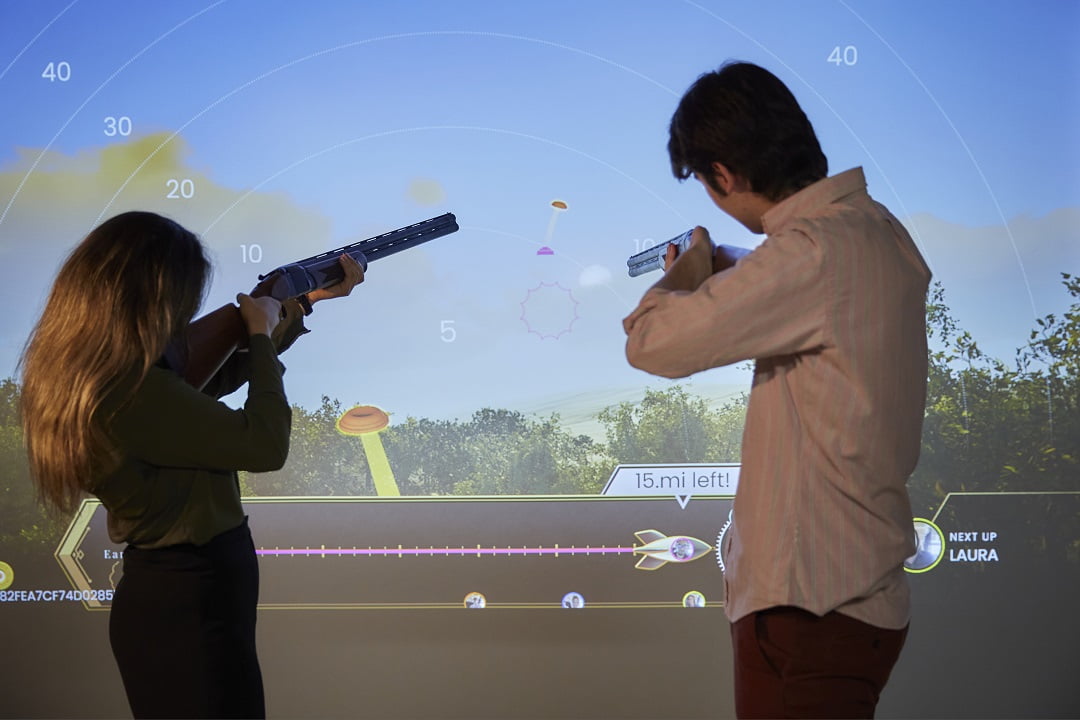 It’s a virtual clay shooting bar in the City, using amazing tech to simulate Olympic clay shooting – while making it considerably more fun with the addition of two new competitive games. Oh, and the cocktails. And the bar food, courtesy of a former Ritz chef. READ MORE
Numbers? Up to 20 on one ‘peg’ (shooting booth), or commandeer a couple for larger parties. They have food & drink packages available too.
– 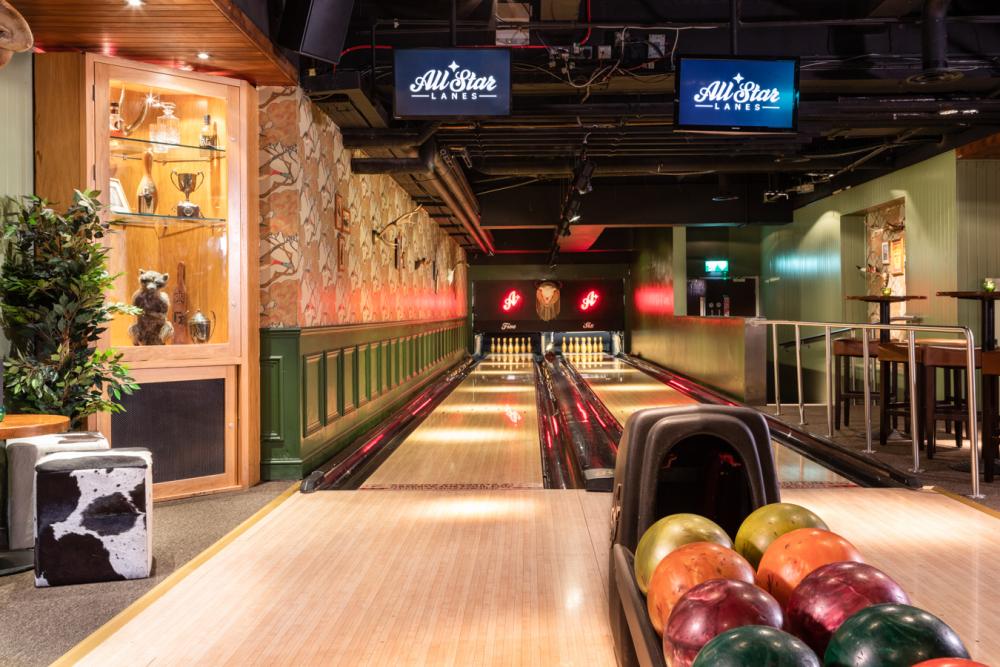 Bowling’s great. Especially when you combine it with cocktails, non-sweaty shoes, a 1950’s vibe, an authentic American diner serving everything from Southern fried chicken thighs with buffalo sauce, to chargrilled prime beef steaks, and private karaoke booths. Just in case you accidentally on purpose elect to get drunk, you know. READ MORE
Numbers? Up to around 21
Also check out: Bloomsbury Bowling Lanes, which sport a similar retro vibe and allow you to book up to 8 lanes at once.
– 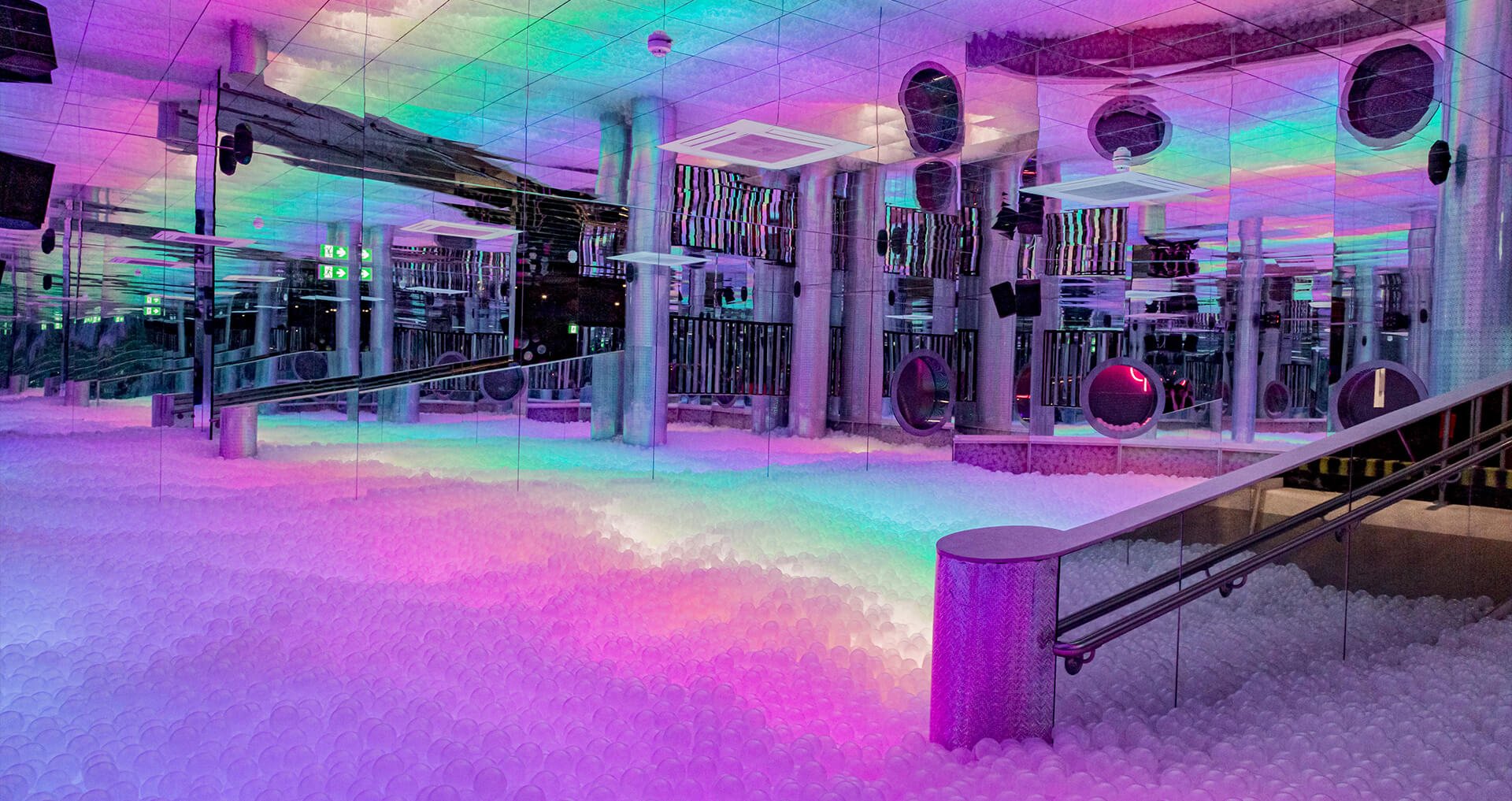 It takes a lot of balls to create an experience like Ballie Ballerson. 1, 000, 000 to be exact. Because this is the city’s largest ballpit bar, and it’s armed with a million transparent balls all backlit with a 10k LED dancefloor underneath. Yeah. And there are cocktails.
Numbers? You can book for up to 78, so a lot.
– 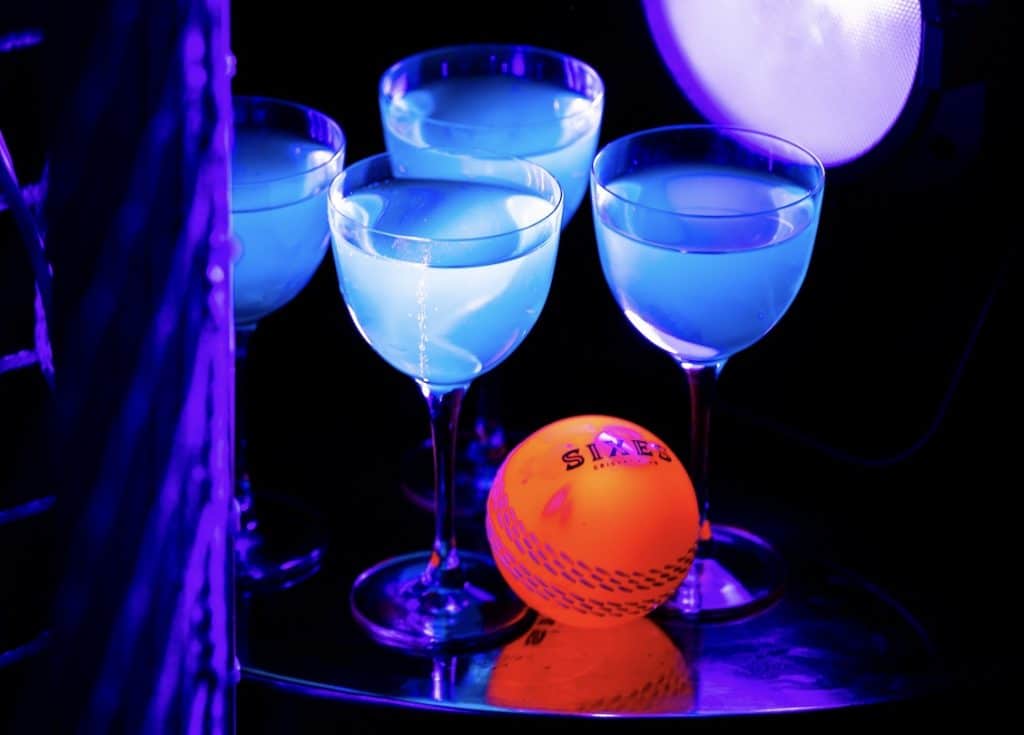 Cricket bar Sixes have done something bold, and it’s got glowing reviews. They offer batting sessions in their cricket cages that are completely blacklit, with luminous UV bats and balls. Plus, there’s signature cocktails like the cognac-laced Bread & Butter, and BBQ-style grub like whisky-glazed beef short rib and burnt ends nuggets.
Numbers? Up to 10 per batting net.
– 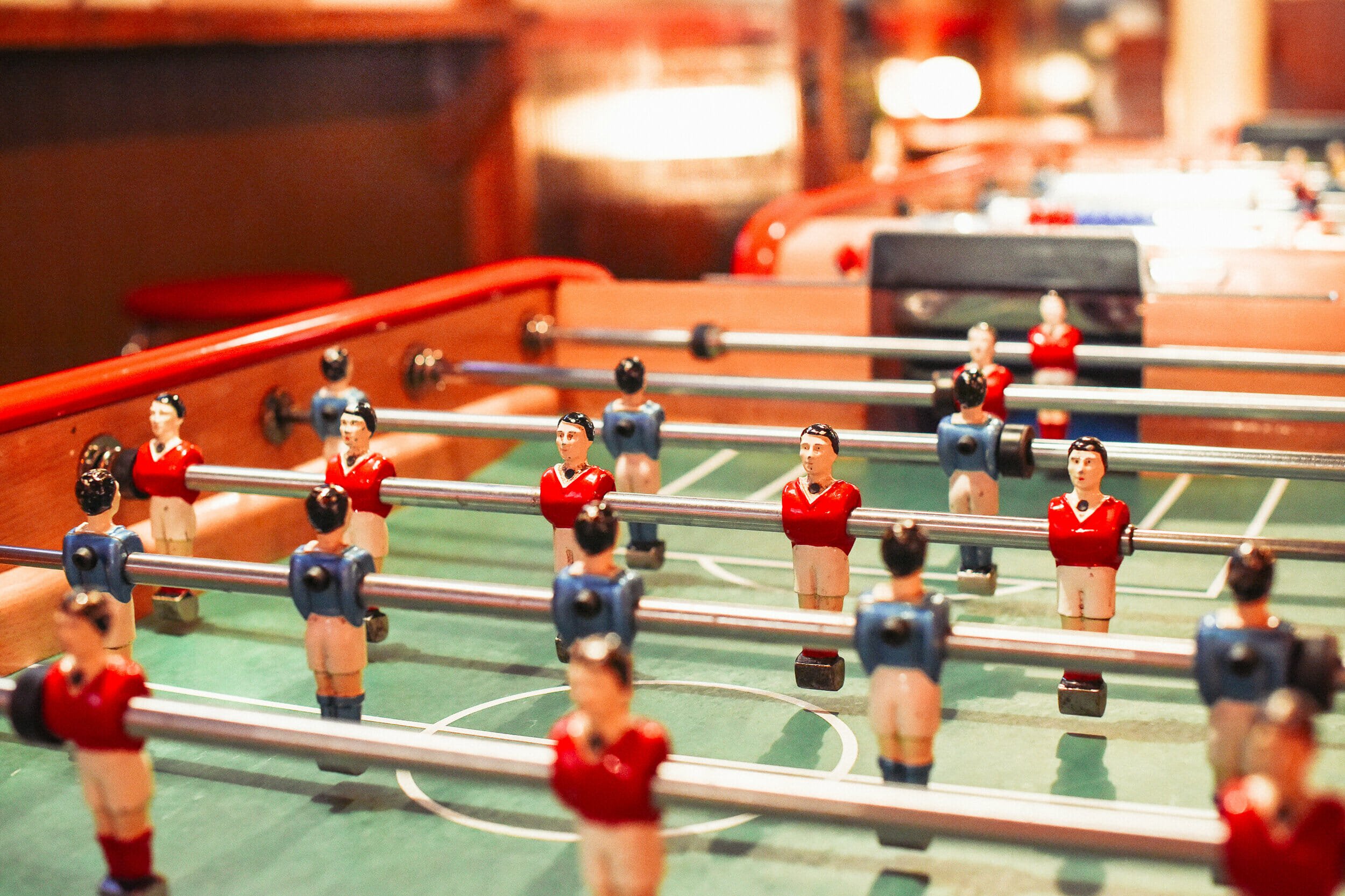 “Shoreditch royalty” would be a relatively adequate summation of Bar Kick. Then again, so would “a bustling, rambunctious football-inspired bar offering a menu of epicurean sandwiches, charcuterie and cheese, cocktails, beer, wine and – most importantly – foosball tournaments.”
Numbers?  Groups between 10-35 can reserve areas with 1 or 2 football tables. 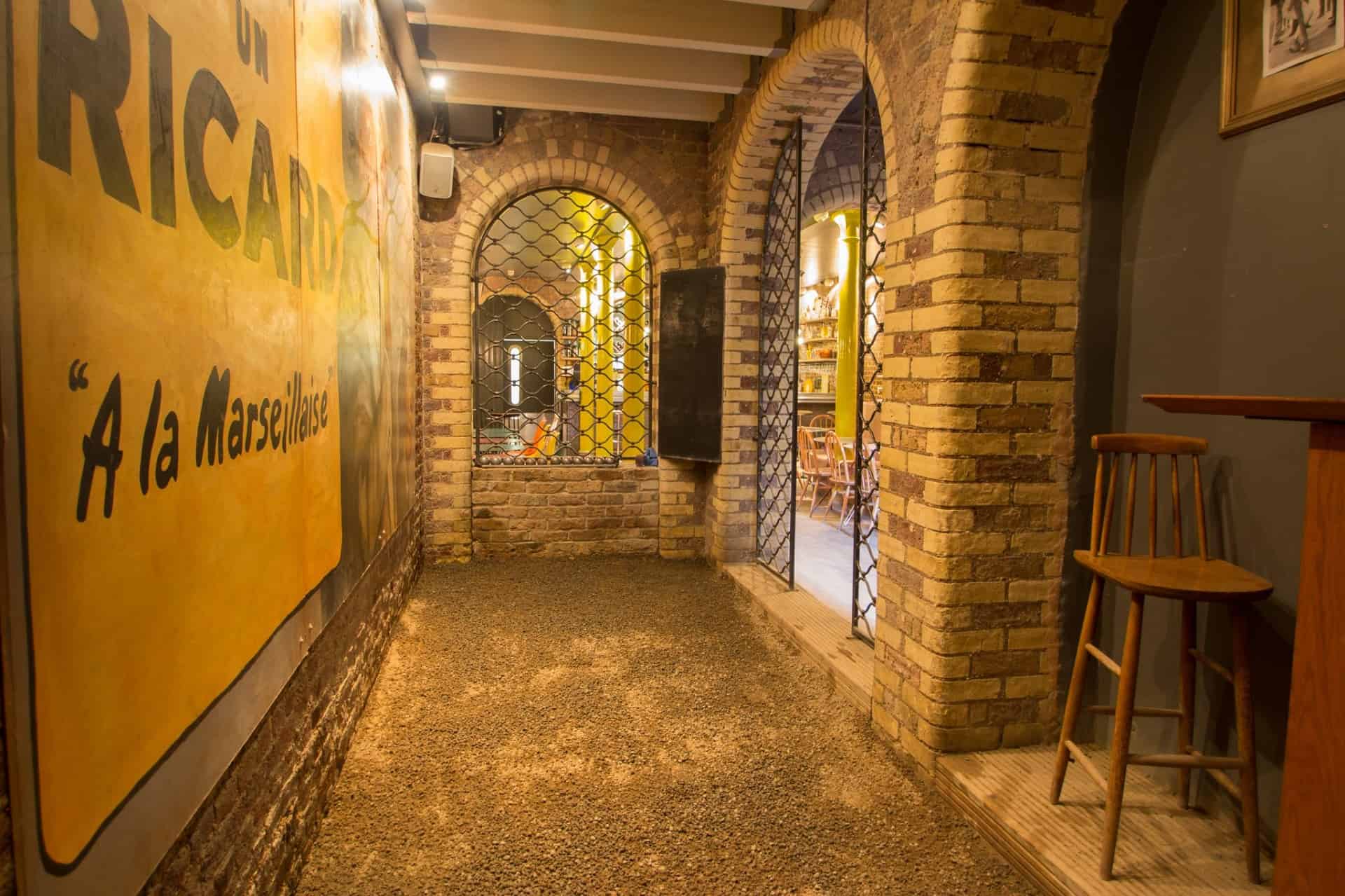 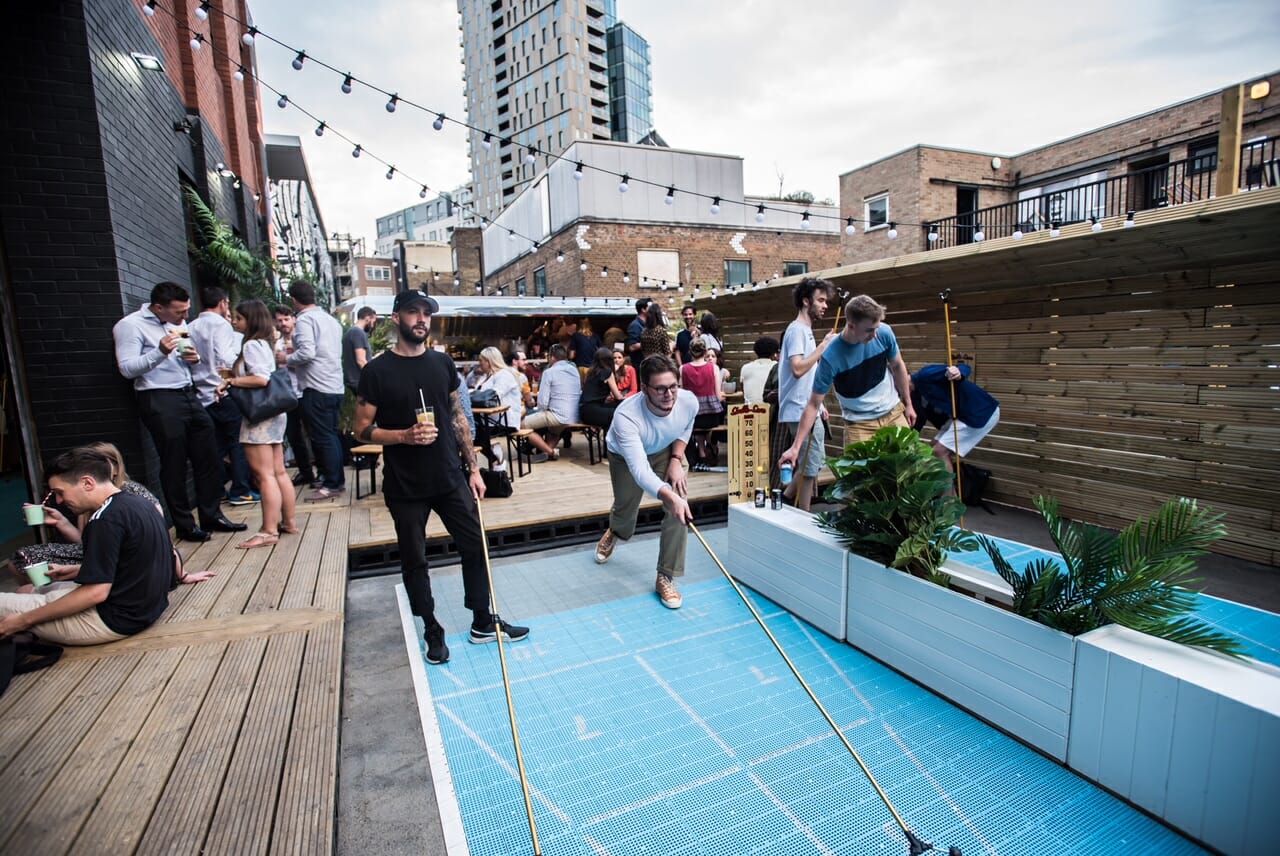 Shuffleboard is an unexpectedly addictive game. The Tudors had to ban it from the general public, because it was stopping them from doing useful things like going to work, and practising their bow and arrow technique. And they didn’t even have cocktails from an airstream caravan, freshly baked pizzas or DJs to go with it… READ MORE
Numbers? 4-8 people per lane, with 6 indoor and 2 outdoor lanes
– 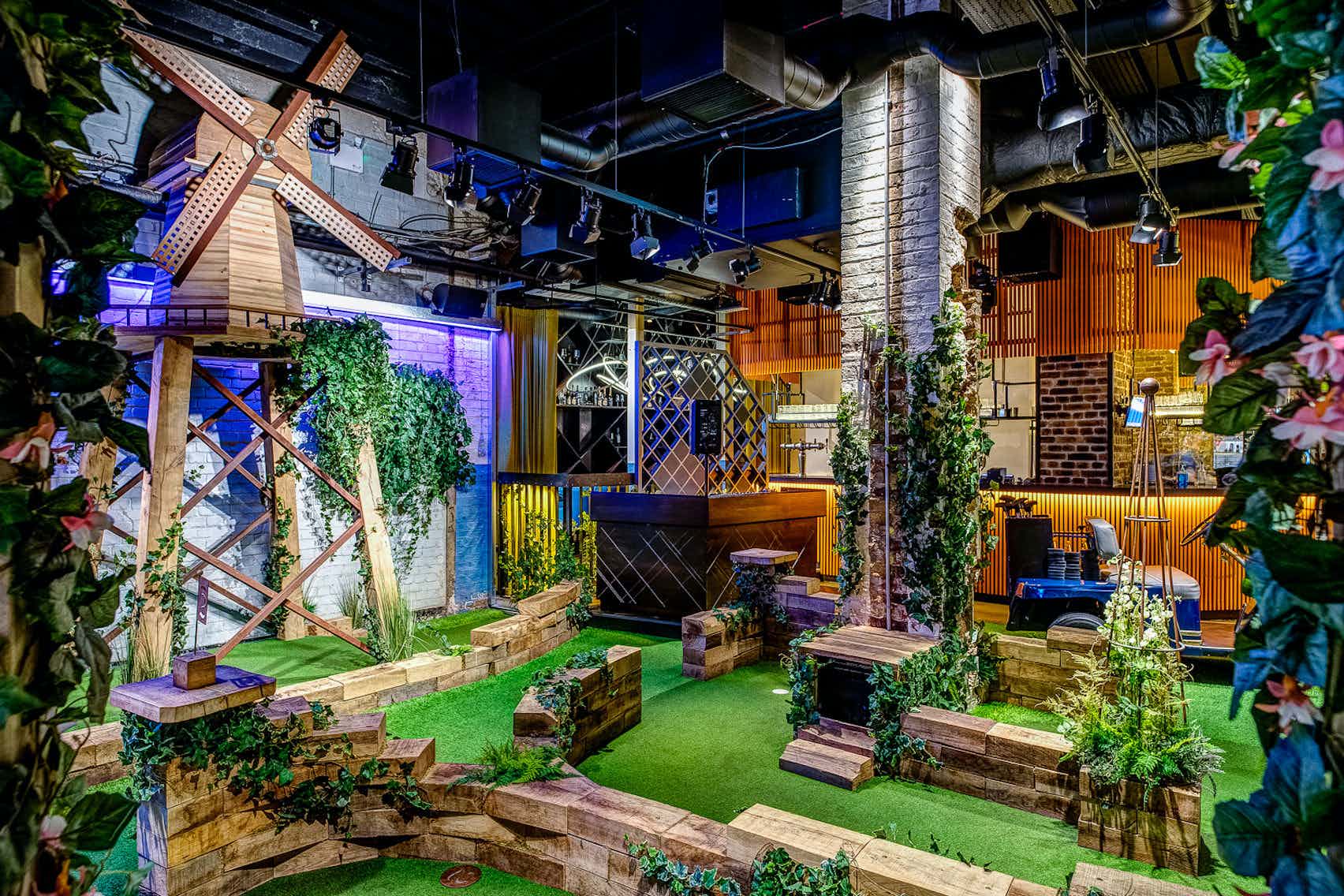 Swingers is crazy golf like a Ferrari is a way of getting from A to B. Each of their vast, beautifully decked out spaces have two golf courses, three restaurants, and – in the City – five bars. Yes, five. SWINGERS CITY | SWINGERS WEST END
Numbers? The place is vast, and they have private rooms that can be hired for groups of 12-500 people. The price is £13 per person, per round (peak) or £10 per person, per round, during off peak times (Mon-Wed, before 5pm).
– 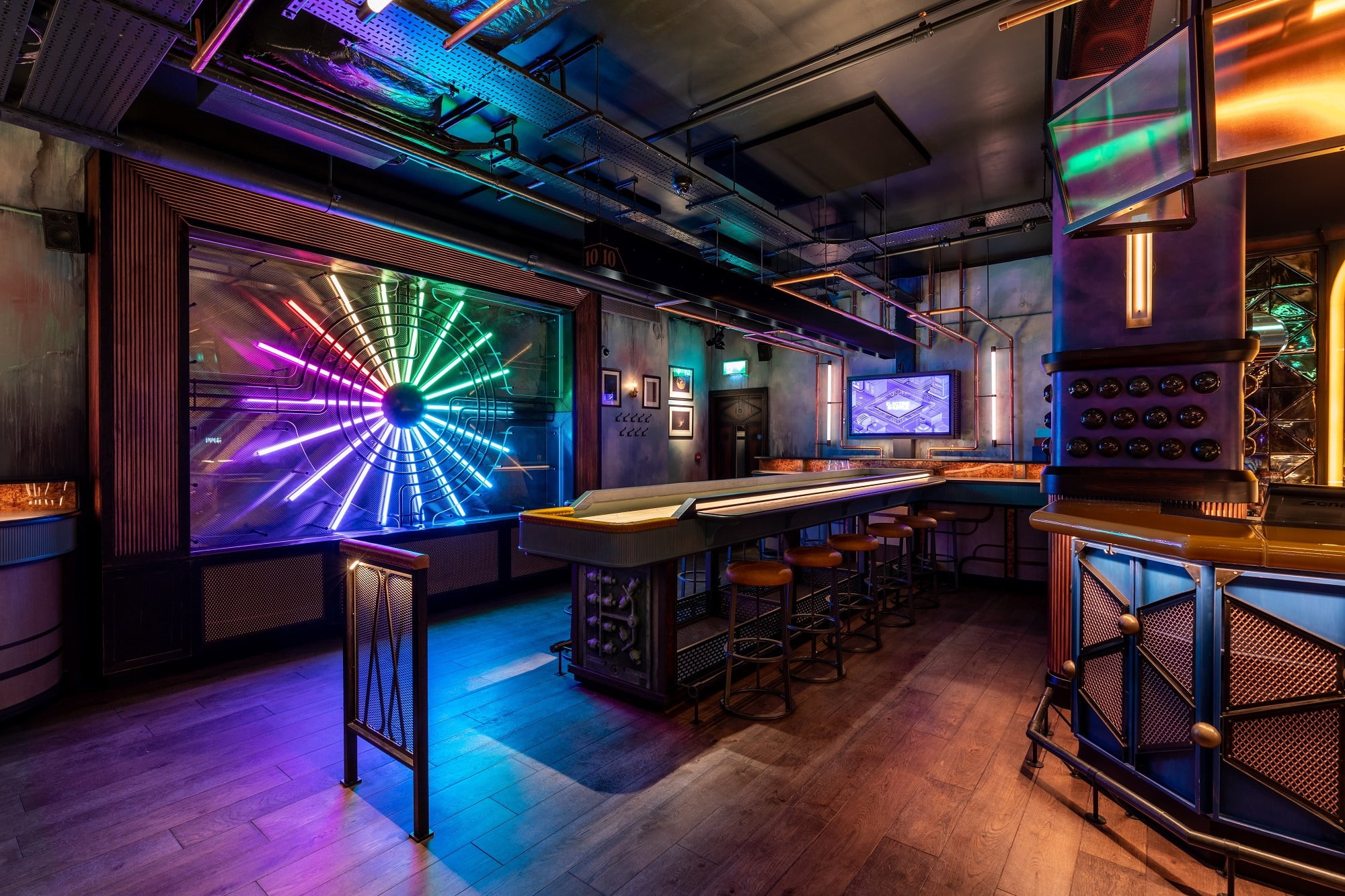 The team at Flight Club clearly know their target audience. They’ve branched out from darts to apply their unique mix of high-tech wizardry and alcohol to the game of shuffleboard. There are three teched-up versions of the game to play, and a steampunk-art deco bar to celebrate your victory in afterwards. And the kicker? They’ve got an all-new flagship in the extremely convenient location of London Bridge…  READ MORE
Numbers? It’s 6 people minimum per table, and numbers can go up to 350 if you hire the whole place.
– 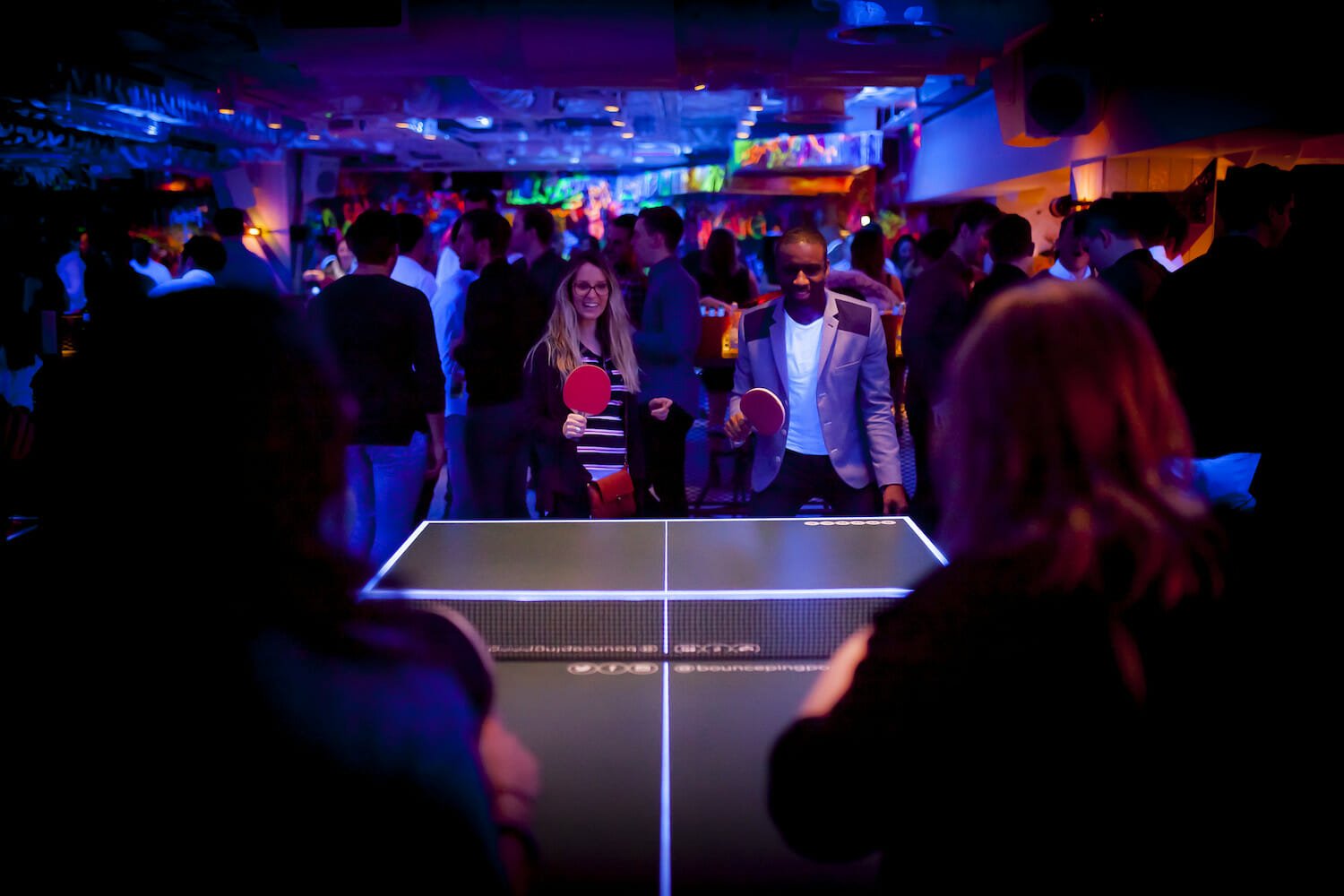 Set across two neon-drenched, Russell Sage-designed basements in Farringdon and Shoreditch, Bounce features an impressive 17 ping-pong tables, a 40 foot bar serving seasonally-inspired drinks, a DJ booth and a raised restaurant for overlooking the action. In short, if table tennis was fun before the addition of cocktails, music and all of your friends – which it was – then Bounce has done the nearly impossible, and actually made it better. READ MORE
Numbers? Basically anywhere from 2 people to, apparently, 500. You can book tables, or indeed an entire room of tables 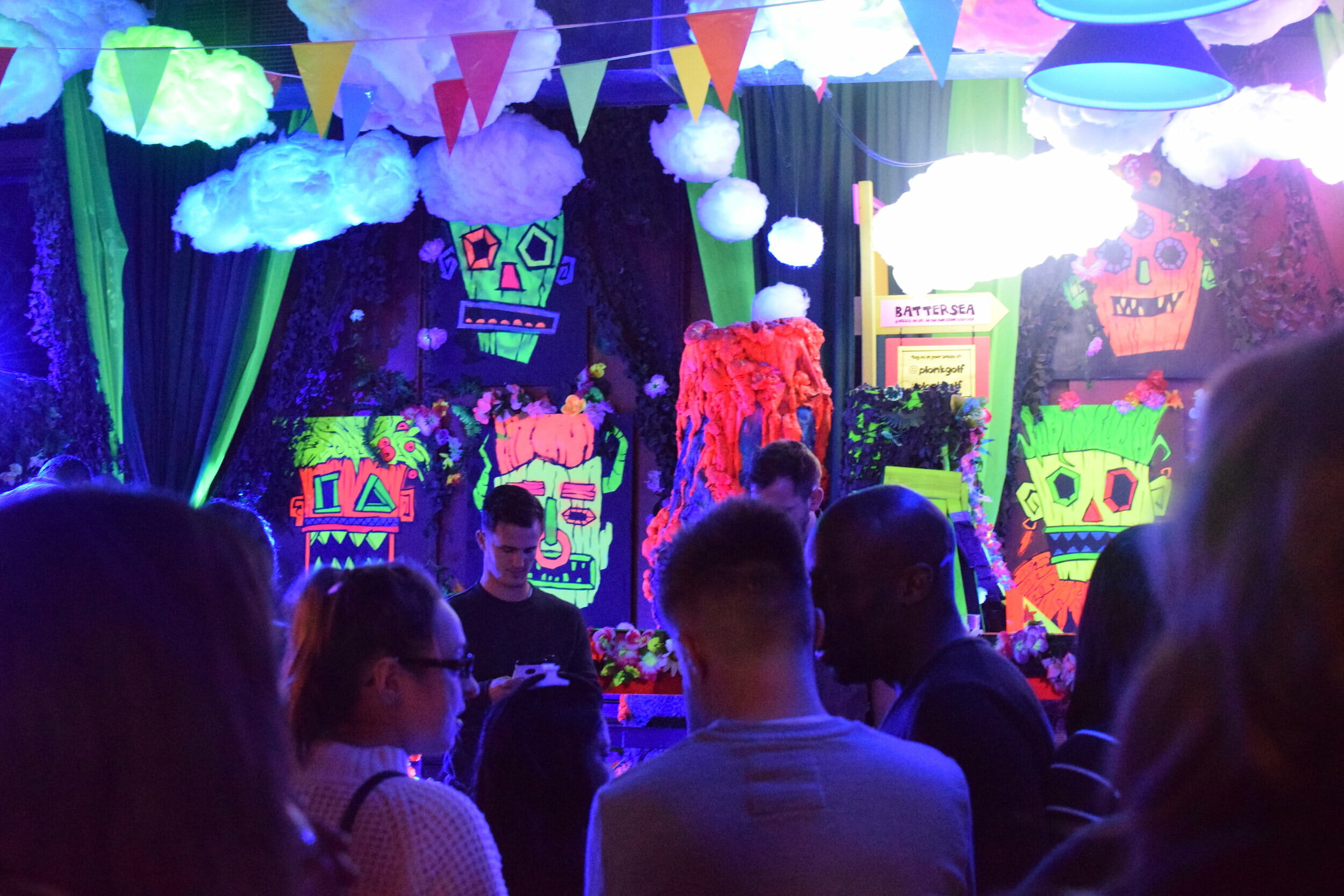 Most of your time at the Four Thieves will be spent trying to get out of there. That is, if you’re playing their in-pub escape room, Lady Chastity’s Reserve. The rest of the time, of course, will be amply filled by their retro arcade games, VR experiences, indoor blacklight crazy golf course aaand epic remote control car-racing game. READ MORE
Numbers? The escape room has a max of 6 players at once, and that’s probably a sensible number for the other activities, too.
–

Karaoke Bars in London | Across London 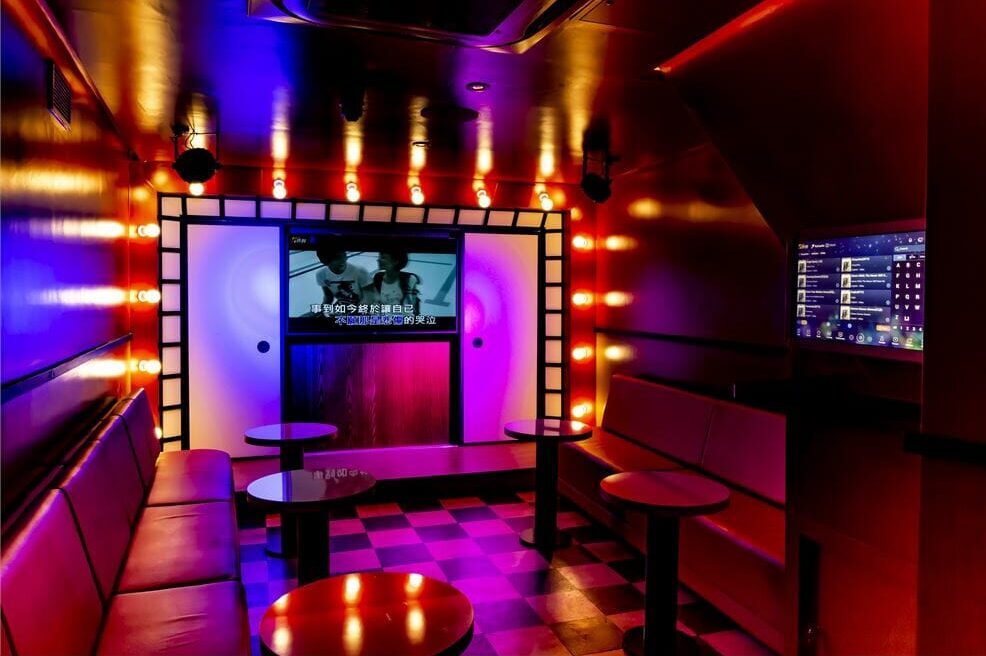 Karaoke is a legitimate sport. It requires skill, determination, perseverance and finally, alcohol. And to bring all that together, you need one of these excellent bars, where you can book a private booth, pay per person, and bring all manner of cocktails into said booth… SEE ‘EM ALL
Numbers? Some of these joints fit up to 30.
— 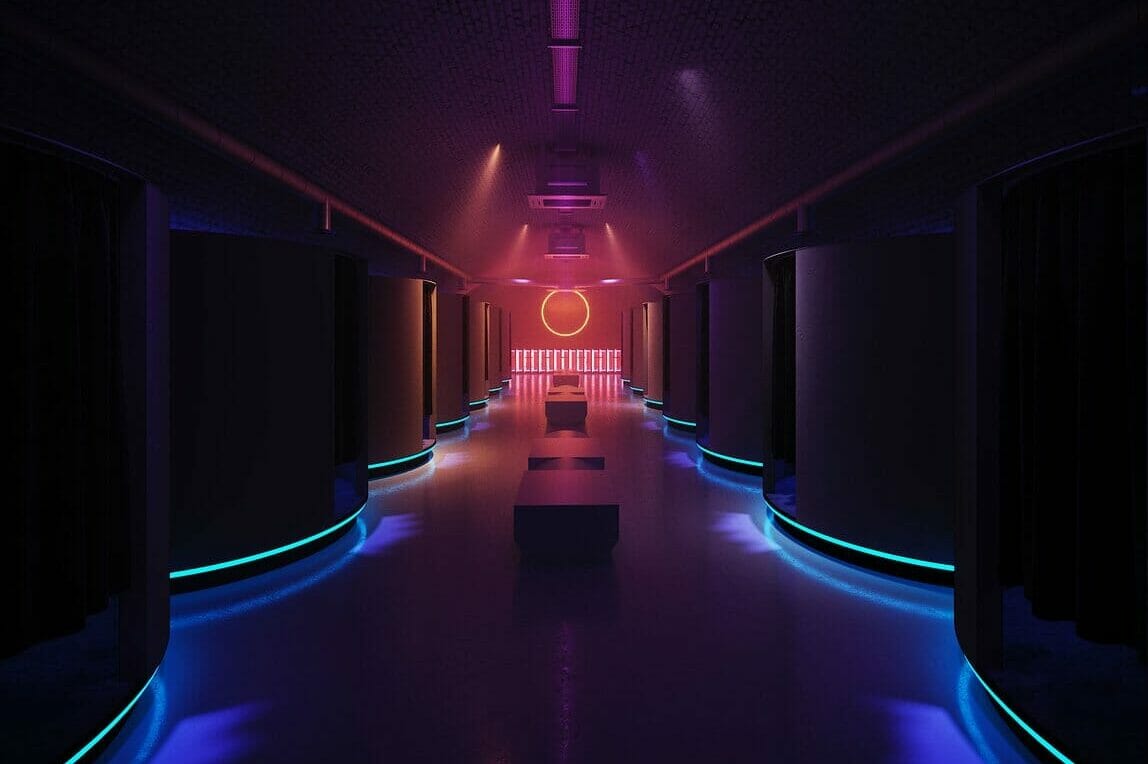 An immersive, virtual reality arcade & bar both in an old East London railway arch, or in Victoria. There are 16 different games to choose from, as well as pizza and cocktails designed by an ex-Milk & Honey mixologist in Haggerston, and a self-pouring cocktail bar in Victoria. READ MORE.
Numbers? You can go solo in your own immersion booth, or hire out the whole arcade for up to 60 people.
– 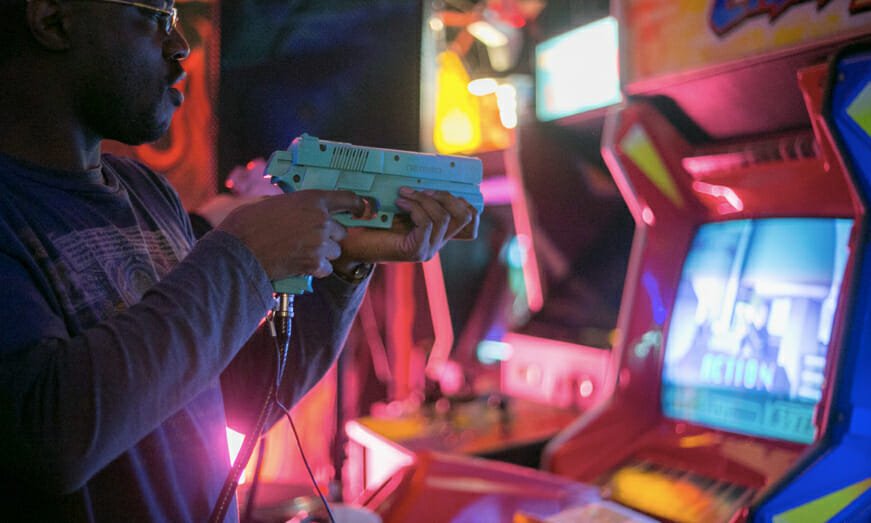 A retro bar / pub specialising in all your classic misspent-youth arcade and video games like Pong, Asteroids, Tron, Pac Man and Streetfighter II, on all original, vintage machines. They’ve got venues in Peckham, Hackney Wick, and Elephant & Castle, and they’re like a kind of ’80s time machine. READ MORE
Numbers? You can rent the entire console room for between 5 and 25 people.
– 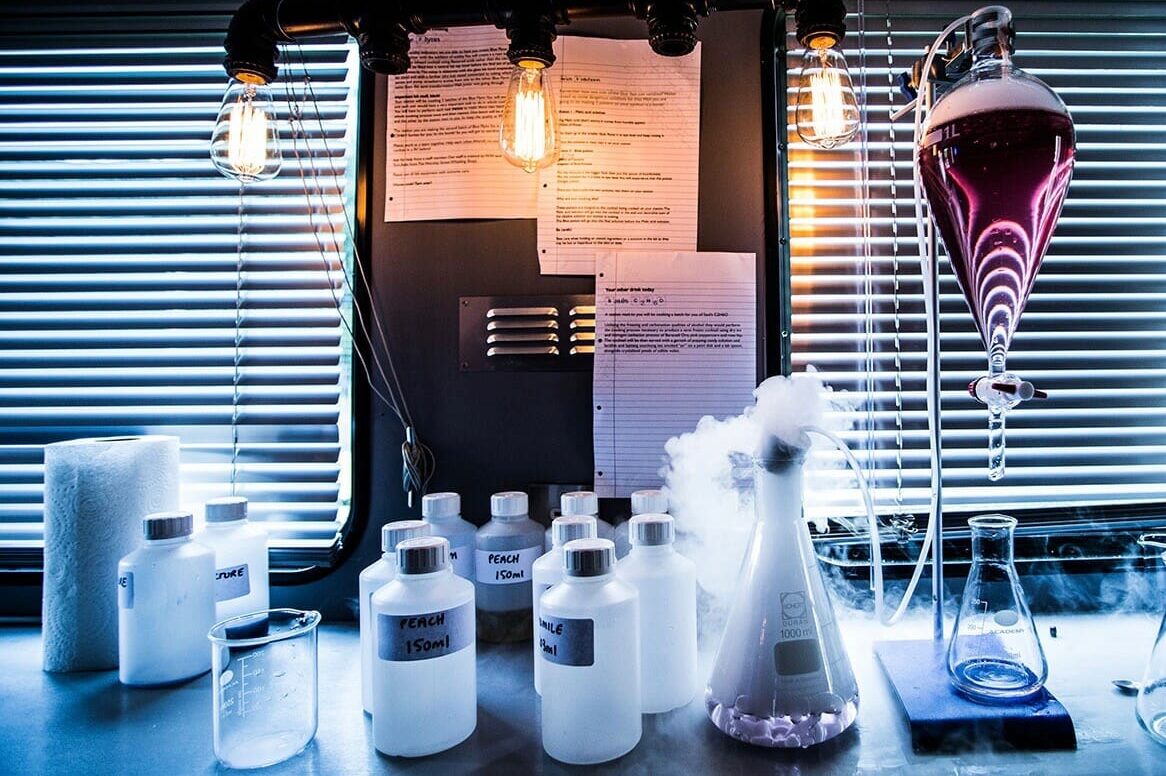 Step into the Breaking Bad RV, filled with yellow boilersuits, ‘cooking’ equipment, and a boatload of cocktail recipes for drinks that smoke, bubble and change colour. READ MORE
Numbers? Between 30-35 in the RV, and up to 200 in their new venue.
– 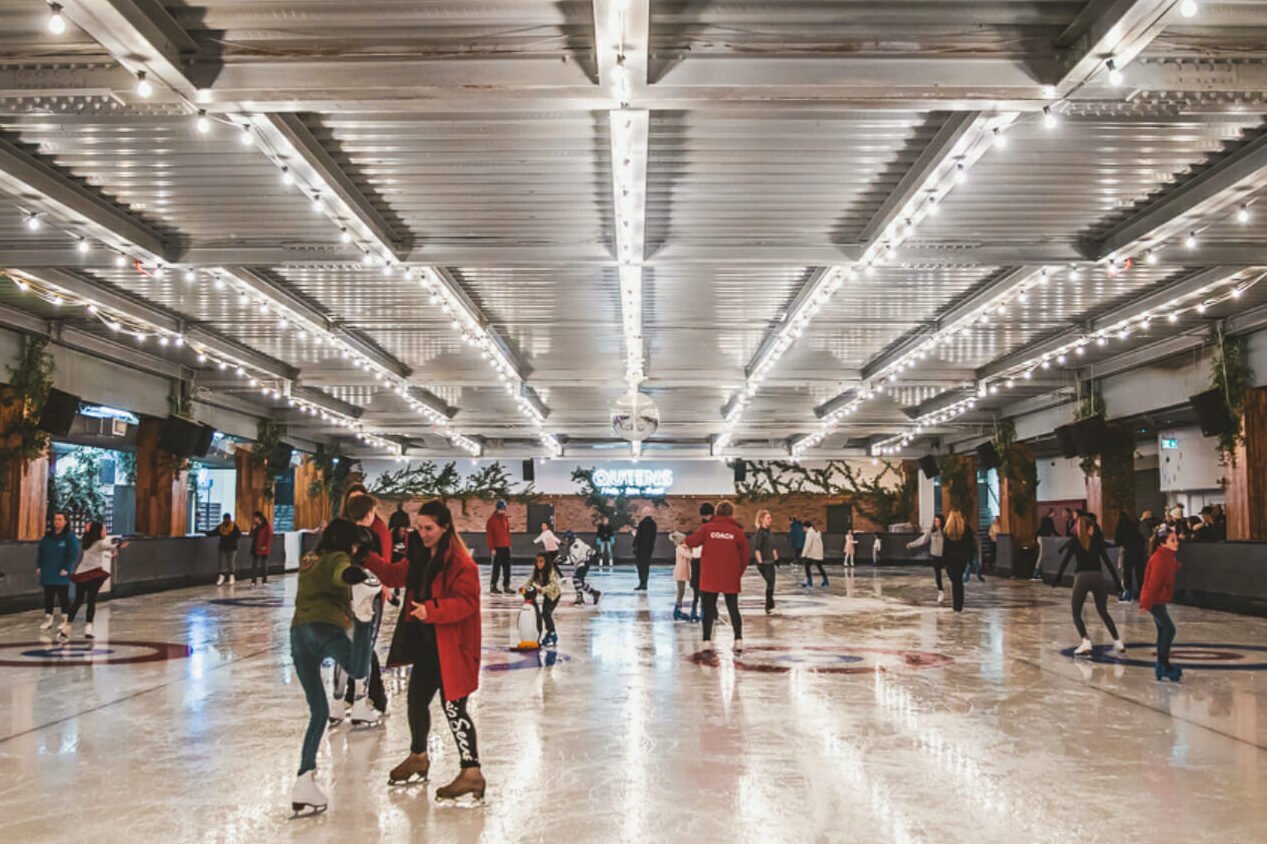 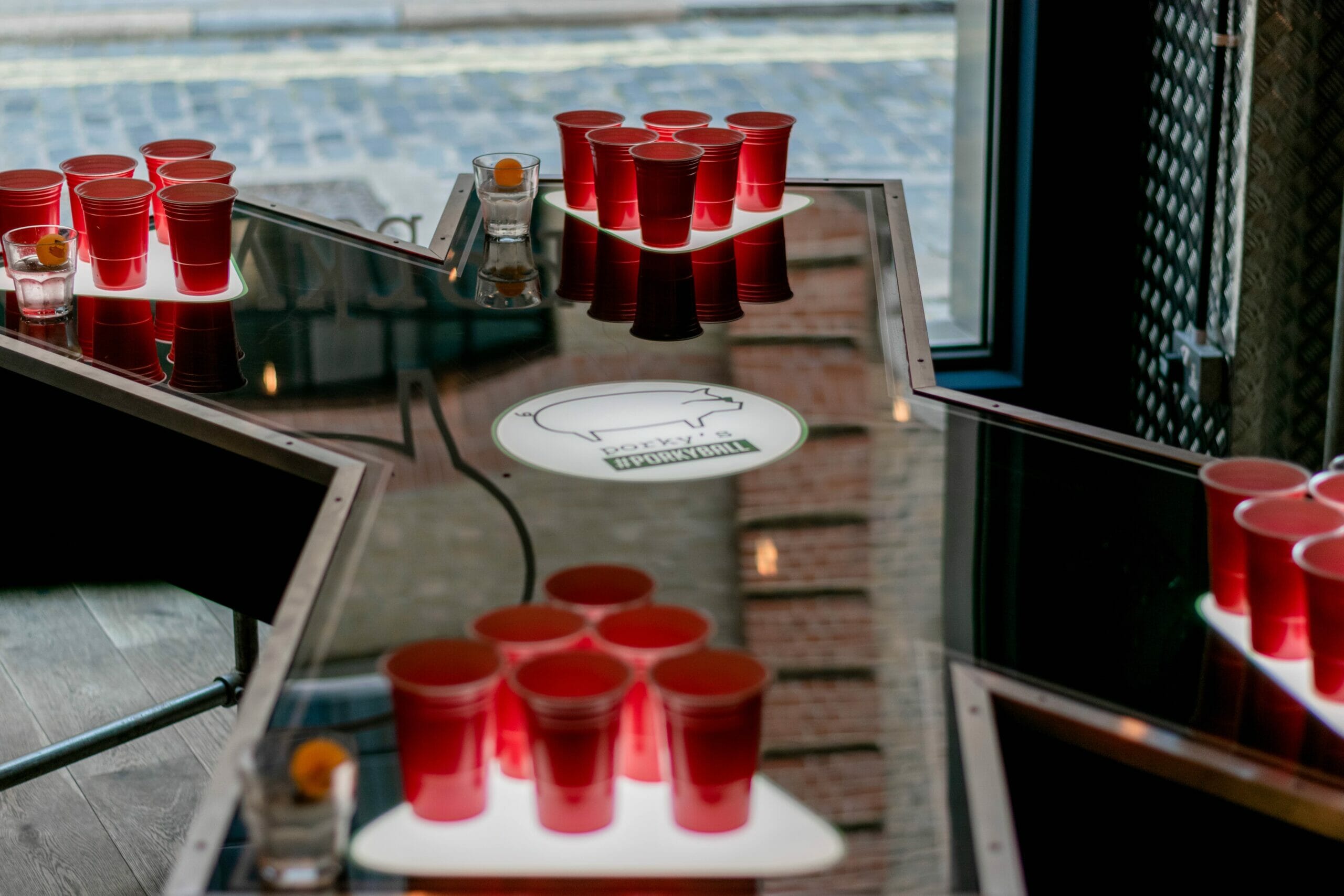 BBQ & Beer Pong on custom-made tables.
Numbers? Maximum 8 players per table. But they have a lot of tables.
– 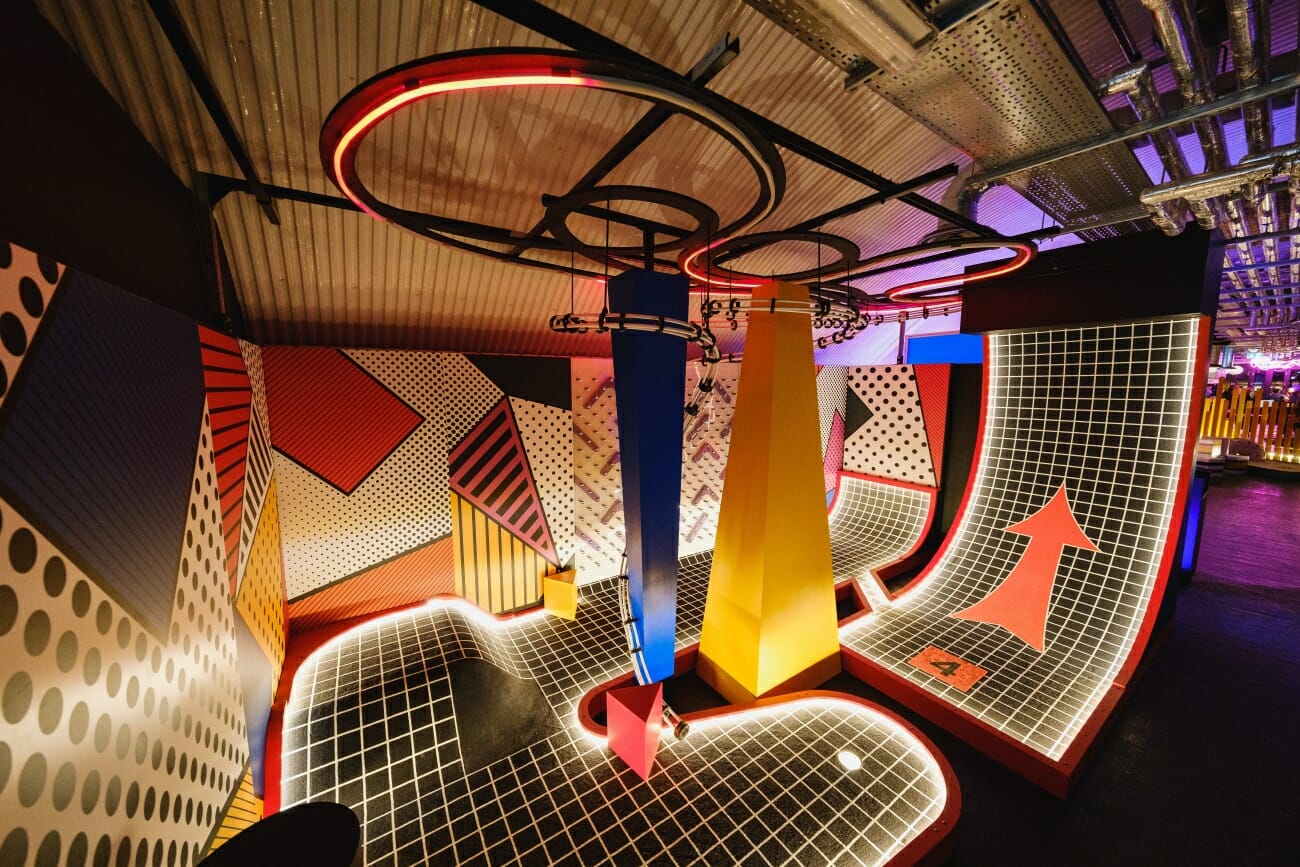 Birdies Battersea in a word: surreal.

Birdies Battersea in twenty nine words: a truly crazy crazy golf experience in which each of the nine colourfully abstracted holes seems to be designed to derail your senses even more effectively than the cocktail bar.
Numbers? You can squeeze up to 4 people on a hole at the same time, but you can have a few groups following on from each other. It costs £12pp at peak times (£10 off peak).
– 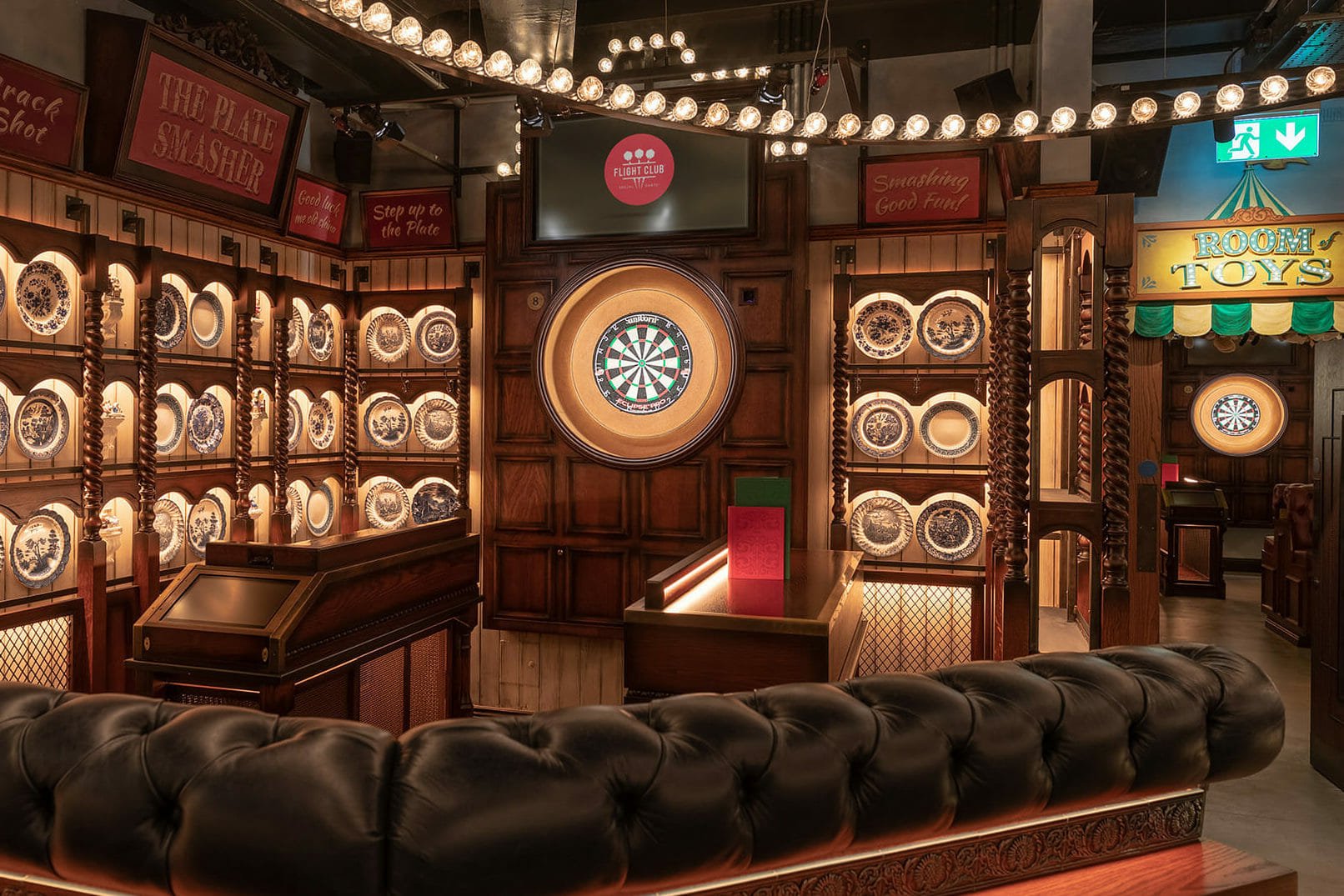 From the competitive minds behind both Bounce and All Star Lanes, FC boasts animated, automatic dartboard scoring; virtual guides; a collection of fast-moving games; pizza boards and canapés; and touch screen interfaces invented by a rocket scientist. Oh, and booze. READ MORE
Numbers? You can book for up to 400 people, but it’s probably best to stick to under 40.
– 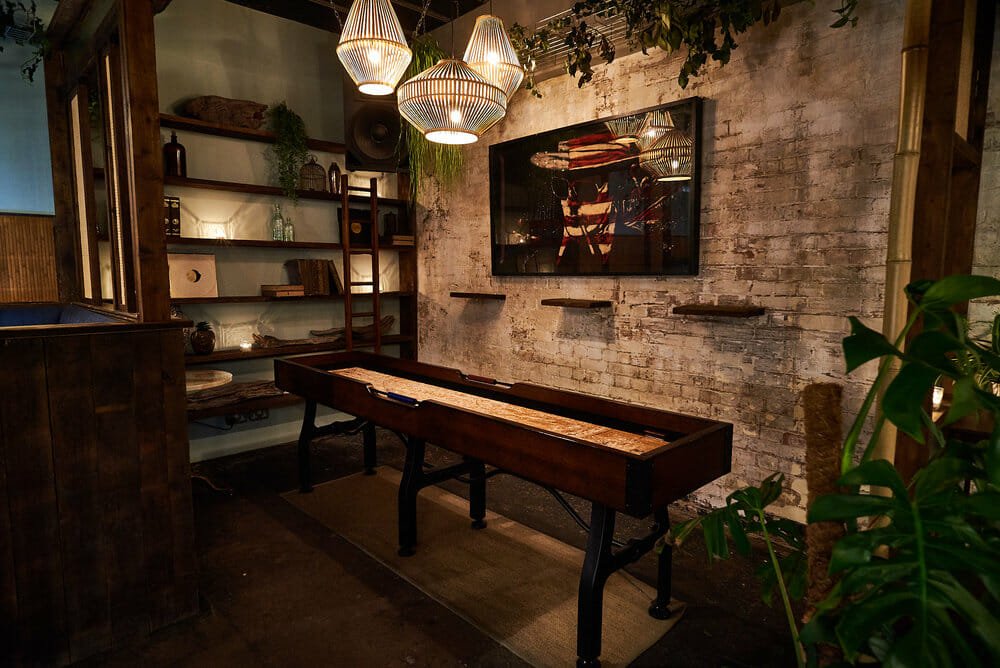 Nine Lives is all about zero waste – even the pith from the lemons used in their cocktails is recycled to make soap for the bathrooms. So it makes sense that they’re not wasting any part of their stylish bar space, either – by installing a tabletop shuffleboard in a secluded corner. READ MORE
Numbers? Up to 8
– 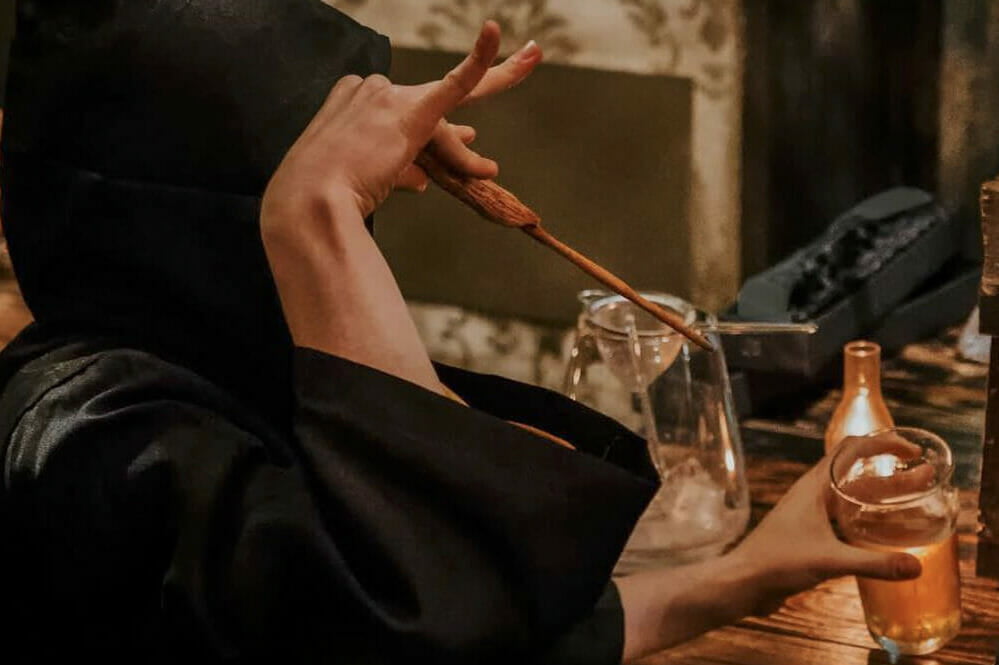 A pop up bar where you’ll don robes, grab a wand, and create molecular cocktails using magic and/or science. Expect cauldrons overflowing with smoke; colour-changing cocktails; and beer from a tree… READ MORE
Numbers? Up to 80
– 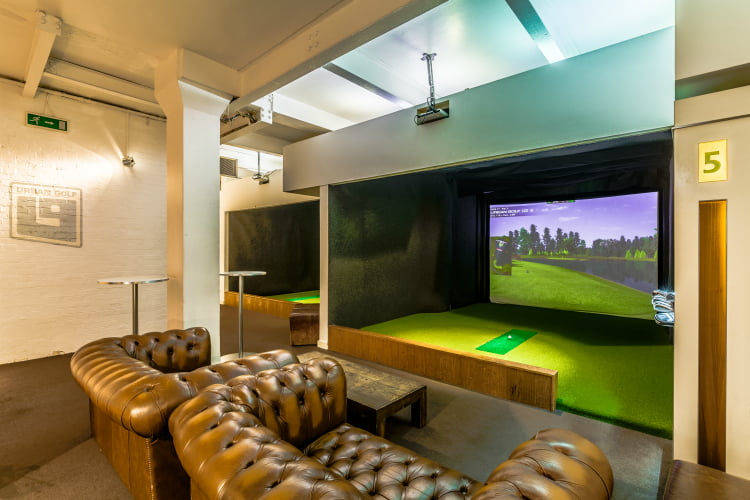 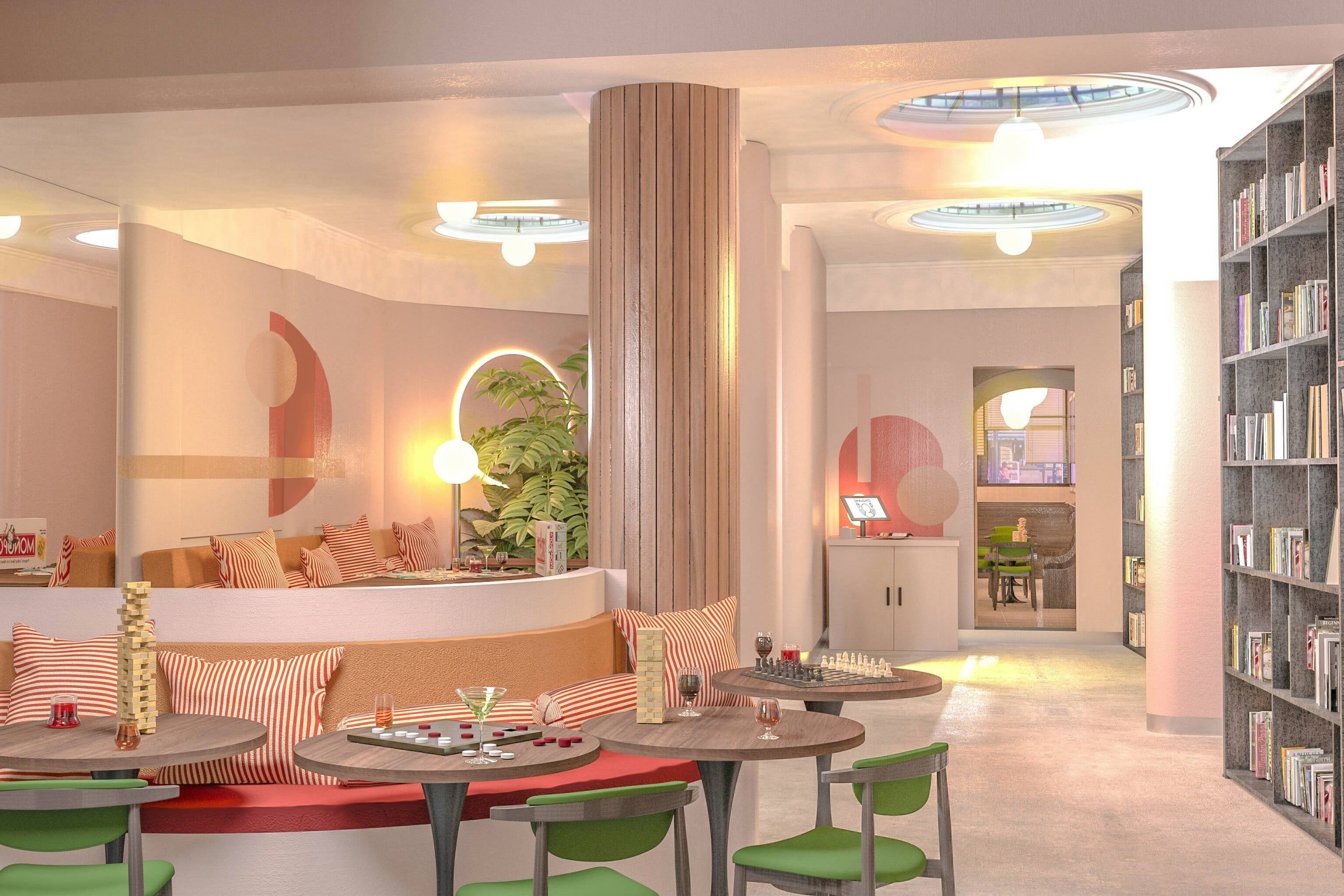 A partially crowd-funded board game café in an old Dalston pie & mash shop and the archways beneath Waterloo station, stocking more than 800 games and a much smaller selection of local craft beers, ales, ciders and wines, as well as homemade baked goods. READ MORE
Numbers? You can book for up to 8 people, which is about as many people as you can squeeze around a decent sized board-game…
– 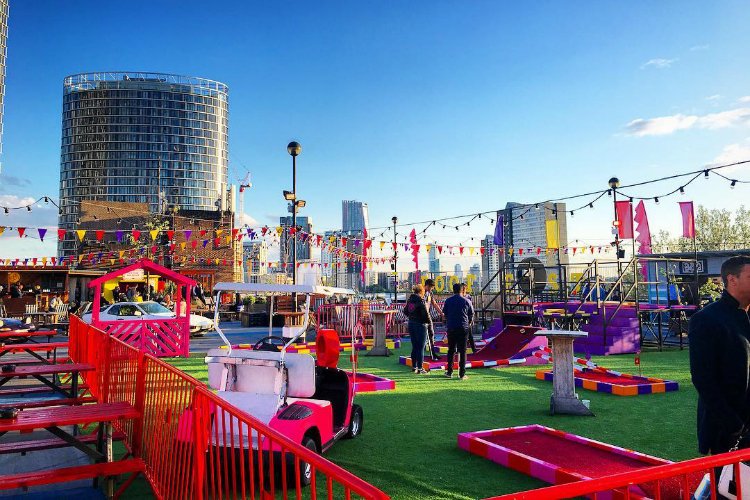 As the old saying goes, the best things come in fours, so Roof East are thoughtfully providing you with entertainment in the form of lawn bowls, crazy golf, baseball batting cages, and table games. Oh, and it’s all up on a roof. READ MORE

Numbers? Up to 6 players at a time on pretty much everything.
NOTE: Roof East is currently closed for the winter.

Looking for somewhere a little more sedate? How about a place for classy birthday drinks…

How Did London Become The World Capital Of Food? We Talked To One Of The Chefs That Made it Happen... Endo Kazutoshi talks about destiny, responsibility, and fish….