Welcome to the year of the rabbit.

And as we all know, the rabbit is considered to be the luckiest of all the animals in the Chinese Zodiac calendar, a fact which could easily be dismissed as mere superstition…

…until you see the sheer breadth of Lunar New Year events, supperclubs, pop ups, parades, and banquets going on in the capital over the next couple of weeks, and it occurs to you just how truly lucky we all are to be able to do this stuff. So, from lion dances, to dragon-shaped sharing cocktails, to delicious little buns that look like tangerines, here are the best things going on for the Lunar New Year right here in London. 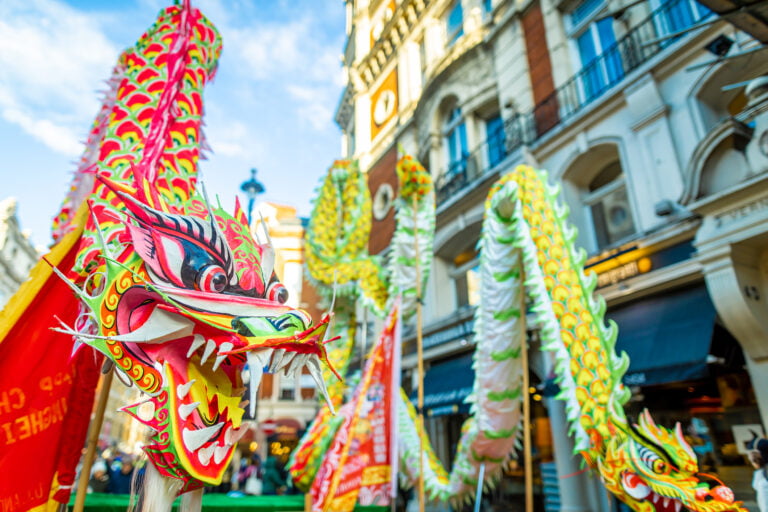 This is probably the grandest way to spend Lunar New Year in London – because outside of China, this is the biggest Chinese New Year’s parade in the world. So yes, it’s pretty f**king impressive. And this year there’ll be over 50 teams doing the impressing with dragon dances, live music, acrobatics, pyrotechnics, martial arts displays, street food and more. Things usually kick off at 10am, and work their way from Trafalgar Square through to Chinatown, and onto Soho. 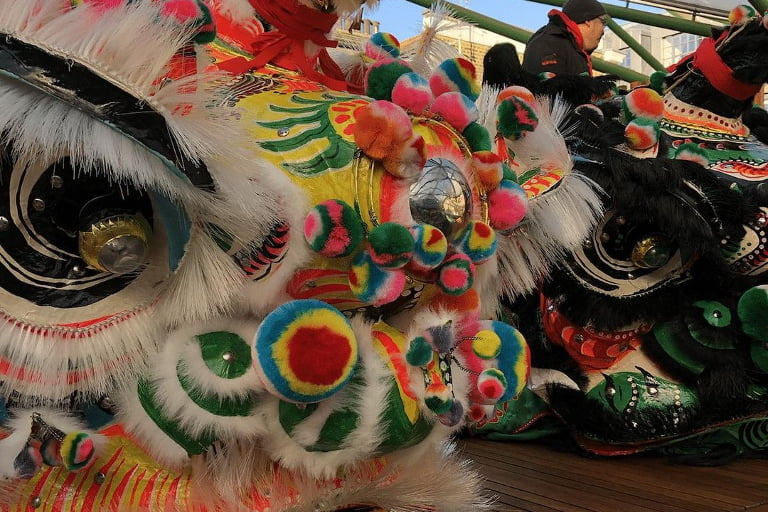 Borough Market‘s own Malaysian clay pot cooking expert LiveJoli has arranged for a whole pride of lion dances to roam freely throughout the market itself on the Saturday before the official Lunar New Year. They should go well with all the roar ingredients. 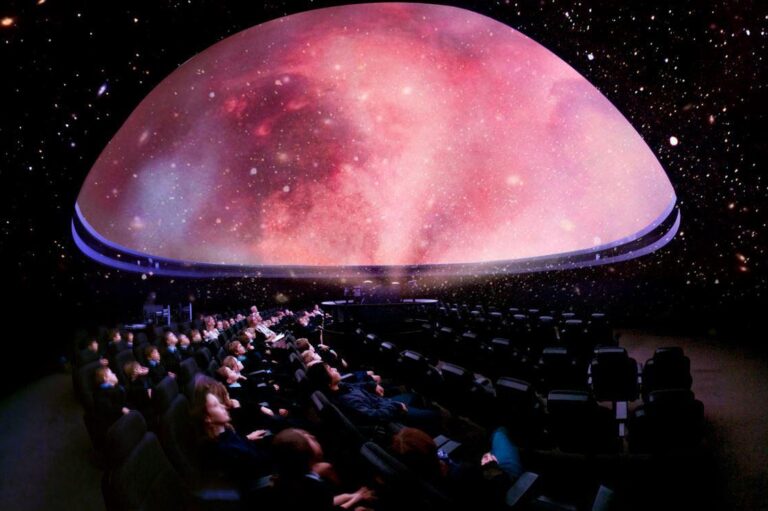 The National Maritime Museum are reallllly pushing the boat out on this one: they’re putting on Lion Dances throughout the day, as well as talks, tours, planetarium shows, and an extraordinary light display projected onto the side of the building as the sun goes down. 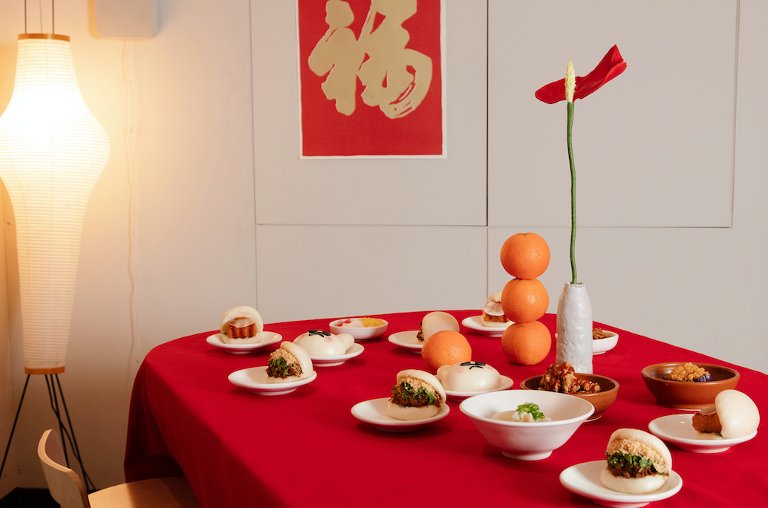 The famed Taiwanese bun-slingers at BAO are getting in on the Lunar New Year action by putting on feasts in their private dining rooms – groups of just 6 or more can lavish themselves with house pickles, BAO, dumplings, fried chicken, scarlet cha shao gammon, pumpkin, and sweet red bean Rabbit baked goods… and it’ll only set you back £39pp.

Tent At The End Of The Universe 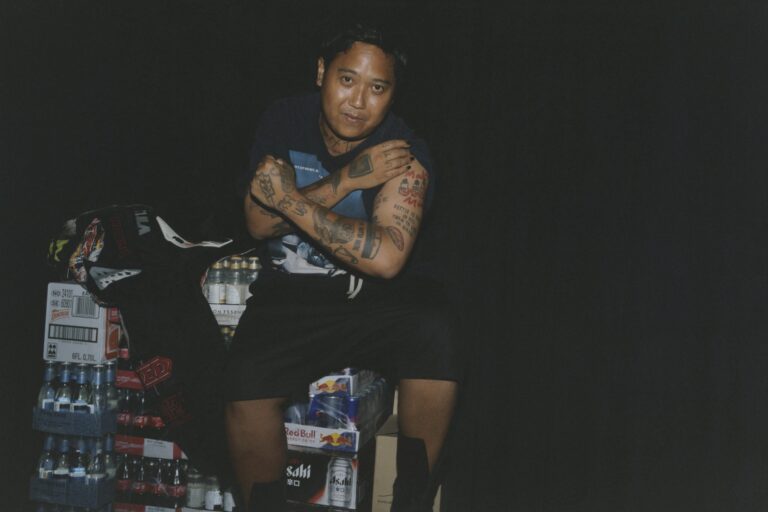 Chef John Javier made his name creating elegant little Chinese dishes back in Hong Kong, so he’s going to be making some elegant little Chinese dishes for the Lunar New Year here, too. They’ll be on the menu for a week (after he debuts them at his new all-day Sunday party) and you can expect pork & prawn siu mai; Chongqing chicken wings; typhoon shelter cauliflower and roasted bone marrow with XO sauce & deep-fried bao buns. Yes, deep fried bar buns. 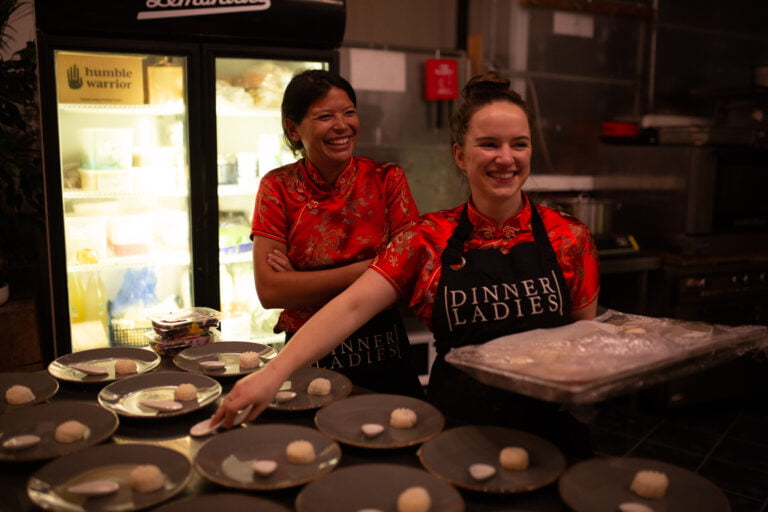 These aren’t your bog standard, run-of-the-mill, average, ho-hum, ordinary, school-grade dinner ladies. This female-run team have been cooking up storms since 2015 for anything from game-themed supper clubs in the woods to film shoots. This year, they’re back with their Chinese New Year supper club; they sell out every year, but they’ve just release a limited number of tickets for their second night. You can expect a long banquet table, a vegetarian menu inspired by Emily & Lily’s (the leading ladies) time living in China and a play on China’s famous dish, Century Eggs …which we presume has been a long time in the making.

The Science Museum are celebrating the Lunar New Year in full sight of the moon itself with their Lates – you’ll get to watch China’s first animated feature film from 1941, Princess Iron Fan, you can hear about the secrets of the Terracotta Army, take a zodiac animal trail, earn Chinese calligraphy, hit a silent disco, and a lot more…

Mama Chen’s at The Gantry Hotel 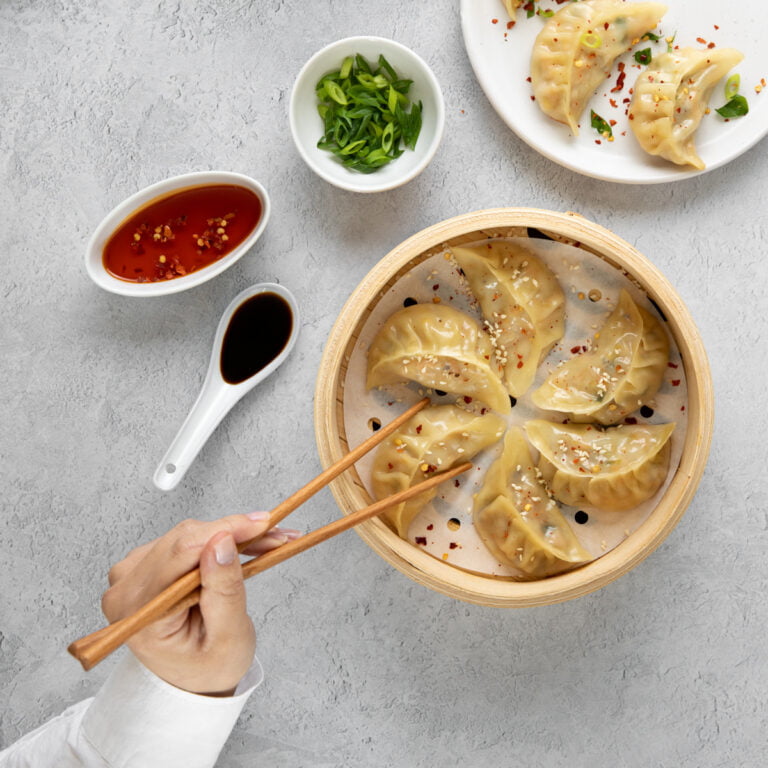 Mamma Chen’s is a three month pop up that’s landed at The Gantry Hotel in the lead up to spring. It’s actually named after Chef Michelle Liu’s grandmother, who taught her a great deal of the recipes that she uses for her chive & prawn dumplings, pork wontons with chilli, and spicy noodles coated with crunchy garlic & numbing Szechuan oil. The team will be honouring the lunar New Year by decorating the ground floor with Chinese lanterns and throwing some special dishes onto the menu… 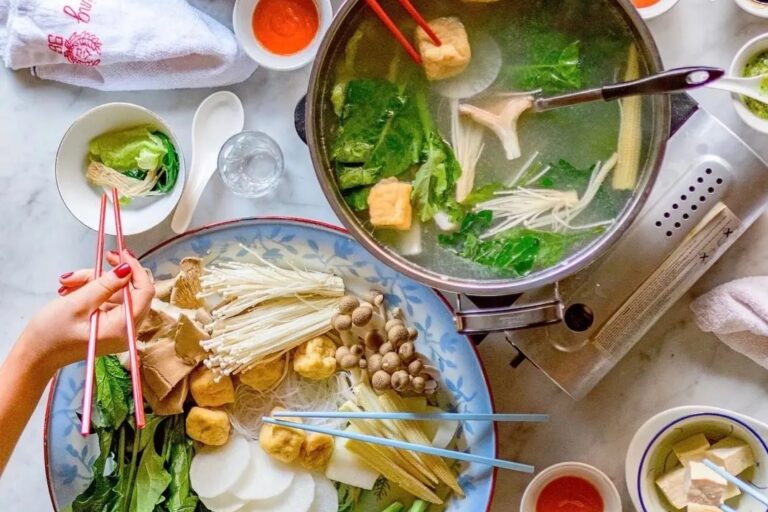 To be clear, this isn’t a feast on a steamboat. Sorry. But it’s still going to be pretty special, given that it’s being laid on by the legendary Michelin Starred Chinese restaurant team at Poon’s. You’ll get massive, steaming bowls of simmering broth (hence the whole ‘steamboat’ thing) from which you can pluck out fresh seafood, marinated meats, Chinese vegetables, tofu and glass noodles, which can all then be seasoned with Poon’s famed ‘Extraordinary Chilli Oil’ and their signature ‘WO Sauce’. 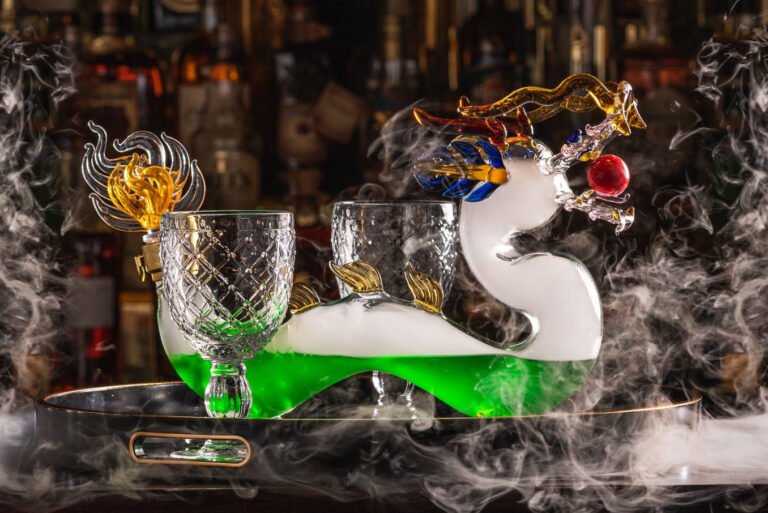 Tattu are marking the occasion by decorating their already amazing-looking restaurant with hanging lanterns & “ruby red trees”, as well as putting on a special sharing menu of modern Chinese dishes (yellowtail sashimi, honey roasted Chilean Seabass, caramel soy aged beef, etc.), all culminating in a special Sunday brunch on the 5th February with live lion dancers. Oh, and that amazing looking Drago thing? It’s a sharing cocktail called a Dragonboat Firecracker that you’ll also be able to get. It comes with gin, umeshu, toasted almonds, and its own firework. Yes, firework. And you’ll also get a red envelope called a ‘hong bao’ to bring good luck, too. Which you’ll need to avoid getting set on fire, presumably.


Note: As a bonus throughout January, you can get 30% off food Sunday to Thursday all day and Friday until 5pm. All guests will need book in online and quote Tattu30 to get the discount.
– 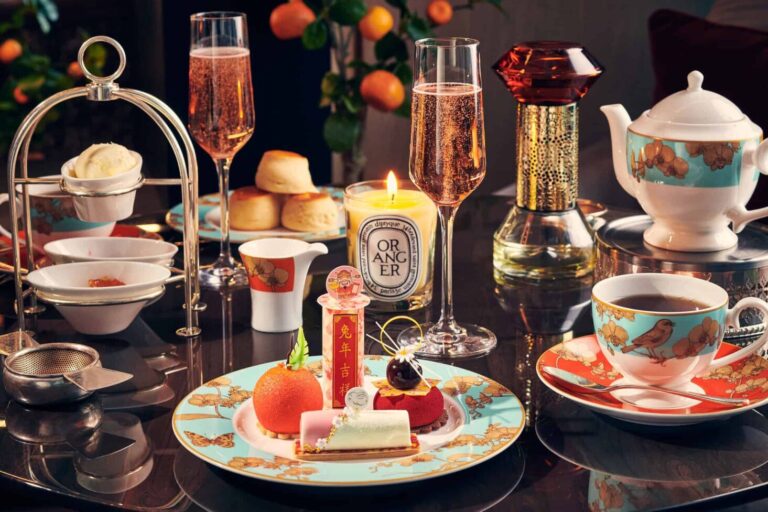 Never has there been a better example of Anglo-Chinese cultural & culinary fusion than in the phrase ‘Lunar New Year Afternoon Tea’. And that’s exactly what the team at the Pan Pacific hotel are cooking up as of this month, throwing in lobster buns, passionfruit pastries, and delightful little Prosperity Boxes.

Hutong At The Shard 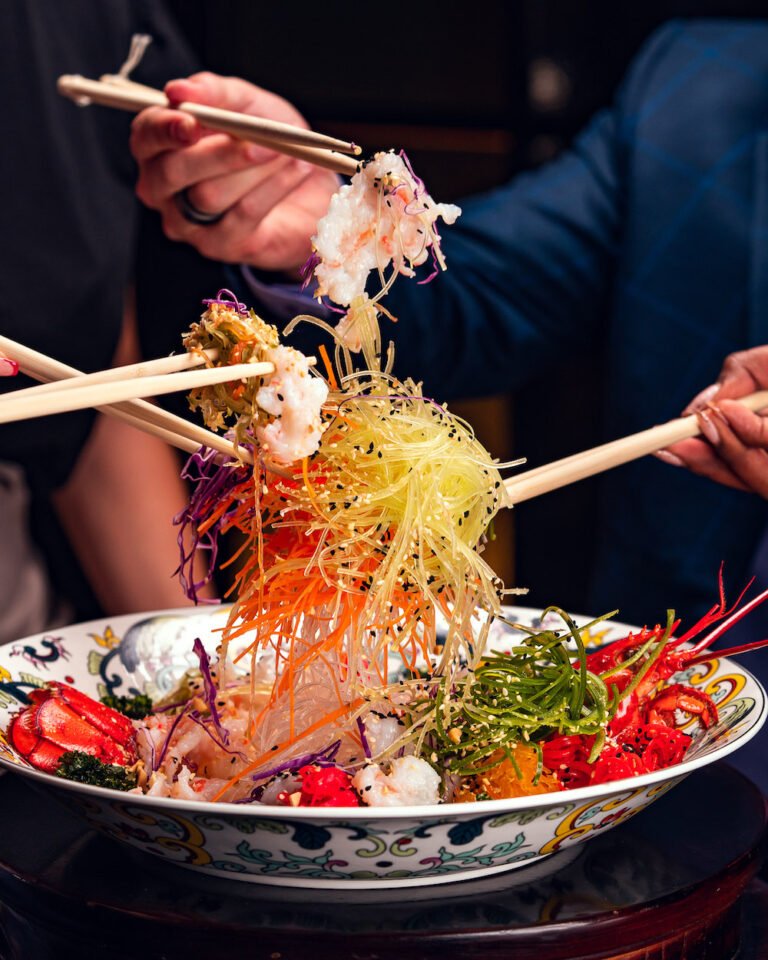 Sure, when you go to Hutong way up at the top of The Shard, you’re paying a fair premium for the view – but you’ll also get a decent meal out of it too. And this Lunar New Year, they’re treating your other senses too, by putting on a five-course feast of Lo Hei salad alongside Sichuan tiger prawns and roasted Peking duck. And as an added bonus, there’ll be entertainment from a Chinese calligrapher, as well as traditional lion dances – just to make the view that little bit more special. 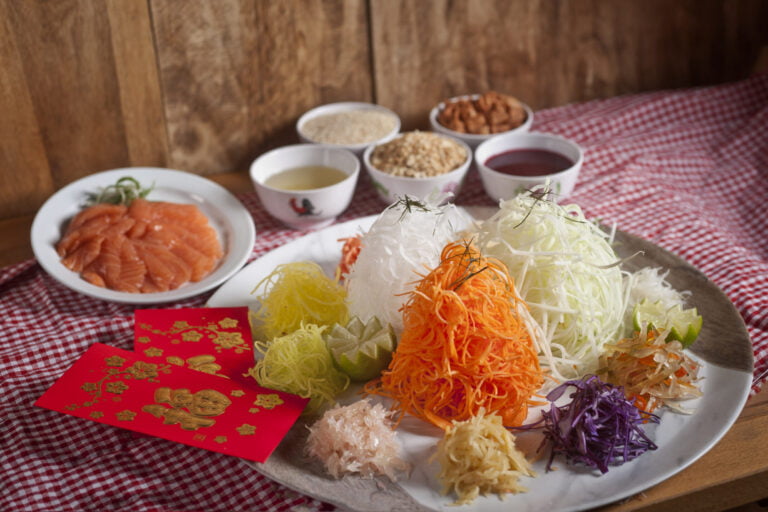 Slapped right in the centre of Chinatown, the Singaporean restaurant Rasa Sayang is going to be offering a traditional Yu Sheng. In Singapore, that’s the equivalent of a turnkey dinner at Christmas, and it consists of an elaborate array of fish, vegetables, sauces, and condiments all of which bring their own symbolism & significance to the table. And it doesn’t hurt that they’re delicious, too. 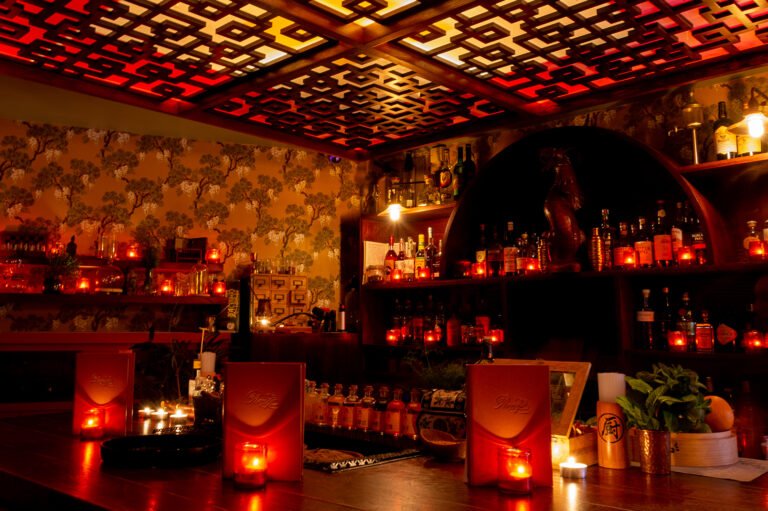 Despite being right in the heart of Chinatown (hidden behind a jade-green door on Gerrard Street), and despite having a menu entirely consisting of dim sum, the cocktail bar at Opium doesn’t actually served Chinese cocktails. At least not usually. Because to celebrate the Lunar New Years, they’re creating a special, one-off, all-Chinese cocktail menu.

Eat into a year of prosperity at Speedboat Bar 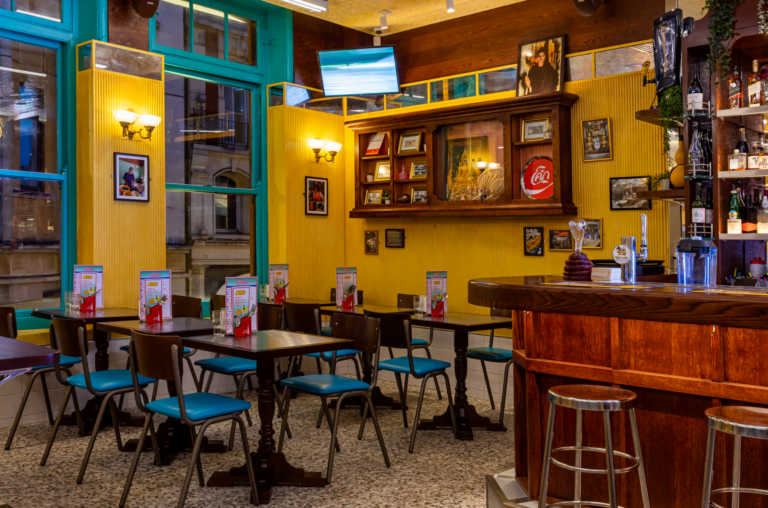 Frankly, we’re already quite lucky to have Speedboat Bar right here in our own Chinatown, so they’re really gilding the lily by throwing on a Lunar New Year menu specifically designed to give you good fortune. You’ll get Yee Sang Salad, (aka ‘Prosperity Toss’) featuring bream & jellyfish sashimi; some egg noodles with red roast pork and prawn wontons; and finally some Chinese-style roasted suckling pig belly with sweet dark soy. Not so lucky for the pig, very good news for you. 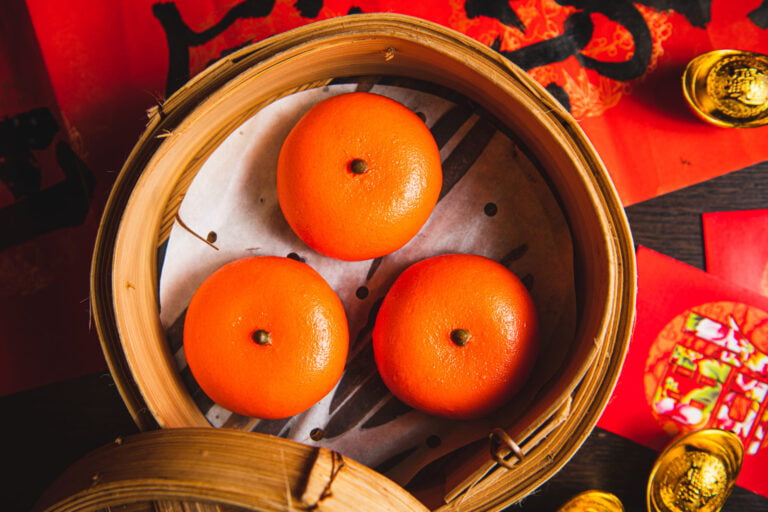 Citrus fruits carry a lot of symbolic value at the Lunar New Year, and they literally get called ‘good fortune fruit’. But custard buns taste better. So Plum Valley have squared the circle, and created beautiful little custard buns that look just like tangerines. Genius. Chef & founder of Bun House (below Wun’s Team Room), Z He, must surely be one of the best bakers in the city. Her Lunar New Years buns are looking like little masterpieces that almost seem a shame to eat. Almost. You’ll find three new treats on the menu: First, the velvety “Faat Choi” Bun of Fortune, with a black sesame lava center. The there’s the “Dai Gut” Bun of Luck, filled with a rich dark chocolate & tangy mandarin filling. And finally, there’s the “Lunar Bunny” bun, adorned with whimsical bunny ears and a fluffy white tail, and filled with White Rabbit Candy Creams (a nostalgic Cantonese sweet shop classic).

Just want to do something simple? Here are the best Chinese restaurants in London