Go On A Mews Crawl Through West London

These cobbled courtyards, with their wisteria-laden balconies and vintage bicycles perched nonchalantly against pastel walls are a mainstay of insta feeds – though, mysteriously, the owners shouting at people to get off their doorsteps never seem to feature.

Here’s the history: mews were once home to the stables tacked onto the enormous houses of West London. Mostly built around the 1860s, they had stables on the ground floors, with a few rooms upstairs for the stable boys or cart drivers to live in. And most importantly, the big houses were built back to back, so that the stables could be built along a courtyard and the smell of the horses kept away. Once cars became a thing, and big houses started to be broken up into flats, the mews houses were gradually converted into proper houses. Nowadays, they’re some of the priciest property on the market and have become a quintessentially British scene.

Whether you’re documenting the trip or not, these hidden backstreets make for a picturesque stroll around West London. So we’ve put together a (fairly) reasonable walking route to tick off the most scenic mews in Notting Hill, Holland Park and Knightsbridge. All you need is shoes. People flock to St. Luke’s Mews to take a peek at the baby pink cottage used as Keira Knightley’s house in Love, Actually. If you ask the owners nicely – say, by standing outside in the snow with placards as a big gesture – or just make a charity donation, they’ll let you take a snap. The rest of the mews courtyard is equally picturesque, with houses sporting the full Farrow & Ball catalogue of muted greys and blues.

If you’re feeling peckish or thirsty at this point, take a left after the pink house onto All Saints Road, and knock on the yellow door opposite The Jacksons. If not, start your five minute stroll towards… 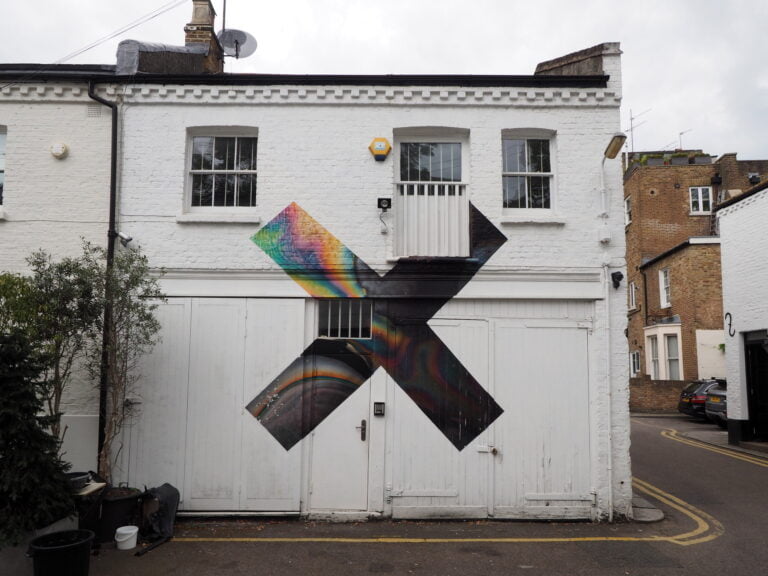 Absolutely tiny, but worth a look for the house on the corner. Home to independent record label XL, it sports a blown-up X from The xx’s Coexist album on one side, and a sprawling mural from Thom Yorke’s The Eraser on the other. Adele, M.I.A., SBTRKT and The White Stripes have all recorded here – but with an average release of six albums a year, it’s probably not worth hanging around outside. Instead, head back along the rest of Blenheim Crescent, swing a left, and take a quick peek down Elgin Crescent and Colville Terrace – two pastel-coloured streets that look like they were carved out of ice cream – before heading down… 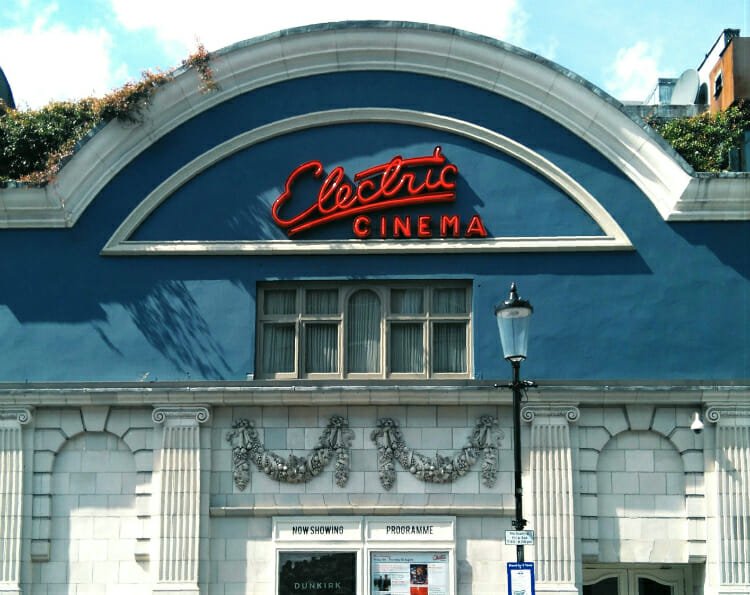 To your right – the Electric Cinema, one of the oldest purpose-built picturehouses in the city, now lovingly restored by the people behind Soho House who have filled it with cocktails, cashmere blankets and red velvet daybeds for two. To your left – the sprawling Portobello Road market, with hundreds of stalls hawking antique bric-a-brac and cameras that don’t work anymore. Dotted along the road are plenty of spots for pit-breaks – Trailer Happiness for cocktails, Gold for grilled grub, and Farm Girl for blue lattes – before you reach the end, where you’ll be rewarded with another stretch of pastel-slathered houses. At the roundabout, turn back onto Ladbroke Road to head onto…

Another picture perfect mews, lined with 150 year old stables. At the end of the 19th century, number 8 was home to a fireman, his wife, and their eight children. Cosy. The obvious odd one out was done up in the 1930s by Dr Disney Cran and his wife Peggie Cochrane, who promptly took a lover there (a Fred Astaire-type who danced on the BBC) and used to greet every morning standing naked on the balcony. 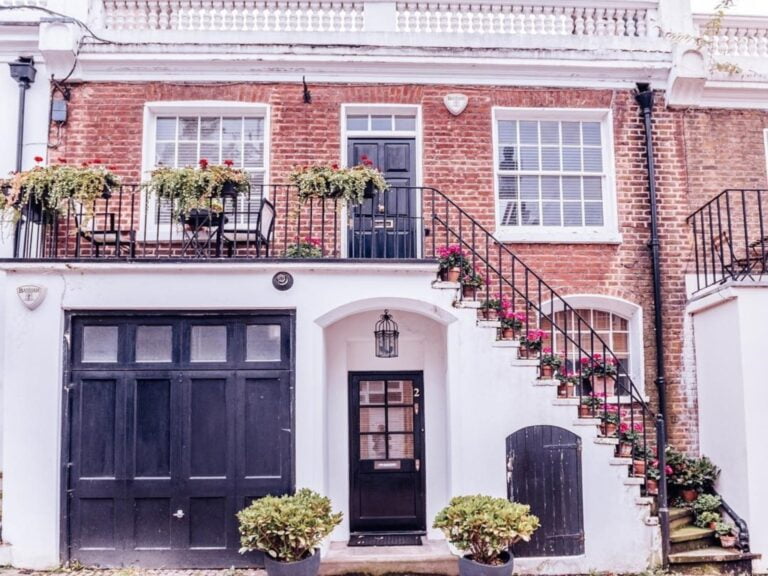 Holland Park Mews is so fancy, even the archway at the end is Grade II listed. The mews houses here are a cut above, with winding staircases to first floor balconies and Victorian street lamps. Rest assured that once you have £3.5 million saved up, you’ll be able to snap one up.

Now, take a leisurely stroll through Holland Park, spot the peacocks at the Kyoto Garden, stop off for a light lunch at Dishoom Kensington, and weave through Kensington’s back streets for a bonus visit to… 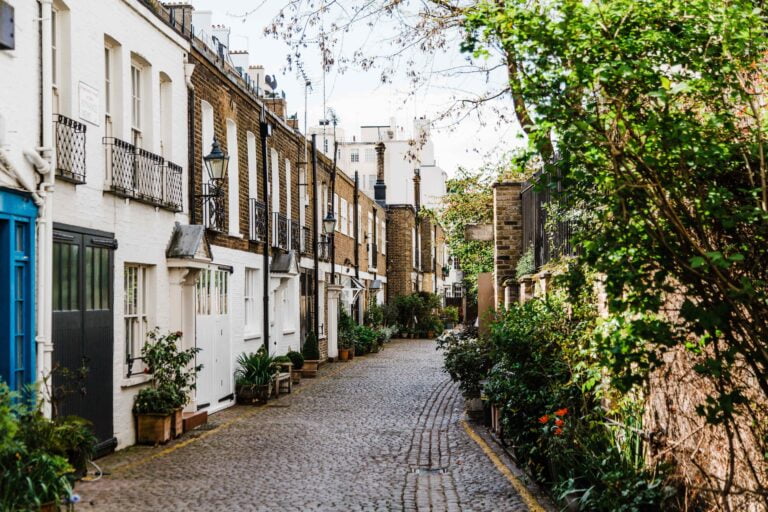 The crowning glory of London’s mews: with trailing fronds of wisteria, tiny balconies, ivy-clad walls and roses climbing round doorframes, Kynance Mews feels like a quintessential English country lane… in London. It’s so beautiful, it’s been a World Heritage Site since 1973, putting it on a par with Westminster Abbey, and Liverpool. Once you’ve drunk in the rustic splendour, continue along Elvaston Place and leafy Imperial College Road, then head in between the two college buildings in front of you. Make your way along Prince’s Gate Mews to reach our final stop… 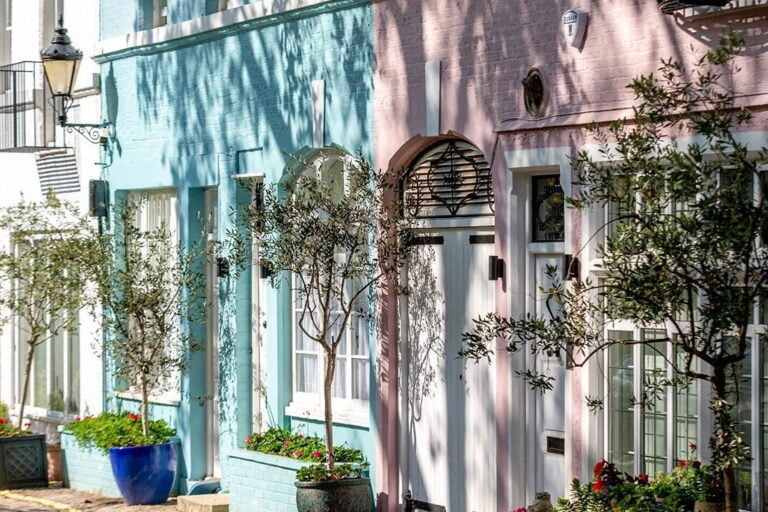 Chances are, if you’ve got this far then Ennismore Gardens Mews will be right up your street. It ticks all the boxes – pastel-hued houses, cobblestones, window boxes, wrought iron balconies, and a studio flat currently on sale for £1.25m that’s the size of a tube carriage.

Better save your pennies for a post-walk slap-up meal at Hawksmoor round the corner.

Want to explore more of London? Check out more of The Nudge’s curated Itineraries