Two facts to mull over on St. Patrick’s Day:

1) St. Patrick was British
2) His official colour is blue

Yes, we’re fun at parties. And speaking of parties, there are several going on this month (along with feasts on the river, whiskey tastings, live music, parades and more) to commemorate the man who drove the snakes out of Ireland. And these are the best…
– 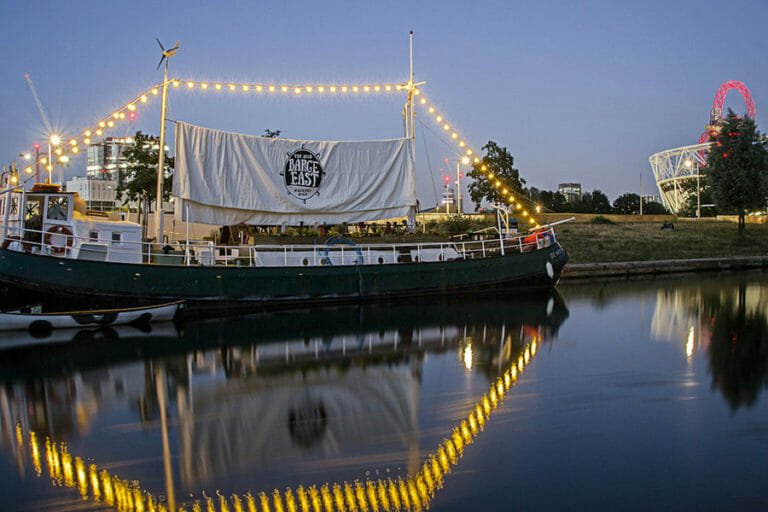 Barge East are floating the idea of St. Paddy’s Day on the river – they’ll be kicking things off with a Baby Guinness and some Irish poetry readings, before laying on an excellent four-course feast accompanied by raucous live music. 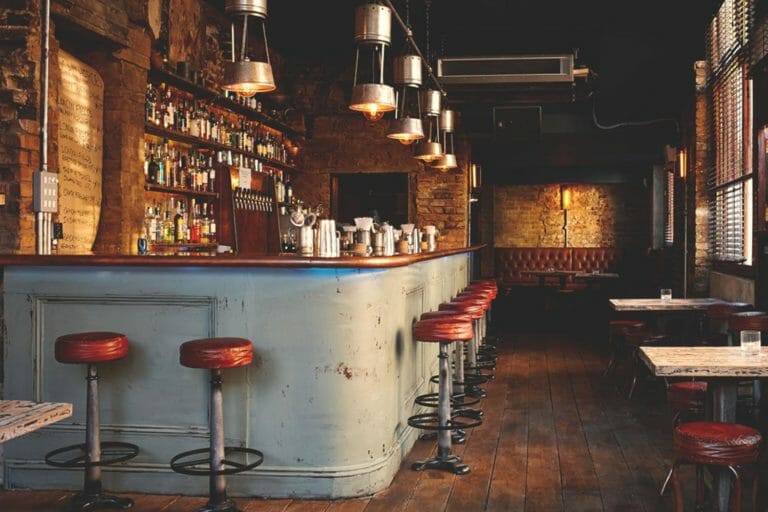 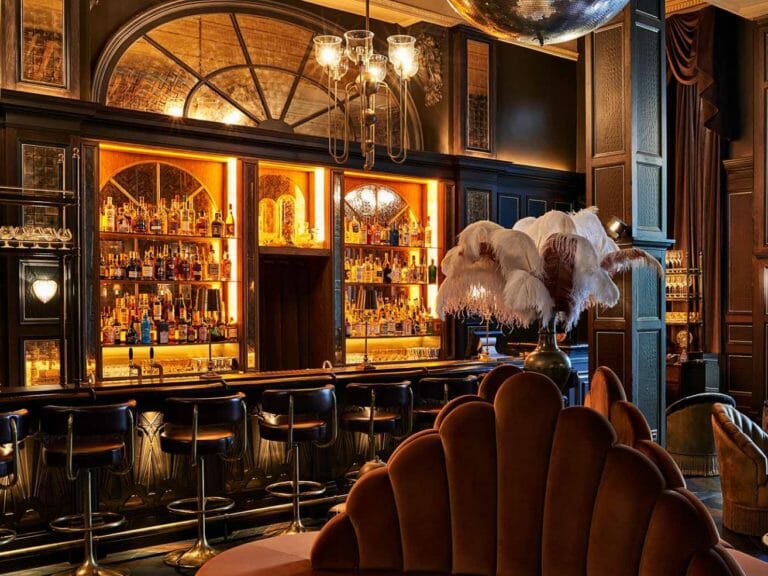 Bar 1661 is, almost without question, Dublin’s best new cocktail bar. After opening last summer it’s already snapped up awards for Best Cocktail Bar in Ireland & Best Bar Team in Ireland. It specialises in poitín (a traditional Irish spirit that was banned in 1661, and only unbanned in 1997) which it throws into virtually every cocktail it can. The Dublin Coffee is loaded with it, and apparently outsells Guinness at the bar. Anyway, the point of all of this is that it’s popping up in London’s own Fitz’s Bar for one night on St Pats… 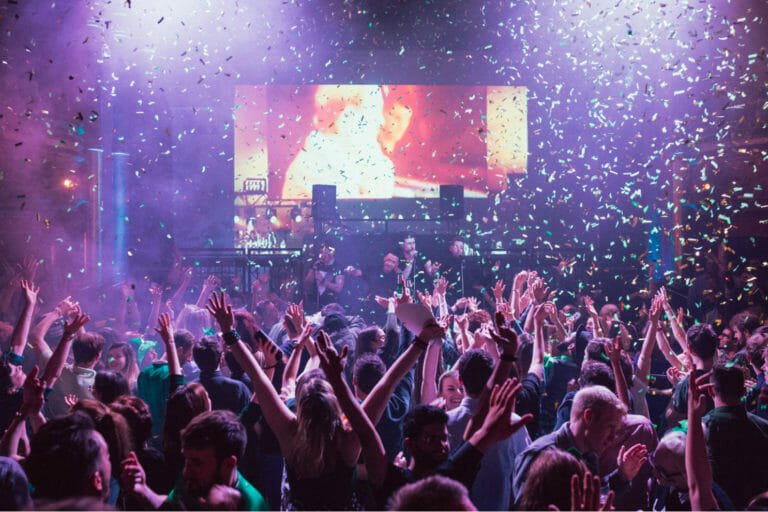 The Clapham Grand is promising an “unparalleled merry atmosphere” for their St. Paddy’s shenanigans – and with ‘giant’ leprechauns; green confetti cannons; Guinness on tap; Irish pop classics; traditional live bands; photobooths; face painters and an Irish dance troupe on hand… they might just live up to it. 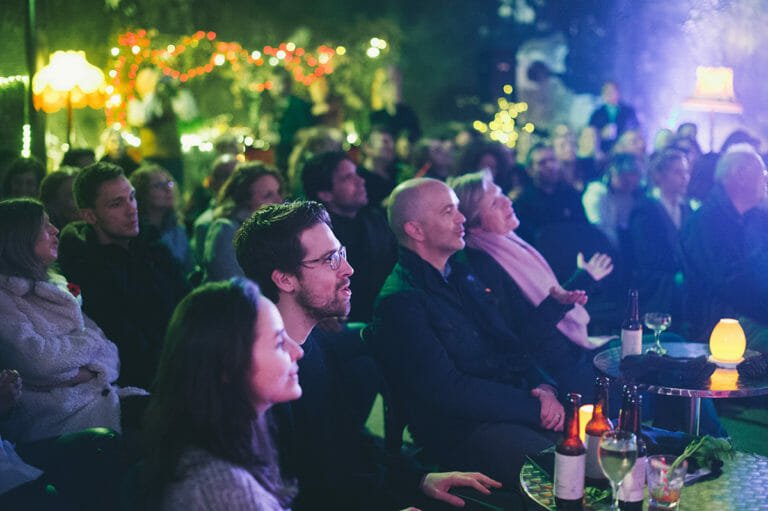 No St. Patrick’s Day tour would be complete without a couple of Irish whiskey hot toddies. And here they’re served in a candlelit garden on a roof, filled with open fire pits. Plus, they’ll be accompanied by a live, stomping, fast-paced Irish hot jazz and blues band and a traditional singalong in the underground tunnel shaft below. Anyone not going will be green with envy. 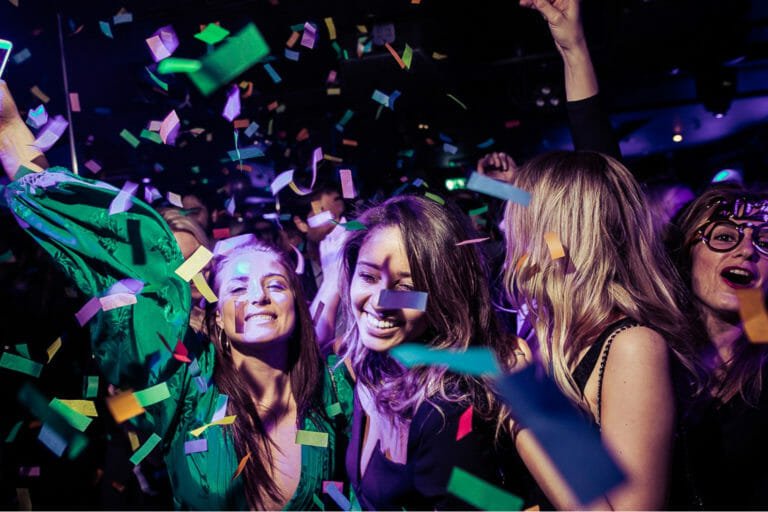 The Piano Works, but the house bands will be dusting off their fiddles for a night of non-stop Irish pop music requests. And while you bop along to Boyzone, The Corrs and B*Witched, you can take advantage of the roaming green glitter artists, ‘special Irish shots’ and £3 Guinness. 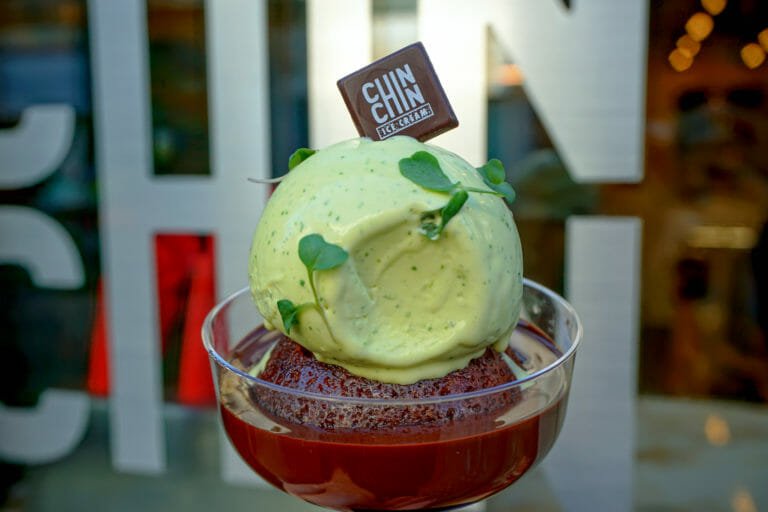 Camden Market’s festivities will be an all-day affair, with a free trail of live acoustic Irish musicians to follow, totalling six different acts around the market. To go with them, there’ll be specials from the food vendors, including Chin Chin Labs’ ‘four leaf clover’ ice cream (perched on top of a chocolate potato cake with stout sauce), and a pop up potato spirit bar. 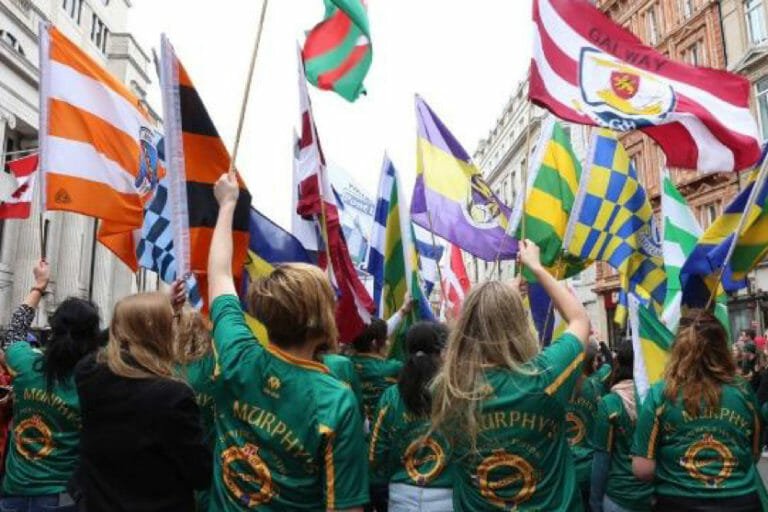 Now in its 18th year, the official St. Patrick’s Day London celebration that takes place in Trafalgar Square regularly pulls in 125k punters – and it’s no surprise when you consider that they have Irish marching band parades, a giant St. Patrick, storytelling and live music (MC’d by Derry Girls actor Siobhan McSweeney), a street food market, a replica Irish cottage, a film fest screened across London, and a ton more.

Murder On The Barts Floor 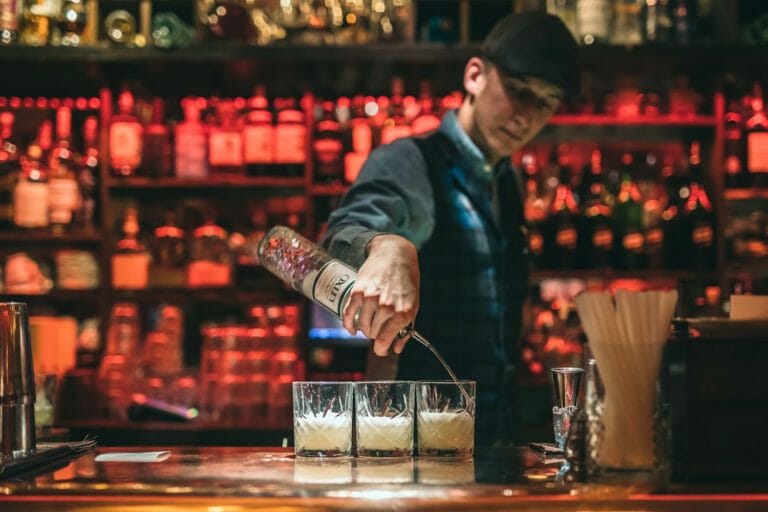 Chelsea’s speakeasy is staging a St. Paddy’s special of its murder mystery night – in which you’ll have to cross-examine the motley crew of lawless reprobates under suspicion and clear the name of Irish gang leader Dean O’Banion. All while drinking copious amounts of cocktails, of course. 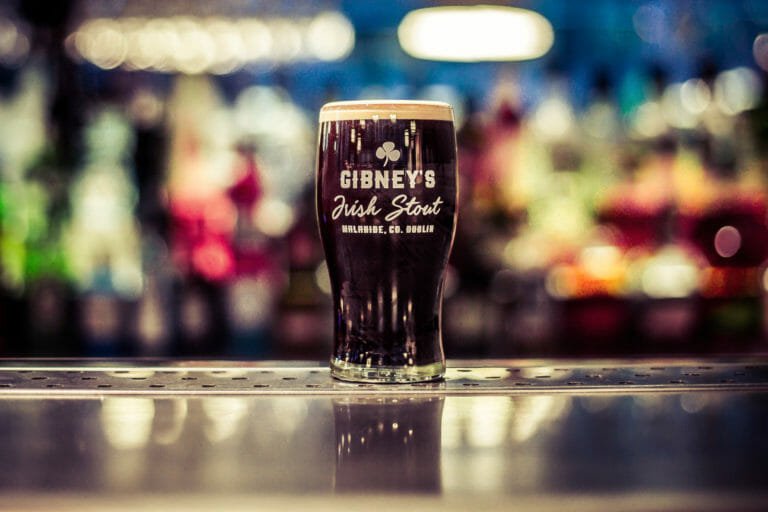 As the finest Irish restaurant in the city, the recently opened (and critically acclaimed) Daffodil Mulligan is already a safe bet for a St. Paddy’s supper. But on top of that, a new bar team is taking over the basement drinking den just in time for St. Patrick’s Day: Gibney’s of Malahide. The Dublin original has been going strong for 80 years, and this’ll be its first outpost abroad. You can expect live music, 120+ Irish whiskies, special cocktails, bar snacks from upstairs, and Gibney’s Stout on draft; the only place you’ll find it outside of Ireland. 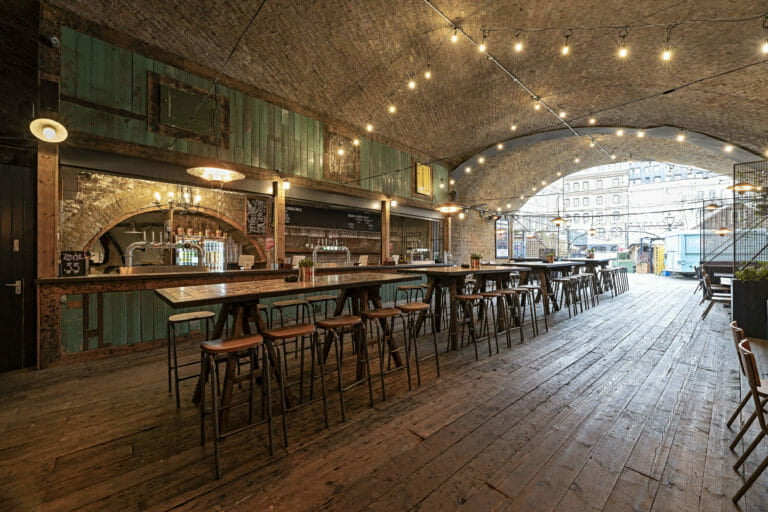 Flat Iron Square are doing what they do best – top notch street food in a covered winter garden – but adding a little sprinkling of Irish charm to proceedings by way of an Irish band, jigs, and Guinness on tap. 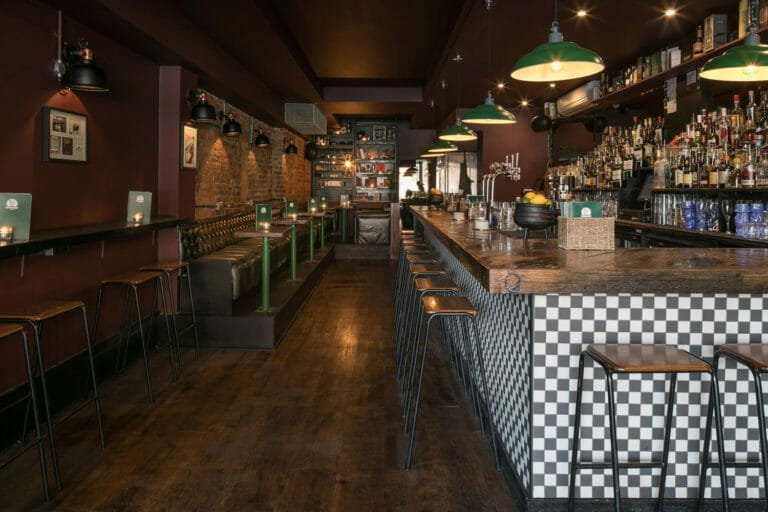 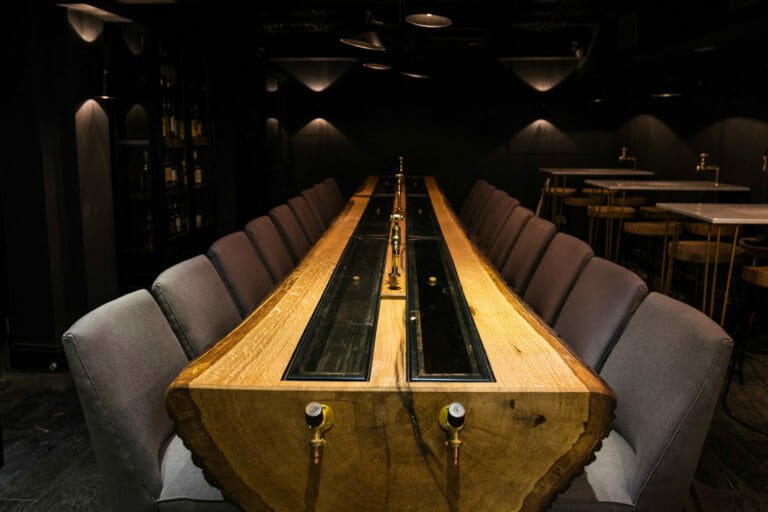 As one of London’s eminent whisky bars, Black Rock were never going to pass up an opportunity to celebrate. On the weekend before St. Patrick’s Day, they’ll be hosting Roe & Co Whiskey, who’ll be stationing their ‘dram tram’ wagon out the front, serving special whiskey cocktails downstairs, and holding a live Irish music session in the ground floor tavern (Friday 8-9pm). Then on the big day itself, whiskey ambassador Claire Best will be making the trip from Ireland’s Midleton Distillery to guide you through a tasting masterclass with five different drams. 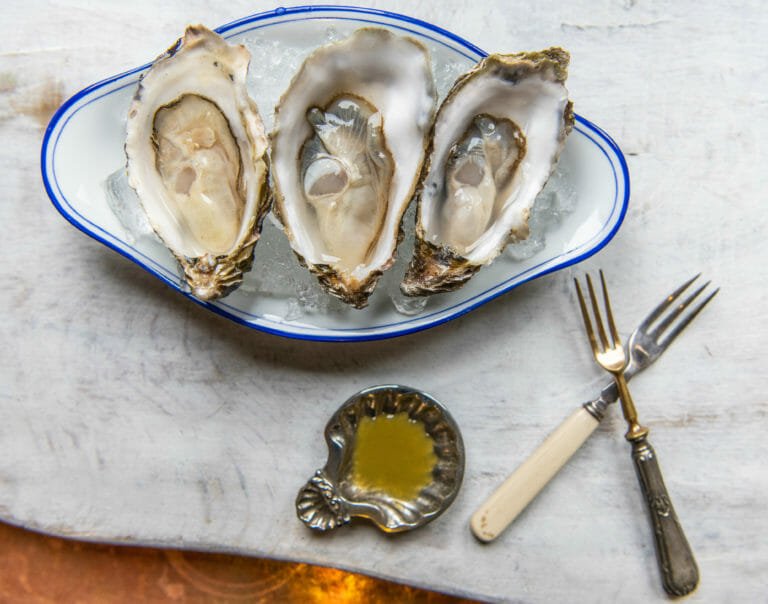 Predictably, The Grand Duchess is celebrating St. Paddy’s in style. The floating restaurant will be serving an Irish inspired menu (Guinness & oyster pie, oak roast salmon with whiskey cream, and the like) and offering a platter of a half dozen oysters to anyone who can prove their Irish nationality. Tough luck, St. Patrick.

Want to continue the St. Patrick’s Day festivities? Then head to Daffodil Mulligan for dinner.