Just when you think the Blinders have hit their peak, something else comes along.

Six seasons on TV is wholly justified. Getting a Peaky Blinders immersive experience is expected. But getting a dance show? No fortune teller on earth saw this one coming.

The Redemption of Thomas Shelby is a collaboration between the show’s creator, Steven Knight, and Benoit Swan Pouffer, artistic director of Britain’s oldest dance company, Rambert. And it’s actually not as left-field a combination as it might at first sound. Remember that ballet scene in series five?* Pouffer choreographed that. And it turns out that Knight has long felt that dance can express things that can’t be captured on film.

After premiering in Birmingham (where else), The Redemption of Thomas Shelby is now on stage at the Troubadour theatre in Wembley Park before setting off on tour around the rest of the UK next year. And while it’s not perfect, it’s well worth a watch. The plot roughly traces the first two series of the show, as Moi Tran’s versatile, minimalist set shifts from subterranean tunnels in WWI to cabaret bar, racing ground and opium den. Across an action-packed first half, and a slightly rarefied second, you’ll see Grace and Tommy fall in love, the gang’s rising fortunes, death, depression, and, ultimately, the ‘redemption’ of Thomas Shelby.

The dance is exceptional. The twenty-strong company ripple across the stage in impressive group numbers, from the controlled acrobalance of the opium scene, with its impressive smoke effects, to the energetic folk dance of the gypsy camp and the tight back and forth of the fight sequences, knives flashing. But it’s the smaller numbers that will make you catch your breath – Tommy (a prowling Guillaume Quéau) and Grace (the commanding Naya Lovell) have fantastic chemistry, though their time together feels short. Musa Motha, a new Rambert company member and amputee dancer, performs an incredible duet with Quéau that perfectly encapsulates Knight’s thoughts on the unique power of dance. 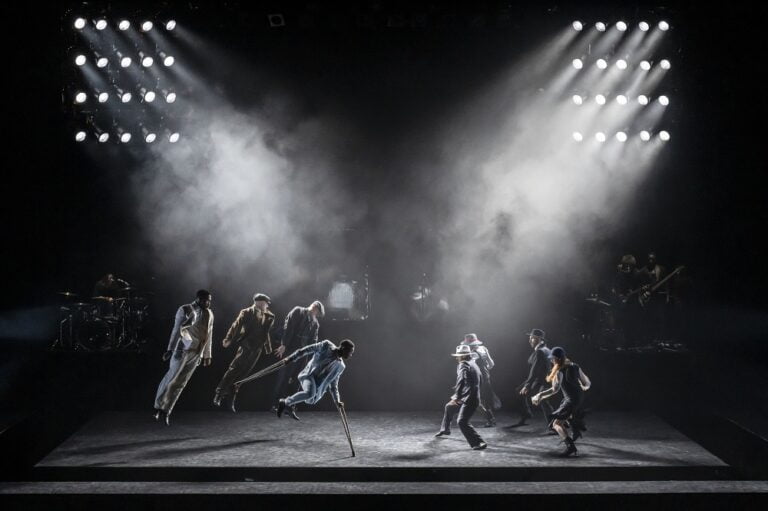 The whole show’s soundtracked by a mix of new compositions and iconic Peaky Blinders tracks, all performed by a live band at the back of the stage who switch seamlessly between cello and electric guitar (and yes, there is a banging rendition of Nick Cave’s Red Right Hand). Grace makes her entrance to a brand new song by Laura Mvula, written especially for the show, and the scenes are punctuated by snippets of poetic exposition by Benjamin Zephaniah, who played Jeremiah in the show.

All in all, it’s a fairly breathtaking bit of spectacle. There are moments where the pacing is allowed to drag a little, but plenty more that’ll have you sitting, slack-jawed, as you take in the impressive physical ability of the cast. And to condense 12 hours of television that flits between cities and time periods, well…

…caps off to them.

NOTE: Peaky Blinders: The Redemption of Thomas Shelby runs until November 6th in the Troubadour Theatre in Wembley. You can find out more, and get your tickets right HERE.

Like live performance? Check out the best London theatre shows on now