A Night of Live Music by the River

The Nest Collective have already announced their line-up of al fresco summer gigs with some of the city’s most talented folk musicians taking to the stage.

But this particular one features an unexpected special guest…

Having spent their winter holidays in West Africa, these birds fly over to the UK in Spring, when the males nestle into trees and hedgerows and begin singing to attract a mate. Pretty much universally revered as one of nature’s most enchanting sounds, this nocturnal birdsong has inspired poetry, music and folklore around the world. But various environmental changes mean that their population has dropped by an estimated 90%, and it’s now nowhere near as common a sound as it used to be.

That is, unless, you know where to listen.

To celebrate the return of the nightingales, the Nest Collective hosts an annual night of music under the stars, performed in tandem with the sound of the nightingales. This year, it’s taking place on 22nd April in one of the most secluded, atmospheric settings in the city. 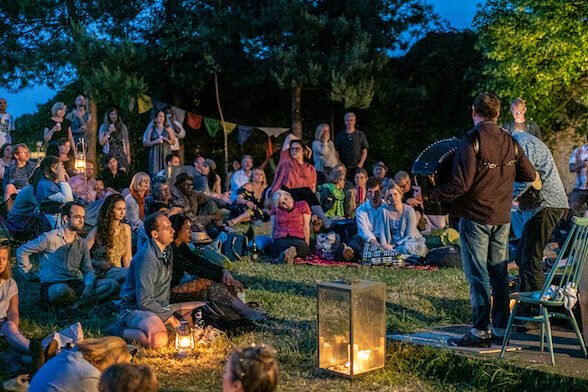 Set right by the river, the Master Shipwright’s house in Deptford is an old Georgian building with a beautifully leafy, festoon-lit garden. It’s here, amidst the trees and the fairy-lights, that the Nest Collective will invite Sam Lee and a host of guest musicians to duet with the nightingale’s chorus. Together, they’ll weave poetry, storytelling and music in tandem with the birds, creating a one-of-a-kind improvised piece that’ll never be repeated again.

The evening goes on until midnight, and if you want to make a night of it you could always head to Marcella beforehand for exceptionally good Italian.

You’ll be singing their praises, too.

NOTE: Singing with Nightingales takes place on 22nd April. Tickets cost £25, and you can book HERE.

Like going to laid-back gigs? Check out our guide to London bars with live music