The Coronet Theatre first opened its doors in 1898, became a cinema by 1923, and narrowly avoided demolition in the 1970s.

Now, after almost a century, it’s ready for its encore.

Finally back in action as a performing arts space, it’s in the capable hands of The Print Room, a theatre company originally based round the corner in Westbourne Grove. And despite all the conversions and modifications over the years, it’s still a stunning space inside, with the original gilded arches and balconies evoking a wistful sense of faded grandeur.

While the interiors are artfully crumbling, what’s happening on stage is cutting-edge. The Coronet is home to unusual performances, from new writing by contemporary playwrights to long-forgotten plays by the likes of T. S. Eliot and Pinter.

Besides theatre, the space plays host to avant-garde dance productions from big-name choreographers, genre-spanning festivals from international collectives, as well as talks, readings, and concerts. 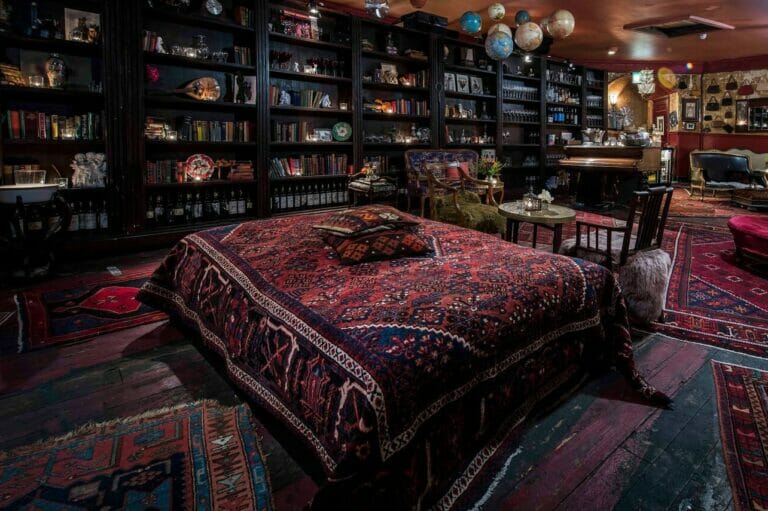 More intimate performances take place in the 90-seat studio, home to experimental performance and art installations, as well as in the theatre bar. Crammed with beaten-up Chesterfield sofas and chaises longues, Persian rugs strewn across the floorboards and a collection of small globes and other various bits of bric-a-brac suspended from the ceiling, it gives the impression of drinking in an eccentric geography teacher’s study. With a bar serving up wines, beers and spirits, it’s a decadent spot for a drink before (or instead of) a show.

Every month or so, it also becomes the stage for intimate poetry nights, with live readings, wine, and a little comedy. But verse fans should mark the Dead Poets Live events in their diary, too, when actors (who have previously included Tom Hiddleston, Denise Gough and Toby Jones) present staged readings of classic poetry, bringing to life the friendships, romance or rivalry between their authors.

NOTE: The Coronet Theatre is open Mon-Sat, 10am-6pm. The theatre bar opens one hour before every performance, and closes at 11pm. You can see what’s on at the theatre, or upcoming poetry nights, HERE.

Love theatre? Read our guide to the best London theatre shows on now…