Holding court on a busy Waterloo crossroads since 1818, it’s been known as the ‘Old’ Vic for almost as long. After 200 years, it’s now one of London’s most prominent theatres, home to everything from Shakespeare to musicals, and everything in between.

Currently under the artistic vision of Olivier award-winning director Matthew Warchus, the Old Vic stages seven or eight productions a year, ranging from kids shows with breathtaking puppetry to hard-hitting adaptations of classic plays. Their take on A Christmas Carol, lit with hundreds of tiny, sparkling lanterns, is fast becoming a London Christmas tradition, selling out for four years running. Right now, you can catch Paapa Essiedu (I May Destroy You) and Lennie James (Line of Duty) tackling Caryl Churchill’s fascinating two-hander, A Number. Together with a ‘Noises Off’ programme of talks and panel discussions, and a Lates programme staging comedy, cabaret and music after hours, it’s fair to say they put on a good show. 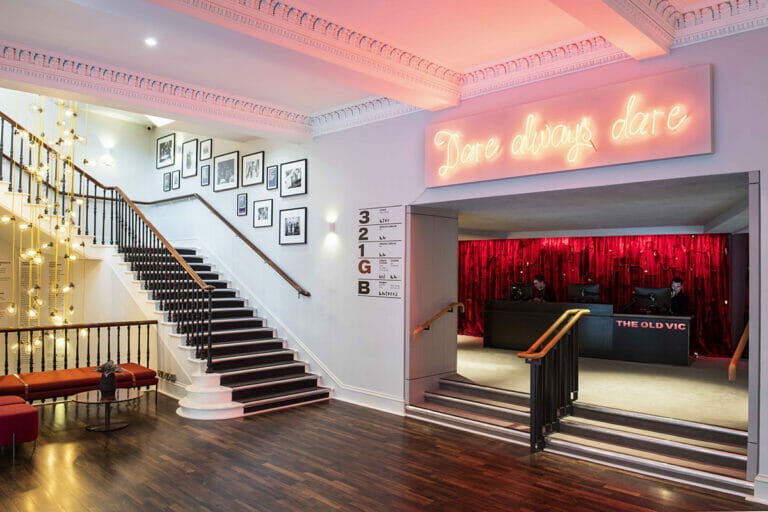 As you’d expect from such a venerable institution, there’s plenty of grandeur inside – the auditorium seats 1,000 people below gilded ceilings and a grand chandelier. But a recent refurb has knocked any stuffiness out of the building, with red neon signs announcing the shows, and hella suave bars on every floor.

Upstairs, the Circle Bar is open all day and is a good spot for a little freelance working (especially because you can clock off with a Champagne cocktail). Down in the basement, the Penny Bar – also accessible via a set of stairs coming down off the street – is a raucous after-show drinking den, with cocktails, craft brews, artisan spirits and a riotous soundtrack till the early hours.

NOTE: You can find out what’s on at the Old Vic, and book tickets, right HERE. It’s worth knowing that they have £10 tickets to previews (shows staged before the critics come in) – be the first to hear when they go on sale here.

Like theatre? Check out the best shows on in London now