Parked just down the street, it was established in 1970 as the theatre’s more casual offshoot. The hope was to make amazing performances more accessible to younger audiences – The Who used to stage free weekly concerts here – but these days, its stand-out reputation draws in punters of all ages.

It’s currently under the steerage of the multi-talented Kwame Kwei-Armah, an actor, playwright, director, and broadcaster who in 2005 became the second black Briton to have a play staged in the West End. Yep, 2005.

Under his steerage, the Young Vic’s staged some incredible shows – Death of A Salesman starring Wendell Pierce scored 5* reviews across the board; award-winning new play The Inheritance transferred to Broadway; while Kwei-Armah’s own production of Twelfth Night rejigged Shakespeare as an R&B musical with a chorus of Waterloo residents. But despite the high calibre of the shows here, tickets aren’t insanely expensive. There’s a £5 ticket lottery you can enter the week before a show starts, while the £10 Lucky Dip tickets are on sale for every show. They’re standing tickets, but if someone doesn’t turn up on the night, you can end up bagging their front row seat for yourself. 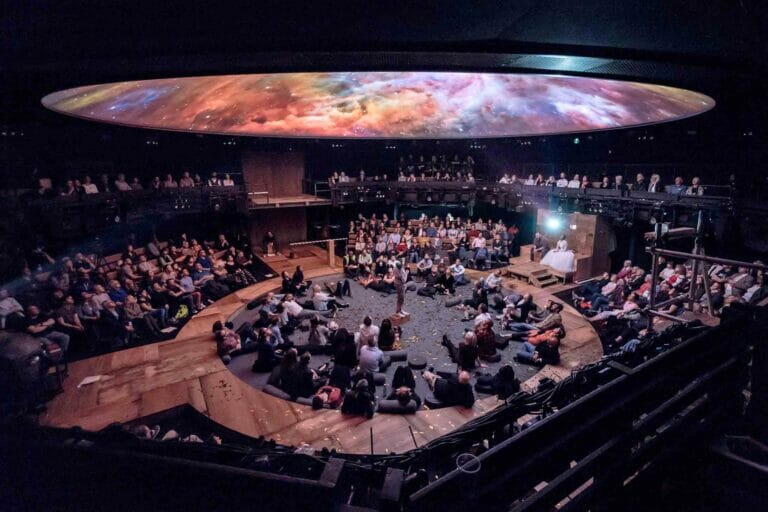 The theatre itself is more snug than its cousin, seating around 550 – but with the ‘most flexible auditorium in London’, those seats aren’t arranged in your typical theatre-y way. Seeing a show at the Young Vic means that you’ll usually be pretty close to the actors – maybe even on stage with them, with unconventional set design putting you right in the action.

Aside from the auditorium, there’s the box office – set in the remains of an old butchers’ shop – and a two-storey café-bar, where you can work by day, or grab a post-show drink.

After all, the night’s still young.

NOTE: You can find out what’s on at The Young Vic, and book tickets, right HERE.