If you fancy significantly increasing your silver lining-to-cloud ratio, then we might have just the thing.

Because London happens to have a long list of independently run food producers & suppliers who are delivering their fresh & supremely well-crafted goods direct to your doorstep (literally, in the case of no-contact drop offs) during the lockdown.

And the best bit? Once you’ve gotten to know them, you can continue to get the benefit of their delicious trade once everything goes back to normal, too… 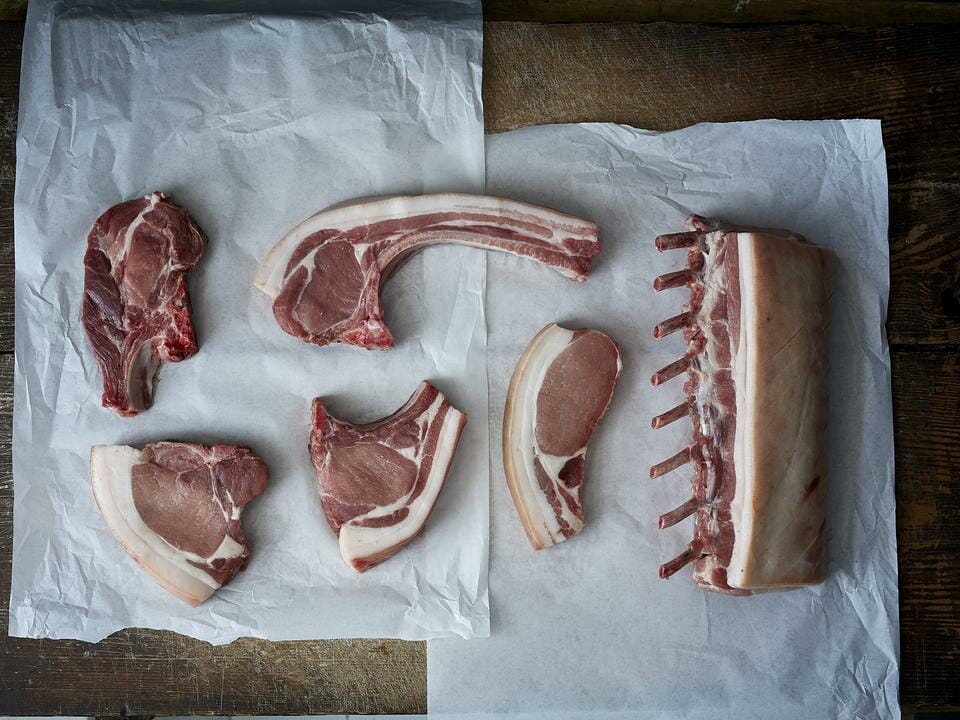 The Ginger Pig started life as a farm in North Yorkshire, before deciding to sell those animals for parts in London, and well as supplying a list of fist-class restaurants that would turn other butchers crimson with envy. You can get beef, pork, and lamb delivered, as well as a hearty pie if you catch them on the right day. 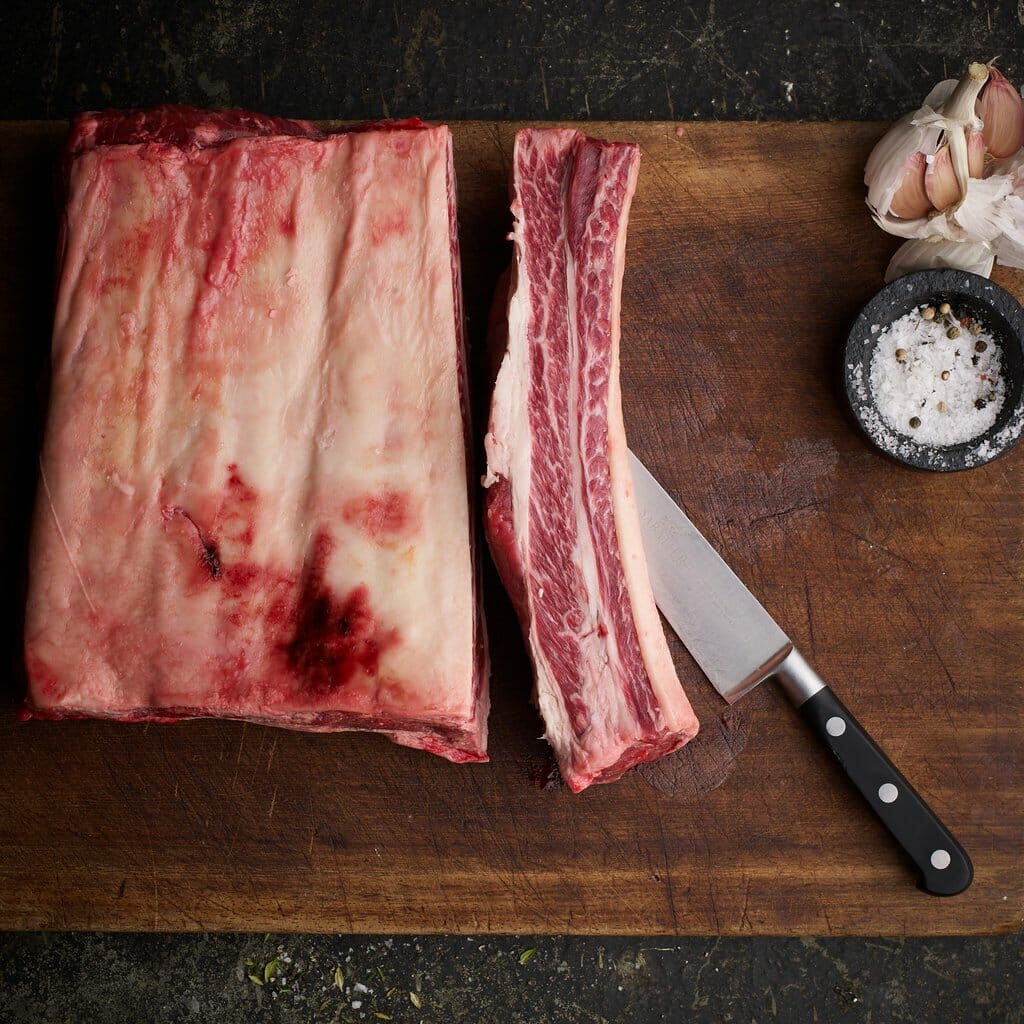 What makes a butcher ethical? Well, according to the Ethical Butchers, quite a lot of things. They focus is on reducing their climactic impact to net zero (or better), and working with farmers who practice ‘regenerative agriculture’, that increases the bio-diversity of the land they work. And the London shop will send you a wealth of beef, lamb, pork, chicken, and game. They even have curated boxes filled with a mix of cuts. 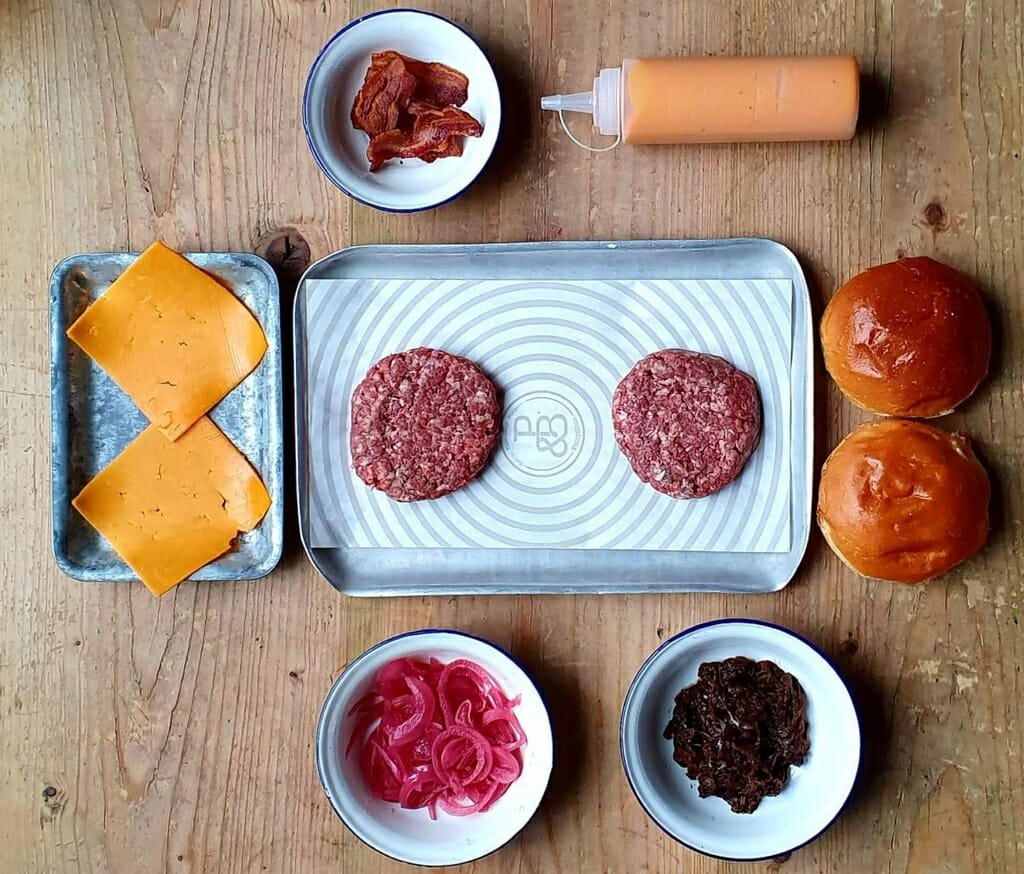 HG Walter have been in the business since the ’70s, and they’ve been happily changing everything that needs changing (adding a website, for instance) while leaving everything else comfortably alone (the recipe for their insanely good sausages, for instance). It’s no surprise that they supply the River Cafe. And the isolation kicker? They’ll sell you a ‘Lockdown Patty Kit’ to make your own Ari Gold cheeseburger from Patty & Bun. 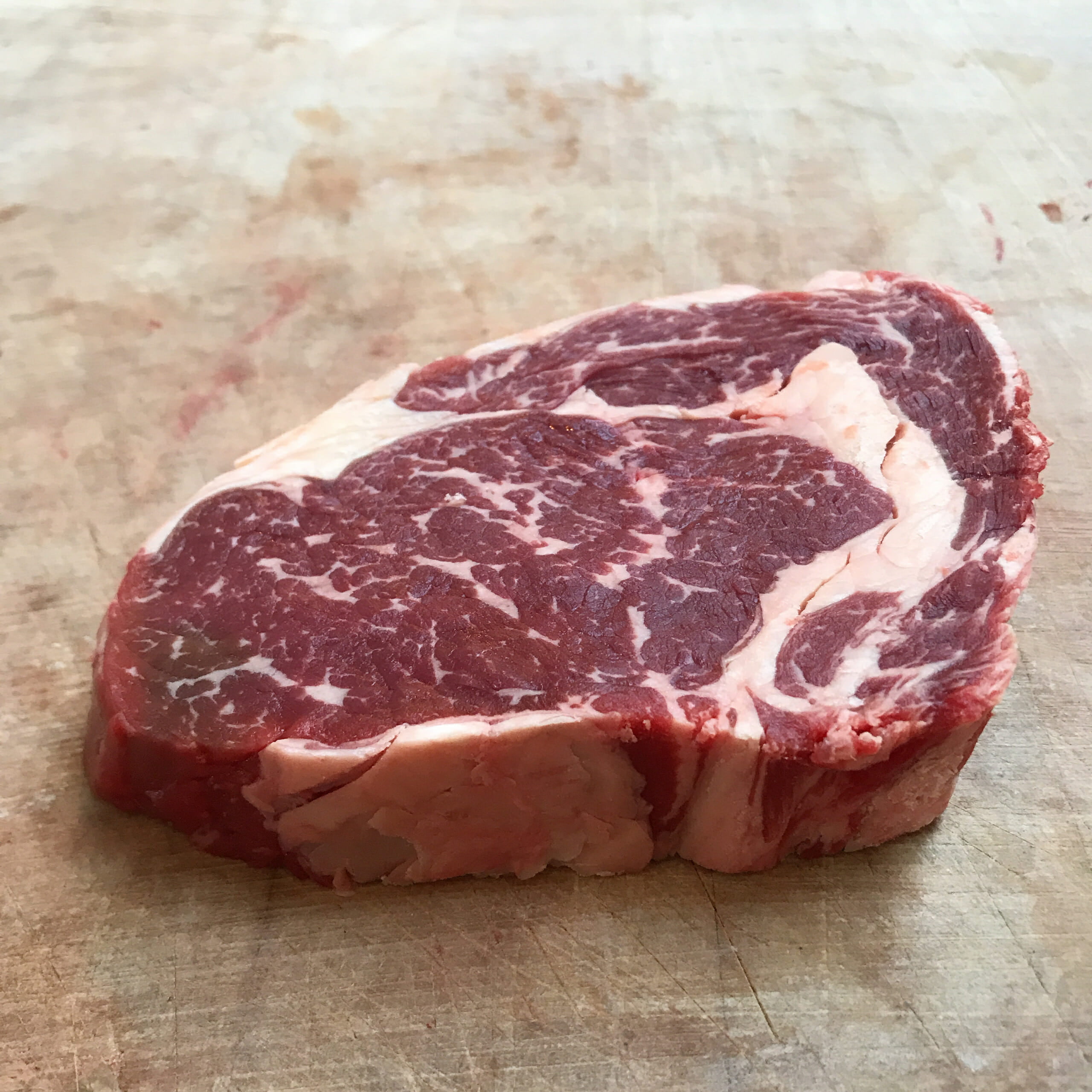 Delivering to predominately SE & E postcodes, the Butchery are specialising in self-isolating home delivery kits. You can expect all the regular butcher goodness, plus extra necessities like honey, eggs, and jalapeño jam. 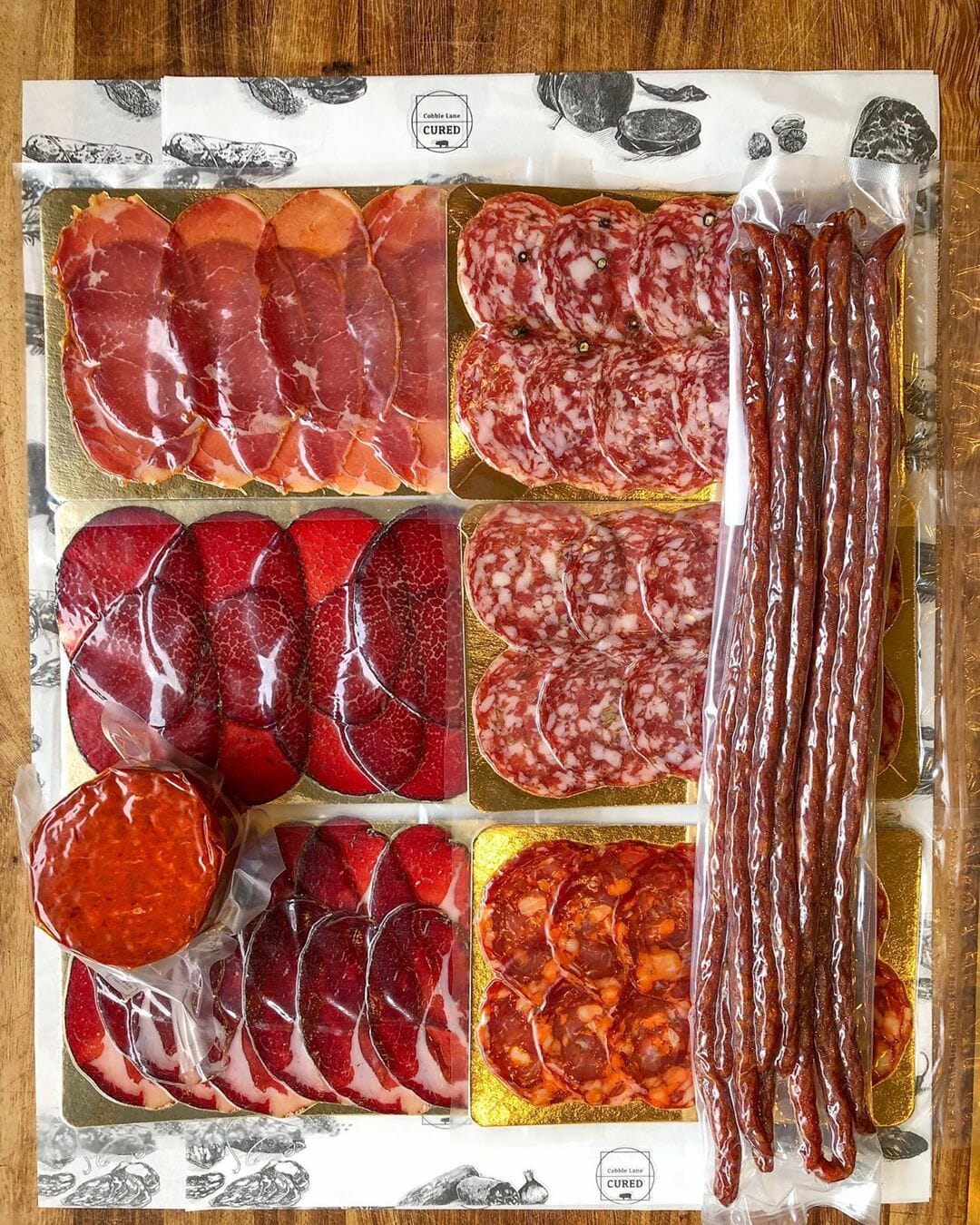 You’ll find Cobble Lane on Cobble Lane up in Islington, and it’s there that they cut, cure, smoke and hang meats to produce their top-shelf British charcuterie. Head to their online shop for bresaola, coppa, lomo, pancetta, fennel salami, and more. 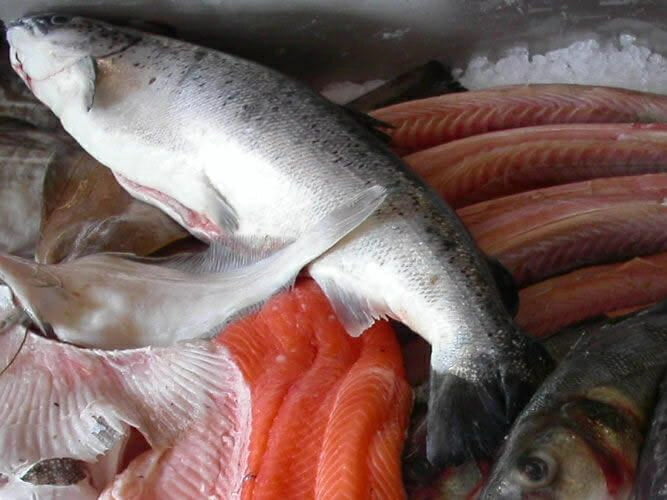 Ben’s fish was founded by a fisherman named Ben. And after selling his day-boat swimmers to London’s top restaurants, he cannily decided to start selling them to everyone else, too. Now he has his own fishmongers in the Thames Estuary, and delivers all over London. He must be quite a catch. 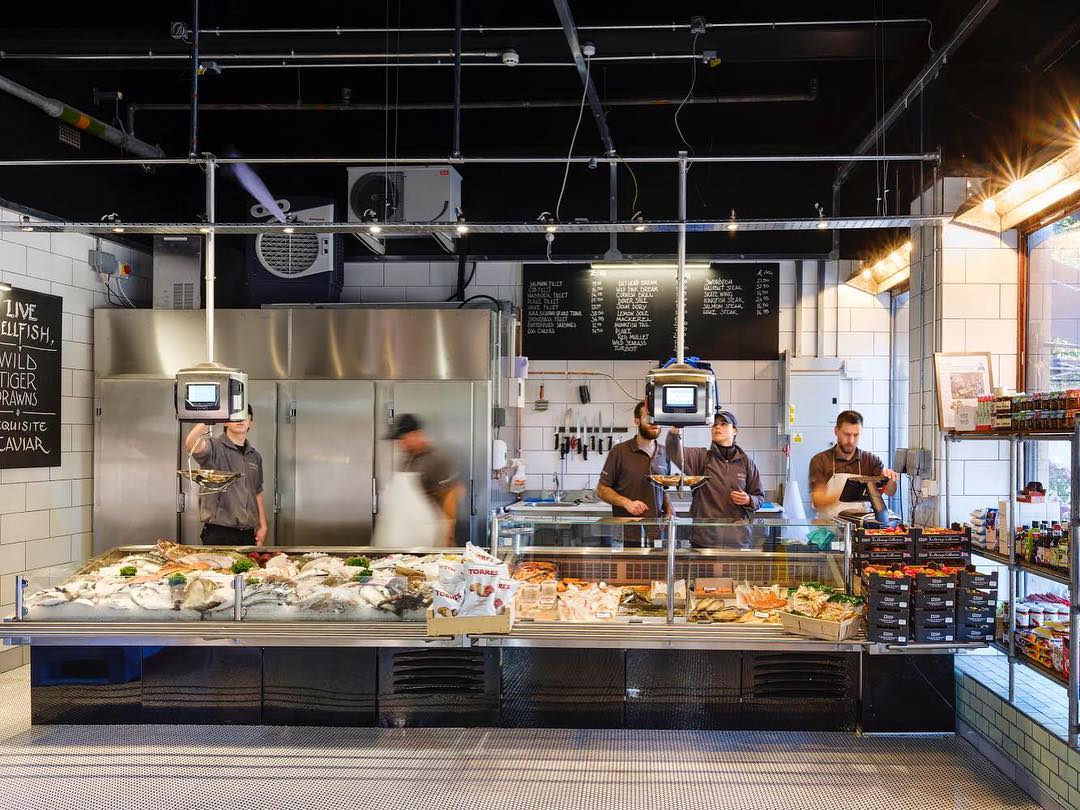 What started with selling fish out of a Citroën van soon became a string of four elegant fishmongers across the capital selling fish from across the British isles… which they all then started delivering to Londoners in need, and effectively ending up back where they started. With a better van. 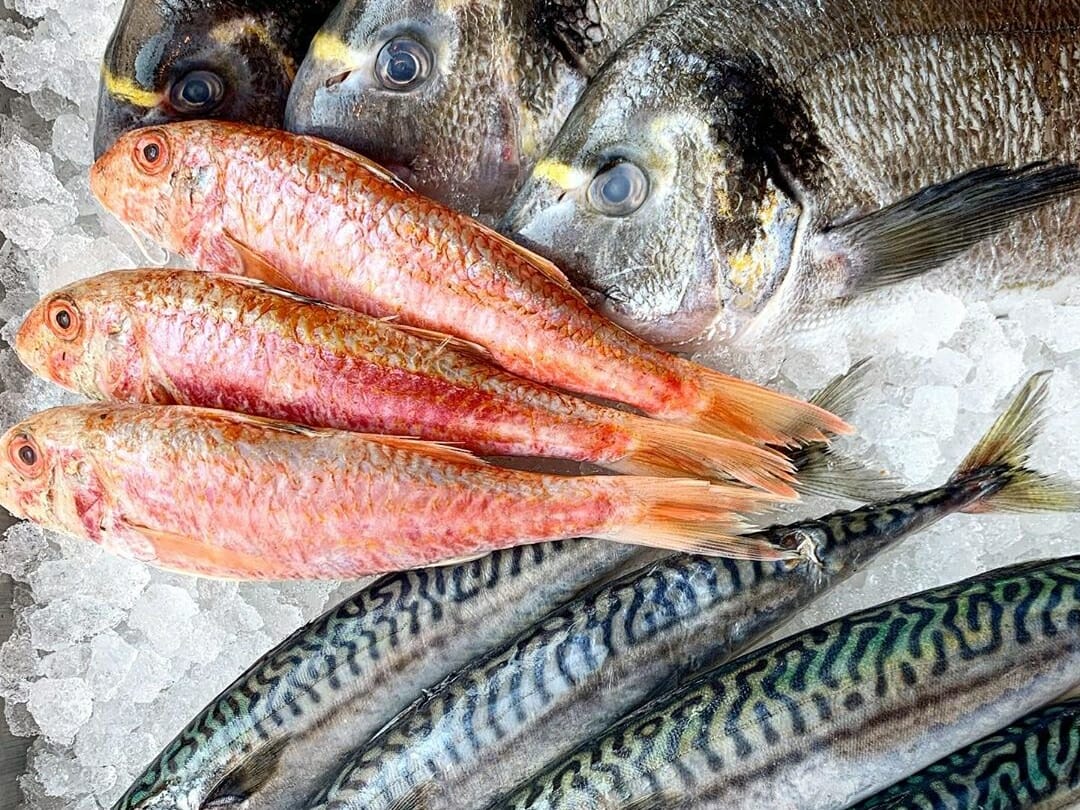 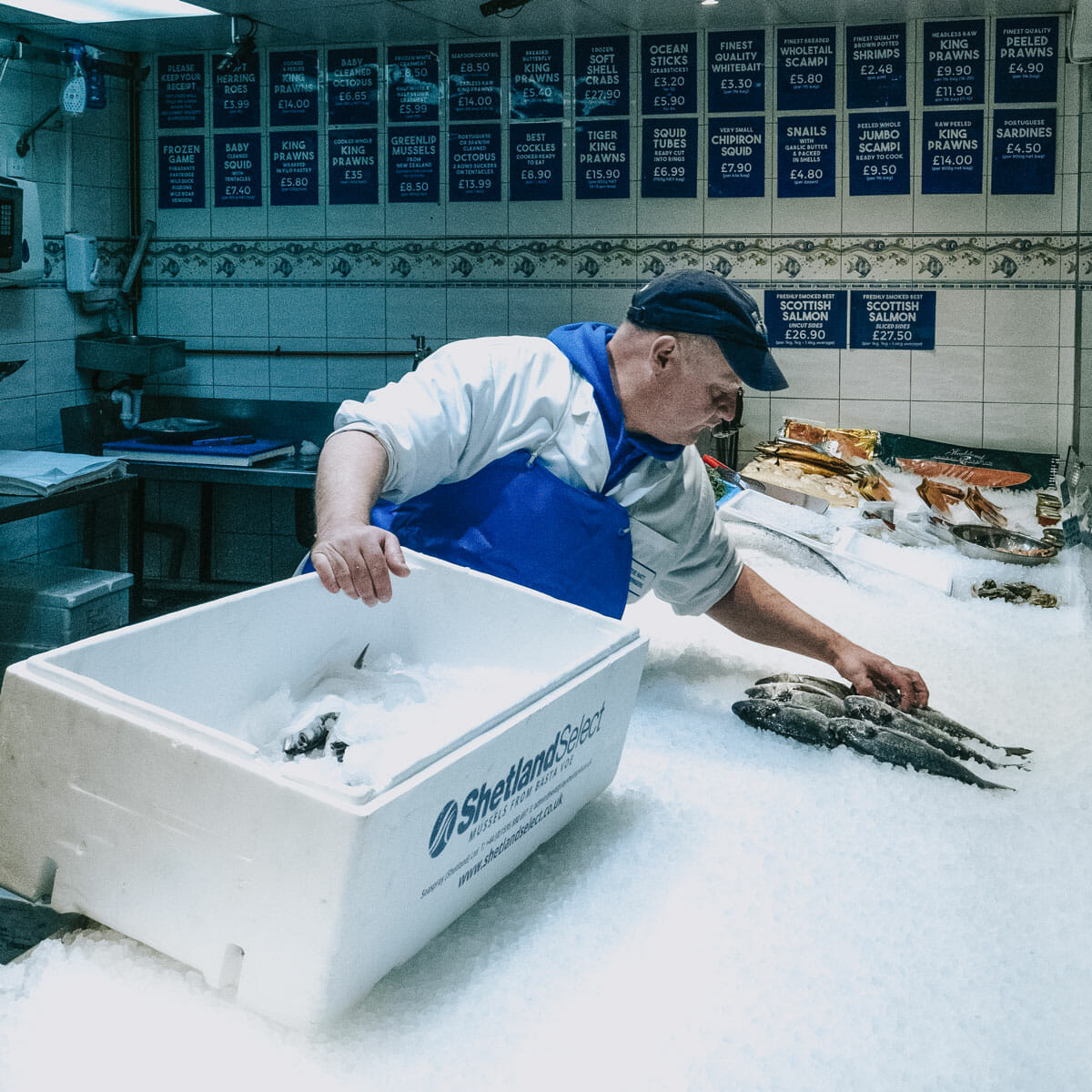 Delivering to north & east postcodes, Steve Hatt is an Islington based fish-flogger that champions sustainable fishing methods, and aims to create the “smallest ecological footprint as possible”. Everything comes off dayboats, and they’ll deliver the next day to keep it as fresh as possible.

Based out in Hackney, the F&F use only line-caught fish from the British isles (and, in the case of their tuna, slightly further afield). And they also have their own oyster bar. 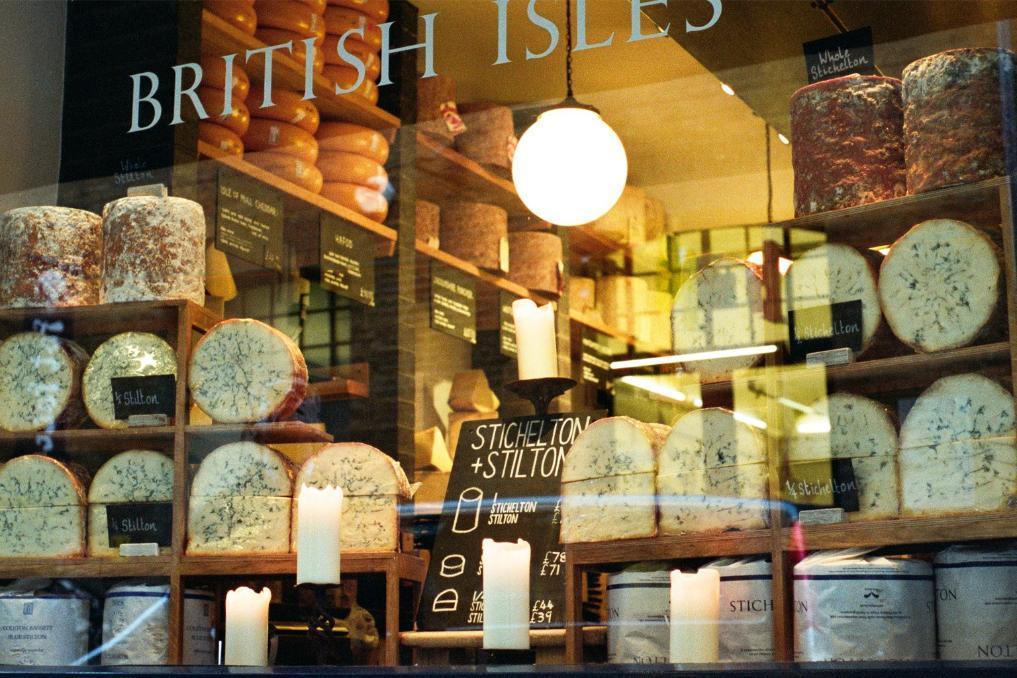 Neal’s Yard cheese has, at this point, moved away from being simply a little gem that everyone thought that only they knew about, to being a bona fide legend. You can get some of the best cheeses this nation has to offer delivered to your doorstep, as well as a (limited) run of dairy boxes packed with staples like bread, milk, eggs, butter, yoghurt, and – yes – cheese. 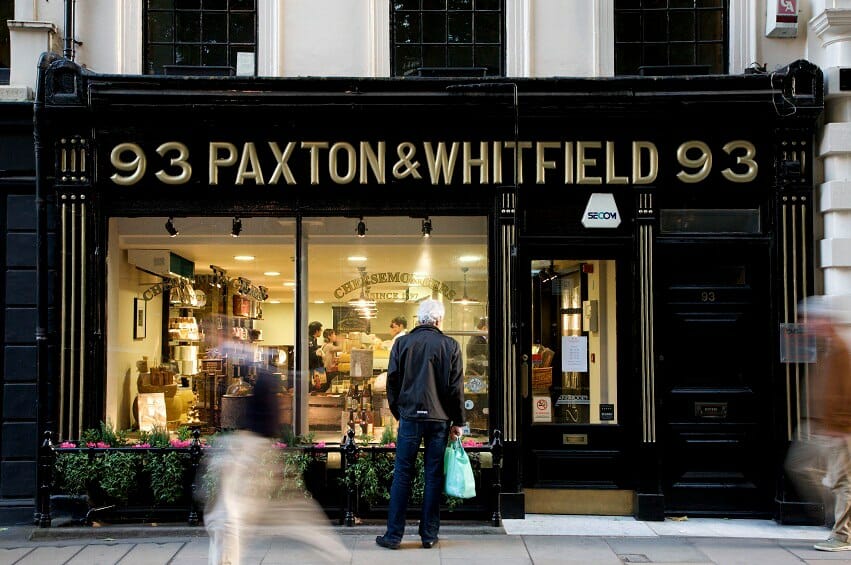 Hard cheese, soft cheese, blue cheese, they’ve got it all. Or so thought Queen Victoria when she appointed them her official cheesemonger in 1850 (yes, they’ve been going that long). Winston Churchill wouldn’t get his curds from anywhere else. And now you can buy it online. 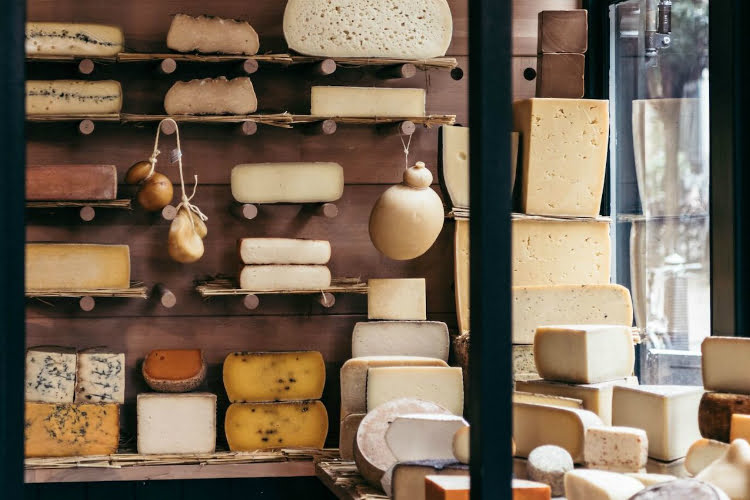 France, Italy, Britain, Switzerland, Ireland, Spain, Holland, and Germany are just a few of the countries suppling cheese to La Fromagerie. From the point it arrives on their doorstep it’s quickly whisked away to be tended to by little yellow elves in hats (their in-house cheese connoisseurs) until it’s reached its peak deliciousness. Then it’s upstairs to their mighty cheese room, ready to be sold in slabs for home delivery. 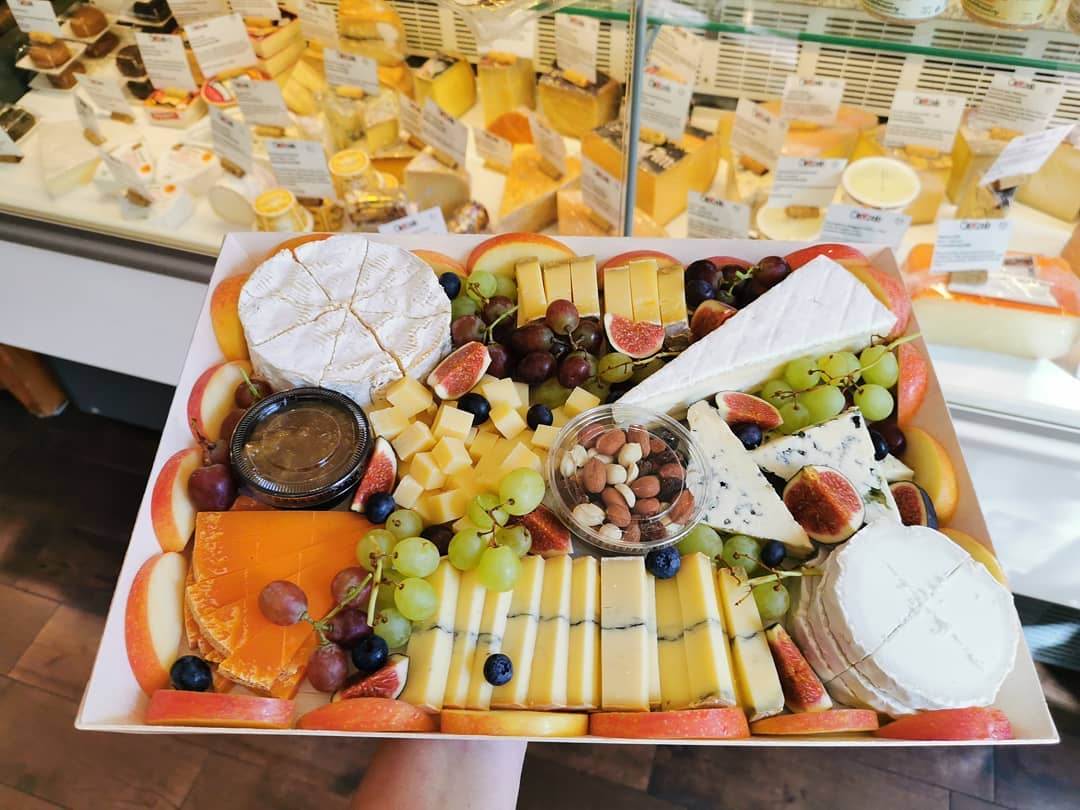 Cheezelo is small, but scrappy. Sure, passing trade has dipped a little in their King’s Cross shop, but the owner (Eleonore) is happy to jump in her car, and personally deliver the curdy goods to anywhere in Zones 1&2. 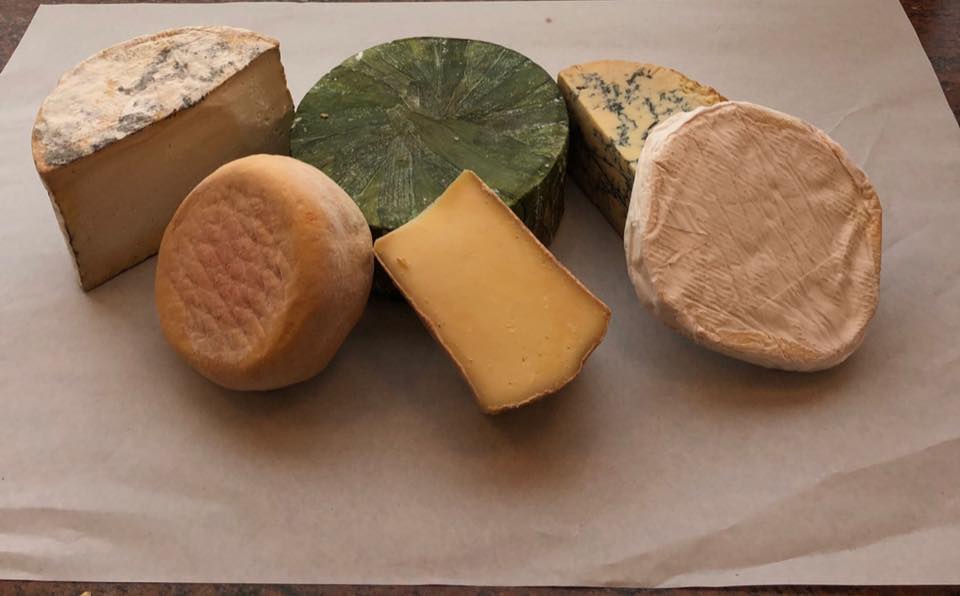 The Teddington Cheese proudly declare that they mature all of their 130 varietals in-house, so that they can sell them at the optimum moment of maturity. And they’ll deliver that optimally mature cheese straight to your door. 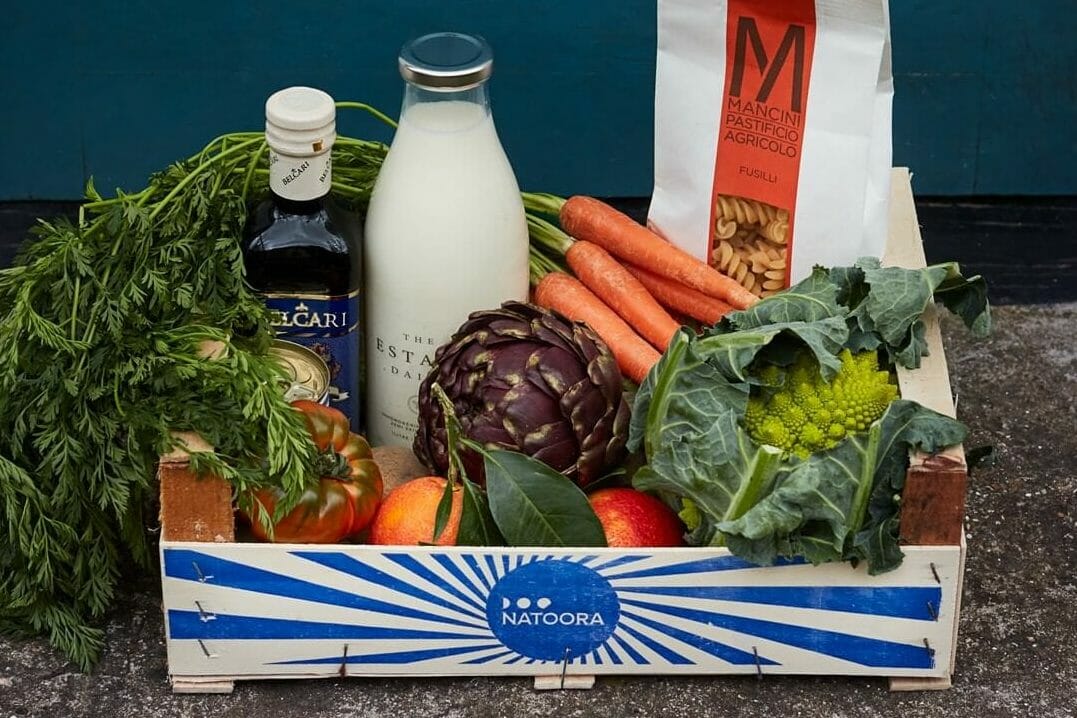 It’s another top restaurant supplier that’s opening its service up to the public. Never mind that all the supermarket van slots are taken; time to revel in baby root veg from Cornwall, heirloom tomatoes grown in Essex, Calabrian bergamots and 16th century French plums. 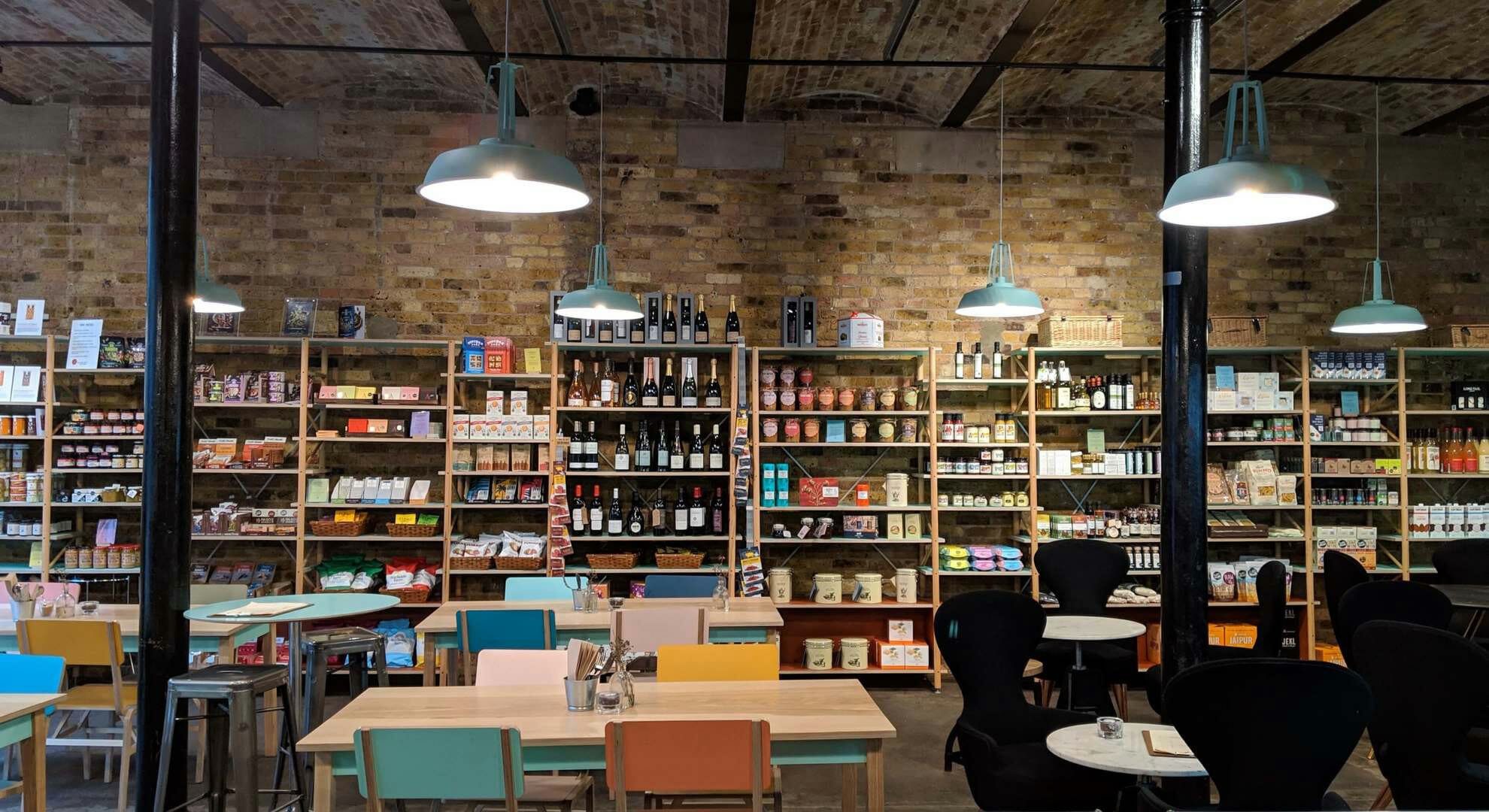 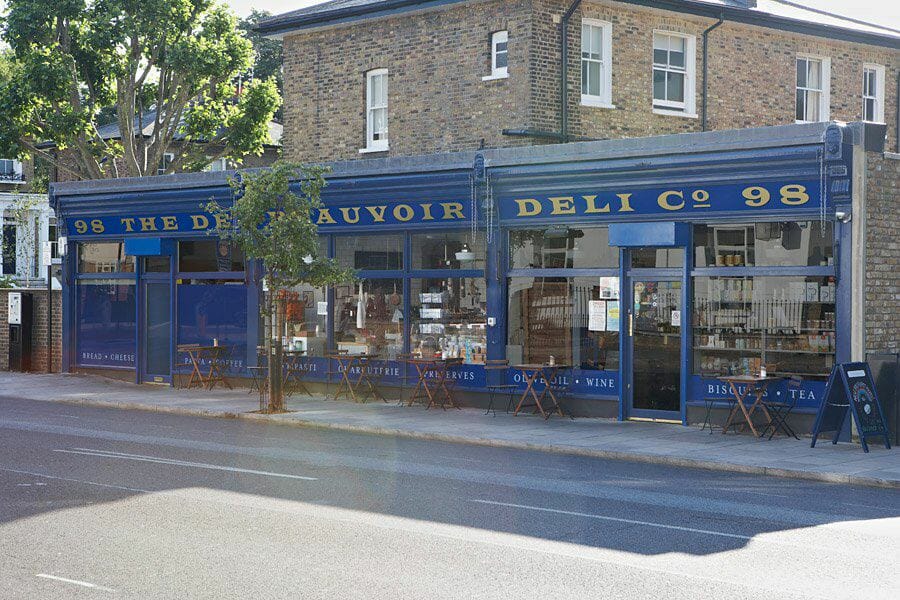 The De Beauvoir Deli sell up-market goods in Hackney, and included in that are upmarket ready meals too, including the likes of lamb & feta meatballs, and salmon & coley fishcakes. 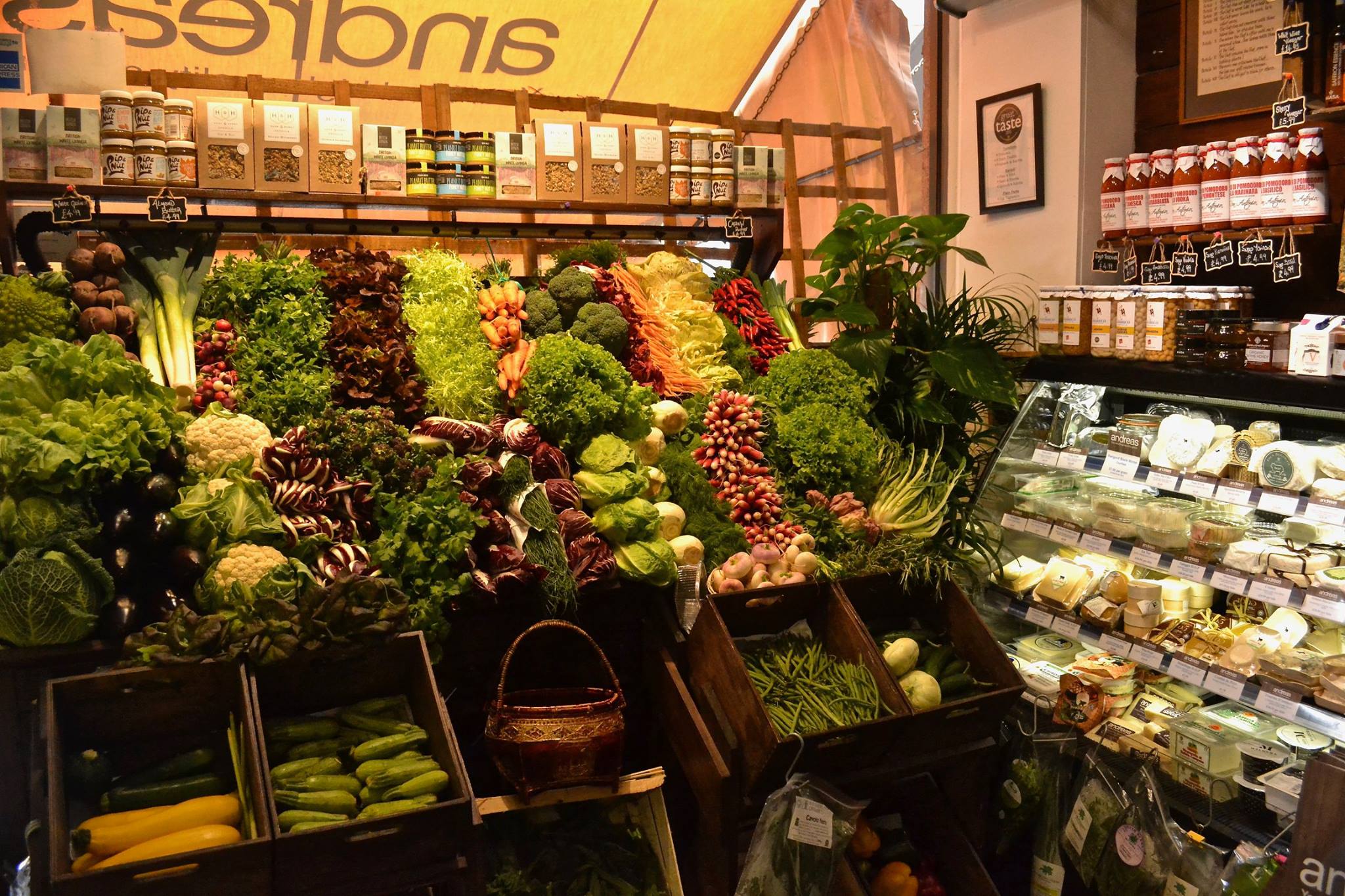 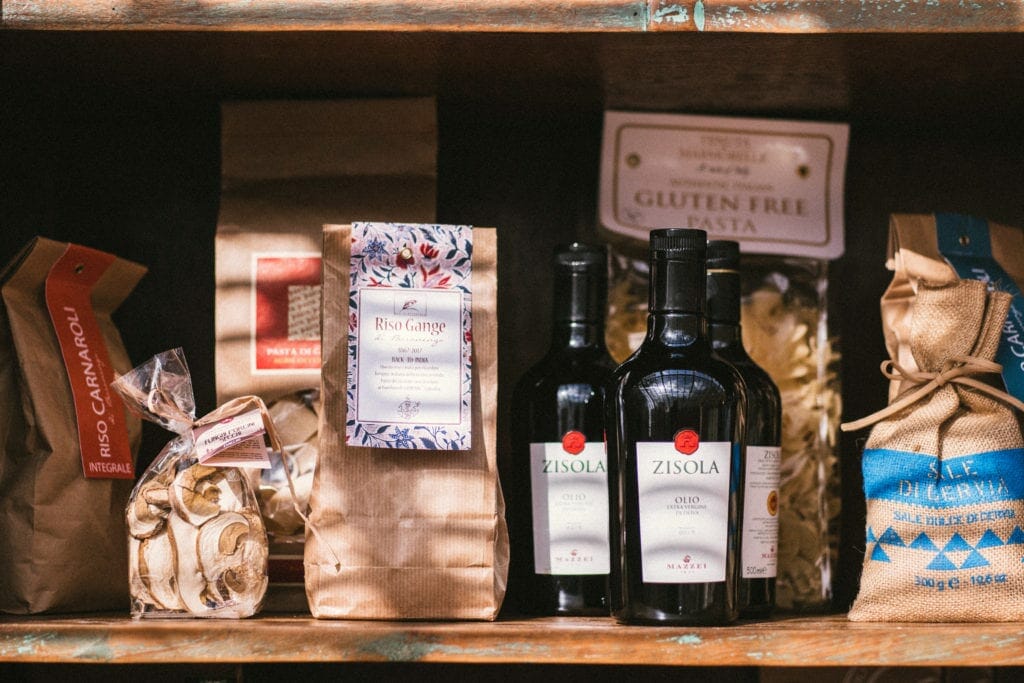 Petersham Nurseries is a restaurant whose devotion to the freshness of their produce led them to literally ask for their Michelin Star to be taken away. And now that their diners have been taken away, they’ve decided to sell that incredibly fresh produce directly to you. It all comes from their family farm in Devon, the vegetable nurseries in Richmond (t’s not just a name) and some select cheese/cured meat producers in Italy. It’s available for local delivery & collection only though, so be warned. 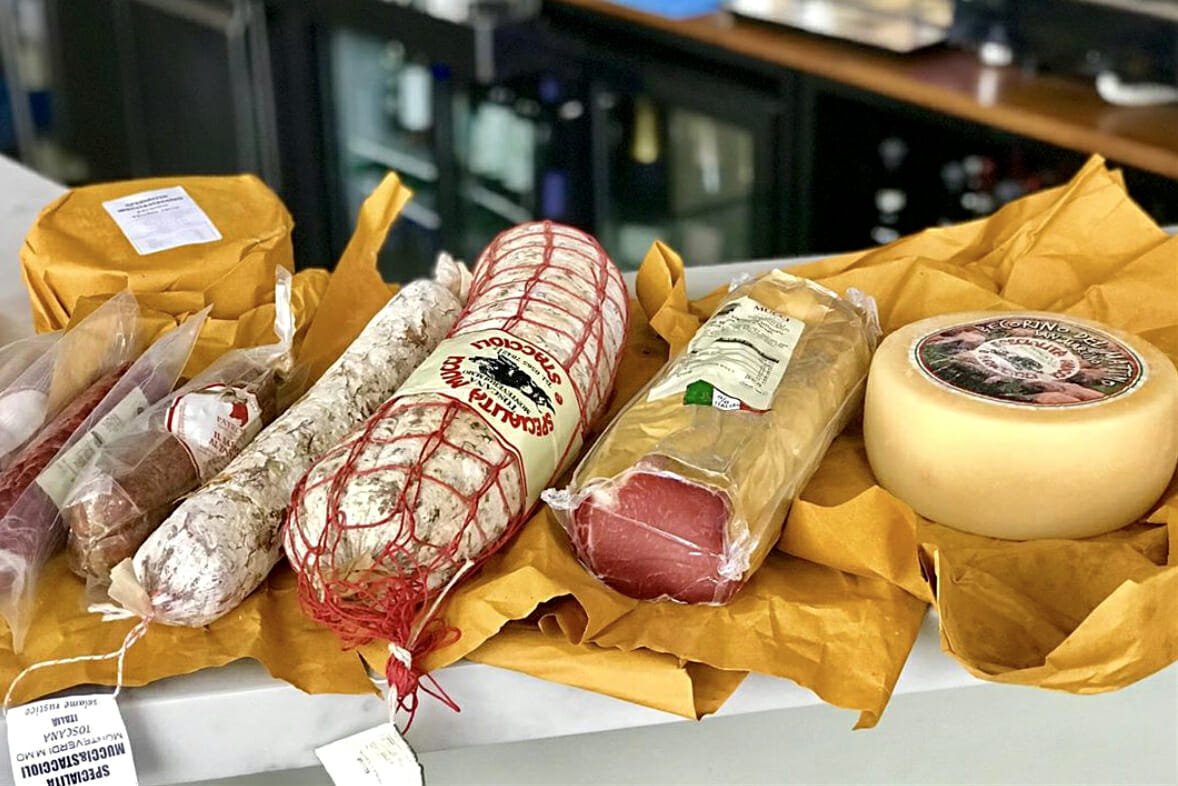 Brixton’s wonderful Tuscan restaurant has launched Maremma Deli, meaning locals can swing by the restaurant for Italian cheese and charcuterie, wine, fresh pasta (and sauces), milk, meat, fruit and veg bundles, and batches of ready meals that you can reheat at home or stick in the freezer. Which is handy, because you probably won’t be rustling up a wild boar lasagne at home any time soon.

Aubergine parmigiana, hot numbing chicken wings and shop-price wine is a dream on a normal night. During lockdown, it’s close to euphoric. Hackney’s preeminent restaurant & wine bar is taking care of things with bottles of plonk; fantastic cured meat, eggs and cheese; fresh Chinese dishes delivered from 6pm; and a host of ‘finish at home’ meals including beef shin stew and freezable dumplings. 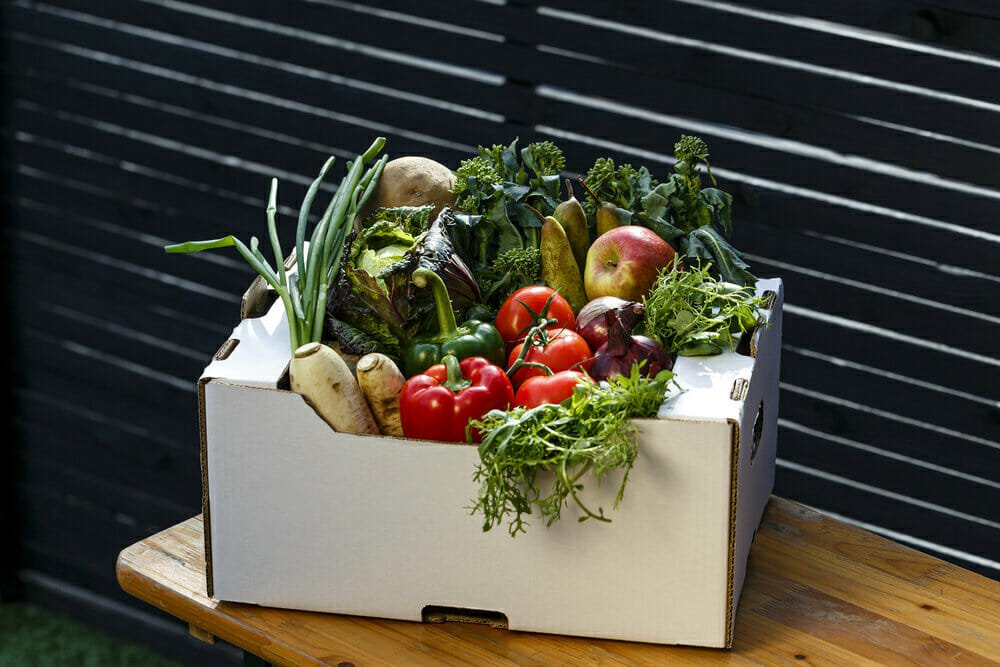 PGD collaborate with local farms, grow their own produce, and collect thousands of tonnes of food waste from the South-East to ‘close the loop’ on food production. Usually, they supply vegetables to some of the best restaurants in town, including Sketch, Hide, Leroy and The River Café. But now they’re offering deliveries to home addresses, too – meaning you can get sustainably produced, wholesome fresh fruit and veg brought directly to your home, with cheese, bread and other essentials available over the coming weeks. 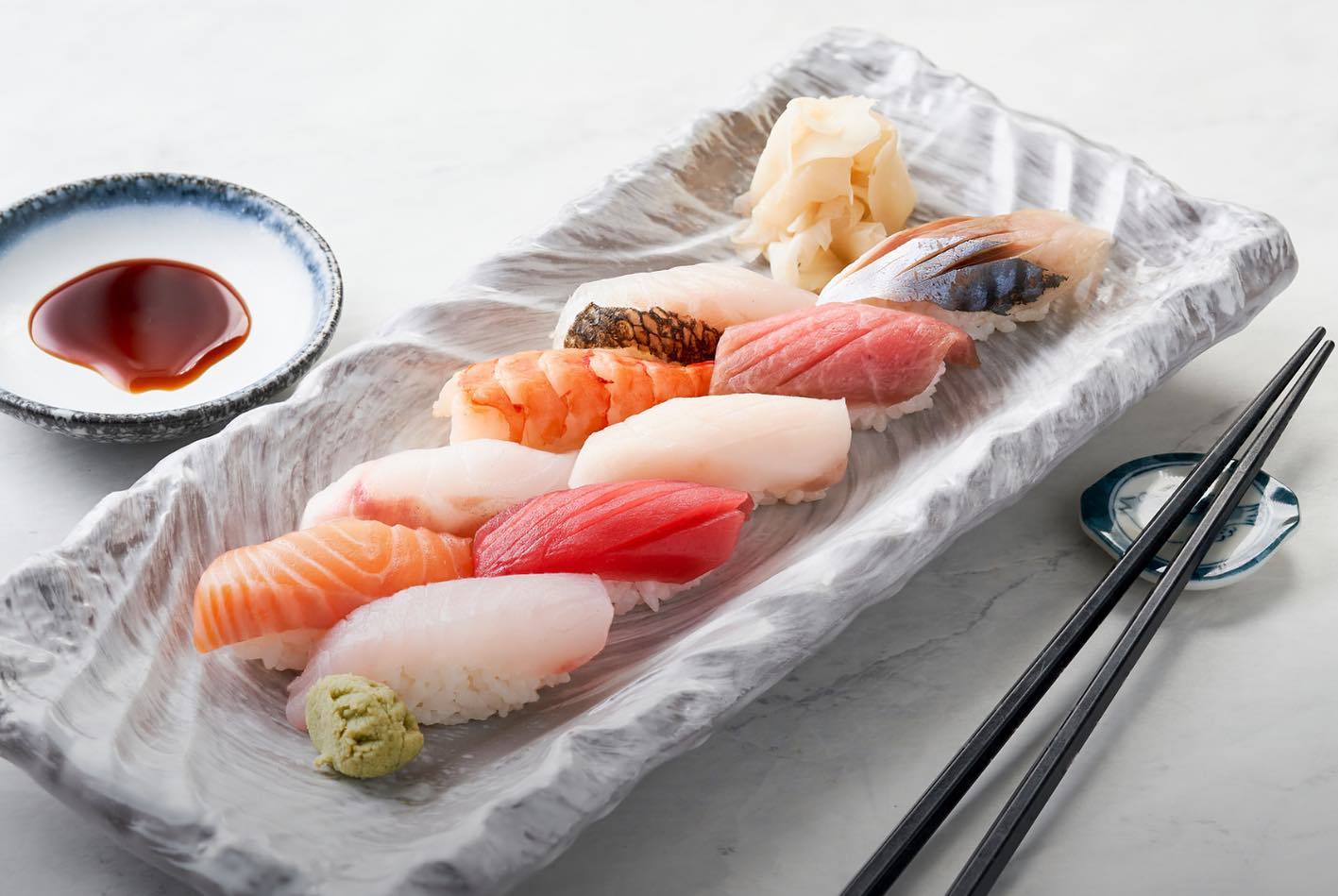 Panzers consider smoked salmon to be one of their “essentials”, which tells you a lot about them. You can order hampers, fruit baskets, and their own-brand provisions (jams, chocolates, etc.). But most impressively, they have a fresh sushi delivery service throughout central London. 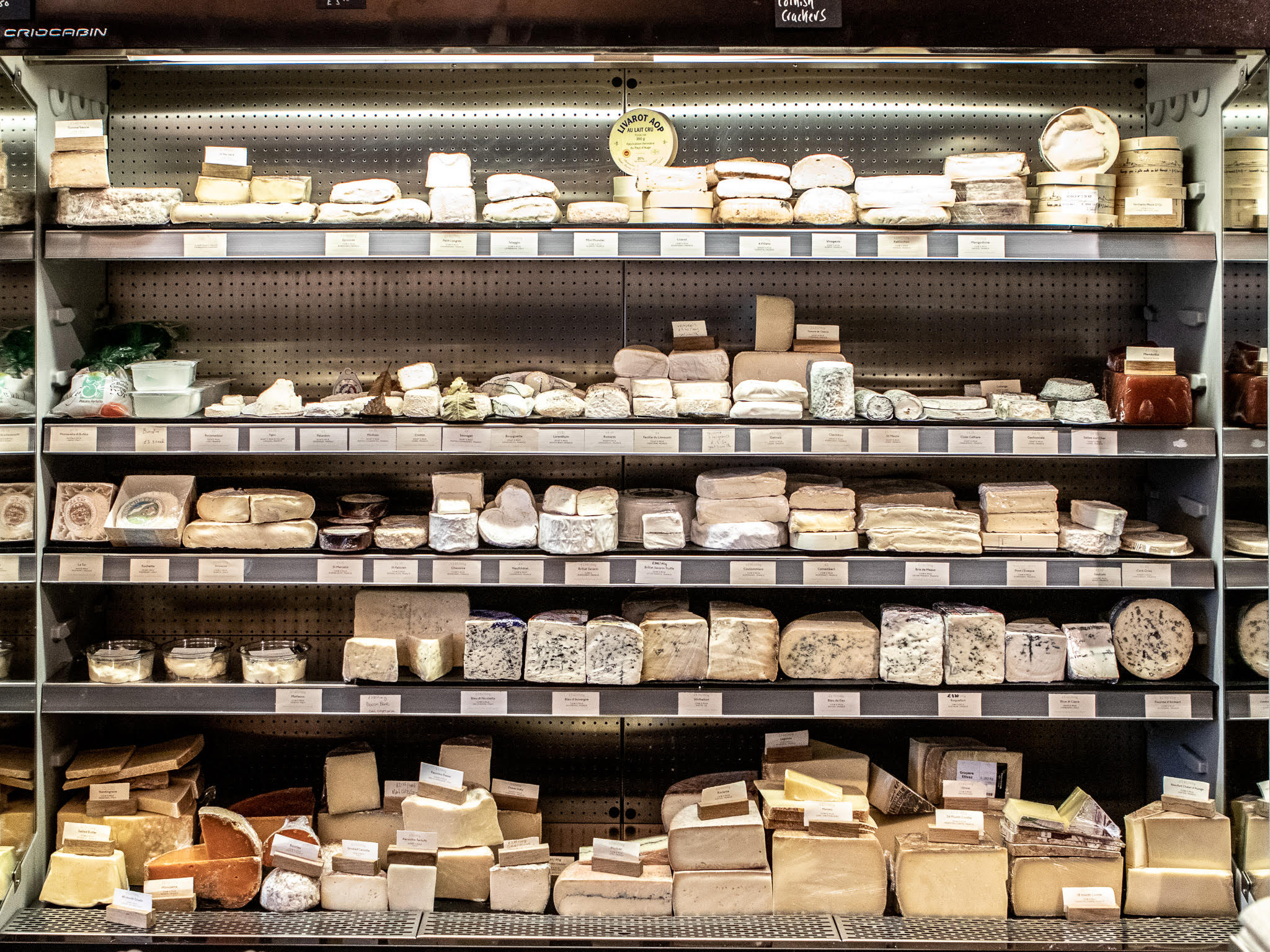 Provisions specialise in wine & cheese, which it can be argued are the only things you really need when you’re self-isolating. So it’s good that they deliver them throughout the city. 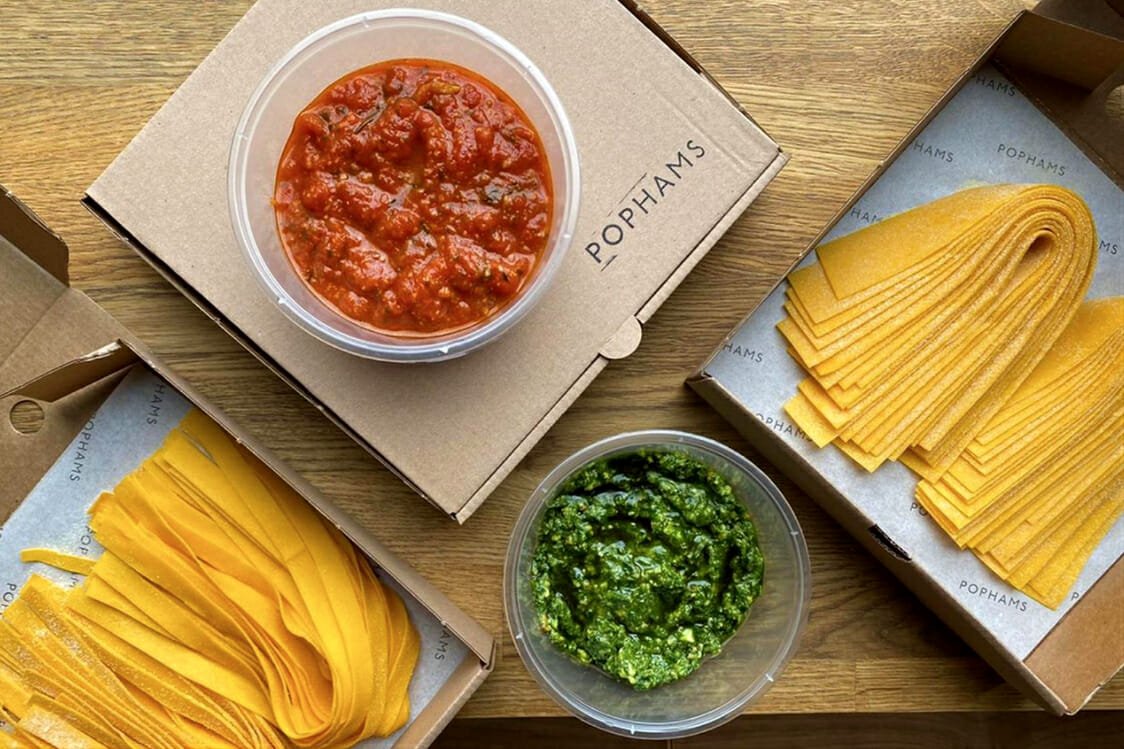 Pophams may have shuttered its cafés, but locals need not despair. Islington and Hackney residents within a mile radius can get a weekly shop in from the bakery, with fresh pasta, sauces, pastries, bread, cheese, wine and coffee dropped off at your door. Order by 5pm on Saturdays for the week ahead from the link on their instagram page – plus, 10% of every order is donated to Made In Hackney, a charity working to help feed those in need during the crisis.

London’s biggest wholesale market is rebooting – order bundles of essential and fancy fruit and veg right to your door from top quality independent suppliers. Each one is offering reasonably priced boxes stocked up with whatever’s good that week, as well as  bread, eggs and dairy (some offer vegan substitutions, too). 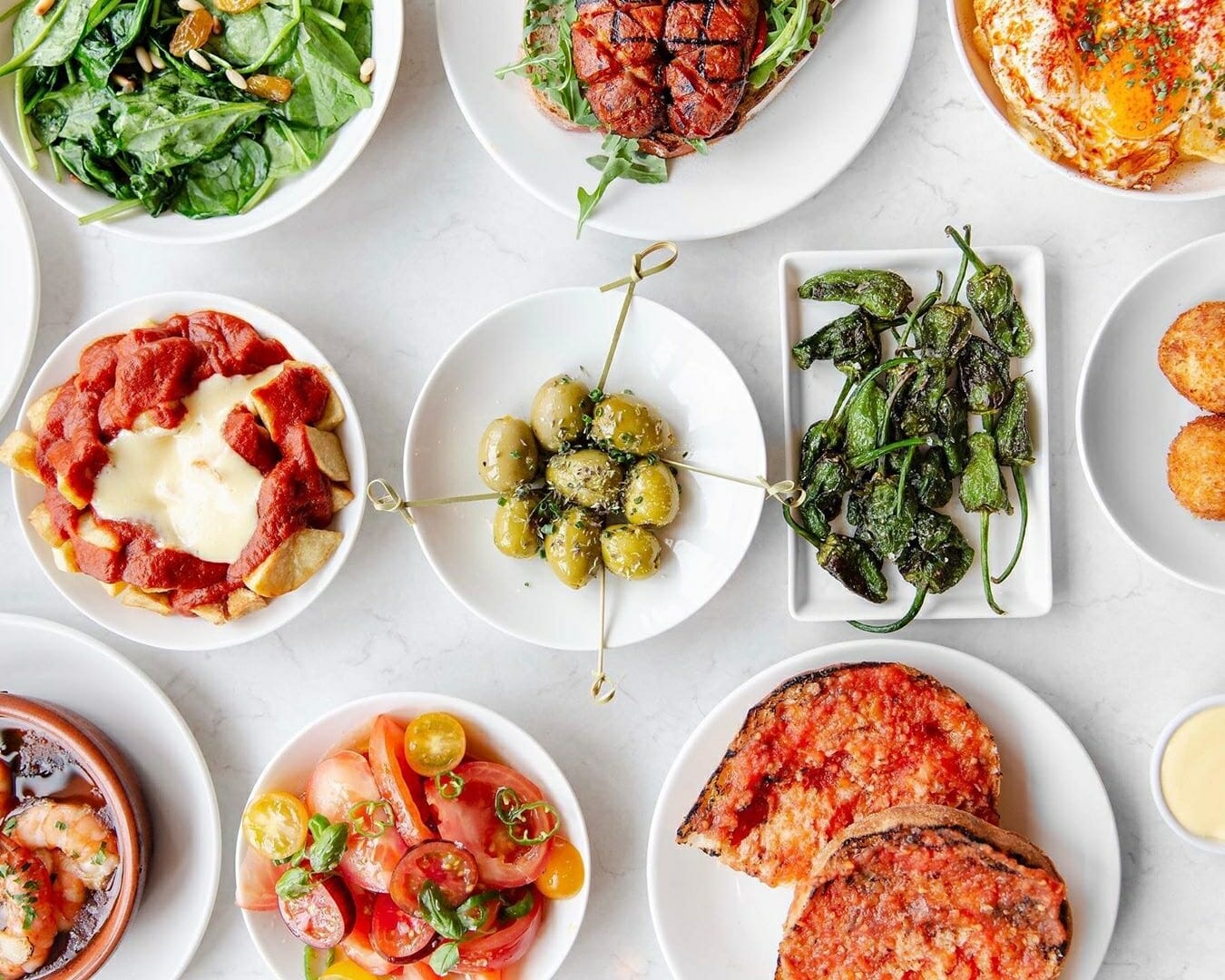 Brindisa have been importing the very best stuff that Spain makes for so many years (30ish) we almost take them for granted. But in times like these, the fact that you can still treat yourself to meltingly good Iberico ham, or fat, flavoursome cooking chorizo sausages makes us feel pretty grateful. 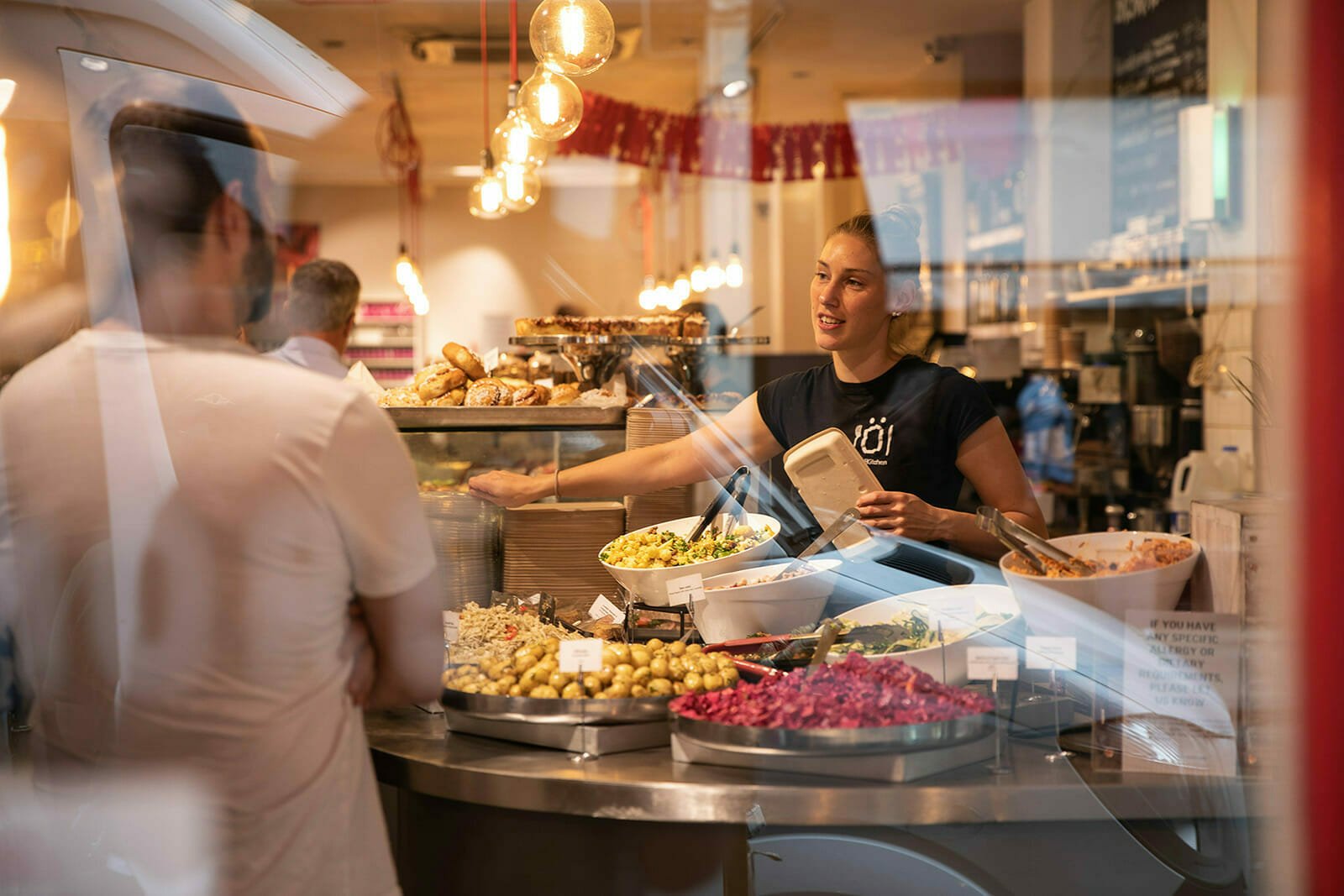 Are you a Scandinavian ex-pat, currently living in London but nevertheless craving the comforting flavours of your home country? Like marinaded herrings, Swedish meatballs, and lingonberry jam? Well, look no further than the Scandi Kitchen… 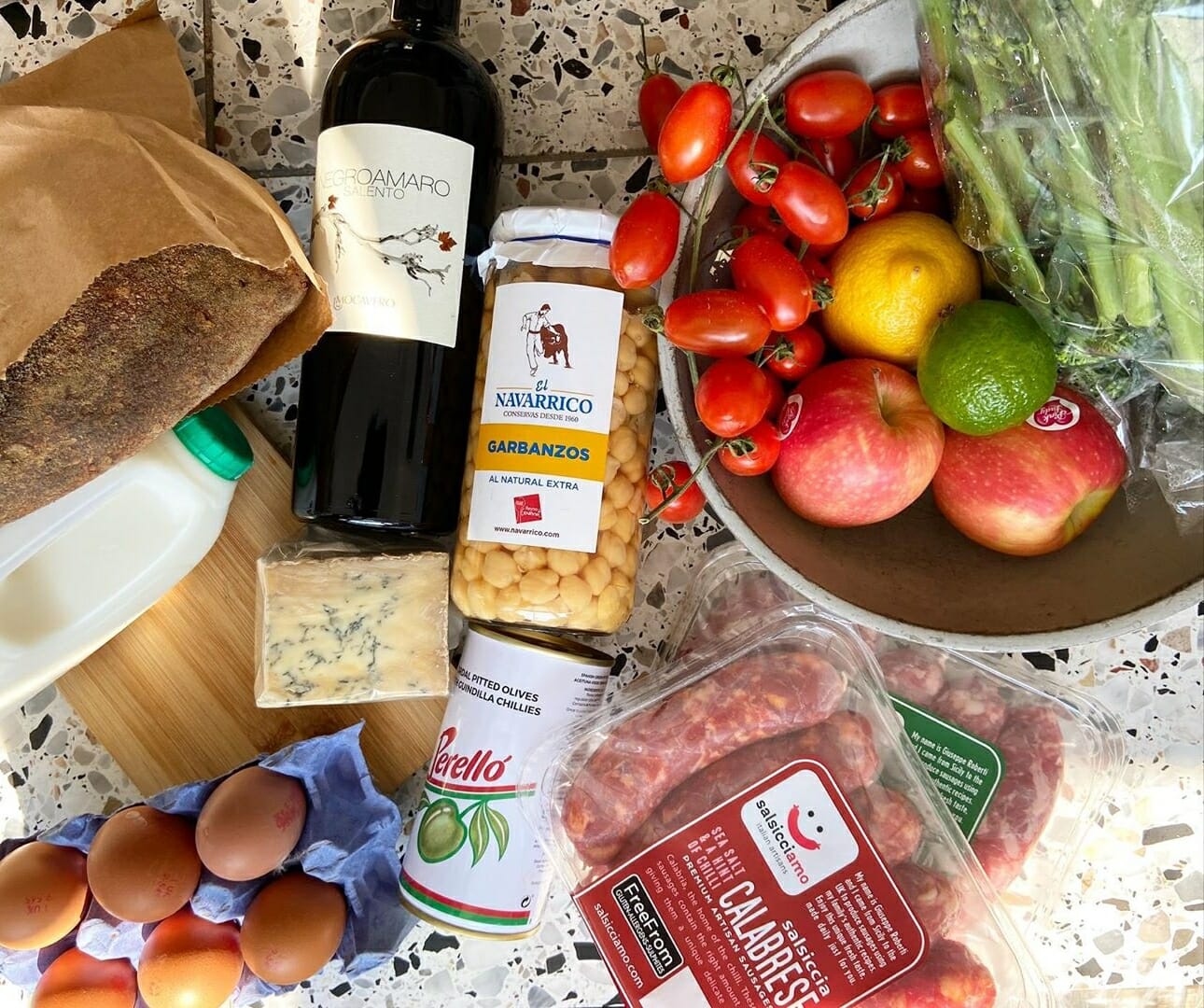 Want your food delivered, like, pre-assembled? Then check out these delivery-boasting restaurants…