48 Hours In Rome | The Weekender

Squeezing a Roman holiday into just 48 hours might seem daunting…

…But Audrey Hepburn and Gregory Peck managed it in just under two.

So there’s no need to feel intimidated; especially when you’ve got this guide to steer you through the capital’s most majestic sites, jaw-dropping art galleries, cosy trattorie, and top-rate cocktail dens. Allora, your very own personal whistle-stop tour of the best way to spend 48 hours in Rome…
– 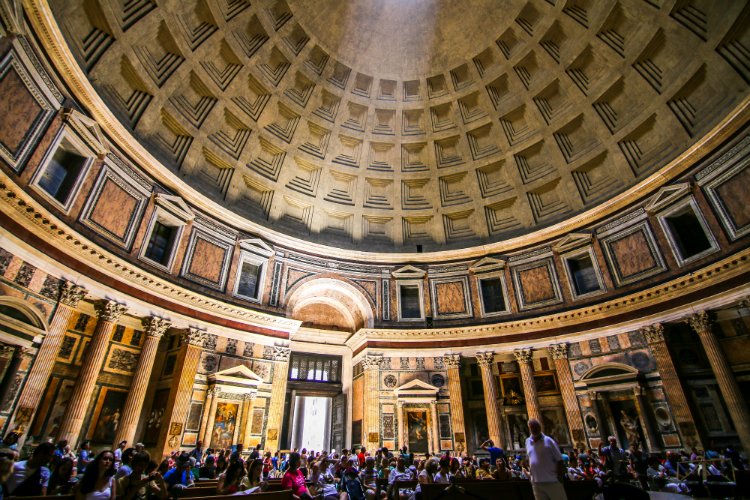 You’ve got a pretty big day ahead of you.

Luckily, the Italians invented espresso. So start the day as the Romans do, with a shot of black magic and a crisp croissant at Roscioli Caffè before heading towards the first stop on your tour, the Pantheon. Built almost 2000 years ago, and since converted into a church, its famous curved roof and oculus remains the largest unsupported dome in the world – which, as any dome fan will attest, is no small feat.

From here, it’s a ten minute walk to the Piazza Venezia, with its staggeringly massive monument, the Altar of the Fatherland. Built in honour of the first king of unified Italy and his magnificent facial hair (citation needed), its literal crowning glory is the sprawling roof terrace at the top, with 360, panoramic views of the city. 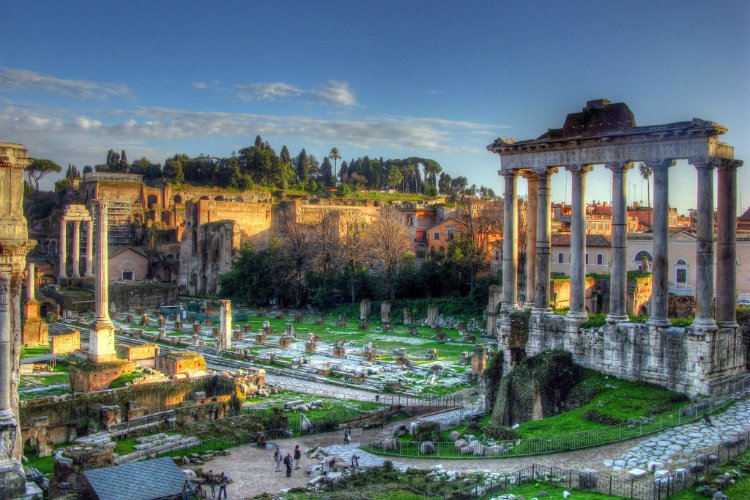 Time for a spot of lunch, and it’s an excellent excuse to make a brief detour through Rome’s Jewish quarter. Nonna Betta is one of the best eateries in the area, serving traditional fusion dishes like fried artichokes and courgette flowers, and cacio e pepe with stir-fried dandelion greens. Suitably refuelled, head back towards the Altar and swing a right past the ruins of the ancient Roman Forum. It’s a picturesque patchwork of crumbling edifices, lone columns and fragments of old facades, and well worth a stroll through on foot. Your best bet is to nab the three-in-one entrance ticket, which’ll get you access to the neighbouring Colosseum and Palatine Hill ruins to boot.

As the afternoon wears on, take a breather from the unrelenting swathes of ancient architecture in the city with a leisurely stroll through the Monti neighbourhood. Packed with al fresco eateries, bars, vintage shops and independent businesses, it’s the perfect place for people-watching with a spritz in hand. People tend to gather in the main Piazza with shop-bought booze, but if you’re after something more sophisticated, head to The Barber Shop, a cavern-like underground speakeasy in a former barber shop (bet you didn’t see that coming); or APT, a swing-soundtracked subterranean bar with top-notch craft cocktails to ease you into the evening. 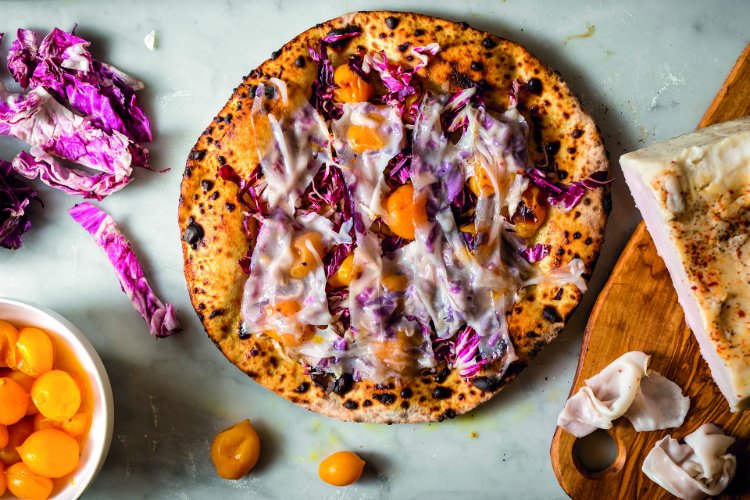 Head back north to the Trevi Fountain – best seen at night when the crowds are thinner and the statues are lit up – before settling down for a true Italian feast at Piccolo Buco, one of the most popular pizzerias in town. Here, the dough is fermented for 72 hours before topping with fior di latte, courgette flowers, and cured pork cheeks – the perfect way to pig out before bed. 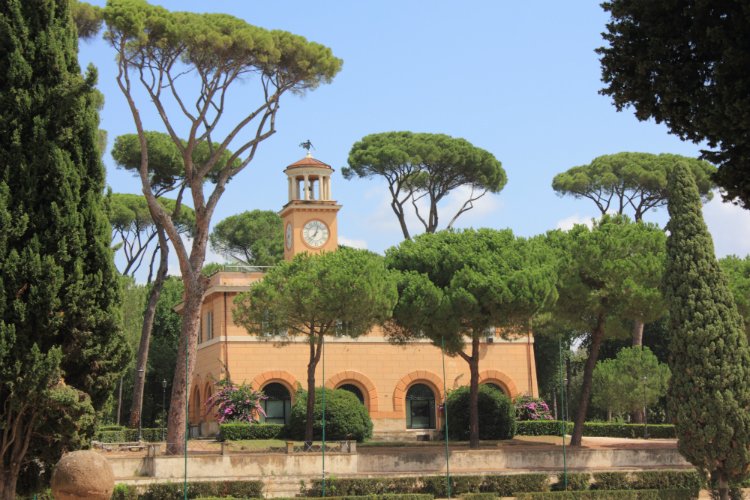 With a score of sights already under your belt, treat yourself to a more leisurely breakfast at Il Margutto, a vegetarian restaurant with a weekend all-you-can-eat buffet brunch accompanied by live music; or Babette, who serve their pastries, tarts, crêpes and eggs al fresco in their own private courtyard, accompanied by Aperol. Both are well-placed for a post-brunch stroll in the gardens of the Villa Borghese, a beautifully groomed public park that’s also home to Galeria Borghese, one of the city’s most impressive art collections, housing countless Bernini statues, and paintings by Raphael and Titian. If you’ve had your fill of traditional art, hop on a bus northwards to MAXXI, an impressive Zaha Hadid-designed building boasting a solid collection of contemporary artwork. 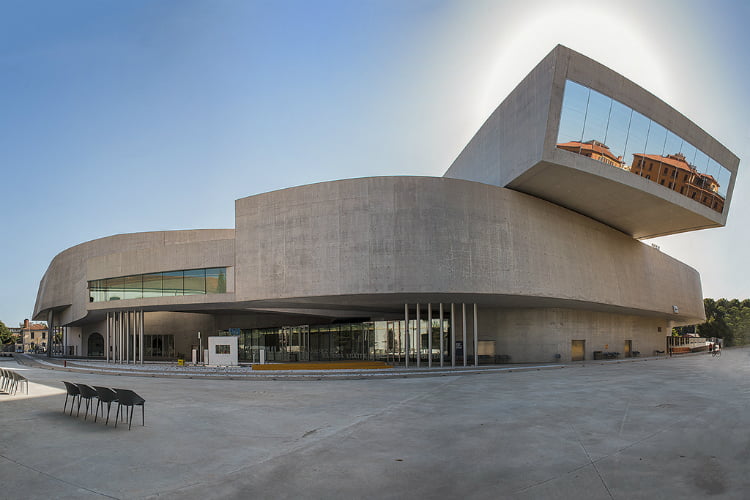 Head back down through the park and take a peek at the Spanish Steps, another of the city’s iconic piazze – Keats’ house is on your left at the bottom. Carry on down the Via Sistina, swing a left on the Via dei Cappuccini, and step into the church at the end of the street. Inside, you’ll be greeted with another of Rome’s typically gorgeous religious interiors; but head down to the crypt, and you’ll find something not quite so typical. Namely, a subterranean catacomb festooned with the bones and skeletons of almost 4,000 Capuchin monks, including such charmers as the ‘Crypt of the Pelvises’. 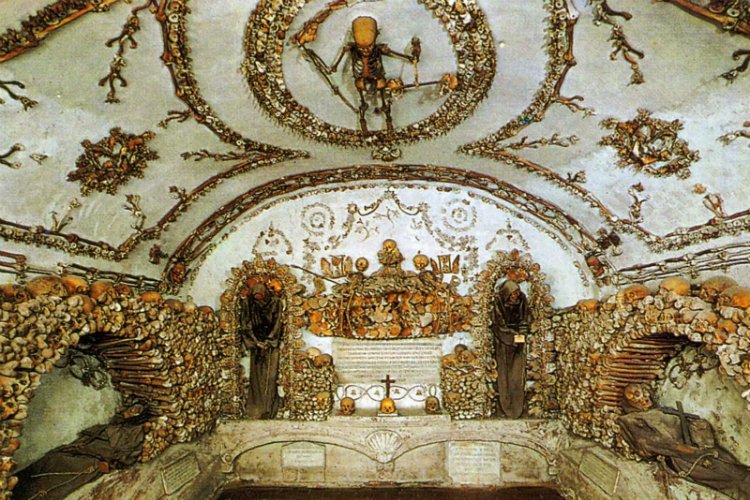 Once you’ve given the hairs on the back of your neck a good workout, hop on the N5 bus just outside the church, and enjoy the half hour tour through Rome’s historic centre towards the Vatican. Take in the sprawling Piazza San Pietro, with its saint-topped colonnade, Bernini fountain, and unexpected Egyptian obelisk before stepping inside the city’s most famous church, St. Peter’s Basilica. The vast, gilded interior is enough to take up a whole afternoon, but make sure you save time for the ancient necropolis below, the famous Sistine Chapel, and the Vatican Museums (another enormous collection of art) – plus, of course, a slice of artisan dough from nearby Pizzarium after. 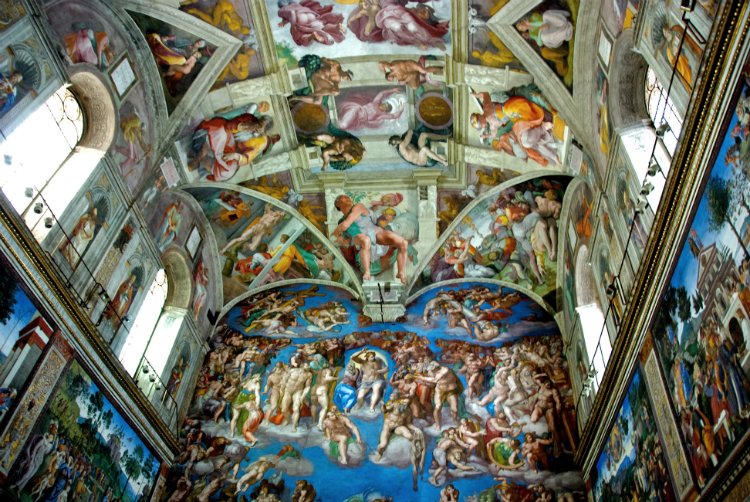 If you’re not suffering from museum fatigue by this point, some of the city’s odder collections are within easy reach – the Purgatory Museum, tucked away in the vestry of the Chiesa del Sacro Cuore in Prati, houses an assortment of items said to be burnt by the hands of souls stuck in Purgatory, desperate to make contact with the living to speed their ascent to heaven. All the items were collected by one enthusiastic priest, who died in that very room. Nothing’s been added since.

Wind up the afternoon by exploring the Trastevere neighbourhood, just south of the Vatican. The medieval cobbled streets, peeling plastered houses and occasional shrine sheltered on street corners make this one of the most atmospheric of Rome’s quarters. There’s still plenty to see, though – pop your head into the various churches, local boutiques and aperitivo spots for a flavour of the area. Art fans should check out the Villa Farnesina, a plush Renaissance mansion smothered with Raphael frescoes. 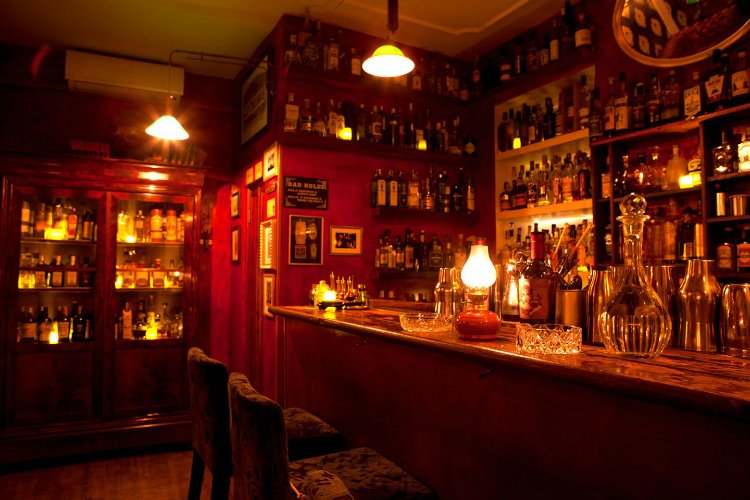 Circle round to Otello, a cosy trattoria serving excellent handmade pasta, arancini and chocolate salami for dessert, before a nightcap at Jerry Thomas Project – the city’s original speakeasy-style cocktail den. Decked out in deep scarlet hues, with cabinets of old spirits propping up the walls, it’s got a true olde worlde feel – but to get in, you’ll need to deduce the password by solving the ever-changing riddle on their website. Wrap up your night by walking a victory lap around the Gianicolo – Rome’s eighth hill, boasting twinkling views of the city below…

…Because it’s always nice to end your trip on a high.

PS Like sussing out the best in a new city? Have a gander at our Barcelona City Guide

The Best Things To Do In Prague

Everything from island picnics to Prague’s very own Eiffel Tower...