48 Hours In Toulouse | The Weekender

La Ville Rose can only mean one of two things.

Assuming it’s the latter, we have a treat for you. Because we’ve rounded up the best bits of the ‘Pink City’ (a nickname derived from its terracotta stone buildings), put them in a nice, easily navigable order; and tied it all up in one neat little package for your perusal. So even if you’ve only a few days to spend in the Occitanie capital, you can rest assured you’ve seen the best.

Toulouse is spoilt for grand, historic churches, and if you’ve got limited time, make sure you see at least one of them. The Basilique Saint Sernin was built in the 11th century, taking its name from the city’s first bishop Saterninus, who suffered a fairly grisly martyrdom involving a number of pagan priests, an excitable bull, and a flight of stairs. It’s home to a number of relics, making it a popular pilgrimage site over the years – but it’s also just really quite impressive-looking. 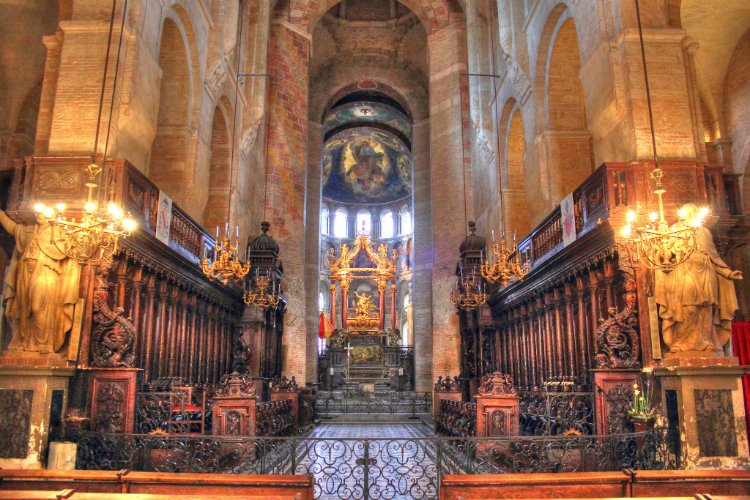 From here it’s a ten-minute stroll to the Marché Victor Hugo; a huge 19th century covered market where you can put together a breakfast of hand smoked charcuterie; freshly baked baguettes and pastries. Save your fromage purchases for Xavier’s a few doors down, though – they’ve been a fixture of the city for 50 years. Buy a cube of their crisp, hyper-mouldy house cheese while you’re there.

Next, make your way to the Place du Capitole – the vast town square dotted with tables and chairs from surrounding cafés, which plays host to an organic farmers market on Tuesday and Saturday mornings, as well as the town’s annual Festival de la Violette, celebrating the most famous local flower. Presiding over the whole square is the Town Hall, which you can have a quick nose around inside to check out the grandiose ceiling frescoes in the Salle des Illustres. 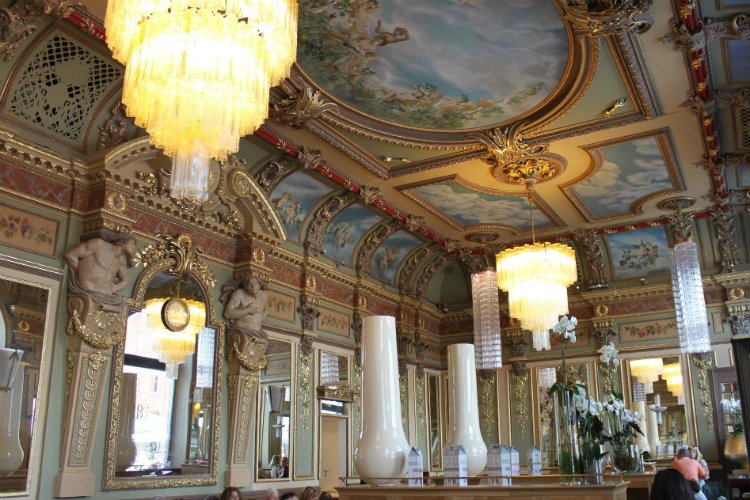 Having worked up an appetite, cross the square to Le Bibent for lunch, where you can net one of the area’s typical dishes, a Toulouse sausage cassoulet, in beautiful Belle Epoque surroundings. Or if you’re finding Toulouse a bit meat-heavy, head to Faim des Haricots – a ridiculously good value all you can eat buffet restaurant that serves all-veg fare.

Properly refuelled, head round the corner to Musée des Augustins, a former convent (complete with scenic cloisters) that’s now home to a sprawling fine art collection of sculpture, paintings and more from the Middle Ages to the 20th century. They also run regular life drawing classes and late night murder mysteries. Round off your art tour with a visit to the Bemberg Foundation – a private collection housed in a 16th century mansion, which is now home to works by Monet, Matisse and Cézanne. 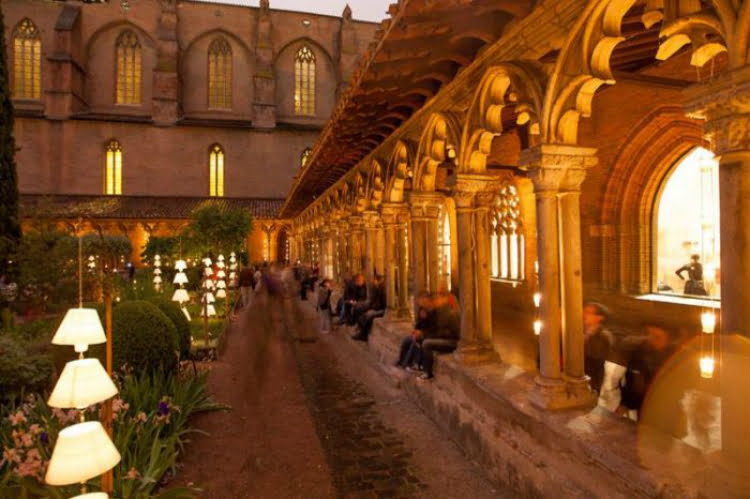 Time to sample one of France’s greatest creations at the No 5 wine bar – which is, paradoxically, the no. 1 wine bar in the world according to the World of Fine Wine. Book in for their wine-paired tapas tasting menu, or sip from their 500 bottles of grape hooch hooked up to Enomatic dispensers. Of course, if you’ve got €7000 burning a hole in your pocket, you could always plump for a glass of their 342-year-old Madeira wine, discovered in a shipwreck from 1735.

Depending on how much wine you ended up sampling, you may or may not have time to take a quick tour of the Garonne, the river cutting the city in two. Hop on at Pont Neuf, the oldest bridge in the city (despite translating as, er, ‘new bridge’) and take a round-trip to return in time for dinner at Solilesse, where chef Yohann Travostino serves up artistic modern French cuisine with a nod to his time in Mexico and California. Cap off the evening with a glass of something cold overlooking the river on La Guingette, a floating restaurant-bar with live jazz that pops up between June and September.

Start the day right with breakfast at the Michelin-recommended Sixty Two, or grab some pastries from L’Or du Pain to make for the Jardin Japonais – an entirely incongruous spot inspired by the gardens of 14th century Kyoto, complete with cherry blossom, bridge and tea-house pavilion. Work up an appetite for lunch by hopping on a bike from Vélô Toulouse (the local Boris bike) and cycling along the canal paths for a different view of the city. Wind up at the Michelin-starred Michel Sarran for an early lunch of elegantly reinvented local cuisine in their enclosed garden. 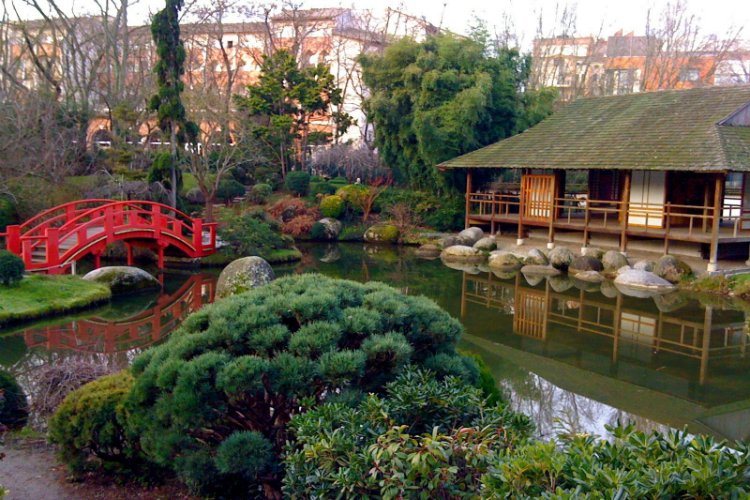 Head across the river to Les Abattoirs, a contemporary art gallery housed in the former Municipal Slaughterhouse. Nowadays it’s home to over 4,000 pieces from international artists, and also plays host to regular artsy events, from baroque concerts in the main hall to late night installations and niche film screenings. From here, head east over the Pont Sant-Michel. The Prairie des Filtres to the left here transforms into the Toulouse ‘beach’ in the summer, setting up giant slip’n’slides, beach volleyball and even African dance lessons on the banks of the Garonne.

On the other side of the river you’ll find the Jardin des Plantes, a huge, flower-filled park with a bar in the middle. Head through here towards the Musée Georges Labit; the private collection of a 19th century traveller who collected ancient curios from Egypt, the Middle East, China and Japan. Housed in a quirky Moorish building designed by Labit himself, you’ll find antique Hokusai prints, Nepali religious icons, and, of course, a mummy in the basement.

As one last cultural hurrah, head even further out to the Cite de l’Espace, a sprawling site dedicated to space travel. Here you can board life-size replicas of rockets and space stations, look at moonrocks and souvenirs from space, watch the Northern Lights in a giant planetarium, or try out the moonwalking experience. And no, it’s not just a video of Michael Jackson.

As the sun sets, head back into the city centre to Moloko – a retro drinking den with a seasonally changing (and adventurous) cocktail menu, regular DJ nights, and live music to boot. Down the road you’ll find La Cave au Cassoulet, a typically charming French bistro with candlelit tables, white tablecloths and good food and wine. Wrap up your evening at Les Tricheurs – a board game café that will be all the more entertaining for having instructions in French. Make up your own rules and instigate a drinking game involving some of their alarmingly colourful cocktails.

After all, Scrabble’s the perfect start to a night on the tiles.

PS Like whirlwind city breaks? Read our guide to the best way to spend 48 hours in Barcelona