The Best Bars In Singapore

The Best Bars In Singapore

It can be hard to find a good bar in Singapore…

…because so many of them are hidden underground, behind seemingly padlocked doors, or on the other side of a tattered old Muhammad Ali poster at the back of a barbershop.

So we’ve taken the grave task upon ourselves of hunting them down; whether they’re a hidden speakeasy, or rooftop bar perched over the city’s twinkling skyline. There are bars with drinks made into gummy bears, bars that practically have an entire extra building filled with gin, and bars that serve cocktails made with wild garlic. Which all make great date spots… depending which number date you’re on.

So without further ado, the best bars in Singapore…

PS You can explore all of our favourite restaurants, bars, hotels, and things to do in our full Singapore City Guide 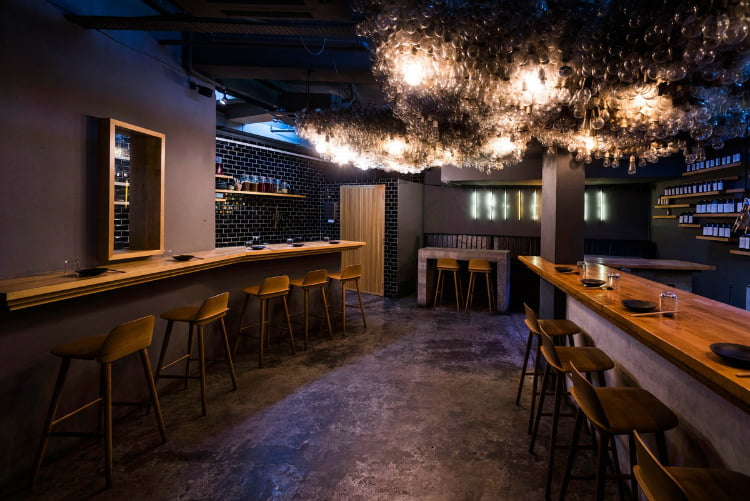 This boundary-pushing cocktail den hidden beneath the pavements of Club Street sports cool grey cement walls, minimalist furniture, and a cloud-like sweep of lightbulbs suspended over the bar – which is how you can tell that the drinks served underneath are ingenious inventions. Order the Snow, made with yuzu yoghurt, sake and a floating boat of white chocolate; or the Free 6lack, a potent mix of sherry vinegar, brown butter and wild black garlic. Or if you’re feeling particularly brave, you can leave it all in their hands, and order the snack-paired omakase.

Easily the most downright impressive-looking of Singapore’s bars, Atlas is inspired by the spectacular grandeur of hotels past. Besides all the usual trappings of Art Deco decadence – elegant bas-reliefs covering every patch of ceiling; geometric wrought iron balustrades; beaten metal murals above the doors; elegant retro chandeliers, etc. – the space is dominated by a huge three storey tower of gin, housed in what looks like Gatsby’s old elevator shaft. It says a lot that the decor still doesn’t outshine the drinks though, which are given a vintage twist by former Artesian bartender Roman Foltán, and have earned the bar a top ten ranking on the World’s 50 Best Bars list.

A longstanding entry on the World’s Best Bars list, Tippling Club recently came up with a pretty sweet idea for their new menu. Literally. They’re now continuing to one-up everyone by offering you a preview of every single drink on the list, in the form of gummy bears. Taste them all, order your favourites, and they’ll arrive in full drink form – presented in anything from a baby’s bottle, to an elegant champagne flute with an edible lipstick on the side. 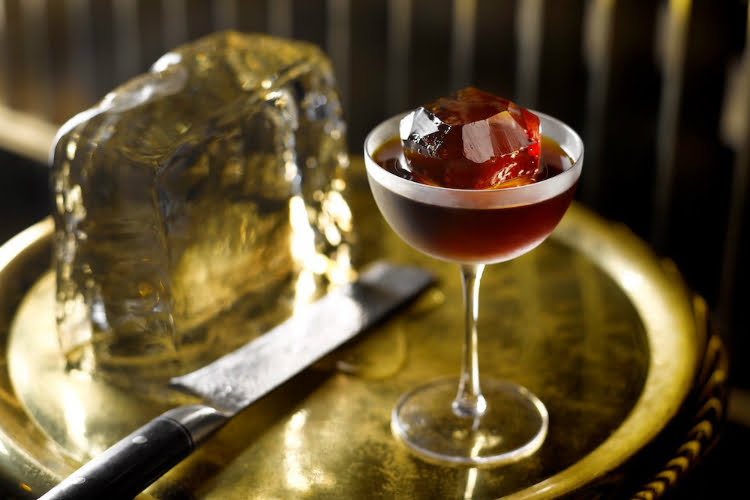 If you want a good drink in Singapore… go to Manhattan. Because the languid, gentlemen’s club-style bar in the Regent Hotel was crowned Asia’s Best Bar in the 2018 list. Take a seat on the welcoming Chesterfield sofas and you’ll soon see why – the drinks are mixed with an unrivalled panache here, ranging from new creations to old, forgotten recipes. And in a move that can’t be entirely unrelated to its success, it’s also the only place where you can get a bottomless cocktail brunch; feat. oysters and a build-your-own boozy milkshake bar using whiskies aged in-house.

Blu Jaz is a jazz bar so perfectly eccentric that it could be lifted straight out of an indie romcom. Follow the mellifluous sax notes floating through the backstreets of Kampong Glam and you’ll find it, taking up residence in a traditional shophouse. The interiors are eclectic to say the least, filled with roaring 20s murals, light fittings made from old trombones, and, of course, the stage – onto which regulars in the crowd frequently step up to join the band for a song or two. The drinks may not be winning any awards here, but the vibe’s unlike anything else in the city.

Self-described as “a monstrosity of a monument to bad taste”, S.D. is a deeply irreverent temple to cocktail-making. Laid-back coffee shop (serving glittery cold brew) by day, raucous mixologist’s lair by night, the barkeeps here sling together ingredients to make a hot mess of a cocktail, like the Cake Eater – which sees a herbal liqueur and bitters flung together with liquid chocolate. The team are great craic, and make it feel like the kind of place that’ll stay open as long as people are still drinking. 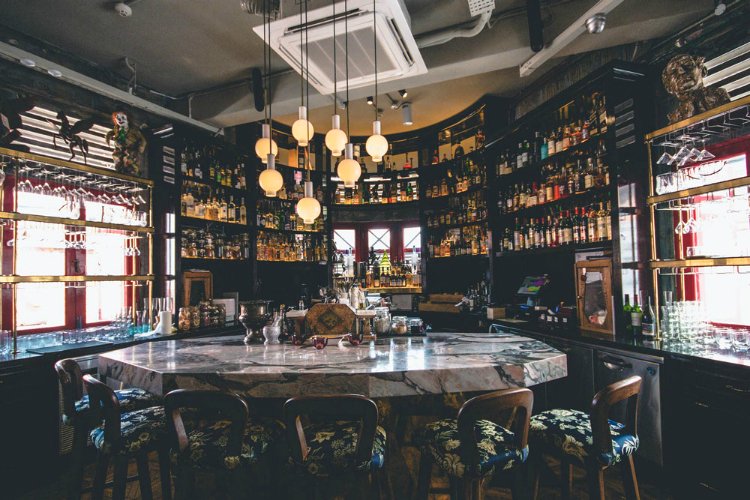 Set in one of Chinatown’s most striking art deco buildings, Potato Head is a one-stop party shop. Because like their tuberous namesake, you can put together exactly the kind of evening you want: there’s a colourful burger restaurant-meets-hawker stall on the first and second floors, while the third is home to Studio 1939 – a serious sort of cocktail bar with elegant vintage furnishings and a backbar that means business. Glug one of their Buffalo Soldiers (made with pandan-infused bourbon) before finally heading up to the fairy-lit, tropical-themed roof bar to drink in the view.

This bar is closed – to anyone who doesn’t know to give the apparently padlocked shop door a little push. It doesn’t really even have a website to speak of. But persevere in tracking it down, and you’ll be rewarded with sleek, contemporary speakeasy interiors; some of the best bartenders in the biz; and the cocktails to match. Try their delicious take on the 19th century Sherry Flip – or just tell the highly-skilled barkeeps your tastes and let them choose for you. 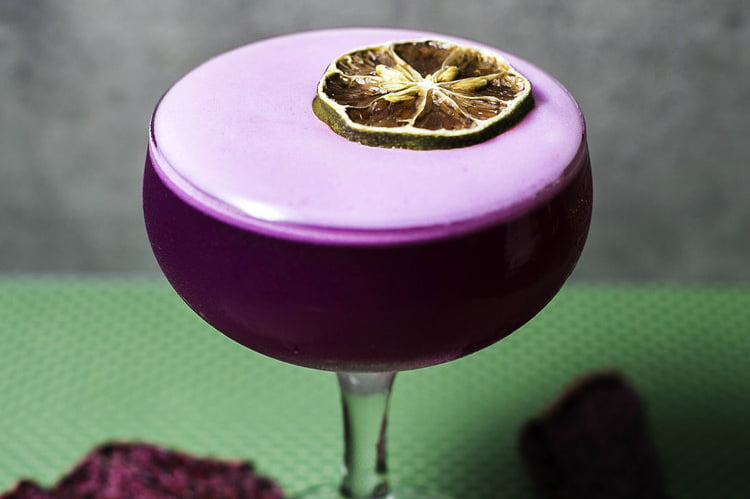 You might pass the Secret Mermaid on the way to the MRT (Singaporean tube) without realising – because by day, it operates as a Japanese salad and sushi bar. When 5pm rolls around, however, the Mermaid takes residence, specialising in American craft spirits, like Indigenous (vodka made with apples from the big apple) and a smoked-salmon vodka from Alaska. The bar’s as much a tasting room as it is a cocktail den, so ask the team for a sample of whichever bottle catches your eye – they’ll be more than happy to oblige.

Native was founded with the idea of making cocktails using the best of Singapore’s local ingredients. Which isn’t a terrible concept, considering that includes ingredients like tumeric, cinnamon and pandan. Oh, and crispy ants. 27 year-old founder (…we know) Vijay Mudaliar cut his teeth at Operation Dagger, and has been shaking things up at Native ever since – a move that’s won him piles of awards and critical acclaim for his troubles. 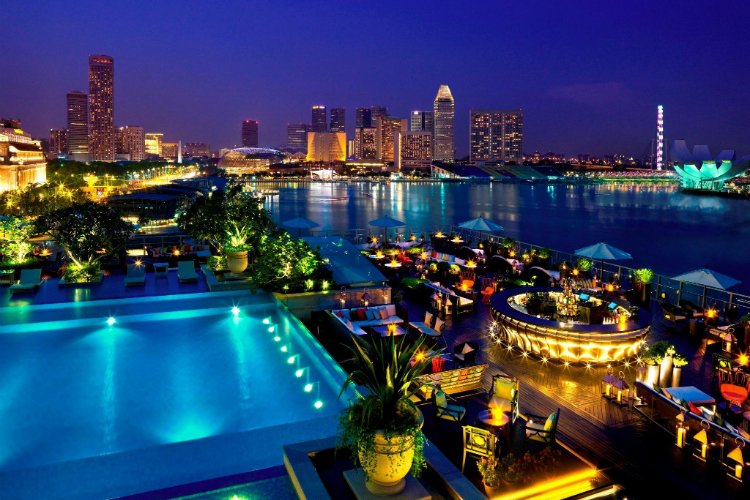 Besides providing you with an excuse to make puns about getting lit all night, Lantern is a suave rooftop bar with regular DJs, a sweeping view of the marina skyline, and a covered pergola area in case one of Singapore’s flash thunderstorms turns up to the party. The infinity pool is sadly only for hotel guests, but you’ll be more occupied with the liquid in your cup, anyway – they do two takes on the Singapore Sling here, and they’re both highly commended. It’s also worth noting that they drop their cocktail prices after 11pm, so it’s a good spot to hit later in the evening.

This bar operates on the philosophy that everything contains both good and bad. Which is all well and good, unless its applied to cocktails. Happily the only naughty parts of the drinks are their themes, based on the seven deadly sins – the flavours, on the other hand, are quite heavenly. Dare yourself to order the Mr. Bean, which unexpectedly combines Frangelico and vodka with strained beancurd.

It’s worth it – unless, of course, you’re tofu-ll.

PS Planning a night out? Follow up with our guide to the best restaurants in Singapore