The Insiders’ Guide To Tulum

The Insiders’ Guide To Tulum

The Mayans were one of the most successful, creative and wise of the world’s ancient civilisations.

Still, they had to make a lot of sacrifices to get there.

And one of the best places to admire their hard graft is Tulum, a bona fide paradise perched on 40 foot cliffs on the coast of the Yucatán Peninsula in Mexico. Hitting its peak in the 13th-15th centuries before the old Spanish Conquest kicked off, Tulum’s Mayan citadel is one of the best preserved ruins in the country. And after years of being a small, secluded coastal town known only to locals, backpackers, and Mesoamerican civilisation enthusiasts, it’s suddenly been thrust into the limelight thanks to its idyllic white sandy beaches, incredible food, and environmentally friendly credentials. And naturally, we’ve sifted through that sand to find the best spots to stay, eat, drink and explore.

So behold, your insiders’ guide to Tulum…

Tulum’s most easily accessed by flying in to Cancun airport (British Airways run three direct flights a week), then hiring a car, hopping onto a shuttle bus or flagging a taxi for the 1.5 hour drive to Tulum (about £35 by cab). The place is essentially split into three main areas; the beaches; the old town or ‘el pueblo’; and the ruins. It’s a touch too far to walk between the three – so hire a bike at your accommodation, or hop in a cab. 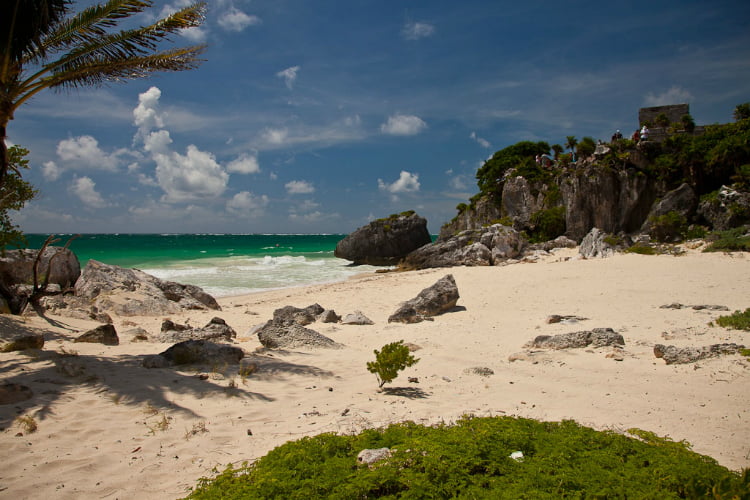 The area’s unspoilt beauty is one of its biggest attractions, and they’re pretty dedicated to keeping it that way. Tulum’s eco-friendly rep is a big draw for this new wave of vacayers, but bear in mind that it also means you can’t always get electricity (hotels often cut-off at midnight), Wi-Fi can be patchy, and you shouldn’t flush your loo roll. As Kermit sang, it’s not easy being green.

Now that we’ve got the formalities out the way, we can get stuck into the good stuff – namely, the jaw-droppingly stunning hotels on this patch of the earth. If you’re planning on going full hermit, hire your own Azulik cabana, in which you can do…as you like. Each naturally crafted hut has 360 views; there’s a Mayan spa on-site; and, like every self-respecting cabana village, a fine-dining restaurant on stilts. Similarly plush are the glamping options at Habitas; deluxe wall tents fitted with hardwood floors, al fresco rain showers, and canopied views over the sea. 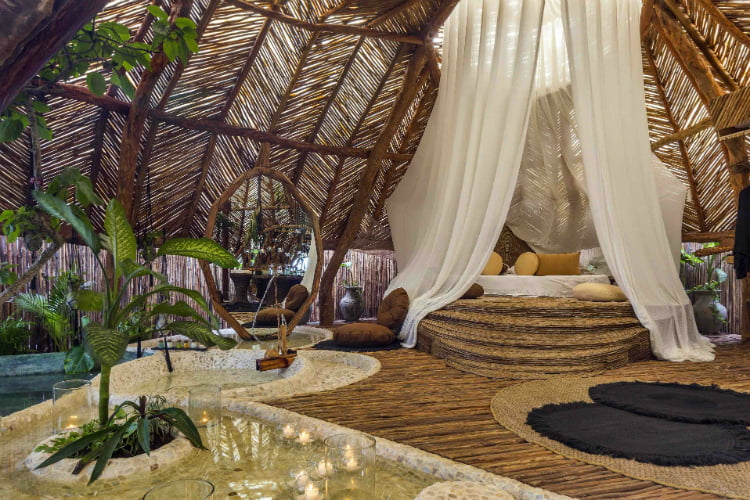 Recently opened is Casa Pueblo Tulum, a ‘stay-and-work’ hotel from none other than The Umbrella Project (the talented drinksmiths behind The Sun Tavern and Discount Suit Company in London). Designed to feel like a house, the place is home to 16 (beautifully minimalist) rooms, alongside a coffee shop, garden terrace, pool, and communal space, where, naturally, you can score cocktails with local flavours. 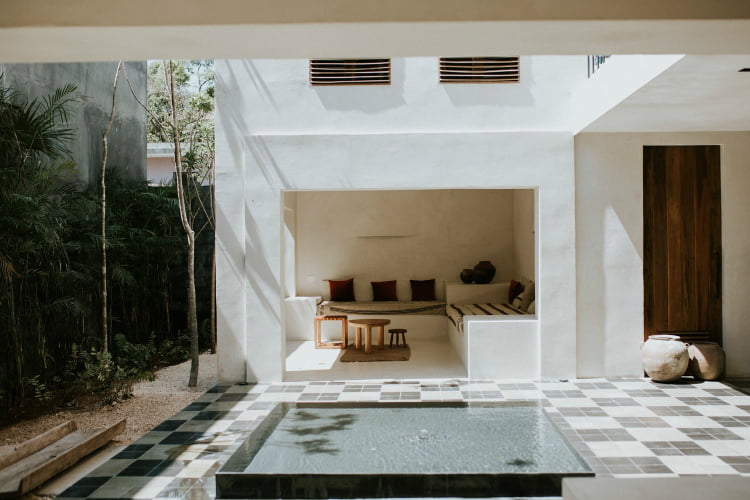 If you’re after more of a hotel feel, The Beach lives up to its name, with 28 boutique hotel rooms, ranging from the so called ‘standard’ rooms (merely boasting direct access to the beach) to the decadent rooftop suites, complete with a private terrace and jacuzzi. The beautiful Nomade, meanwhile, focusses on activities – expect yoga on the beach, live music, and regular DJ nights. It’s just next door to the well-established boutique hotel Be Tulum; whose gorgeously designed rooms come with naturalistic designer furnishings, palm-shaded hammocks, and some even with their own pool. The food here is top-shelf too; with a raw bar serving oysters and ceviche; a BBQ spot grilling whole lobsters; and a fine-dining offering from a Michelin-starred chef. 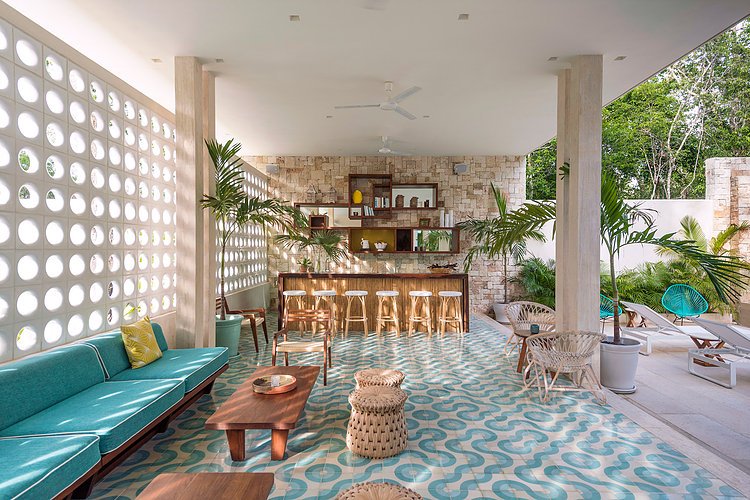 For more budget-friendly options, take a look at Elements Tulum; a small but perfectly formed hotel featuring understated, well-designed rooms surrounding a picturesque plunge pool; or Hotel Tiki Tiki, which looks like its been ripped straight out of a 60s travel catalogue. Each room comes equipped with a hammock as well as a bed, and it’s all set within a luxurious jungle spa resort.

Obviously, it’s imperative that you indulge in some beach time during your stay – the stretches to the north end of Boca Paila road are particularly scenic, but Paradise Beach is an easily accessible spot just outside of Tulum, loaded with bright white sand and turquoise Caribbean waters. Though frankly, with a name like that, anything less would just be embarrassing. If you’re in Tulum between May and October, you might even catch sight of a few sea turtles coming ashore to lay their eggs. 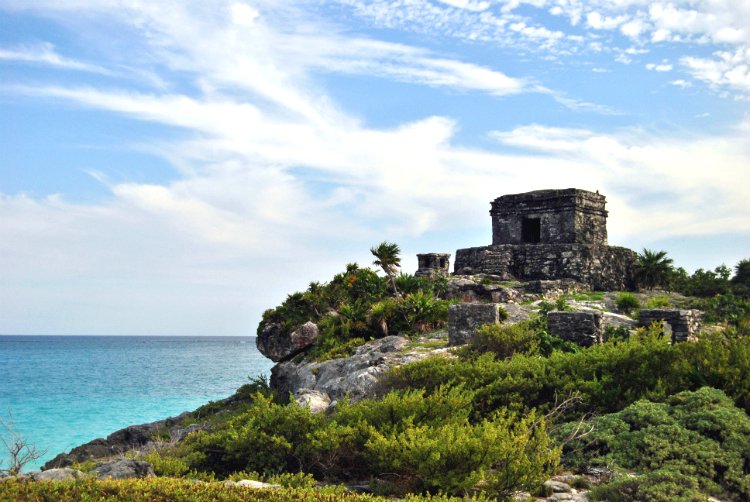 When you’re not aggressively sunning yourself somewhere scenic, spend a day exploring the ancient ruined city on the top of the cliffs. The main site is the Temple of the Frescoes; a Mayan observatory that was used for measuring movements of the sun. Take in the stepped facade of the Temple of the Descending God and the neighbouring Castillo, a kind of ancient lighthouse, before taking a dip in the Caribbean below and looking back on the ruins from the sea.

To the south of Tulum is the biosphere reserve (and UNESCO World Heritage site), Sian Ka’an. Here you can tour lagoons teeming with wildlife, snorkel around the barrier coral reef, and take boat trips up a 1000 year-old canal. Rivalling all this is Xel Há, dubbed the world’s largest natural aquarium – something you can verify while floating down a river in a rubber ring, ziplining into the water, or snorkeling in a hidden grotto. 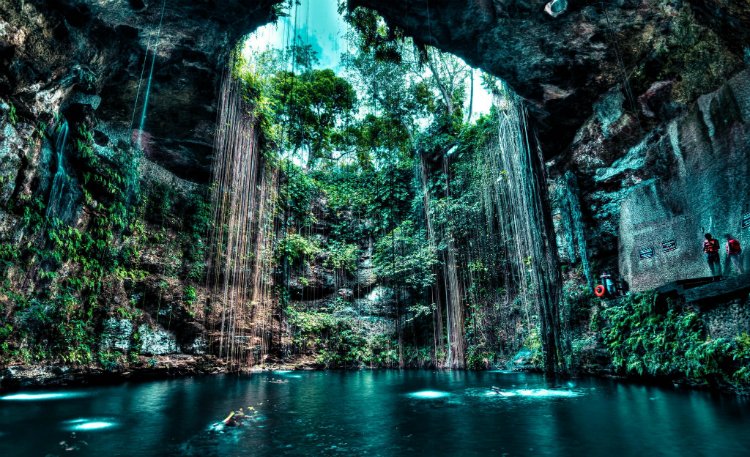 Then there’s the cenotes. Huge limestone sinkholes across the peninsula that create deep, sun-dappled pools of crystal clear, azure water. Oh, and what’s that underneath it? Just an elaborate, naturally formed underground cave network linking groups of cenotes together. Snorkel, swim, or just bask in the glorious beauty of it all.

Alas, the only drawback to Tulum – you’re going to be spoilt for choice. For one, the street food and hole-in-the-wall taquerias are incredible – Antojitos la Chiapaneca and Taqueria Honorio both serve some of the best tacos you will ever eat, for less than the price of your morning coffee. 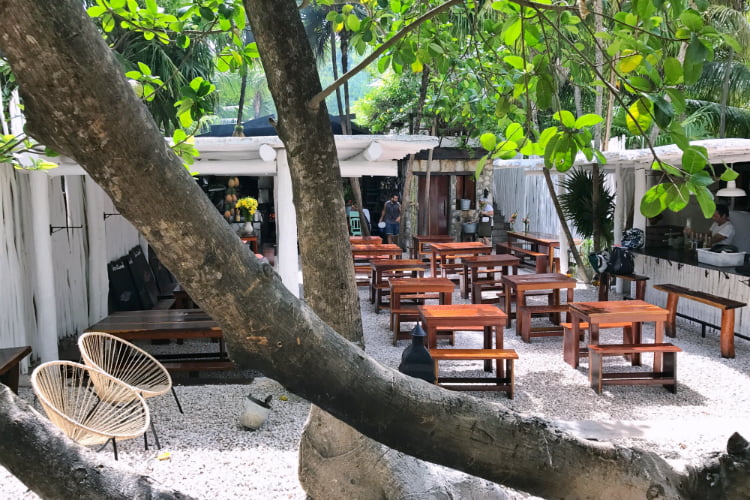 Given the area’s eco-friendly character; the food follows suit – most meals are cooked using wood-burning fires and simple processes, with many restaurants powered (if at all) by solar panels. One such place is the American-owned Hartwood, renowned for its impressive fine dining; as well as seafood spot El Camello, where plates are piled high with the freshest Caribbean catch. And for something completely different, hoover up the Thai-Mexican fusion at Mezzanine, a palm-shaded, beachfront hotel.

When done right, big nights out in Mexico don’t have tequila. In fact, you can pace yourself at laidback joints like La Eufemia, a beachside taco and cocktail spot that will help you avoid pricey sun-lounger rental further down, or Pasito Tun Tun – a fairy-lit cocktail garden that transforms into a dancefloor later in the evening. 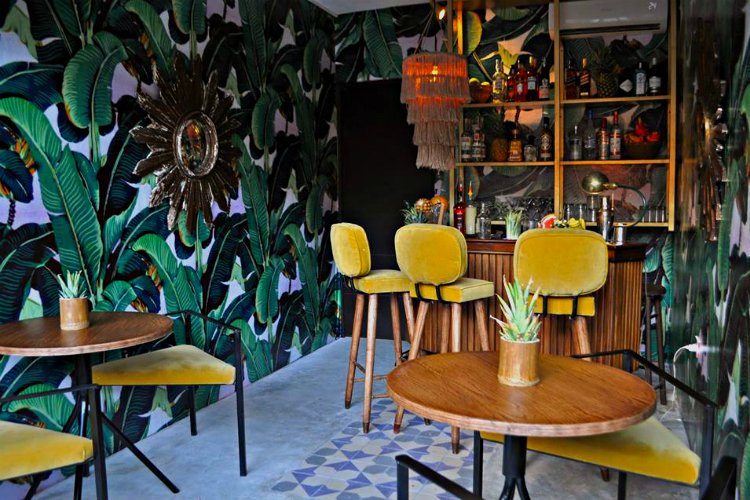 If you’re after somewhere a little more upscale, try the recently opened Mercado Candelaria; a gorgeous patchwork of tiled flooring, retro furnishings and botanical wallpaper that’s home to independent food stalls and a solid cocktail offering. Nearer the beach, you can sip smokey cocktails at Gitano Mezcaleria, a festoon-lit, palm-fringed clearing in the jungle, just down the road from the equally atmospheric Casa Jaguar. Their menu includes a mezcal and avocado concoction topped with dried crickets, but they’ll also serve bespoke cocktails matched to your own ‘energy’.

So when they explain the concept, just don’t give them a sour look.

PS Like sussing out the best spots on holiday? Check out our Barcelona City Guide