…we’re not just suite talking you.

Set over 23 floors, The William Vale stands head and shoulders above the rest of the Williamsburg skyline, scoring you the best views in the entire area – something that hasn’t escaped the architects, Albo Liberis. The futuristic design gives the hotel the appearance of being raised on stilts – the lobby and restaurant are on the lower floors, while the bedrooms begin several storeys up, meaning that every single one has a stunning view…and a private balcony from which to see it.

Immaculately presented, beautifully styled and with staff that anticipate your every need, it’s a true gem in New York’s most rapidly up-and-coming neighbourhood. Here’s the low-down.
– 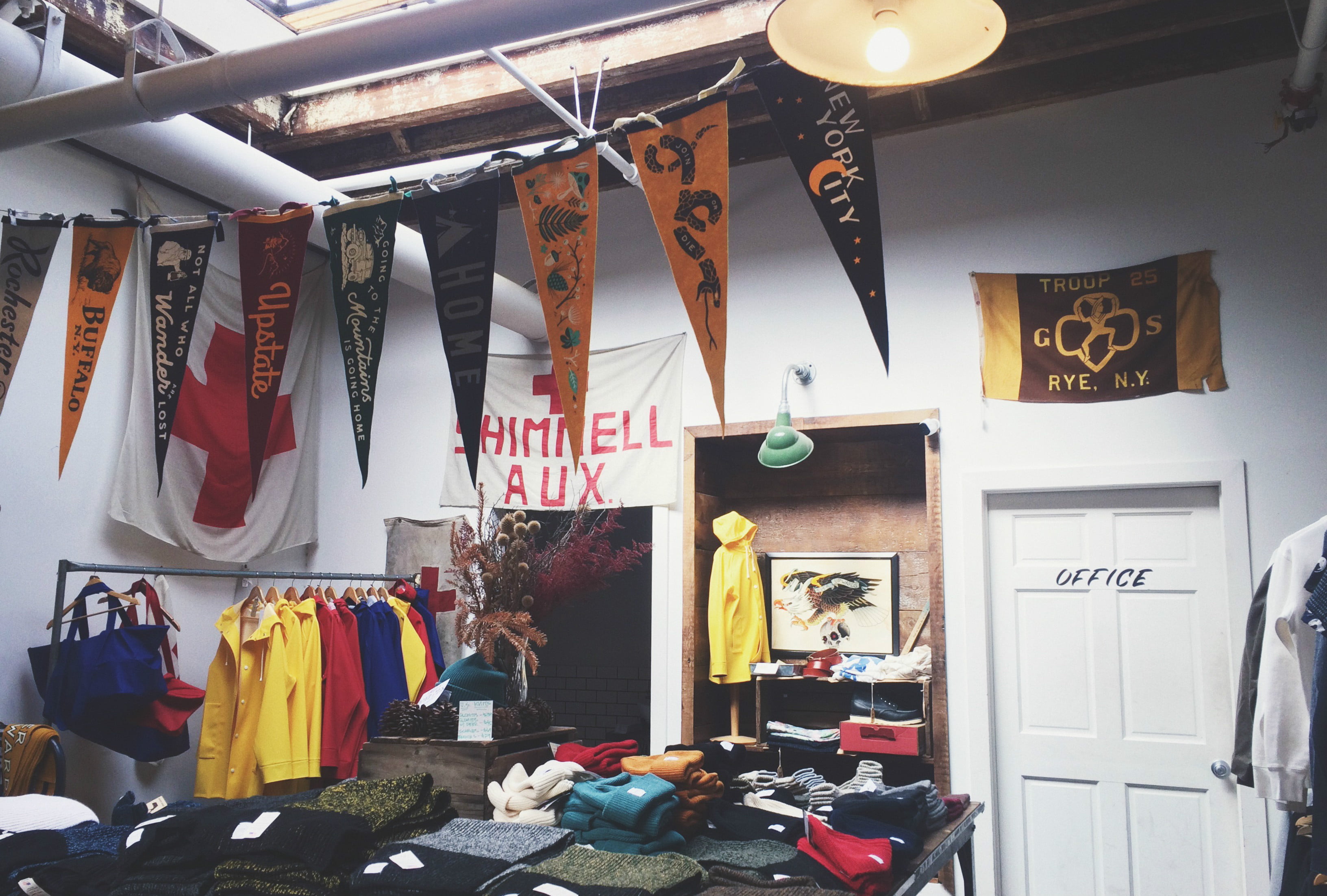 Hipster-heavy Williamsburg is often compared to Shoreditch. A former hive of industrial and merchant activity, its position on the waterfront meant that it was historically home to warehouses, docks and factories, while all the fun happened over in Manhattan. But over the last decade, that’s begun to change completely – and The William Vale is bang in the centre of this brave new world. Aside from the striking views of the Manhattan skyline (it’s probably the best way to actually see the city), there’s plenty to keep you occupied at ground level. Whether you head further north into Greenpoint, or south towards Bedford Avenue (a long shopping thoroughfare crammed with interesting, independent stores), there’s a staggering amount of coffee shops (try Upstate Stock), charmingly retro delis (Frankel’s), vintage thrift stores, stationers and jewellery boutiques to explore (Catbird even weld ‘forever’ bracelets onto your wrist on-site).

The Brooklyn Brewery is ten paces away from the hotel and runs free tours every weekend as well as weekday evenings, with live music, games, and plenty of beer. And don’t skip the City Reliquary, a community museum crammed with eclectic New York ephemera. Started by a firefighter who salvaged items and pieces of architecture from the buildings he visited, it’s since grown to house collections from New Yorkers of all ages and backgrounds, from an iconic news stand manned by an enthusiastic Bruce Lee portrait artist, to collections of vintage confetti. Essentially, there’s enough in Williamsburg to keep you occupied for a month – but you’re also just half an hour’s subway from central Manhattan.
– 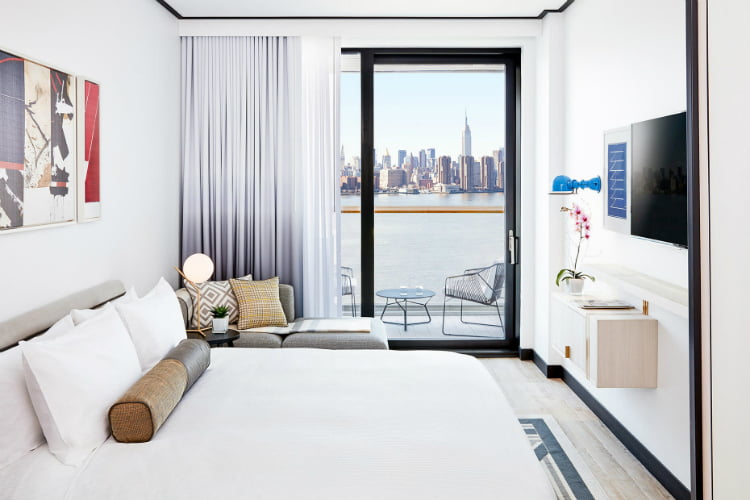 Where to begin. The big selling point, of course, is that every room has a furnished balcony and – if not a view directly onto Manhattan – sweeping vistas over the rest of Brooklyn, right up to the horizon. If you’re indulging, the corner suites are the ones to go for, with balconies stretching around two sides of the building, sun loungers, and floor-to-ceiling windows by the bathtub – or, of course, there’s the duplex penthouse, with a sprawling patio dining table and jacuzzi. Every room, however, is kitted out to feel insanely luxurious – there’s rainfall showers with L’Occitane toiletries; TVs that greet you by name and easily link to your own devices for music and video; sumptuously comfortable beds (and a pillow menu, should it feel like anything less than pure nirvana in there); a tablet for 24-hour room service, local recommendations, internet access and more; and a minibar stocked with high-end snacks, aged whiskies and cocktails. And if there’s anything you could possibly need beyond that, staff are easily contactable via the tablet.
– 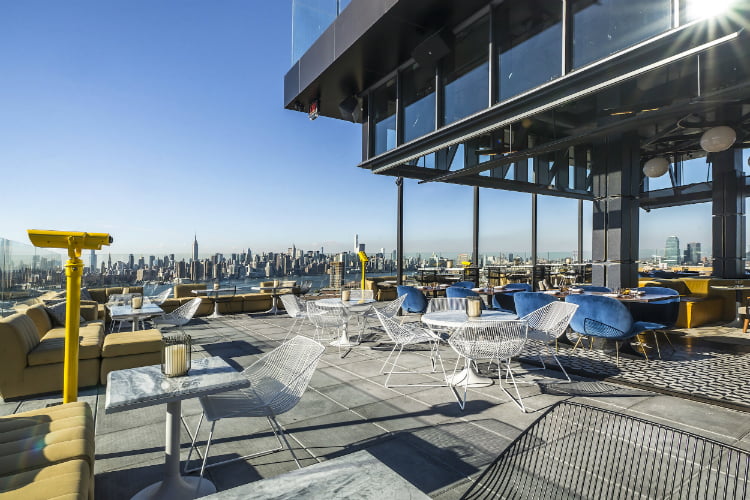 On the ground floor of the hotel is Italian restaurant Leuca, overseen by award-winning chef Andrew Carmellini. Attractively fitted with wood-panelled walls, mosaic tiled flooring, and a sleekly curving marble bar, Leuca has lines going out the door most nights. So if you don’t manage to swing by for a Southern Italian feast in the evening, head there for waffles, pancakes and baked eggs in the morning – washed down with a balsamic Aperol spritz.

Which brings us to The William Vale’s other gem – Westlight, the cocktail bar perched on the 22nd floor (which, unsurprisingly, also attracts queues on a sunny weekend). When booking a room, you can plump to add some credit here, which will score you the best seats in the bar and a tab to spend on cocktails like the Spaghetti Western (with mesquite smoked single malt, Campari, Amaro and hopped grapefruit bitters) and snacks like the baby back ribs, duck carnitas tacos and tempura bass buns.

Venturing beyond the hotel walls, there’s a number of local spots worth checking out, too. Right opposite the hotel’s entrance is Du’s Donuts, run by lauded molecular gastronomist Wylie Dufresne, and home to some unbelievably tasty toppings. Sauvage serves French-accented American grub all day, while Bernie’s serves elevated comfort food with a Manhattan that’ll knock you ’till Tuesday. Further afield, Joe’s is seen by many as the home of New York’s best pizza, while Maison Premiere is unbeatable for fresh oysters, brunch with a twist – or just pitch-perfect cocktails in the romantic, turn-of-the-century New Orleans-inspired surroundings.
– 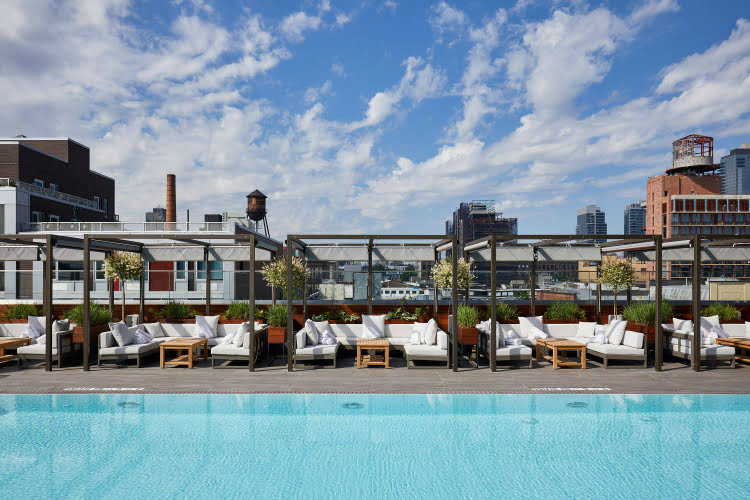 If it’s not yet abundantly clear, The William Vale is a spot for completely unwinding. So naturally, there’s a 60ft outdoor pool (open during the summer months), with daybeds, cabanas, cocktails, snacks from Leuca, and even a stall for poolside reads, curated by iconic booksellers, McNally Jackson. Also on this level is an elevated park, with garden games, greenery and a burger stand in a converted vintage airstream caravan.

Which means you’ll have plenty on your plate.

NOTE: Rooms at The William Vale start at £265 per night. You can find out more and book on their website HERE.

Planning a trip to New York? Check out our ideas for 100 Things To Do in New York