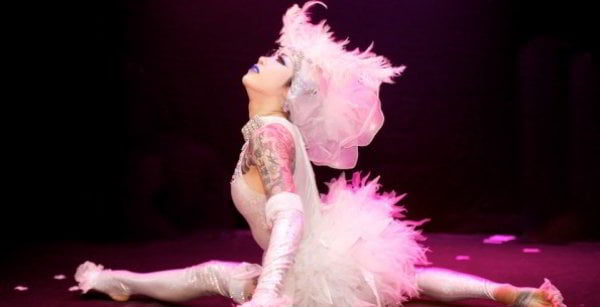 Apparently the comfort zone is a muscle you can stretch.

Which you should probably try to do, because you’re physically and psychologically primed to follow set behavioural patterns. The majority of thoughts you have today will be the same as the thoughts you had yesterday; you’ll be eating the same things; going to the same places; talking with the same people; setting the same goals, giving up on them, and then setting them again in exactly the same way.

All of which would make for rather depressing news, if it weren’t for the existence of an escape hatch that leads straight out of your self-imposed Groundhog Day: Eleanor Roosevelt’s advice to “do one thing everyday that scares you.”

And what could be scarier than attending Torture Garden?

Nothing. But that would be too scary, even for Eleanor Roosevelt.

However on 21st September 2013 Torture Garden will be leaving their gimp masks at home in order to bridge the gap between mainstream and niche with Bourne & Hollingsworth, at The Dark Circus Party.

Best think of this as a sort of bohemian carnival of curiosities: a debaucherous, surreal and subversive night of costumes, masks, cocktails and risqué entertainment that will mischievously stretch your comfort zone… without actually breaking it. Described as “a dark, dreamy and slightly depraved world of heady illusion and unbridled spectacle”, it’s an evening (hosted at The Bloomsbury Ballroom) of dancing, pleasure seeking and entertainment like Chrisalys’ one-man freakshow; Lucky Franco’s Broken Doll Contortion; Laurie Hagens award-winning Reverse Striptease; experimental performances from four headed vaudeville act The Late Night Shop Cabaret; and Ariel Acrobats mingling with the creatures of the underworld.

All of which is guaranteed to expand your horizons. However the real opportunity to push the limits of your personal comfort zone lies in the dress code…

NOTE: Tickets For The Dark Circus Party, on 21st September 2013, are now on sale HERE
Enjoy alternative entertainment experiences? Check out our guide to the best of what’s on in London