And New York’s world-class dining scene does not disappoint, so here’s the cream of that very bountiful restaurant crop… 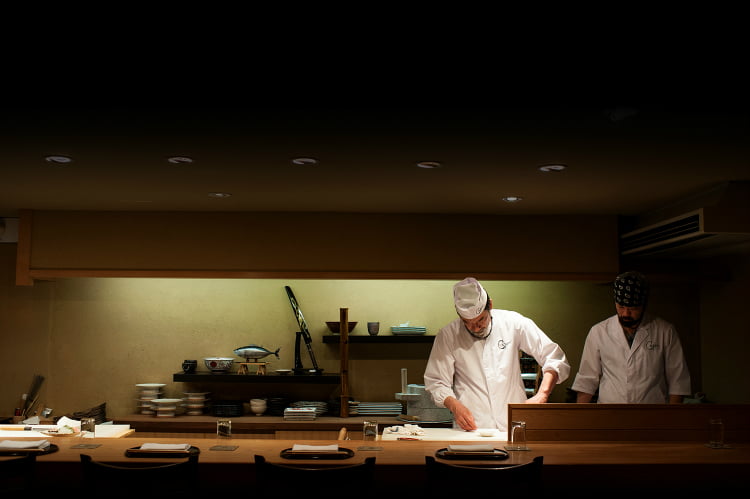 Cagen, we’re told, means ‘just right’. And owner/chef Toshio Tomita brings his nigh-on-20 years of experience at Nobu to bear at Cagen, making sure that everything from their stunning sushi, to their slushy nama genshu sake, to their beautifully minimalistic decor is indeed just right. Head down and get the omakase. The fish is flown in from Japan daily. You won’t regret it. FIND OUT MORE 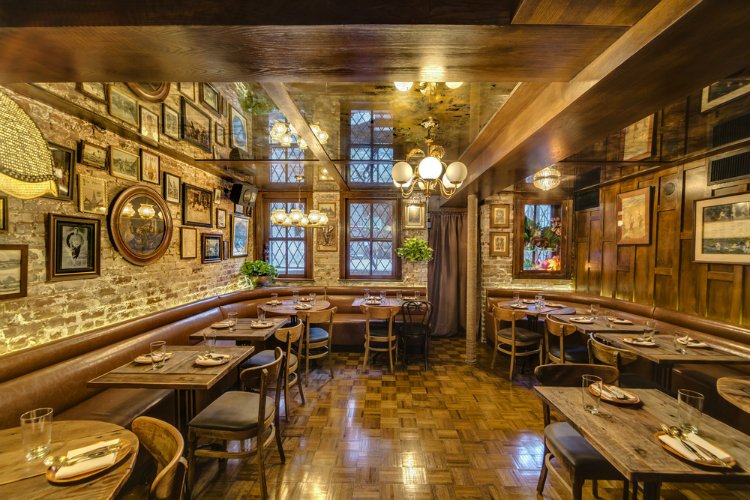 Uncle Boon’s feels a bit like a treehouse. Except it’s underground. A beautiful mix of wood, greenery, bare brick, and leather, it serves some of the city’s best Thai cuisine – drink delicious cocktails (like the Jasmine tea bourbon/lemongrass Bolan) between bites of fiery food (like the  Massaman Neuh curry, with boneless beef ribs). FIND OUT MORE 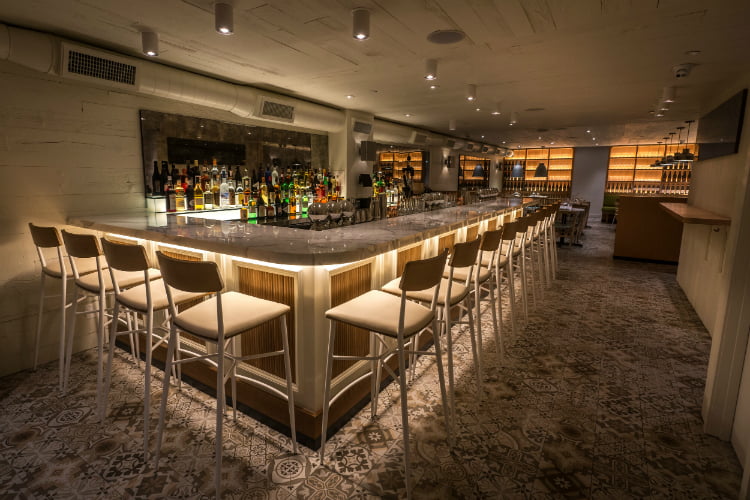 Opening his first restaurant outside of Israel, uber-chef Meir Adoni has now shown the residents of New York just why he’s the hottest chef in his native country. The menu here consists of Middle-Eastern eats like Damascus Qatayef  (a crispy Syrian pancake filled with spiced lamb and herb yoghurt), and Palestinian Tartar, with beef, smoked aubergine, and baby artichokes. FIND OUT MORE 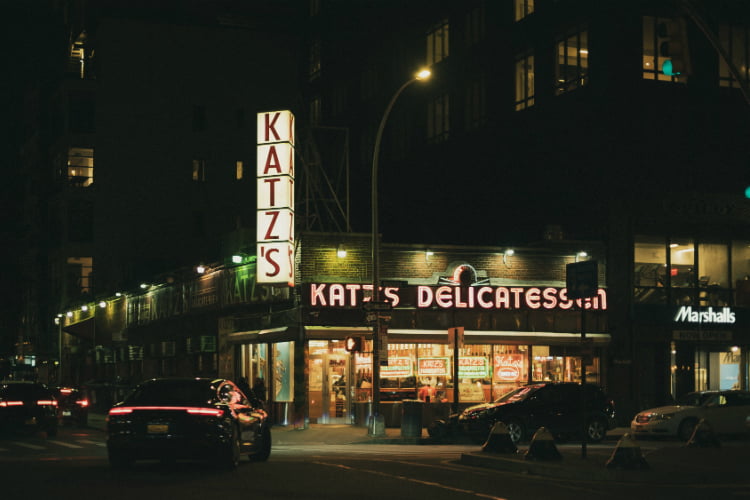 Yes, Katz’s deli was made famous by the fake orgasm scene in When Harry Met Sally. No, it’s not just a random deli that got lucky by being immortalized in film. Yes, it was actually a well-respected deli (dating back to 1888) for years before that film, making some of the finest pastrami in the city. And yes, the staff love it when you recreate that scene. Trust us. FIND OUT MORE 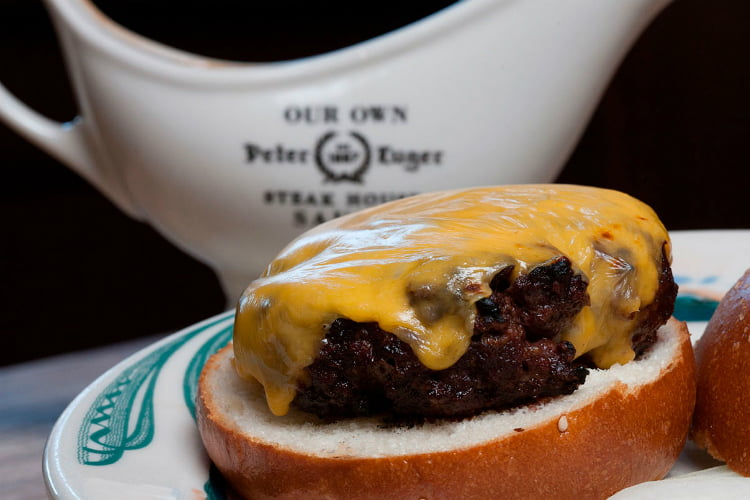 Luger’s has been around for a looong time (it first opened in 1887), and at a certain point it became famous for simply being famous. But the cut-throat competition for restaurants in New York is ruthless, and if it wasn’t one of the best steakhouses in the city, it wouldn’t be busy every night. But it is, because it is. FIND OUT MORE
– 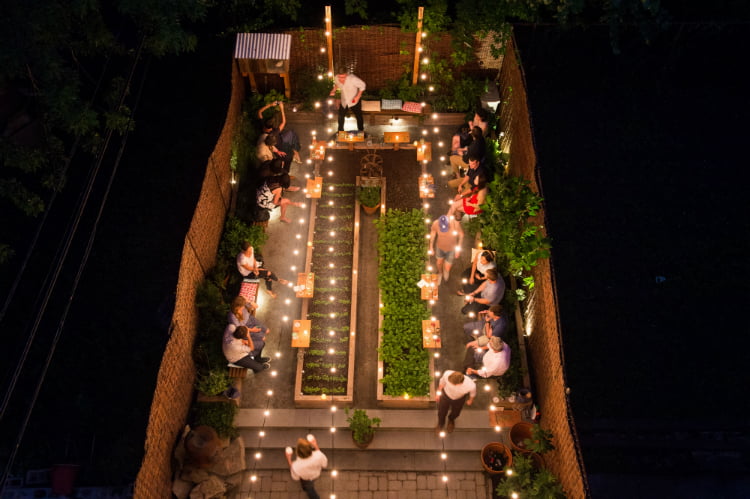 Olmsted offers a seasonal, ingredient-driven menu with a lot of their produce coming from their very own backyard garden. And while the food is fancy (carrot crepe with Little Neck clams and sunflower, for example) they are not – they offer world class food in a laid-back environment. FIND OUT MORE 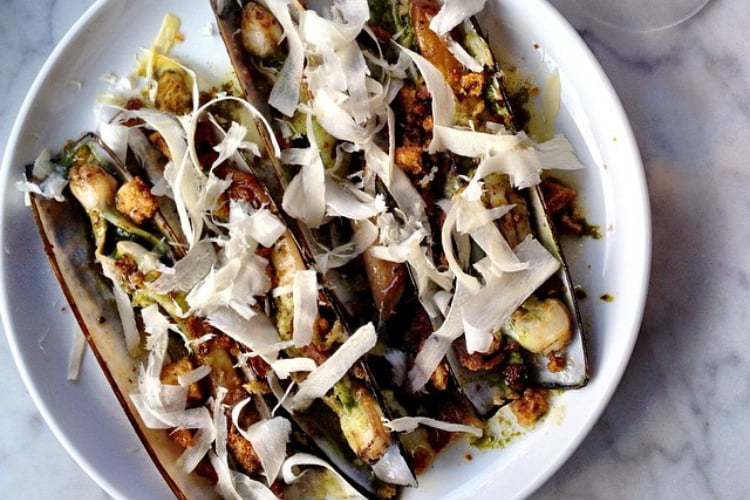 This old music venue, now housing Estela, is both intimate and lively. It is renowned for serving up some of the best food in New York, so much so that even Obama has paid Estela a visit. The food is an imaginative inspiration of Mediterranean cuisine with a New York twist – from Chinatown to Williamsburg. Dishes range from grilled cuttlefish with daikon radish, to pork with burnt cucumbers and leeks, and there’s a lush selection of wines by the glass to go with it all. FIND OUT MORE 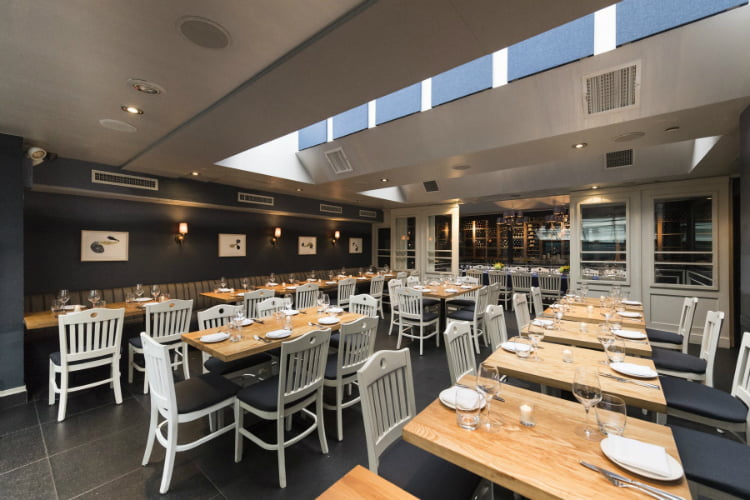 L’Artusi is set over two floors and, more importantly, has a cheese bar. They also have a chef’s counter that overlooks the open kitchen, where chefs can be seen cooking up some of the finest Italian dishes in New York, including their roasted mushrooms with pancetta, fried egg, chilies and ricotta salata and their Bucatini with pancetta, tomato, chilies and pecorino. FIND OUT MORE 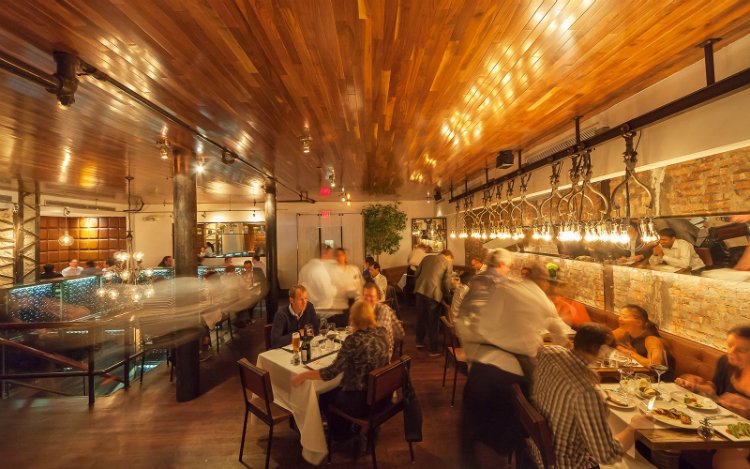 With its high-industrial decor, and to-the-point name, QM is designed very deliberately to feel like a New York butchers shop. And the food is, well, quality meats. They’re famous for their dino-sized aged rib steak, melt-in-the-mouth charcuterie, and homemade ice cream. FIND OUT MORE 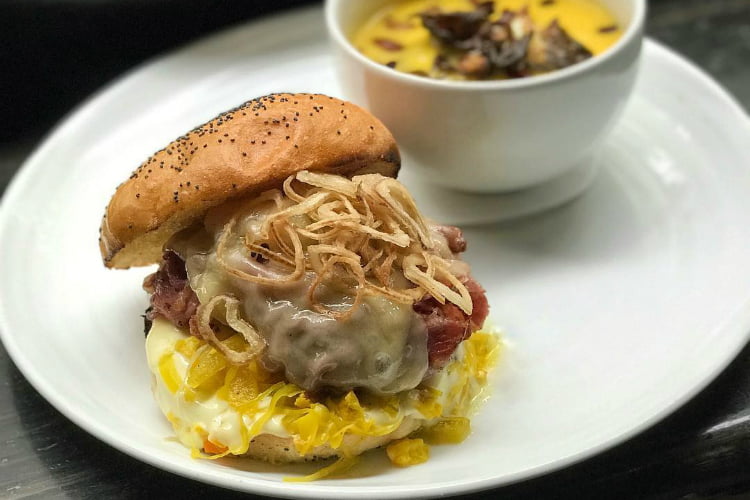 Owned by restaurant emperor Danny Meyer, many think that Gramercy Tavern is the apogee of his dish-dealing talents. Everything from the detail-oriented design, to the fiercely seasonal menus (there are two – one for the casual Tavern area, and one for the more formal Dining Room), to the seemingly faultless service seems to be honed to perfection. Which isn’t surprising, given that they’ve had two decades to get it right. FIND OUT MORE 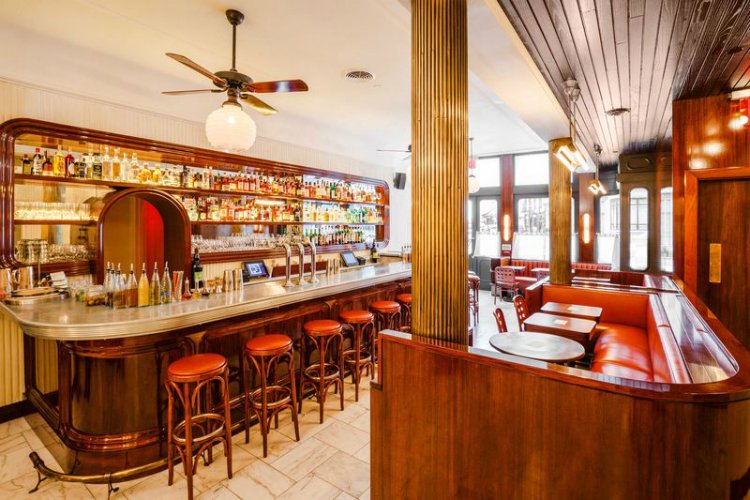 Bathed in a rosy glow, Frenchette carries some of the quintessential Parisian flair of Balthazar (where its founders, Lee Hanson and Riad Nasr, were opening head chefs), mixed in with the kind of painstaking, surprisingly attention-demanding dishes you’d find at a fine dining spot. Not that you’d necessarily realise – the menu reads like a greatest hits list of brasserie-style comfort food – but the proof of the chefs’ diligence and skill is (literally) in the pudding. FIND OUT MORE

We’re not saying Joe’s Pizza is the best in the city. That title is too hotly contended to slap absolutes on. But on the right day, you won’t find better. It’s been in the West Village since the mid-’70s, and was started by a Neapolitan immigrant named, astoundingly, Joe. The menu is simple, the pizza is unpretentious, and the prices are cheap. FIND OUT MORE
–

Beauty and Essex | Lower East Side

B&E doesn’t get a huge amount of passing trade. Mostly because, if you wander into the building with the Beauty & Essex sign at the address listed, you’ll find a pawn shop filled with everything pawn shops sell. Which makes it all the more impressive when you find your way behind the hidden door, into the huge, ultra-glamorous, chandelier-lit restaurant. The food is high-American (double-cut lamb chops with port glaze, etc.), and the vibe is devastatingly cool. FIND OUT MORE
– 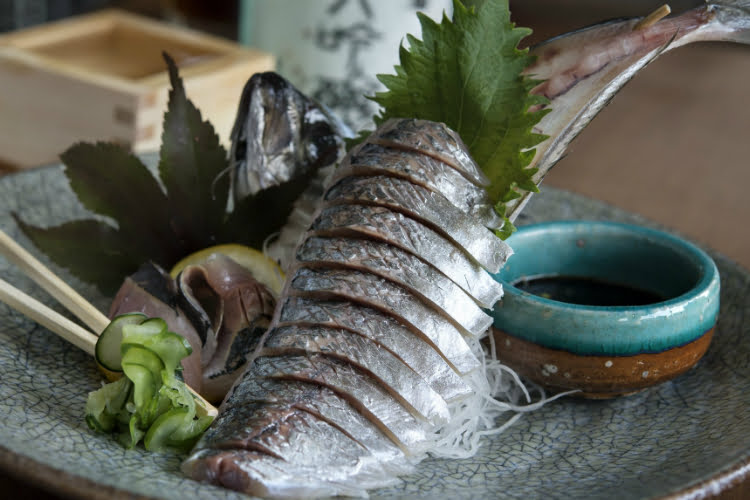 The Blue Ribbon group have quite a few eateries under their belt (over half a dozen restaurants in New York alone), all specialising in different culinary styles, from fried chicken, to bars, to brasseries. But their original sushi joint is the jewel in their highly polished crown. It’s been jammed with customers since it opened a decade ago, and for good reason. The fish is ultra-fresh, the service is faultless, and the sushi is prepped by experiences, talented, creative chefs. If you can get a table, dive right in. FIND OUT MORE 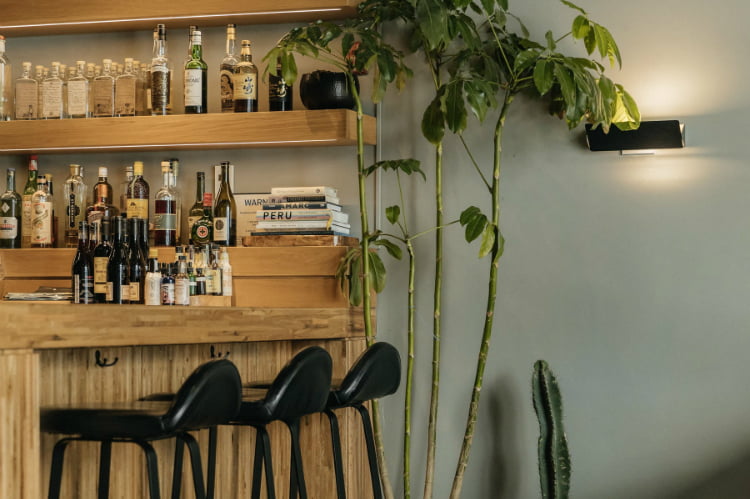 Enrique Olvera owns several restaurants in Mexico (including Pujol, the 13th best restaurant in the world, apparently), so when he finally opened up a place in NYC it was kind of a big deal. And it looks like he got it just right – it’s now taken Pujol’s former position at no. 25, and co-founder Daniela Soto-Innes has just scooped the (admittedly contentious) title of World’s Best Female Chef. The food is authentically Mexican (naturally), but made with local ingredients, and with a little local flair. Guac comes loaded with herbs. Local celebrity vegetable ramps feature strongly. Lobsters from the bay make an appearance. And it’s all delicious. FIND OUT MORE 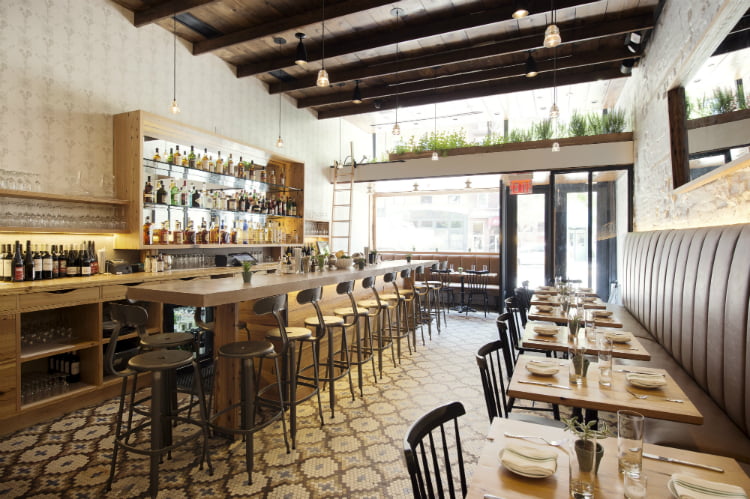 Meadowsweet is one of the best exemplars of New American cooking, in which the farm-to-table ethos is brought to a beautiful head thanks to rustic wooden fittings, a hyper-seasonal menu, and an actual herb garden hanging next to the bar, the bounty of which goes into the cocktails served below. Before the head chef Polo Dobkin took it over, the space itself was formerly occupied by another restaurant… where Dobkin worked, and won a Michelin Star. And now, Meadowsweet’s been granted the same honour. Which is pretty sweet. FIND OUT MORE 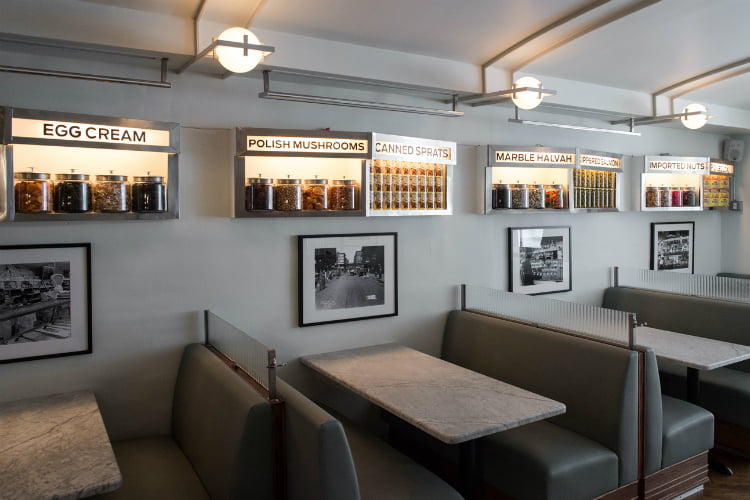 The Russ & Daughters business plan: 1) Open a shop in downtown Manhattan selling herring, lox (smoked salmon), bagels, and other classic Jewish Deli foods. 2) Wait 100 years, making sure that your reputation for quality isn’t compromised by handing control of the business down through four generations of your family. 3) Open a cafe down the street. FIND OUT MORE 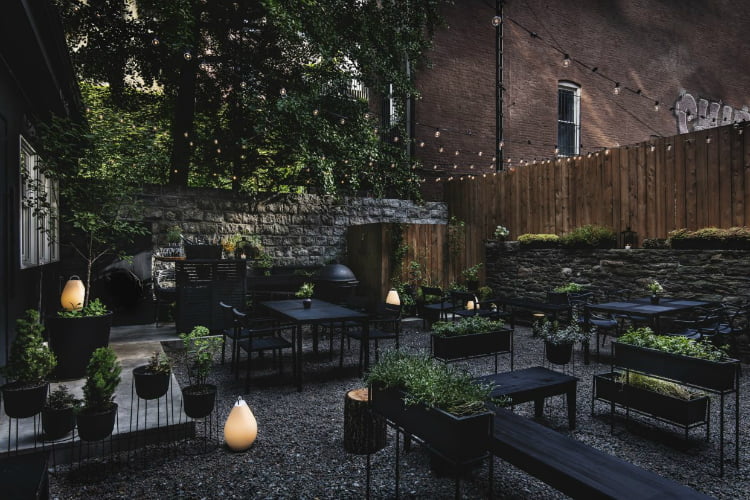 Aska might well be where the restaurants in New York hit peak hipster. It’s set in a restored 1860s warehouse at the edge of the Williamsburg Bridge, run by an achingly cool, young Swedish chef, and only serves tasting menus, to just ten tables per night. And none of those are a bad thing. Because the end result is an extraordinarily creative and nice meal in a beautiful space, with stellar service, and an intimate atmosphere. FIND OUT MORE 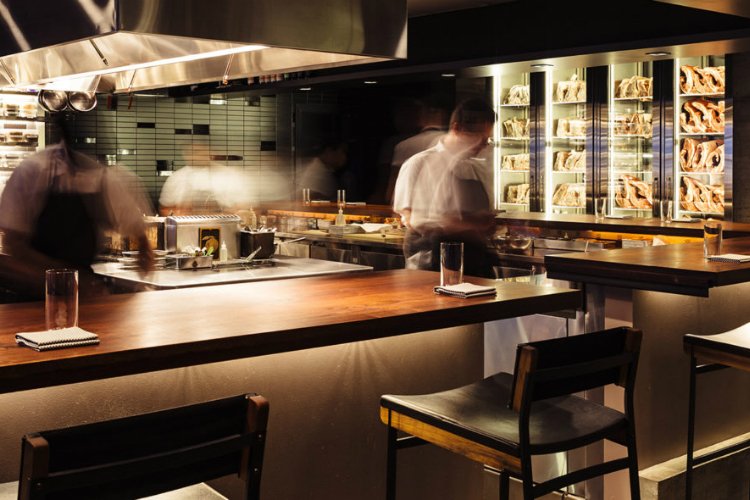 Ugly Delicious‘ David Chang owns dozens of acclaimed restaurants across 4 cities. But only one of them has two Michelin Stars (and has kept them for a decade). It’s Momofuku Ko, and it has only 12 seats. Getting a reservation requires patience, bribery, and black magic, but it’s worth it. You’ll get flakes of frozen foie gras shaved onto pine nut brittle & riesling jelly. Smoked lobster tail with warm nectarine. One-bite mille-feuille with crisp layers of rye pastry sprinkled with green tea powder and trout roe. Or, just whatever’s fresh that day. FIND OUT MORE 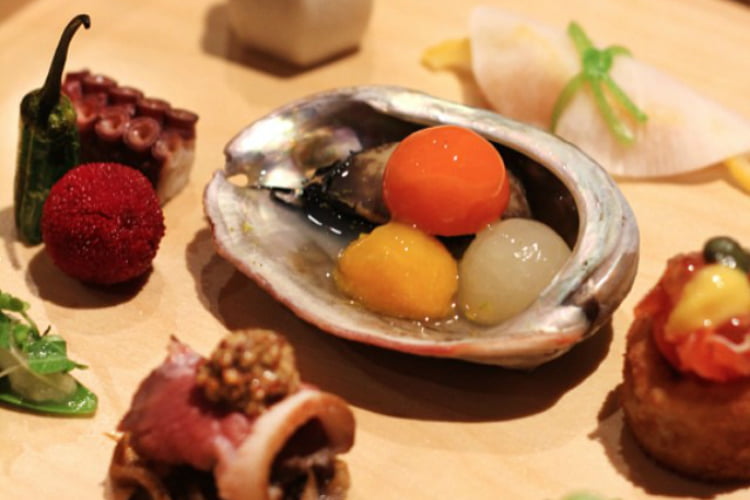 Set in a slick underground space, Kyo Ya is one of the few Japanese restaurants in New York not to specialise in sushi, instead devoting its menu to kaiseki; the Japanese style of haute cuisine. The dinners are composed of multiple courses of intricate, finely tuned dishes made using extreme skill. In fact, if you want a kaiseki dinner, you’ll need to order a day in advance. And you certainly won’t regret it. FIND OUT MORE 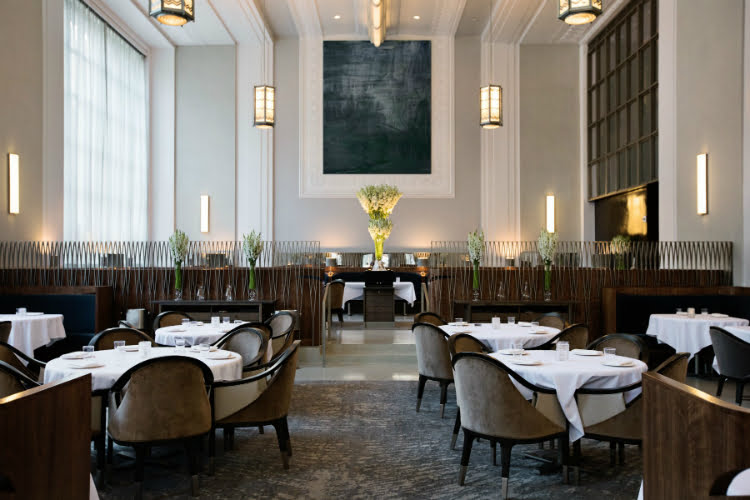 Eleven Madison Park has won literally every award a restaurant aspires to win. It’s got three Michelin Stars, it’s been ranked no.1 on the list of the World’s 50 Best Restaurants, and it’s had more outstanding reviews than can reasonably be counted. Classic dishes like the lavender-roasted duck, and the celery root cooked in pigs bladder are bewilderingly good. FIND OUT MORE 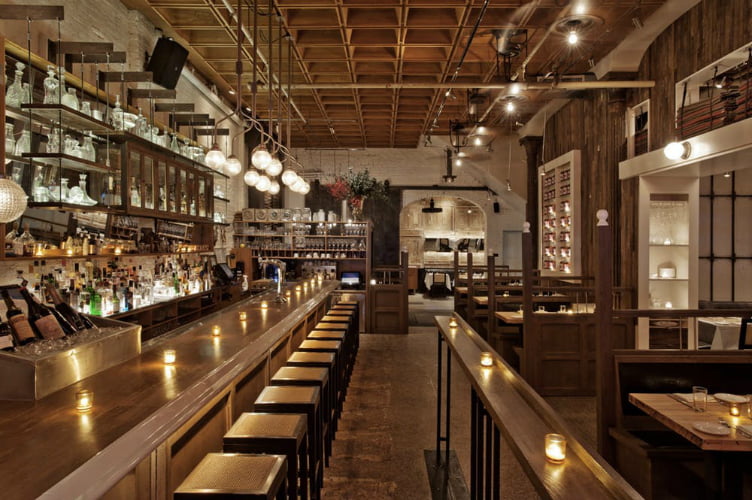 Named after a pair of racehorses, S+P takes its culinary inspiration from anywhere on the globe it pleases. You’ll find seafood towers with tea-smoked mussels; spiced Long Island duck with chimichurri; tuna tartare with yuzu; and bone-in NY strip steaks, all served in a rather beautiful, old fashioned wood + leather-bound space. And downstairs you’ll find The Poni Room – an ‘American izakaya’ serving skewer food in the wine cellar. FIND OUT MORE 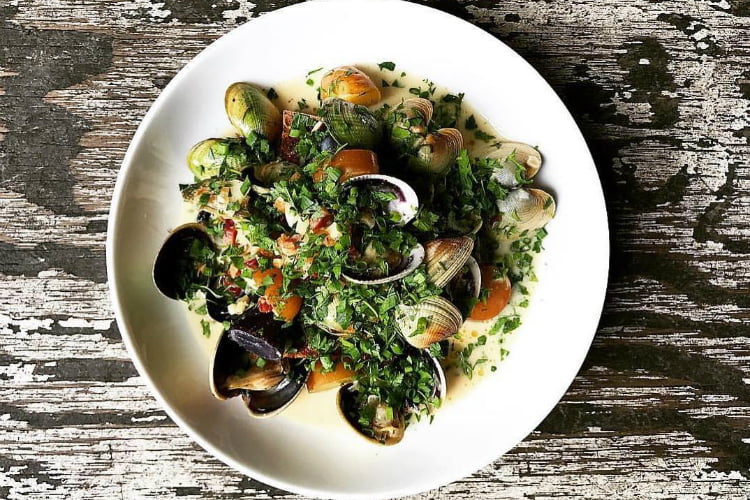 Opened by a member of LCD Soundsystem, the spectre of famine is certainly not going a part of these Four Horsemen. The place is first and foremost wine-driven, with the vino list informing the menu, and resulting in options like smoked ribs with plum glaze; Wagyu chuck steak with charred pickles; and a selection of very interesting charcuterie. FIND OUT MORE 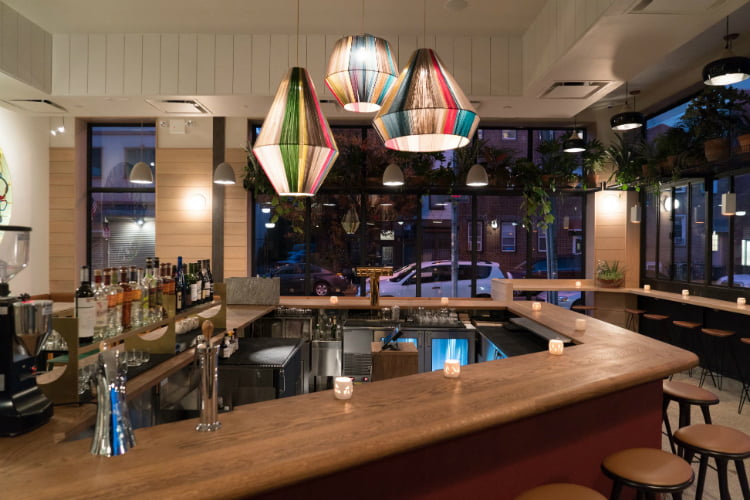 Peruvian food is hot these days, and it’s tough to find a place outside of Peru that serves it as well as Michelin Bib Gourmand-toting Llama Inn. It’s a bright, airy space, and they’re slinging authentic dishes like chicken thighs with fermented soy bean; pork belly with pickled chillis; and charred octopus ceviche with avocado, all to be washed down with cocktails, global beers, and a lengthy list of teas. FIND OUT MORE 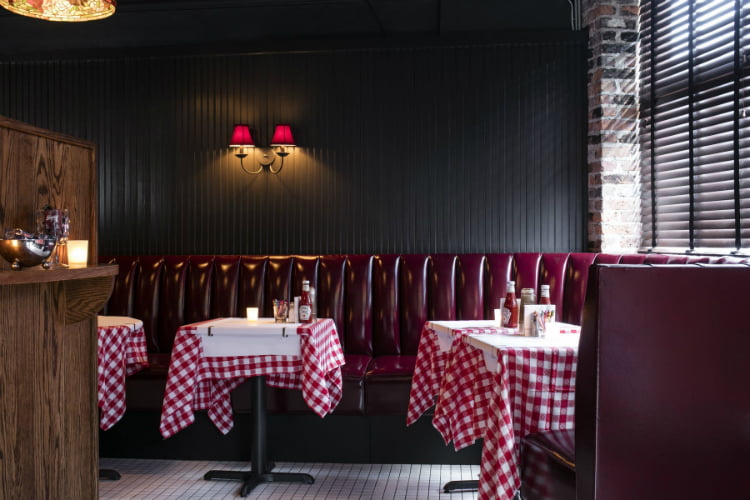 A convivial, closely packed diner with patent leather booths; chequered tablecloths; and an all-American menu. They stick to classic comfort food here, and they do it extremely well. A knockout Manhattan and a surprisingly flavoursome wedge salad (chopped iceberg lettuce, bacon and blue cheese dressing) set the scene for a lively evening chatting over cheeseburgers, chicken paillard and other daily specials. FIND OUT MORE

Liked exploring the best restaurants in New York? Then head on over to some of NYC’s greatest bars…