There are a great many beautiful, palatial houses in Kensington that are filled with priceless works of art.

The only problem is that they belong to people you don’t know.

So next time you find yourself wandering the grandiose avenues of Holland Park and eager to indulge your penchant for fine art and neoclassical architecture, you should put your crowbar down and head to the neighbourhood’s eclectic and impressive Victorian palace of art.

Leighton House – home to a dazzling collection of paintings and sculpture; dozens of handcrafted treasures gathered on travels around the world; and precisely one stuffed peacock – was recently restored to its original glory, and is now open six days a week.

It was originally the home of the artist, collector and aesthete Frederic, Lord Leighton. Keen to promote the idea that painting could be seen as a respectable, gentlemanly profession, he commissioned a house full of sumptuous furnishings, exotic materials and grand architectural elements.

And a fountain full of fish. 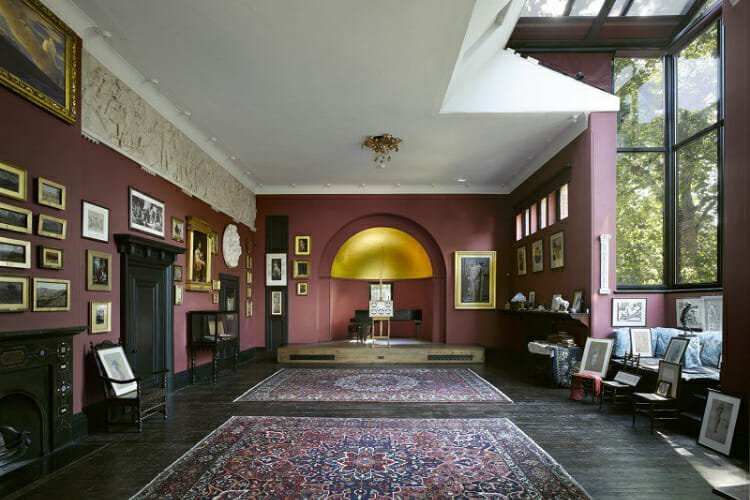 Most striking is the ground floor, divided up into stunning Arabian-inspired anterooms with carved columns, gilded domes and 14th century tiles collected from his travels throughout the Middle East. Upstairs is a huge, skylit gallery and studio where models would pose for hours on end as he painted (you can even see the separate models’ staircase they used).

Throughout the house, you’ll see dozens of paintings, including works by his Pre-Raphaelite contemporaries Millais, Burne-Jones and G. F. Watts; sculptures, sketches and more. There’s over 80 of Leighton’s own pieces, including your favourite, Clytemnestra from the Battlements of Argos Watches for the Beacon Fires Which Are to Announce the Return of Agamemnon.

As well as the permanent collection, there’s often visiting exhibitions on show, as well as evening openings with live music and wine, and immersive recreations of 19th century bohemian artist soirées.

But don’t worry, you won’t be pulled up to be a life model.

NOTE: Leighton House Museum is closed for refurbishment – we’ll update this when it’s open again. You can find out more on their website HERE.