48 Hours In Barcelona | The Weekender

It was Cervantes’ Don Quixote who described Barcelona as “a fountain of courtesy, shelter of strangers, hospice to the poor, land of the valiant, avenger of the offended, reciprocator of firm friendship; a city unique in its location and beauty…”

And then, in one sadly lost version of the manuscript, “…best navigated with the aid of The Nudge’s most excellent guide to spending 48 hours in Barcelona, from enchanting tapas spots to grand cathedrals, majestically filled with geese“, which, some scholars suggest, was a prescient nod to this very article, walking you through the perfect weekend tour of the city’s highlights.

Including the goose cathedral.

After all, we’re not quacks.

PS You can explore all of our favourite restaurants, bars, hotels, and things to do in our full Barcelona City Guide 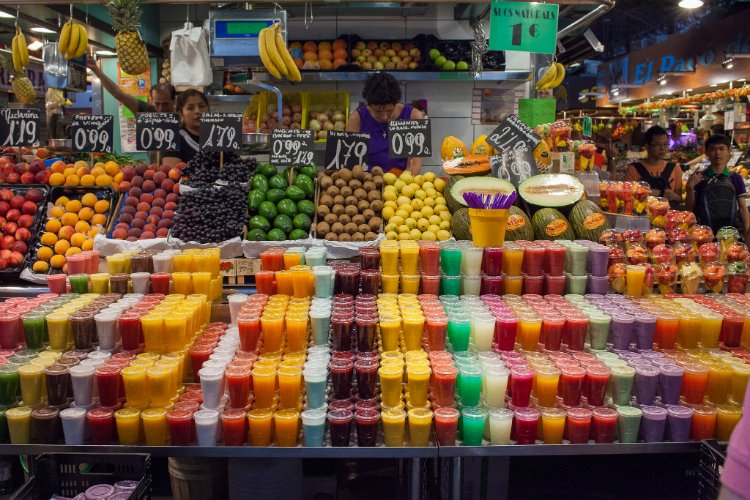 Get up bright and early, elbows at the ready, to hit Barcelona’s bustling covered market, La Boqueria. Essentially a Catalan (and so, unsurprisingly delicious) Borough Market, stalls are piled high with melt-in-the-mouth charcuterie, attractively packaged candied nuts and marzipan sweets, freshly pressed fruit juices, and top-shelf pantry ingredients. Get something to go and head out to La Rambla – the city’s most famous street, lined with craft stands and plane trees. It’s a pretty standard tourist thoroughfare (prepare for an onslaught of human statues) but picturesque nonetheless, and littered with independent cafés and boutiques to pop your head into – with several worth bringing your body into, too. At the bottom, towards Port Vell and the coast, is the towering column topped by a swarthy-looking Christopher Columbus. Look out for the stairs leading down at the base, and you’ll find an elevator that rises up inside the column to a little-known panoramic observation deck at the top.

Having gazed out over the beauty and majesty of the Mediterranean, you’ll probably want to follow it up by eating some of its contents. Head to La Paradeta a few streets away for some of the best value seafood in town – pick what you fancy, then pay for it by weight. The interiors aren’t anything special, but it’s a local favourite, for reasons that will become immediately obvious. 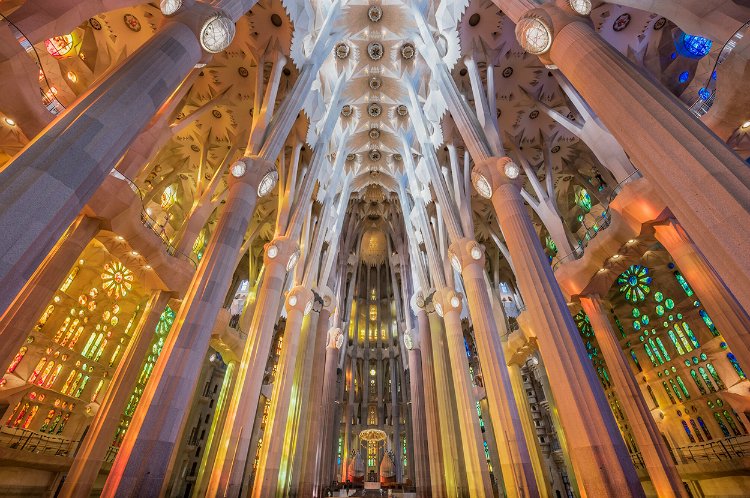 Right, we’ll get this one in early doors because you can’t leave without seeing it. It’s the Sagrada Familia, designed by renowned Catalan architectural genius Antoni Gaudí – who shunned conventional ‘architectural plans’ in favour of artistic 3D models. In a perhaps not unrelated twist of fate, construction began back in 1882, and was officially deemed half-built a couple of years ago. Happily they’ve got the key bits up (roof, floor, etc.) and it’s utterly jaw-dropping inside, with light streaming through kaleidoscopic stained glass windows, soaring pillars and an aesthetic that’s frankly mind-boggling for the 19th century. 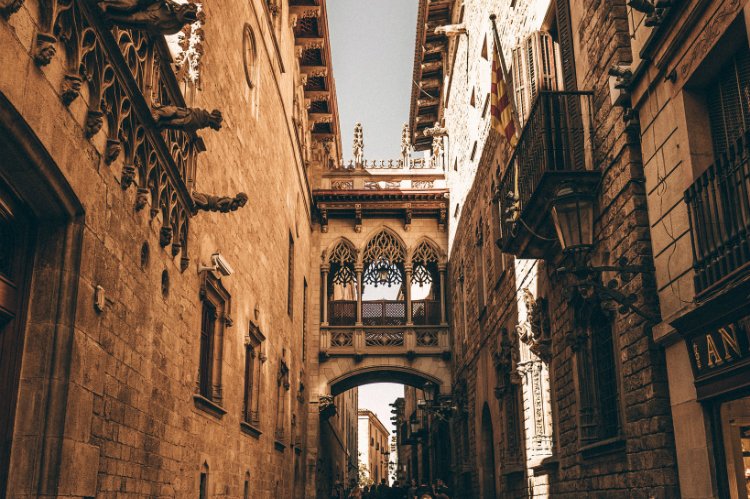 Continuing your historical tour of the city, have a wander through the grid-like, Modernist streets of Eixample towards the Gothic Quarter – a practically undisturbed chunk of Medieval Barcelona. Depending on the time of year, grab a hot chocolate from La Granja 1872 or flower-shaped ice cream from Gelarto Rosa, and explore the neighbourhood on foot. If you want a bit more direction, aim for the Picasso Museum, the Barcelona Cathedral (the cloister’s filled with geese, for reasons which may or may not be explained to you), or the Jardins de Rubió i Lluch, a cloistered secret garden set in the former hospital where Gaudí joined that great architectural studio in the sky.

While you’re in the old town, stop by the famous Els 4 Gats for a glass of wine and some of the best tapas in Barcelona. This brightly decorated restaurant and brewery, housed in one of the city’s gorgeous Modernist buildings, was opened in 1897 by Pere Romeu, inspired by Parisian cabaret bar, Le Chat Noir. Unlike every other student who’s ever hung the poster on their bedroom wall, he actually worked there, and brought its bohemian, laissez-faire atmosphere to Barcelona. He rarely charged for drinks, and it grew to become a hub for artists and free thinkers, even housing a 17 year old Picasso’s first exhibition before closing in 1903 due to financial difficulties. Nowadays, they do charge – but it’s worth it for the quality tapas and historic environs. 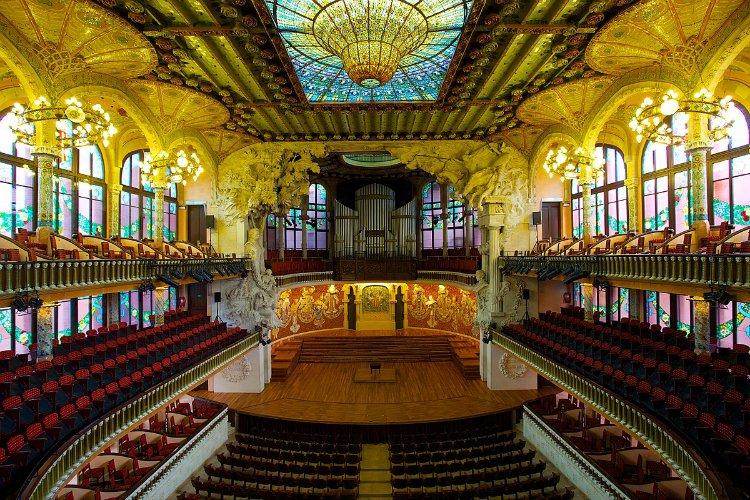 Back on the road, and it’s time to tick off a few more landmarks before the first 24 hours are through. Modernist houses Casa Batlló and Casa Milà both host (less crowded) evening openings, where you can toast the city with a glass of cava from the rooftops. Alternatively, head along to the Palau de la Música Català for a concert – the interiors are stunning and seats are less pricey than you think. Cap off your evening with a visit to one of the city’s many roof bars – the Grand Hotel Central has a great one by the rooftop pool that serves cocktails from 9pm till late.

Time to bed down in one of Barcelona’s excellent hotels, and get ready for…

Start your day as you do most days – with a nice strong vermouth. That’s the brunch drink of choice here ahead of mimosas or bloody maries – get yours inside vintage bookshop El Siglo by the Mercantic arts and crafts fair, where they’ll serenade your morning drinking with live jazz. Take some time to browse the stalls after, or if you’re based further south, check out the Palo Alto market in up-and-coming Poblenou. Grab a coffee from Nømad and start the pilgrimage to Park Güell, another colourful Gaudí creation boasting a museum set in his old house. For an outdoor pitstop, head to the Parc de la Creueta del Coll (it has a palm-lined lake you can swim in), or the Bunkers del Carmel, with views over the city. 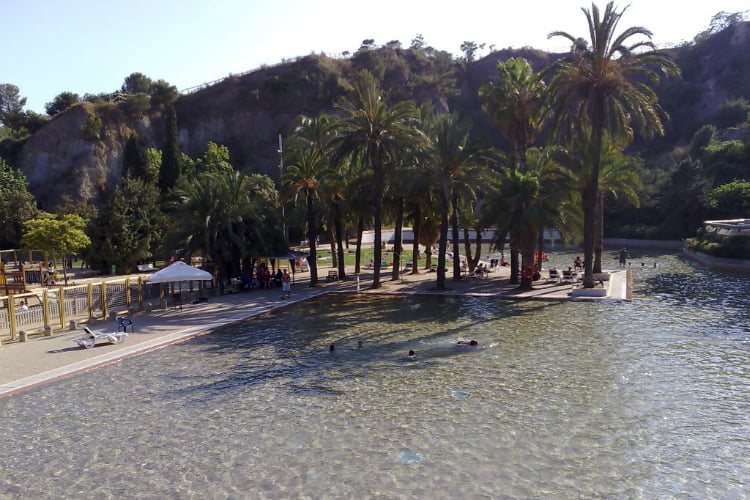 Stop off for some seafood paella at 7 Portes, before you hop in a cable car up Montjuïc to the Fundació Joan Miró to take in some modern art – they even have a mercury fountain designed by Alexander Calder. If you’ve got time, check out the huge Palau Nacional, filled with another excellent art collection, or the sprawling Montjuïc Cemetery – which also boasts Europe’s only museum dedicated to funeral carriages. As the sun sets, go in search of La Caseta del Migdia. It’s a (slightly elusive and late-opening) pop up bar popular with locals that looks over the city as it starts to light up, with live music on most nights. 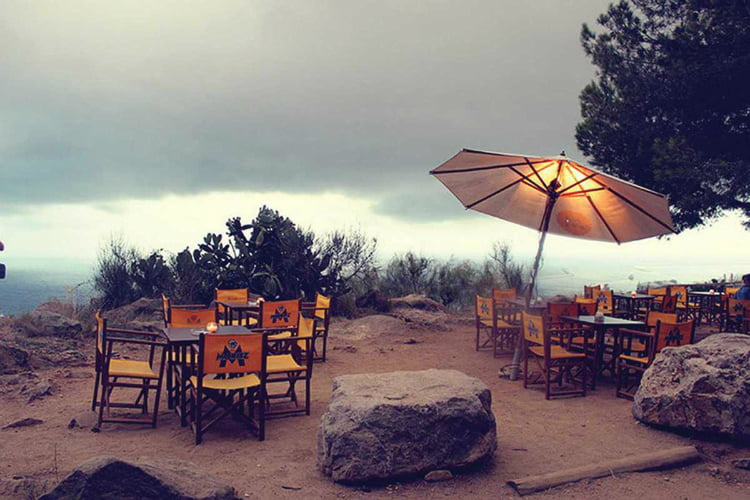 As night falls, stop off to watch the light show at the Magic Fountain before heading down to Quimet & Quimet, a minuscule but truly characterful, family-run tapas bar that serves some of the best dishes in the city. From there, you could take off to watch flamenco in the crumbling baroque palace, Palau Dalmases Espai Barroc, learn how to drink absinthe in Hemingway’s old haunt, La Marsella, or seek out El Paradiso, a cocktail bar serving up Nightjar-style creations in an ridiculously cool retro den hidden behind a fridge in a pastrami shop.

It’s a very good place to chill out.

PS | Staying a little longer than 48 hours? Read our guide to 100 Things To Do in Barcelona