The Best Bars In Barcelona

The Best Bars In Barcelona

Main image: Paradiso | Last Updated: 7th October 2019
–
There are a great many things to see in Barcelona.

But it’s often good to start at the beginning. Which in this case, is literally the ‘bar’.

See, drinking is woven into Catalan culture – and nowhere more strongly than Barcelona itself, whether it’s sipping a vermouth aperitivo on a corner of La Rambla, hailing jugs of sangria from passing waiters in beach-side tapas bars, or raising a glass of cava on a roof terrace above the spires and chimneys of the Gothic Quarter.

And there’s an appropriately grand offering of places to do just that, from traditional cava and tapas joints, to hidden speakeasies, gintónica temples, and old-school cocktail bars. Just make sure you don’t head out before 10pm – the locals are late drinkers.

So behold, the best bars in Barcelona…

PS You can explore all of our favourite restaurants, bars, hotels, and things to do in our full Barcelona City Guide 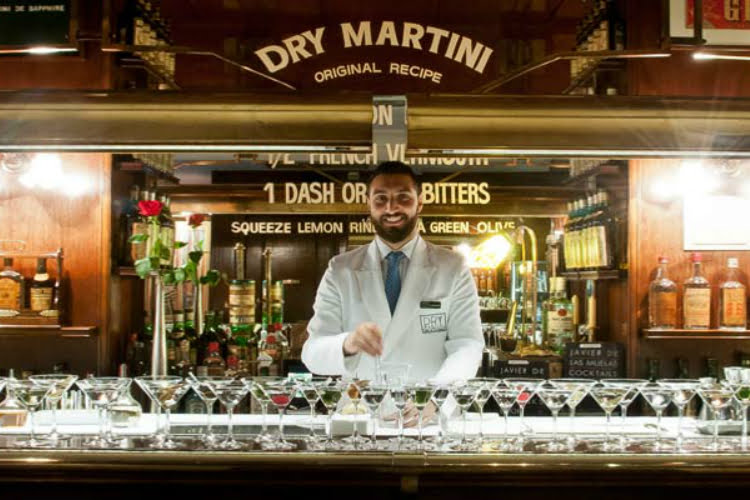 When this place first opened back in the 70s, all you could order was a martini (dry, of course). Nowadays they’ve branched out into other classics – which is good, because it turns out they’re pretty nifty at those, too. Knock on the innocuous-looking doorway at the back, and sweet talk your way past the doorman to get a table at the Speakeasy restaurant, where the menu is paired with cocktails.
Details: Mon-Thur 1pm-2.30am, Fri 1pm-3am, Sat 6.30pm-3am, Sun 6.30pm-2.30am | Carrer d’Aribau, 162 – 166, Esquina Corcega | €€
– 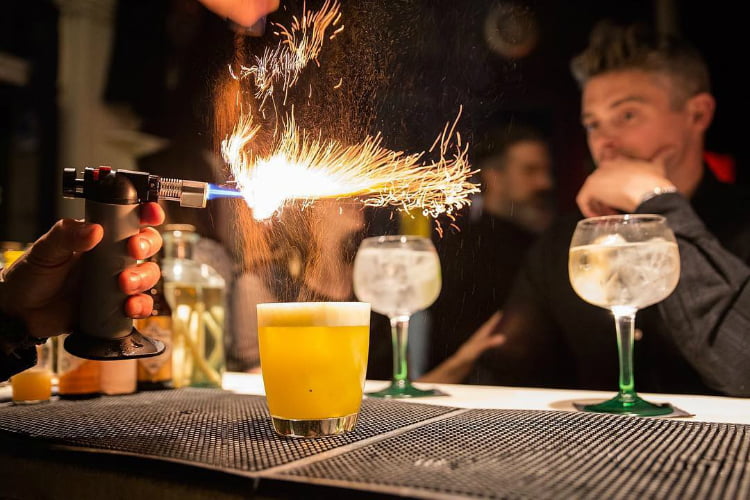 Set in an old dairy, XIX (‘chicks’) is the big cheese of gin bars in Barcelona. Take a pew at their sleek marble bar to watch the barkeeps deftly pick out house-made infusions (like ‘tarty chocolate’) from the multiple rows of gin propping up the wall – or order a cocktail like the smouldering Aromas de Panamá.
Details: Mon 6.30pm-2.30am, Tues-Weds 6pm-2.30am, Thurs 5pm-2.30am, Fri – Sat 5-3am, closed Sun | Carrer de Rocarfort 19 | €€
–

Everything seems better at Rubí. Maybe it’s just the rose-tinted glasses. Or maybe it’s the fabled gintónicas they serve, made with a library of house infusions showcased in the custom-made, circus-styled bar. Intimate, candlelit, and strung with rosy fairy-lights, there are probably less romantic places you could go…
Details: Open daily 7.30pm – 2.30am (3am Thurs/Fri) | Carrer dels Banys Vells, 6 | €
– 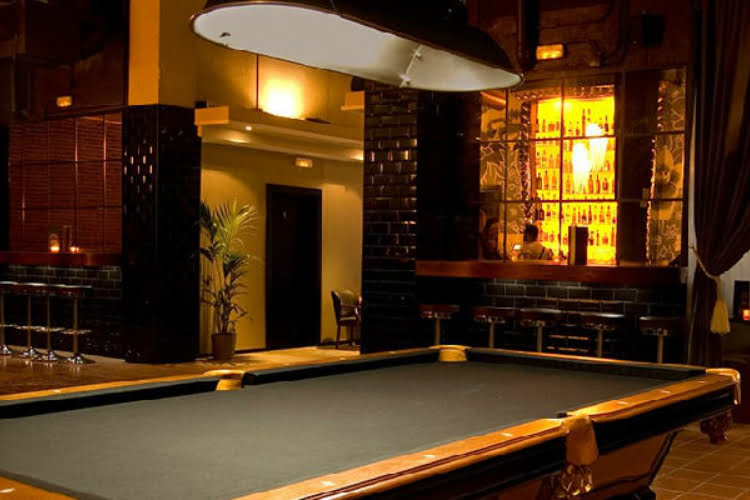 A total 180 from the more traditional bars in Barcelona, Marmalade is big. Set in an old furniture store, it sports grand, lofty ceilings, propped up by antique copper-clad walls that cast a warm, sophisticated sheen on the surroundings. Order a liquored-up sangría, hit the handcrafted pool table, then order a nightcap at the bar for a tête-à-tête with the barkeeps.
Details: Mon-Thur 7pm-2am, Fri-Sat 10am-2.30am, Sun 10am-2am | Riera Alta 4-6 | €
_

If anyone could give an Ernest recommendation for a good drinking hole, it’d be Hemingway. And you can follow in his footsteps at his (and Picasso’s) old haunt Marsella, an atmospheric absinthe den that’s been knocking around since 1820. It’s barely been given a lick of paint (or a dust) since then, but that’s all part of its charm.
Details: 10am-2pm, 6pm-2am daily (2.30am Fri-Sat, no morning service on Monday) | Carrer de Sant Pau 65 | €
_

El Armario is a hole in the wall bar that can only be accessed through the wardrobe of the owner – who only opens when he feels like it. And to make matters worse, it’s not anywhere on the internet. If you’re in the neighbourhood, swing by, and you might get lucky – urban legend from the locals says it’s worth it.
Details: No fixed hours | Carrer de la Riereta 11 | €€
_ 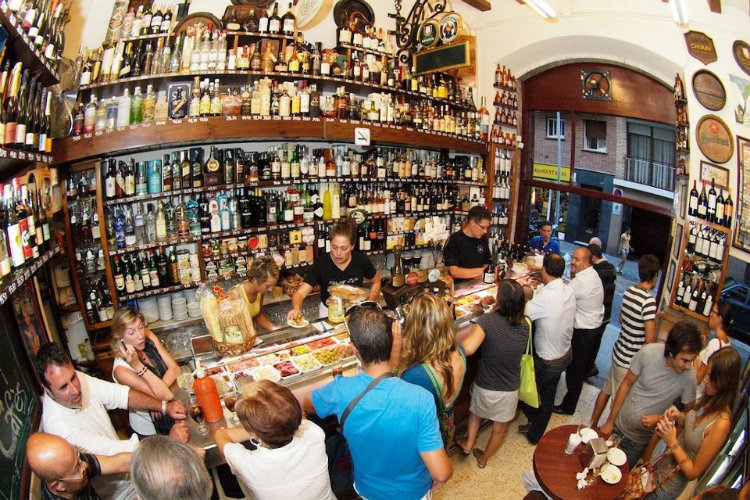 This century-old tapas bar probably has more space behind the bar than in front of it. But if you’re ready to get a little cosy, you’ll be rewarded with one of the most atmospheric bars in the city (think bottles crammed right up to the ceiling), and tasty bites from the affable 5th generation owner, Joaquim Pérez.
Details: Open weekdays 12-4pm, 7-10.30pm | Carrer del Poeta Cabanyes 25 | €€

In true speakeasy style, the Pipa Club has attempted to restore their secrecy by upping sticks from the Plaça Reial and establishing themselves down a dark Gràcia alley. Their new spot retains all the charms of the old, however, with a smoky atmosphere, late-night live jazz, and excellent cocktails.
Details: Open 10pm-2am Thurs-Sun | Carrer de Santa Eulàlia 21 | €€
–

If you’re after an authentic Barcelona bar, El Xampanyet is as old-school as they get. Practically unchanged since the 20s, it’s a proper tapas joint with ancient wine bottles and barrels lining the tiled walls and a pretty spirited local crowd crammed inside. The guys behind the bar will be able to point you to the best dishes, and make sure you get a glass (or bottle) of the house speciality, cava.
Details: 12-3.30pm, 7-11pm daily (no evening Sunday, closed Monday) | Carrer de Montcada 22 | €€
_ 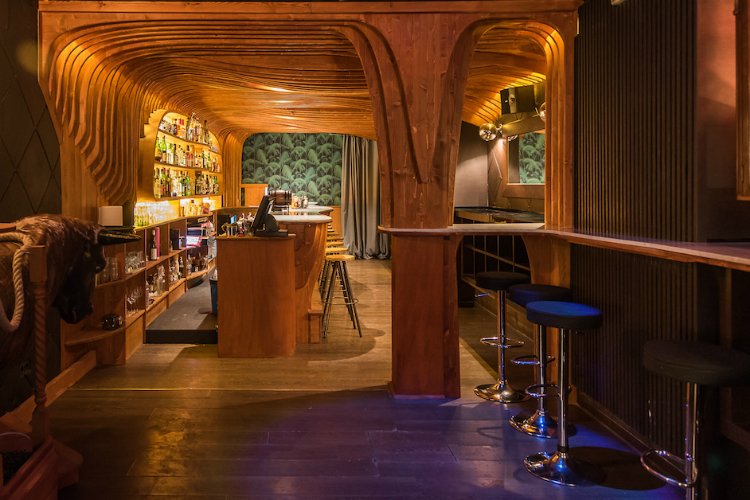 For many people, paradise is already in a pastrami bar. But Paradiso takes it a little more literally: head to the wooden fridge door at the back of the sandwich shop, and cross into Paradise. Moody and well-soundtracked, with retro wooden panelling and botanical wallpaper, the barkeeps here are genuine magicians, serving up Nightjar-style cocktails with theatrical panache. What’s more, they’ve just earned a coveted spot on the World’s 50 Best Bars list.
Details: Open 7am-2am (3am Fri-Sat) | Carrer de Rera Palau, 4 | €€€
_

There’s no menu in this dark, scarlet-walled bar – instead, the barkeeps are constantly put to the test by listening to your personal tastes and creating a totally unique cocktail each time. Failing that, there’s no way they’re going to let themselves serve a bad negroni.
Details: Open 7pm-2.30am (3am Fri-Sat) | Carrer de Joaquín Costa, 46 | €€
–

Planted opposite the beautiful Santa Maria del Mar church, La Vinya Del Senyor are conducting some wine-based miracles of their own in this small but atmospheric bar and terrace. There’s a hefty menu of wines from all over the world available by the bottle and glass; plus some of the best cheese and charcuterie plates in town.
Details: Mon-Thurs 12pm-1am, Fri-Sat 12pm-2am, Sun 12pm-12am | Plaça Santa Maria, 5 | €€€
– 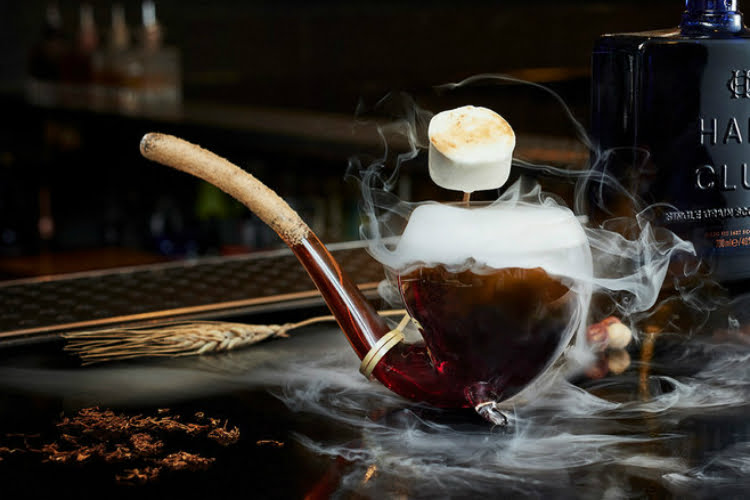 The drinks in this sleek Barcelona institution are anything but old fashioned (except, of course, the Old Fashioneds). Tuxed-up barkeeps will whip dozens of ingredients into seriously theatrical concoctions, which are served in everything from smoking treasure chests to ice cream cones and gumball machines.
Details: Tues-Thurs 12pm-2am, Fri 12pm-3am, Sat 5pm-3am, Sun-Mon 5pm-2am | Carrer de Santa Teresa, 1 | €€
_

Everyone agrees drinking in a cave is cool – and that’s not just an echo chamber. Las Cuevas is a Gaudí-esque grotto of a bar, laced with stalactites, tealights hidden in nooks in the rock, and lined with old barrels. The drinks here have a Cuban flavour, but owner Jack performs magic behind the bar (literally and figuratively), and will happily knock something up for you.
Details: Open Tues-Sun, 7pm-3am | Carrer d’en Gignàs, 2 | €€
_

This relatively young, pared-back hophouse features a rotating series of 40 crafts brews on tap, 20 of which are made two doors down at the house brewery, Instituto de la Cerveza Artesana (the Artisan Beer Institute). It’s a little starkly lit inside, so pick your brew and head out to the terrace to enjoy with some tapas.
Details: Fri-Sat 12pm-2am, Sun 12pm-12am, Mon-Thurs 5pm-12am | Carrer de Vila i Vilà, 77 | €€
_ 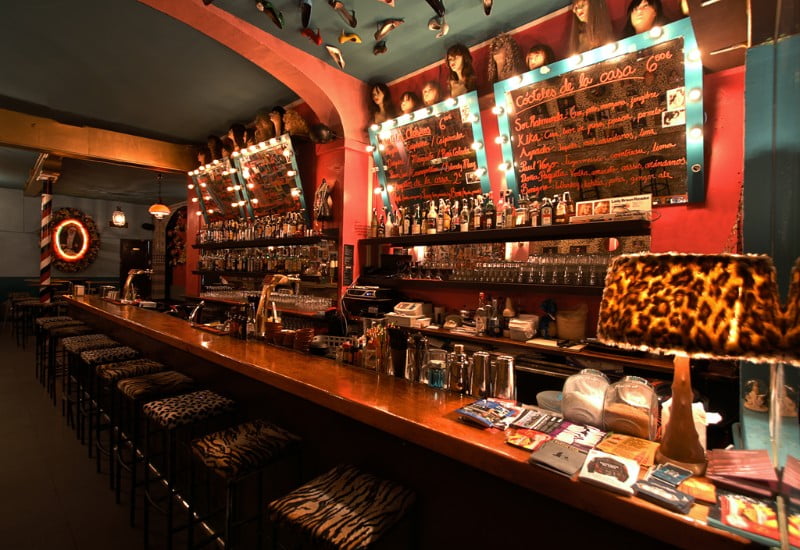 Surreal, unique, and swathed in an excess of kitsch, Sor Rita does everything its own way. Interior decor? There are heels glued onto the ceiling. Cocktail menu? It’s written in lipstick. Fancy ordering the chorizo? IT COMES ON FIRE.
Details: Open daily 7pm-late | Carrer de la Mercè, 27 | €
_

Understated and elegant, this oddly triangular, family-run bar has been going since the 30s – and their drinks have been finessed accordingly over the years. The wood panelled walls are plastered with photos of their illustrious founder Miguel Boadas (who used to serve daiquiris to Hemingway), and the crowd is peppered with regulars. Join them for an aperitif at the start of the evening, then catch up with them later for a nightcap.
Details: Mon-Thurs 12pm-2am, Fri-Sat 12pm-3am, closed Sun | Carrer dels Tallers, 1 | €€
_

Stepping into Milano is like descending into the berth of the Titanic – huge, white-painted iron columns and girders hold the place up, while well-dressed barkeeps shake up the cocktails behind a sleek wooden bar. Take a seat in the retro tub chairs, order some tapas, and sit back for the nightly live jazz that the place is known for.
Details: Tues-Fri 12pm-3am, Sat 12pm-2.30am, Sun 6pm-2.30am, Mon 6pm-3am | Ronda Universitat, 35 | €€€
_ 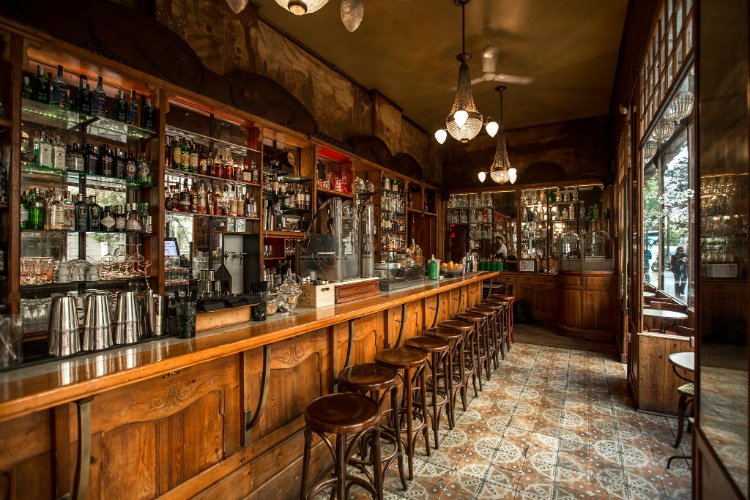 Set in a lovingly maintained sweetshop from 1912, La Confitería comes from the team behind El Paradiso. This spot requires less detective work to get in, but the drinks are no less adventurous, arriving in miniature bathtubs and billowing plumes of smoke.
Details: Mon-Thurs 7pm-2am, Fri-Sat 6pm-3am, Sun 5pm-2am | Carrer de Sant Pau, 128 | €€€

PS After some sustenance to accompany that drink? Take a look at the best restaurants in Barcelona