Behold a brief history of shuffleboard –

It was invented in England in the early 1500s. Henry VIII played it, and its popularity spread. It became so wildly addictive that people stopped working, and so in 1542 the government had to ban it.

But now it’s back.

And the people brazenly risking our economy by unleashing this illicit pastime on an unwitting public once more are none other than The London Shuffle Club, who – having tried and tested the idea via two long-term pop ups, have determined that the masses are indeed, still very keen on shuffleboard – now run the show at a permanent, two-level home in Shoreditch. 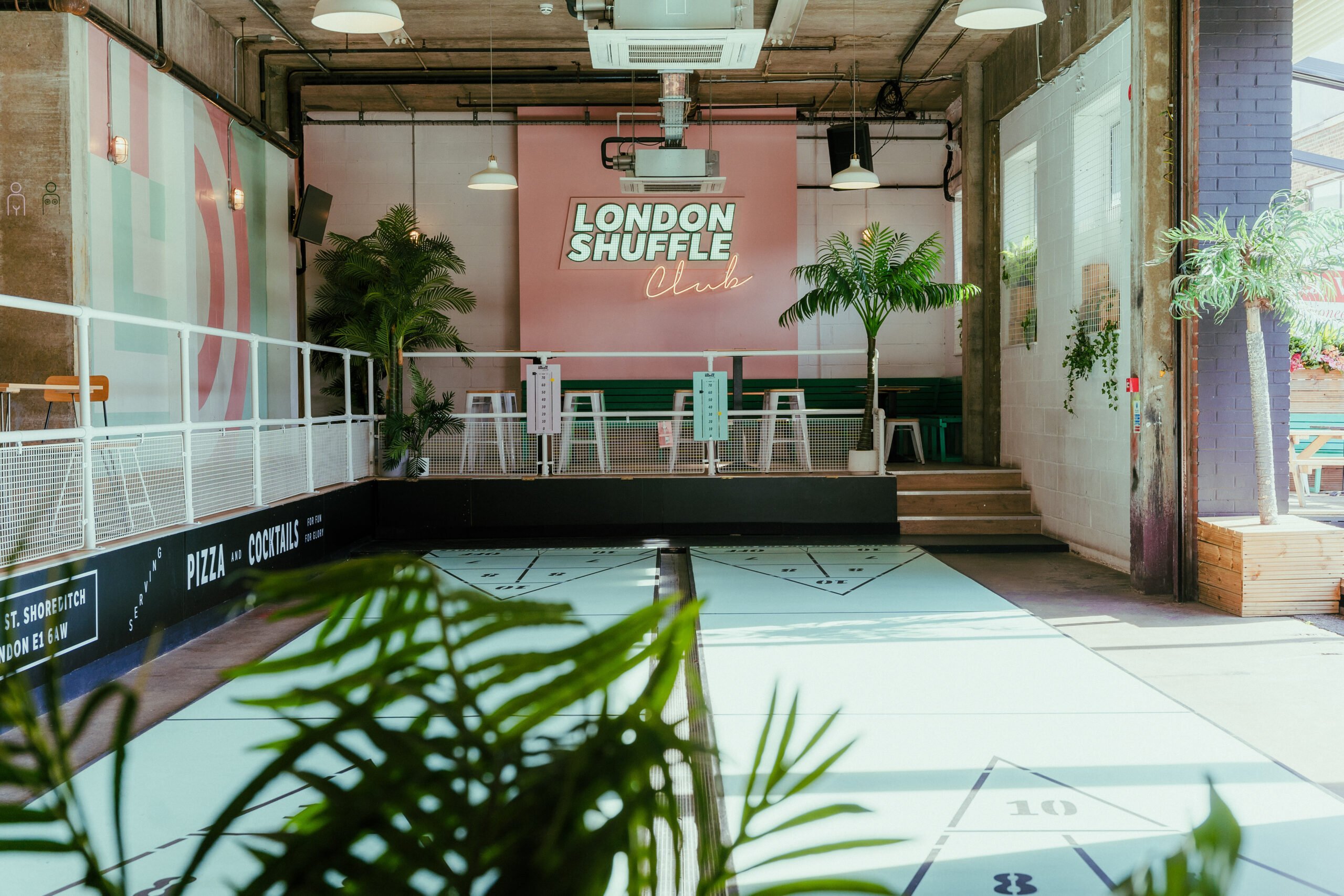 HOW TO PLAY SHUFFLEBOARD:

Like most competitive sports, if you want to be good at shuffleboard, it helps to be pushy. The court’s basically a huge rectangle, and you use a cool-looking stick (called a “tang”) to push the puck (called a “biscuit”) down into the triangular scoring zone at the end of the lane (called the “lane”). It’s a bit like curling, except fun. Punt your biscuit too far, and it’ll end up in the “kitchen” – a minus 10 scoring zone which is, ironically, not where you want to keep your biscuits. You’ve got about an hour to score as many points over the other team as you can, and the lanes are all fitted with scoreboards to help you  keep track.

As the night wears on, you may choose to mosey downstairs to London Shuffle Club’s more recently opened, dimly-lit, tabletop shuffleboard bar, ‘Crazy Eight’. There’s two miniature lanes here, as well as a ‘snapback’ table, where you’ll need to get your biscuit to rebound rather than slide to the end. SOUNDS SIMPLE. SO, WHAT IS THERE TO EAT/DRINK?

Glad you asked. London Shuffle Club are slinging sourdough pizzas from their wood-fired ovens topped with everything from breakfast-inspired eggs and smoked pancetta to Italian sausage with parsnip and gorgonzola; garlic mushrooms; or pepperoni with fresh chillies. Their al fresco shuffleboard terrace also features a converted airstream caravan, from which they’re serving up sharing cocktails, boozy slushies, and cocktails like the Whiskey Shivers, with Bourbon, apricot, bitters, lemon, and Pilsner. And on weekends, there’s a bottomless brunch on offer, at which you can flag down endless top-ups of prosecco, beer and pizza as you play.

And just a little reminder that “shuffleboard is a one-handed game”.

NOTE: The London Shuffle Club is open Tuesday-Sunday. Lanes cost £25-42 for a one hour slot (depending on time of day and whether indoor/outdoor), irrespective of the number of players you bring with you. Do note, though, that this is really a team game which works best for groups of 4-8… so don’t bring too many friends along.  You can book a lane right HERE.

Like having fun? You’ll probably want to read up on the best things to do in Shoreditch, then