We’ve been told we have trouble tapping into our emotions.

We don’t know how we feel about that.

But Banquet of Hoshena depicts an even more terrifying proposition: a world where emotions are banned entirely. It’s the new immersive feasting experience from the people at Dinner Story Time in collaboration with Studio McGuire, who use a cool technique of projection mapping millimetre-perfect, vibrantly colourful images onto the tables, the walls, and even the crockery itself. And then serving some decent food on top of it all.

For this new show, they’ve taken over a temporary space in Shepherd’s Bush. Making your way inside, you’ll see a perfectly white table topped with perfectly white plates sitting in the centre of the room. As you take your seats, the lights will dim, and the show will start – that table with suddenly appear to be a vibrant green, the walls will come to life with colour, and the small bust in the corner will start to talk to you, introducing herself as the Queen of Hoshena. 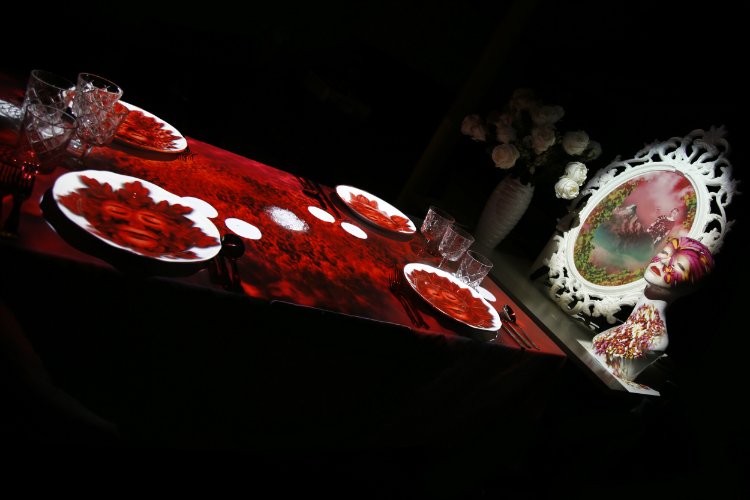 She will explain that her land was once a luscious kingdom of thriving beauty, but that in banning the bad emotions of anger, sadness, and fear, they also inadvertently removed love, happiness, and courage. Now the land lays bare and barren. Which kinda sucks for them.

Your plate, in contrast, will be putting forth quite a bounty, with five courses accompanied by wine & cocktail pairings crossing it over the course of the evening. Each course will represent a new emotion that will perfectly correspond with the storyline, meaning that yes, they’re almost literally offering you a happy meal.

It’s all interactive, and it’s been planned in absolutely meticulous detail – there’ll be props, scents, sounds, illusions, and your table will find itself covered in everything from “fairies” to “erupting volcanoes”.

NOTE: Banquet of Hoshena will take place from 19th April until 25th August. Tickets start at £85pp and can be purchased HERE.

Like immersive stuff? Allow us to introduce you to Otherworld…

Things To Do Ended Fitzrovia