But hām, apparently means ‘home’ in Old English. And it looks like ex-Ledbury chef Matt Osborne has finally found his.

It’s up in West Hampstead, and it’s his first solo venture after working at the award-studded Ledbury, Salon in Brixton, and the Other Naughty Piglet. And it is, in fact, pretty homely, thanks to the cosy velvety banquettes lining the wall, the shelf dotted with potted cacti and antique mirrors, and the huge windows pouring sunshine onto the whole airy, light-coloured space.

Ok, so it’s like a really, really fancy home. 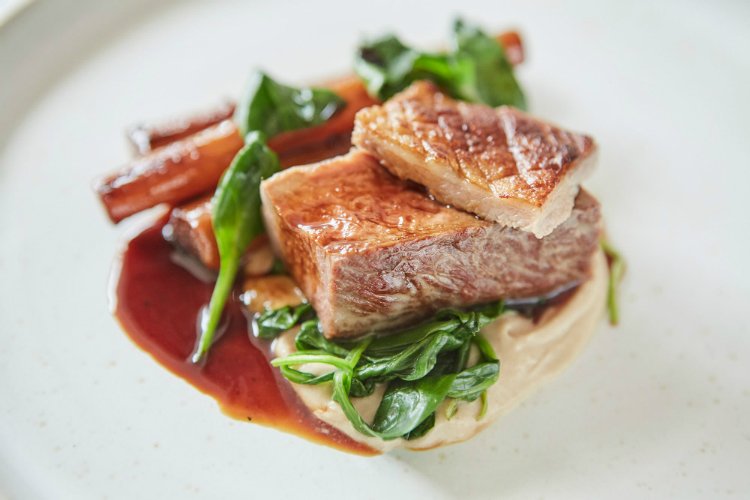 But there’s no stuffiness or pretension here – the dishes might sound complicated, but they combine ingredients in a way that feels surprisingly intuitive. Being Australian, he serves not lunch, but brunch and dinner only, so you can pick from menu-fillers like pancakes with loquats, lemon curd and crème fraîche; and (later in the day), Norfolk quail with pearl barley, hen of the woods and rainbow chard; raw beef with sunflower seeds, watercress and shallots; and saddleback pork with margherita onion, cucumber and anchovy.

Desserts, meanwhile, include a bevy of cheese from Neal’s Yard and sweets like banana mousse with white chocolate, mango, coconut and basil… Or, you could opt to wash it all down with a cocktail like the Hām Sour, with Sacred whisky liqueur, rye, maraschino, lemon and egg white.

And, apparently, no ham.