‘Meraki’ is a Greek word.

According to Greek people it refers to the elusive qualities of love and soul that someone puts into their work.

And according to Google Translate, it means ‘taste’.

So, while Google Translate could clearly do with a little more meraki, it makes for a pretty decent restaurant name either way. Especially a Greek one. So it’s a good thing that the people behind Zuma, Roka, and Oblix at The Shard opened one in Fitzrovia.

The space itself is, as you might expect, quite pretty; it hits you with a hard-to-pin down Mediterranean quality, thanks to the pristine whiteness of the ceiling, the patina of the unvarnished wooden floors, and just the right amount of greenery dotted about the place. There are no gaudy statues, or decorative olive trees. It’s understated, and feels all the more authentic for it. 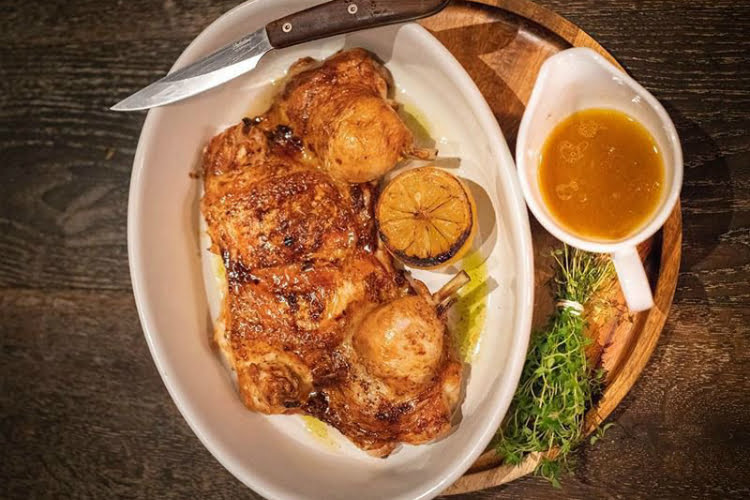 The food features a list of Greek classics prepared for the most part as simply as possible, but with the occasional modernising twist. The squid is simply lightly fried with a little fresh parsley, and there’s some courgette & aubergine tempura served with tzatziki.

The larger dishes range from the rotating ‘catch of the day’ which is scorched on their cast iron grill with just lemon & olive oil; to a slow-cooked beef cheek served with house-made hilopites pasta (it’s small and square, like the teeniest lasagne sheets you’ve ever seen); to a baby chicken marinaded with mustard sauce, herbs, and Burt lemon.

And to drink? You could stay upstairs and grab a some Greek wine, something from the country’s burgeoning craft beer scene, or even a cocktail (the Alexander the Great involves a kind of Greek brandy called Metaxa, blended with chamomile syrup & lemon tonic) or you could make your way to their clandestine bar downstairs. It’s hidden behind a bookshelf…

…but everything you need to read is right HERE.

NOTE: Meraki is open daily – you can make a reservation on their website right HERE.