If you’re reading this while having your tongue caressed by a perfectly seasoned bowl of noodles before being gently bathed in beer, then you can go ahead and move onto the next article.

If not, then you’ll want to read on…

Because Shoreditch just got a new, authentic, regional Chinese joint that specialises in both those things, and does them rather well. And it’s helpfully called Noodle & Beer.

It’s the brainchild of Sichuan-born Xiaoxiao Wang who, after a brief stint at fashion school, decided he’d rather be making something tasteful for the inside of your stomach than the outside. And as luck would have it, nearly every member of his family works in & around the hospitality industry, so restaurants have always been a big part of his life. In fact, he used to spend many of the hours after school learning the ropes of a restaurant kitchen while being taught everything he knows today about Sichuan & Chongqing cooking. 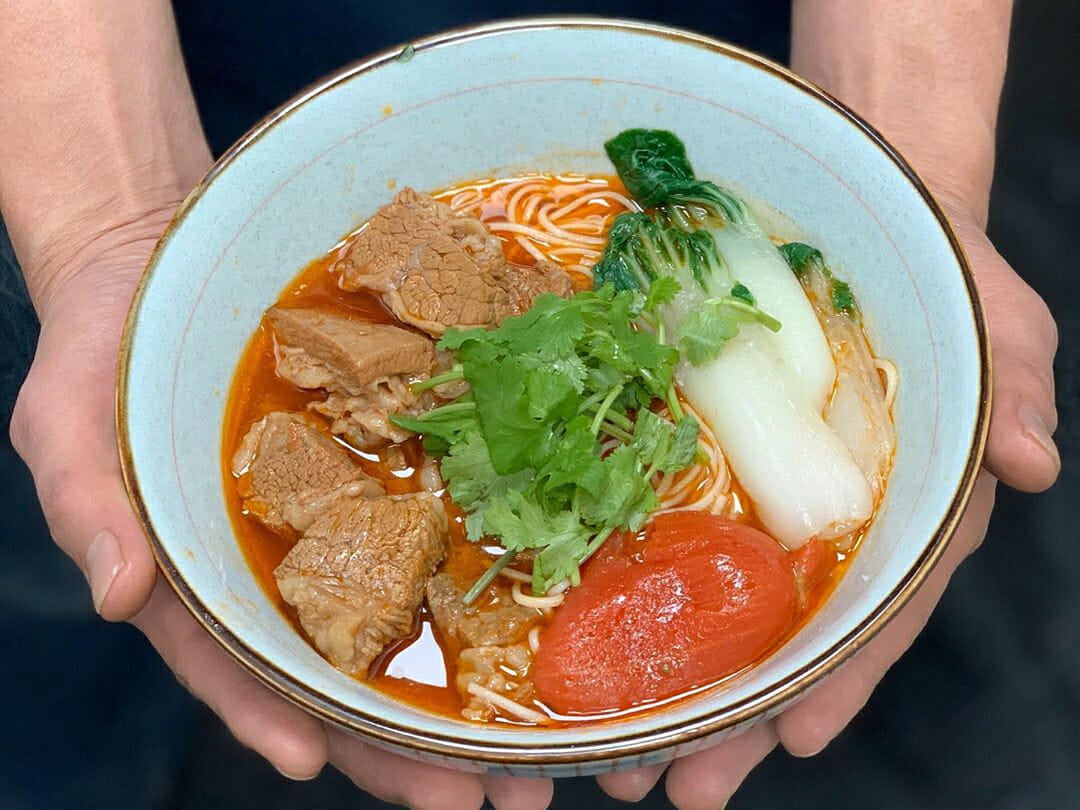 The space he’s landed in for his first foray into eatery ownership is a surprisingly large venue, which seems to have been originally pencilled in for a chain restaurant of some kind, but which somehow fell into his hands – and in the month between getting the keys and cutting the ribbon on it, he’s transformed it into something that tries to undercut its built-in sterility by showing off its personality wherever it can, with some really beautiful over-sized illustrations, and a blood red toilet that apparently takes inspiration from a Le Boutin shoe (it even has its own singing, heated mirrors).

The menu pretty much revolves around the Chongqing Xiaomian – a sensational bowl of highly seasoned, often spicy noodles served either with or without soup. In fact according to Wang this dish is “an obsession” in the Chongqing and Sichuan provinces. Here, there are eleven Chongqing Xiaomian options on the menu, each one packing in close to a dozen different spices & herbs a-piece. You’ll find things like fragrant egg noodles with minced pork, chickpea, cabbage, spring onions, pickled greens, and chilli; or rice noodles served in a soup with basa fish, sour mustard greens, bean sprouts, coriander, and white sesame seeds.

They also offer a pleasingly varied selection of small plates to go with it all, including everything from minced pork and lotus root Sichuan dumplings, to deep fried sticky rice cake dipped in brown sugar (a sweet respite from the rest of your likely quite spicy meal).

As for the beer? There are strangely only a couple of Chinese & South-East Asian options on the menu here, although both complement the noodles nicely.

And they won’t be the only ones…

NOTE: Noodle & Beer is open for lunch and dinner, Monday-Sunday. For exact timings, or to book, visit their website here.

If you like regional Chinese cooking…you probably want to check out X’ian Impression too.