There are three unwritten rules to opening a great new restaurant:

And the people at Som Saa know them all.

After all, their residency at Climpson’s Arch was one of the most successful, critically acclaimed popups the city has literally ever seen. This permanent spot – which was financed by a massively popular crowdfunding campaign – is set up in a former fabric warehouse in Spitalfields.

Here’s how they’re getting it right:

1. The space looks pretty spectacular, with rustic wood, industrial cast iron, and bare brick all neatly commingling. It’s big too, with a front-and-centre stool-filled bar area making way to a spacious, moodily lit dining room in the back.

2. The food comes courtesy of a pair of chefs (one of whom was a MasterChef finalist) who learned the trade at London’s Nahm – the first Michelin starred Thai restaurant anywhere on earth – before moving onto Bangkok and New York. And it’s good. 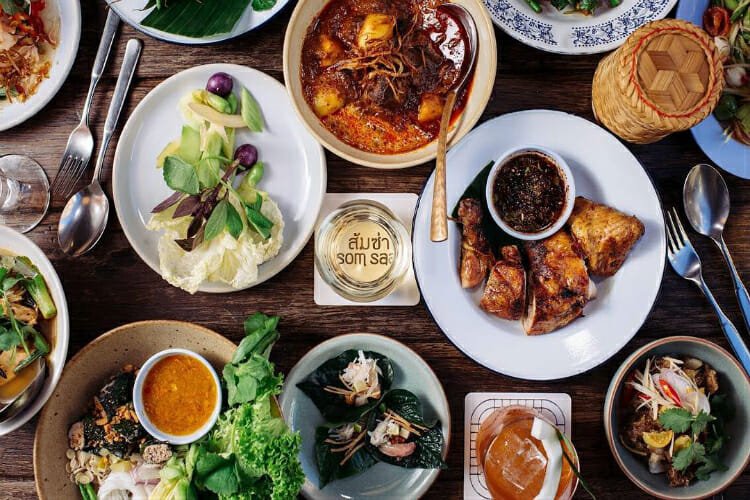 The regularly rotating menu at Som Saa features a few of the favourites from the popup – like nahm dtok pla thort (deep-fried seabass with Isaan herbs and roasted rice) – as well as all-new goodness including gaeng mussaman pbet (a curry of duck leg and quince) and wok-fried pad phrik king pla, a red curry stir fry with trout, snake beans and kaffir lime leaves.

3. Drinks? Well, they’re rocking craft beers, menu-friendly wines (from natural to fortified), and cocktails with ingredients straight out of the kitchen – the Muay Thai Kick combines those kaffir lime leaves with gin, Thai basil and soursop… which you officially have to try.

NOTE: Som Saa is open for dinner daily and lunch Tues-Sun. You can make a reservation, and find out more, on their website HERE.

Making a night of it? Check out our guide to the Best Bars in Shoreditch