On Día de Muertos (“Day of The Dead”) Mexico welcomes back the spirits of its ancestors, honouring their memory and celebrating life through colourful symbolism, togetherness and joy.

And this year PATRÓN tequila is bringing the festivities to life in some of London’s best bars with Día de Muertos inspired cocktails and exclusive events, culminating in a vibrant Mexico City-style parade outside Café Pacifico in Covent Garden, from 7pm on Tuesday 2nd November.

In Mexico the Día de Muertos festivities take place on 1st & 2nd November, when it’s believed that the spirits of the departed are granted divine permission to return to the earthly plane and visit those still living. The ancient tradition is rich with instantly recognisable symbols like the papel picado; colourful bunting pricked with holes to allow spirits to pass through; and the fragrant cempasúchil (which are marigolds whose scent is used to lead the souls of loved ones to family altars laid out with offerings). 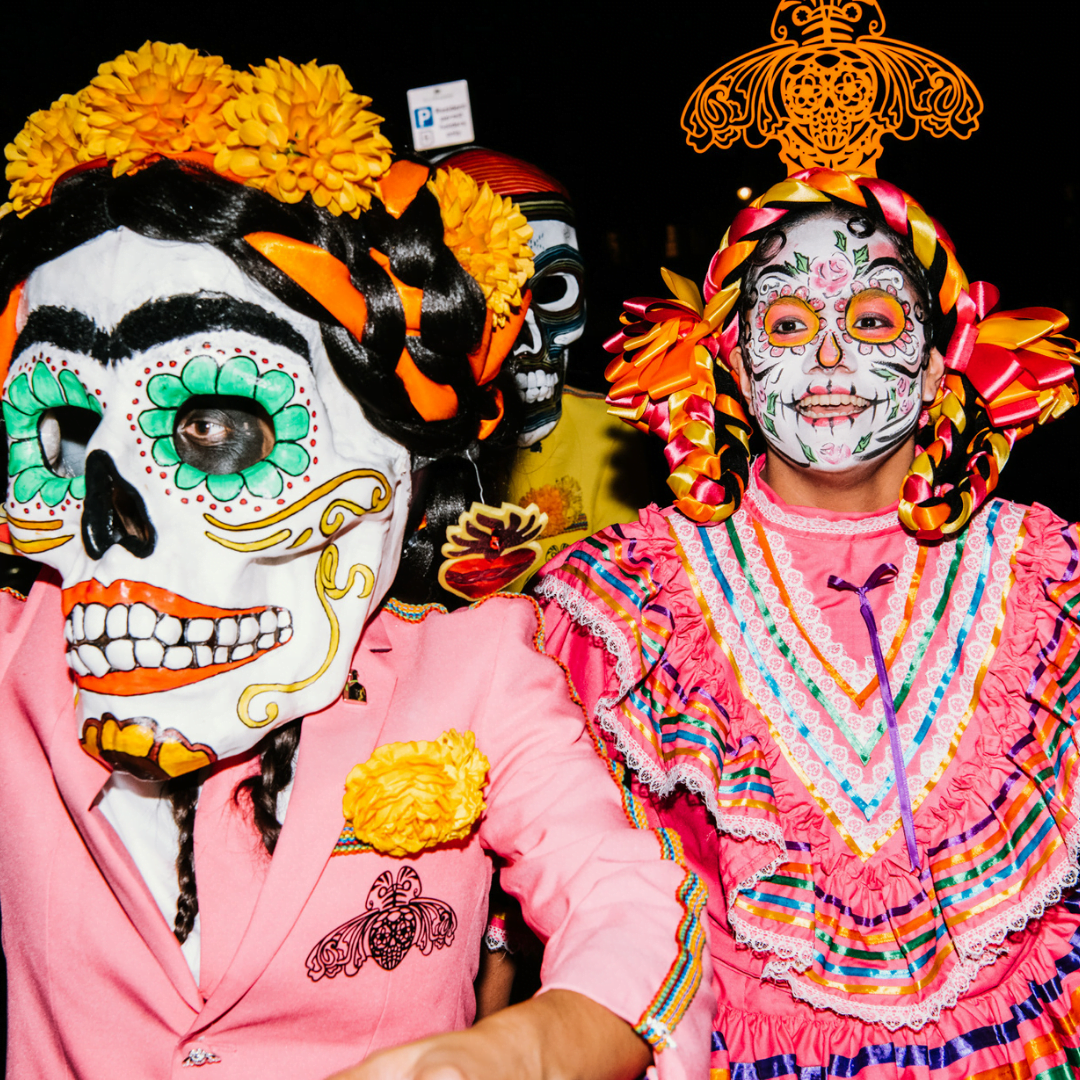 And so PATRÓN’s going to pluck a small slice of Mexico’s spirited celebrations, and bring it here for people to raise a glass in honour of the living and the dead. It’s teamed up with some of the best drinkeries across the capital to create exclusive Día de Muertos cocktail menus, variously accompanied by live music, DJs and colourful Mexican decorations at each venue to deliver that Mexican feeling. You can take a look at the different bars taking part on the map here (why yes they do form a rather convenient, easily navigable crawl…), and here’s what you can expect:

Los Mochis, Notting Hill (30th Oct – 7th Nov): a recently opened mash-up between Mexican and Japanese culture, where you’ll be able to dance to DJs, nibble on fusion dishes like the miso black cod taco, and wash it all down with a PATRÓN cocktail or two; 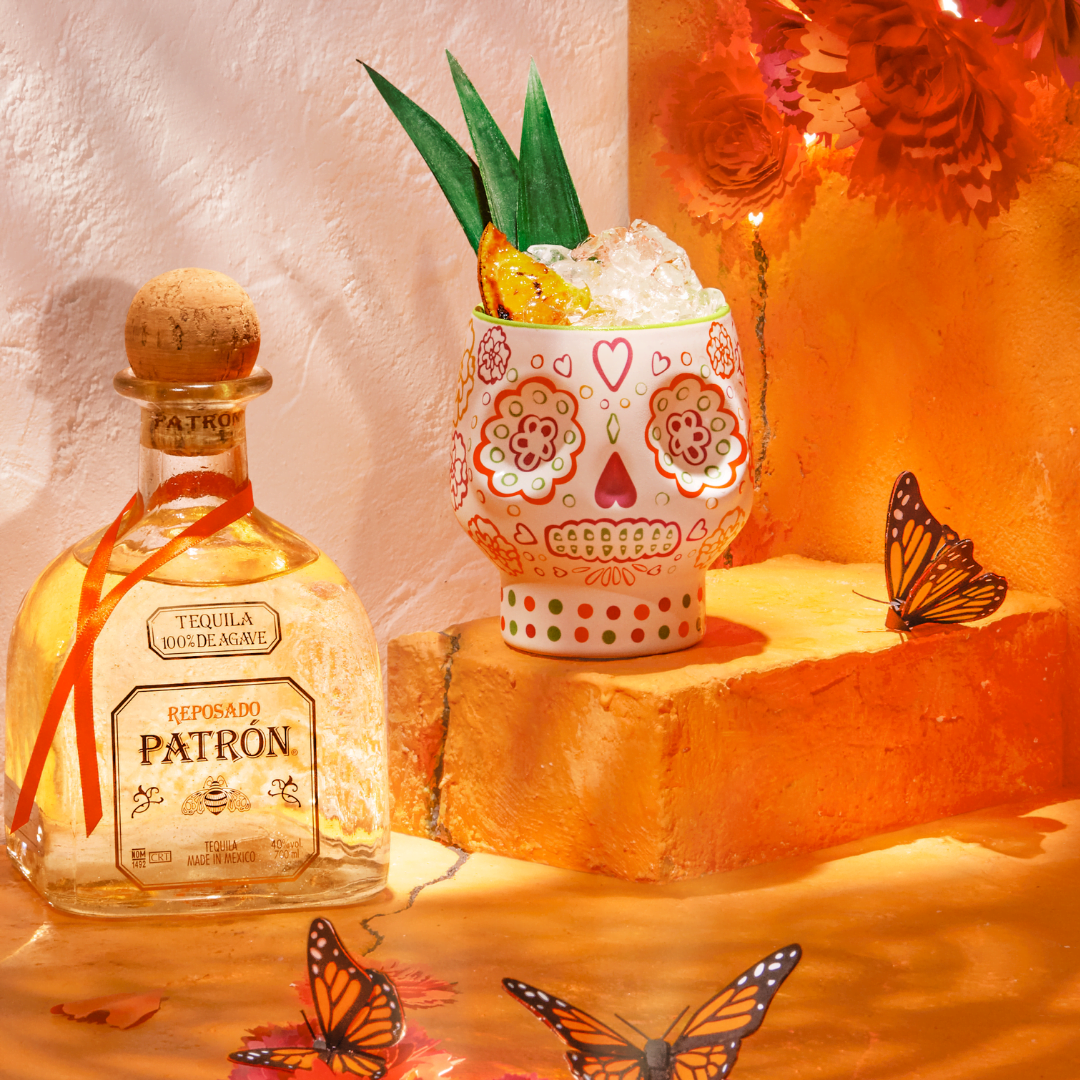 The Anthologist & The Folly (18th Oct – 7th Nov): where bespoke PATRÓN cocktails will be served up against a backdrop of classic Día de Muertos decorations;

Park Row, Soho: a suave new restaurant & bar complex inspired by Gotham City, where cocktails will be served alongside live music; and

This last one also just happens to be where – should you find yourself strolling down Langley Street at 7pm on 2nd November – you’ll be met with an exuberantly colourful, high-spirited procession of people decked out in traditional Mexican garb and wearing giant calaveras skull masks, which’ll be snaking around the immediate vicinity for an incredible two hours.

That’s a lot to process.

NOTE: You can see a handy map of where to find PATRÓN’s Día de Muertos cocktail menus right here (or directly below this text) and check out its video all about Día de Muertos’ Mexican story on Instagram here. The parade’s free to attend – it starts outside Café Pacifico on Langley Street, Covent Garden, on 2nd November, 7-9pm. 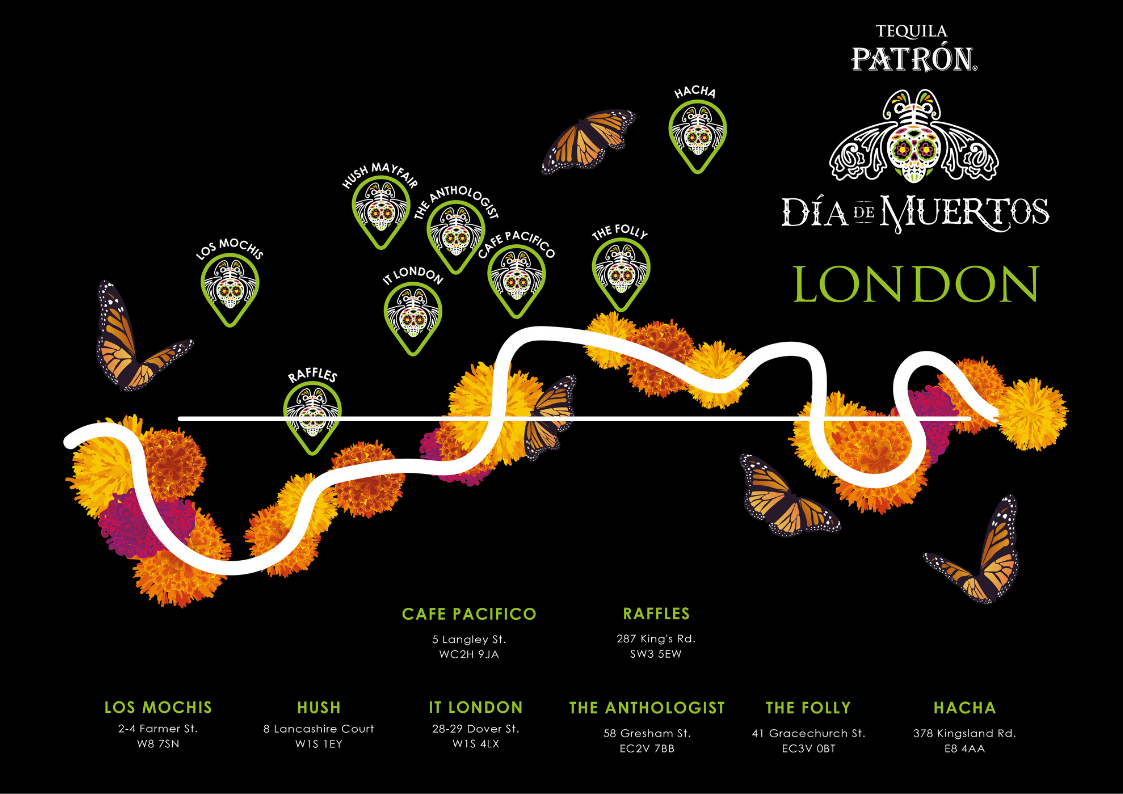