“My biggest fear in life is to be forgotten.” – Eva Perón

As an actress-turned-First Lady of Argentina; labour rights activist; health minister; charity founder; women’s suffrage champion; founder of the country’s first large-scale female-led political party; and “Spiritual Leader of the Nation”… Eva Perón could probably forget about being forgotten about.

But just in case, Andrew Lloyd-Webber also wrote a musical about her.

With lyrics by the inimitable Tim Rice, Evita premiered in the West End in 1978, promptly won the Olivier for Best Musical, transferred to broadway the year after, and became the first British show to win the Best Musical Tony. Not too shabby. And now, over a decade since it was last performed in London, Evita’s making a comeback at the Regent’s Park Open Air Theatre. 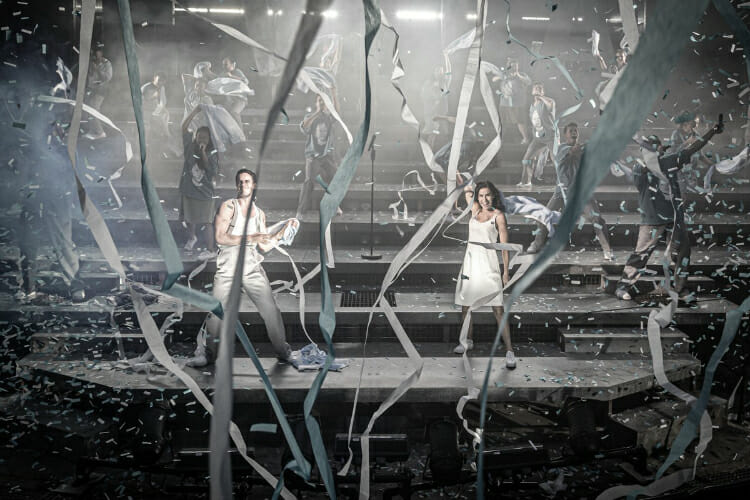 With rows of amphitheatre-style seating and a sprawling outdoor stage surrounded by a canopy of trees, it’s a deeply atmospheric venue that allows for the kind of ambitious staging that can be hard to get inside a theatre. You can grab a pew and take in the impressive choreography from on high, or book yourself a spot on the grassy banks to the side (you can even pre-order a little hamper filled with English sparkling wine, which’ll be waiting for you there).

This Evita is an all-new production from renowned director Jamie Lloyd, an Olivier award-winner who recently put on the panoply of Pinter plays at the Pinter Theatre. And if you’ve not seen any of his work before, let’s just say he likes to do things a little differently. He’s taken a radical step away from the typical romanticised 40s styling, and sets it in a (heavily 90s-influenced) modern day. Instead of the streets of Buenos Aires, Evita’s rise from rags to riches is played out like a rock concert, on huge concrete bleacher-style steps. And it all starts with a (very literal) bang. 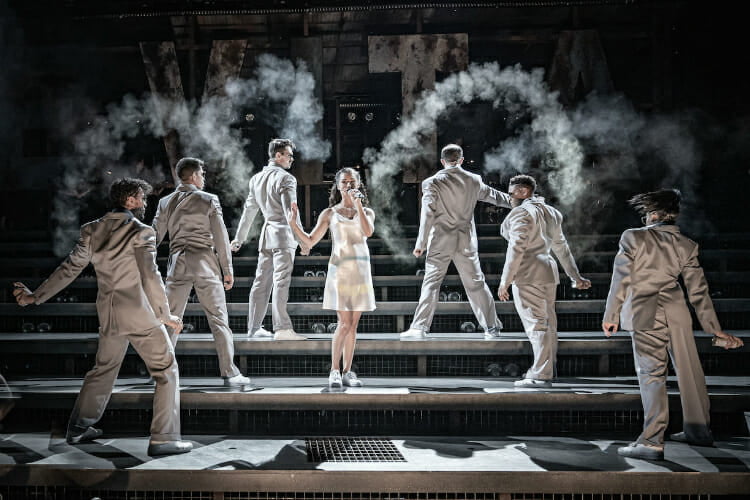 Evita’s death is announced, and her followers streak across the stage trailing smoking flares. The whole show’s a riot of colour, noise and passion, filled with confetti cannons, huge columns of flames and fireworks. You’ll see the chorus twerking, pop-n-locking and shaking pom-poms one minute, and switching to fiery Argentine tango the next. There are no diamonds or glamorous ball gowns; Evita’s a street kid in a white slip dress and sneakers, while her detractor Che stalks the stage in a, er, Che t-shirt. Evita was an ambivalent figure who’s still revered almost religiously by many, but despised by just as many others – and this production doesn’t shy away from that, subtly suggesting that the strain between political life and celebrity was only just beginning back then.

With a powerful cast, dazzling pyrotechnics and a huge live orchestra belting out a tightened up soundtrack, it’s a thrilling production of a musical that was starting to feel like it could only be done by the book.

This Evita definitely won’t be forgotten.

NOTE: Evita runs at the Regent’s Park Open Air Theatre until 21st September. Tickets cost £25-65, and can be booked HERE.

Like knowing about the best shows? See the best theatre shows playing in London right now