We're Getting a Green Planet Pop Up... With A Holographic Sir David Attenborough

Back when David Attenborough first joined the BBC there was only one channel, and colour TV wouldn’t be introduced for another fifteen years*.

Now, for his latest show with them, he’s appearing as a hologram in an immersive, augmented reality pop up.

Yes, a hologram. And it’s only fitting for a career that has blossomed for so long, so spectacularly that it should be in honour of the The Green Planet AR Experience, exploring the extraordinary world of plants by navigating half a dozen different biomes with the help of some bleeding-edge tech.

You’ll find it in a (surprisingly large) space sitting on the iconic curve of Regent’s street as it sprouts out of Piccadilly Circus. It’s all completely free to visit, although you will need tickets, because it’s basically a way to show off EE’s 5G network, by streaming all of that augmented reality content as you wander around. 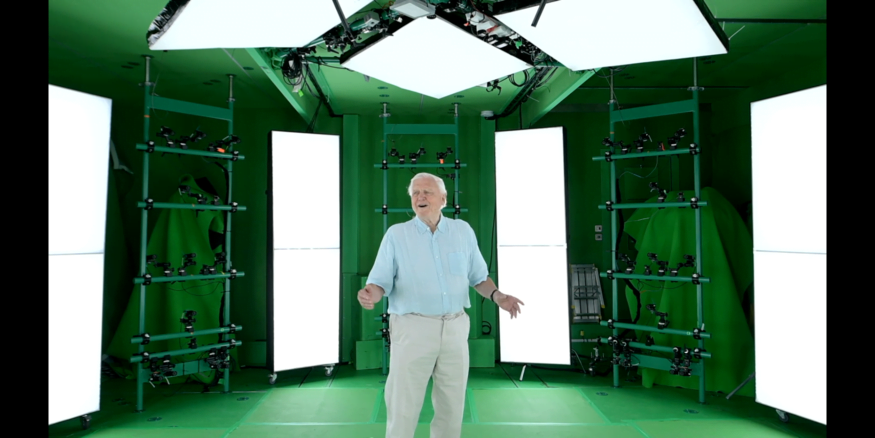 Hopefully, the next show involves cloning him.

As you walk in, they’re promising “a living rainforest complete with hundreds of tropical trees, plants and shrubs”, as you find your way to the biomes. Before you head inside, you’ll be handed a pair of headphones & a smartphone preloaded with the Green Planet AR app. Over the next 40-60 minutes, you’ll then get to explore each of the biomes with Sir David as your guide, appearing not just in your ears, but also in digital form before you.

So what about these biomes? Well, apparently your holographic guide will pop up at various points to show you where to aim your device, so as to see the plants doing their planty thing. You can expect to see balsa wood growing in rainforest biome, see a scarab beetle captured by a flower in the freshwater biome, witness shoals of Damsel fish feed between fronds of Neptune seagrass in the saltwater biome, admire a majestic Saguaro Cactus in the desert biome, visit the South African Cape in the seasonal biome, and cap it all with a look at some domesticated plants in the human biome.

Everything has been fact-checked by the people at the Royal Botanical Gardens, and it’s entirely possible that the app will become available to download for everyone soon.

So you can view it from the comfort of your own natural habitat.

NOTE: The Green Planet AR Experience is taking place from 11th February – 9th March 2022. Tickets are free, but get snapped up fast, so keep an eye on the page right HERE.

*Fun fact: Attenborough was the controller of BBC Two during the transition to colour, and he decided that tennis balls – which had all been black & white up until this point – should be yellow, so as to show up better on screen.