There aren’t a whole lot of free things to do in London.

But – unlike almost any other major city – London’s art galleries are exactly that… and The National Gallery’s a stalwart which Londoners often overlook.

Founded in 1824 after the British government bought a tidy collection of 38 pictures from banker John Julius, it now boasts London’s largest collection of European art, dating all the way back to the mid 13th century.

The building was originally erected in Trafalgar Square so that it could be reached easily by foot (presumably no one was walking from a one bed maisonette in zone 6). Having been added to as recently as 1985 when the Sainsbury Wing was commissioned, the gallery now stands at a colossal 46,369 square metres and houses 2300 paintings, so getting bored isn’t going to be a problem (assuming you like art). 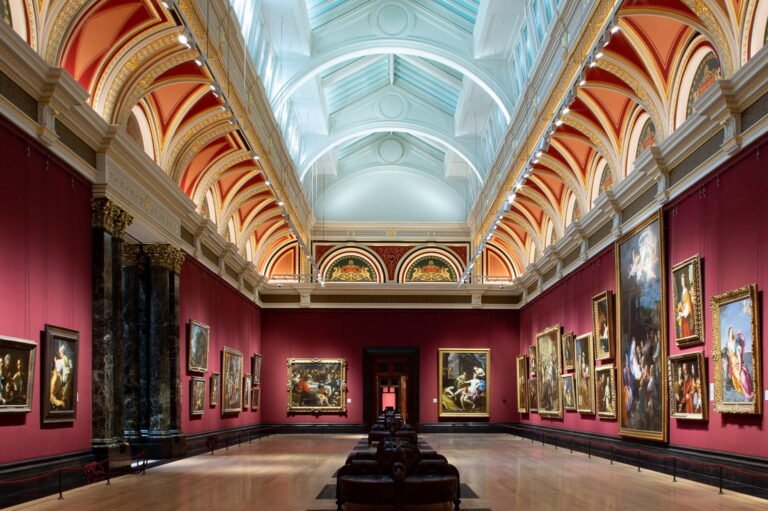 The artworks are split into four different colour coded sections, depending on time period – ranging from Raphael and Leonardo in one room, to Turner and Van Gogh in another. So start in 1200 and time travel right through to the 20th century, or, if you’re short on time (or patience), head straight for your favoured style, time frame or artist.

In addition to this, there are a number of exhibitions (some of which are free, and some which aren’t) which change on a quarterly basis. Currently on show is an overview of works by Lucian Freud from across his 60-year career; and a major show for Winslow Homer, a 19th century American artist whose fame has never really translated across the pond – and the National Gallery’s hoping to fix that.

So whether you stay for an hour, or a day…

…you’re bound to get your money’s worth.

NOTE: The National Gallery is open daily from 10am-6pm (9pm on Fridays).  For more information, and to book your timeslot for free entry in advance, visit their website here.

If you’re a fan of the arts…you should take a look at our guide to What’s On At The Best Art Galleries In London.

The Wallace Collection A big ol’ treasure chest of decorative European arts from the 14th-19th century, that’s entirely free to nose around.

Hayward Gallery Catch an exhibition at a brutalist icon on the South Bank….